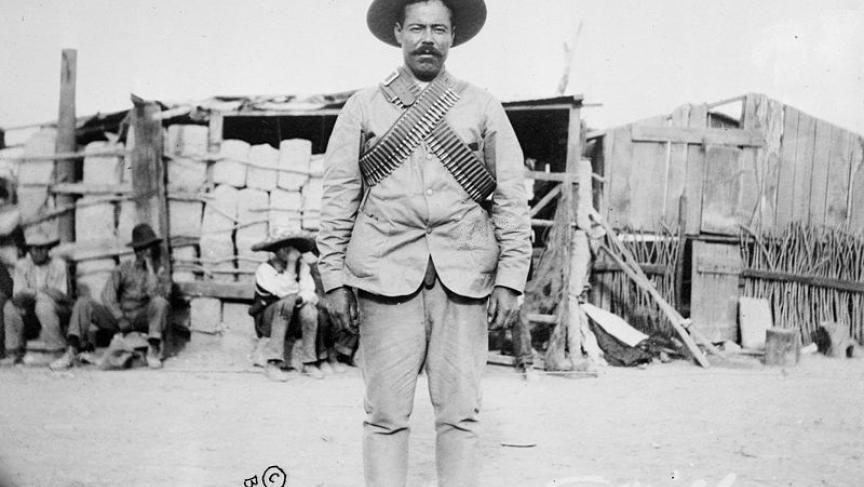 Share
We're down by the border for today's Geo Quiz. We're looking for a small town in New Mexico that's in the news. Its mayor and other local officials were arrested on charges of smuggling weapons across the border into Mexico. Now, this isn't the first time this town makes headlines. Back in 1916, it was raided by Mexican revolutionary Pancho Villa and 500 of his men. They burned part of the town and killed several people. It was the first armed invasion of US soil since 1812. President Woodrow Wilson responded by sending 10,000 troops into Mexico to capture Villa. They never did. Today, this New Mexico town is home to a "Pancho Villa State Park." I guess the locals don't hold much of a grudge. So where in New Mexico are we? Answer: Columbus, New Mexico. Monica Ortiz Uribe, of station KJZZ and the public media collaboration Fronteras, has this report: US federal law enforcement officials regularly bust people for smuggling weapons across the border into Mexico. But it's not everyday that they arrest a mayor, a town trustee and a police chief as suspected gun traffickers. That's what happened recently in the small border town of Columbus, New Mexico. Longtime residents of Columbus say smuggling is a way of life there. "They call it 'movidas' here," says Lt. Robert Odom, a reserve deputy with the Luna County sheriff's department. "And it's televisions, people, computers, drugs, guns … It's everything." Odom sits in the back seat of a Suburban wearing silver aviator sunglasses, and a tan uniform that matches the desert landscape outside. Things move back and forth easily here. From City Hall, it takes less than five minutes to drive to the border. The Mexican town of Palomas, just on the other side, is so tightly interconnected with Columbus that American school buses drive to the border to pick up Mexican school kids there. Now federal authorities claim they've uncovered a gun smuggling ring headquartered in Columbus. Among those arrested, Columbus Mayor Eddie Espinoza, City Trustee Blas Gutierrez, and Police Chief Angelo Vega. The three are currently detained without bond. They are accused of smuggling more than 200 firearms, including AK-47-type weapons and body armor into Mexico. The evidence against them is damning. The city trustee, know locally as "Woody", was allegedly receiving phone calls from an inmate inside a Mexican prison. Later the same trustee was stopped by federal agents while driving a local police vehicle loaded with weapons, which were seized. The back and forth transit between border towns is a problem all across the border that has serious consequences. "These guns are not going down there to the cartels … to shoot doves or hunt turkey," says Luna County Sheriff Raymond Cobos. "They're being used strictly to kill people and to intimidate governments at every level." More than 35,000 people have been murdered in Mexico in the last five years. In February, a US law enforcement agent assigned to Mexico was shot and killed by cartel gangsters with a gun traced back to Texas. Some of the weapons allegedly smuggled out of Columbus were later picked up at murder scenes in Mexico.