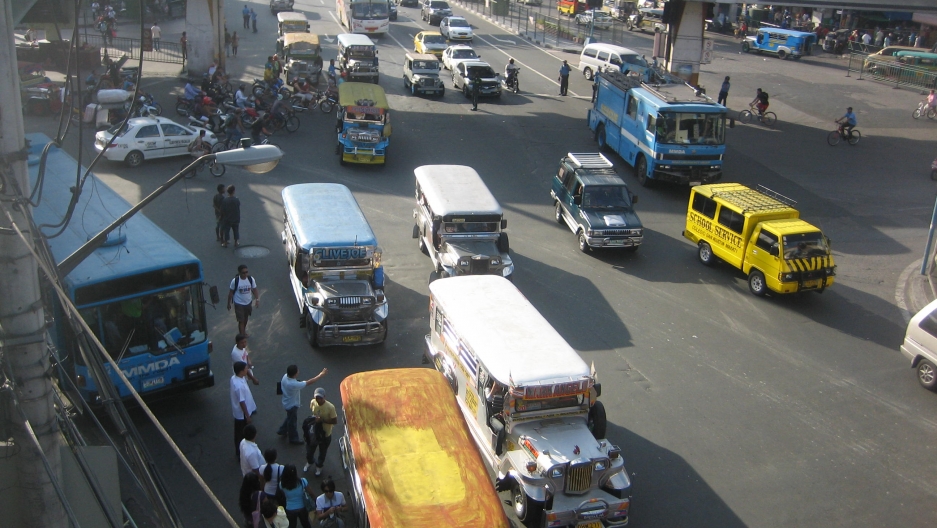 Share
By Jason Stother After a decade behind the wheel, the traffic is really getting to 33 year-old Manila bus driver Ronnie Asahan. "Yeah it's really bad in Manila, the traffic here. I'm very so tired about traffic, Asahan says as he heads out into rush hour traffic in one of Manila's busiest districts. Urban dwellers around the world may claim their own city has the worst traffic anywhere, but here in Manila, they may really have a case. Along with the usual private cars, taxies, motorbikes and trucks, the streets of the Philippines' capital are jammed with privatized buses whose drivers are paid per passenger, competing for customers as well as space on the road. The private buses weave in and out of traffic and make sudden stops so conductors can step off and call out for potential riders. Residents complain that their aggressive drivers make Manila's streets more congested and more dangerous. Now some city officials say they have a solution: female drivers. All of Manila's bus drivers are currently men. But the Metropolitan Manila Development Authority is training women for the job. Less aggressive and reckless MMDA chairman Francis Tolentino asserts that most of the accidents in Metro Manila are caused by male drivers. The fact is that there are also a lot more male drivers on the road here, but Tolentino says that based on their "attitude and latent harmonic composition," female drivers are less prone to be aggressive and reckless. Whatever her latent harmonic composition, 50 year-old trainee Olivia Pabriga says she knows her stuff. "Change oil, change tires and everything, pressure of tires, you have to know that," Pabriga says. "Before you start the car you have to check the water and the oil and what you call this, the air brake fluid." Pabriga says she used to drive a truck, so she's comfortable behind the wheel of big vehicles. She says during her first bus driving test, she remembered to do everything, including using the signal lights. "That's why they told me 'you passed the training.' Of 32 of us, I'm the only one to use the signal light," Pabriga says. Pabriga agrees with Tolentino that women drivers keep their cool better then men. Lack of law enforcement But some Manilans say the problem isn't aggressive male drivers but the lack of traffic law enforcement. "If the rules are not being followed, then still we will have traffic problems," say Father Broderick Pabillo, a Catholic bishop and government critic. Pabillo says the fact that bus drivers and conductors are paid on a quota system gives them incentive to violate traffic laws. Bishop Pabillo points out that in many other big cities, public transportation is subsidized by the state, and drivers get paid a regular salary, regardless of the number of riders. But in Manila, they get paid depending on how many passengers they get. "So naturally they will run after more people," Pabillo says. And some Manilans think women bus drivers might actually make things worse. "It's hard for them to drive a big vehicle like this," say one bus rider who believes that women are physically incapable of driving buses. Long-time driver Ronnie Asahan, meanwhile, says women can drive buses, but he worries that they tend to drive more carefully and slowly, which will only anger passengers and lead them to harass the drivers. Driver in training Olivia Pabriga shrugs off the concerns. She says whenever Filipina women try something new, they always get the same reaction from men. "They are always talking, no lady drivers in the Philippines," Pabriga says. "They always say they cannot do that, only men can do that." But once we start doing the job, Pabriga says, they'll know better. Manila's first class of female bus drivers will complete its training by the end of February.