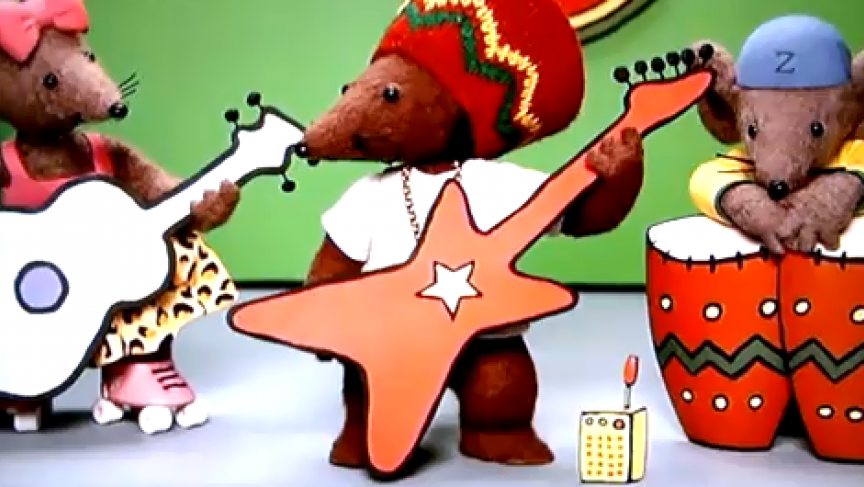 Share
By Alex Gallafent Rastamouse is, yes, a mouse. He wears a Rastafarian-style woolly hat and plays guitar in a reggae band called the Easy Crew. But when things go wrong in Mouseland, President Wensley Dale calls up the Easy Crew and asks Rastamouse for help. Producer Greg Boardman said, Rastamouse hangs up his guitar, they get on their skateboards and find out what's going on. Yes, that's President Wensley Dale, which – when written as 'Wensleydale' – is also the name of the cheese made famous by Wallace and Gromit. Like those characters, Rastamouse is brought to life in colorful stop-motion animation. The TV show, just like the book, is all about redemption. Rastamouse helps the bad guy make amends. As Rastamouse tells one miscreant, "You make tings right and everything cool." A huge hit, but not with everyone In the few weeks since Rastamouse started airing on British television it's become a huge hit. But not with everyone. The BBC, which broadcasts the show on its pre-school network, says its received a handful of complaints arguing that Rastamouse promotes black stereotypes. About a hundred others have taken issue with the language used in the show, specifically the Afro-Caribbean dialect. One of the books authors, Michael Webster, is himself Afro-Caribbean. If Michael didn't have the culture and the heritage that he brings to the show then certainly Rastamouse wouldn't exist, said producer Boardman. It's a show with multicultural appeal, but multicultural is a divisive word in Britain these days. Prime Minister David Cameron recently declared the multicultural society to have been a failure, arguing that the British state had for too long tolerated communities living in segregation from each other – instead of fostering shared values and a common culture. Caribbean and urban west London culture Cameron wasn't taking aim at Rastamouse. But still, producer Greg Boardman said his show does the opposite: it portrays no one specific community or geography but instead reflects the author's experience of the world. And their experience of the world is partly Caribbean and partly urban west London he said. The British actor who provides the voice of Rastamouse, Reggie Yates, is not of Caribbean descent; his parents came from Ghana. Yates recently offered a defense of multicultural programming in a video taped for an awards ceremony. "It's incredibly important for not just minorities but everyone to have groundbreaking shows and shows that reflect a multicultural Britain," said Yates, "because that way we all have the opportunity to understand each other just that little bit better." Caribbean culture is deeply embedded in the UK. Waves of immigrants arrived in Britain from Jamaica and elsewhere in the wake of the World War II. That didn't happen to the same extent in the United States. So if and when Rastamouse makes it to the US, it's unlikely that the characters will sound the same. Boardman says what's important is not the specific accent or dialect. It's the stories and the attitude of Rastamouse that count. And those things aren't ever going to change.