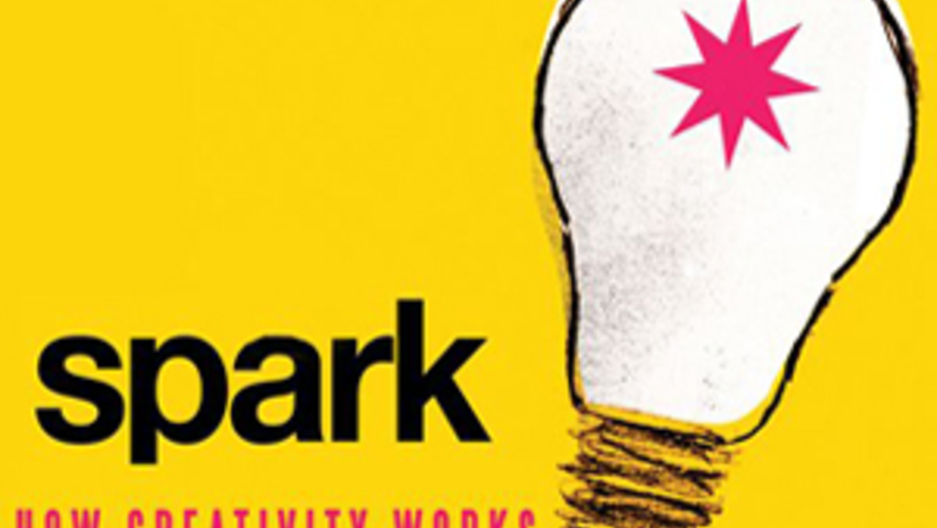 'Spark' explores the creative processes and inspiration of artists and writers. (HarperCollins)

Use audio player above to listen to Studio 360 interview with Pulitzer Prize-winning playwright Lynn Nottage, one of the artists featured in "Spark."

Inspiration is elusive and often unexpected, and this is exactly what the new book, "Spark," uncovers. Written by Julie Burstein, a long-time producer of Studio 360 and derived from the show's interviews through the years, "Spark" gives readers an inside look at the creative processes and inspiration of some of today's greatest filmmakers, writers, musicians and artists.

Painter Chuck Close said he started doing portraits because he thought he could breathe new life into a dying genre. Over 30 years later, Close is one of today's most admired portraitists, known for his huge, meticulous paintings of faces -- 9 foot, looming images of himself, and of friends such as the composer Philip Glass and the late painter Robert Rauschenberg.

For writer Isabell Allende, a ritual is what helps her get started on a new book. Every year, on January 8, Allende sits down to start a new book, whether she's finished a previous one or not.

Artists sometimes use the stuff that surrounds them in surprising, sometimes scary ways. Ben Burtt, sound engineer for "Star Wars," is inspired by everyday objects. Burtt found the iconic light saber sound in the hum of his TV set. He says, it was "the kind of thing you normally would not want in your recording, you would reject it." But he was able to hear the sound in a different way. "I said, 'Oh that hum sounds dangerous.'"

Playwright Lynn Nottage, whose Pulitzer Prize-winning drama, "Ruined" is set in the Democratic Republic of Congo, says the buoyancy and optimism of her characters belies the gruesome and horrific premise of her story. Her work with Amnesty International exposed her to the lives of people whose stories she wanted to tell.

"I was really interested in what happens to the human spirit," Nottage said. "How does love continue to flourish in the face of such ugliness and brutality?"

Richard Ford won both the Pulitzer Prize and Pen/Faulkner Award for his novel, "Independence Day." His inspiration comes from events and things he's experienced throughout his life. But he didn't think about writing until he learned to appreciate all that language can do. "When I became attuned to it, I realized that it was there to give me pleasure and to cause me to know the otherwise inexpressible life."

In 2009, the album "Raising Sand" swept the Grammy Awards, grabbing top honors Album of the Year and Record of the Year. It all started when Robert Plant, who helped define rock-and-roll in the 1960s and 70s with Led Zeppelin, called up Alison Krauss. He was searching for a new musical adventure, and Krause came up as a suggestion from a friend. Their partnership inspired both artists to new musical heights.

"You don't know until you stumble across that word from the 1840s, that real-life person, that anecdote, whether it's going to be inspiring to you or not," said Studio 360 host Kurt Anderson. "But something just happens: "You know it when you see it."

Get more information about the book on the "Spark" page on Amazon.com.

Read an interview with Kurt Andersen and Julie Burstein on the PBS Newshour website.