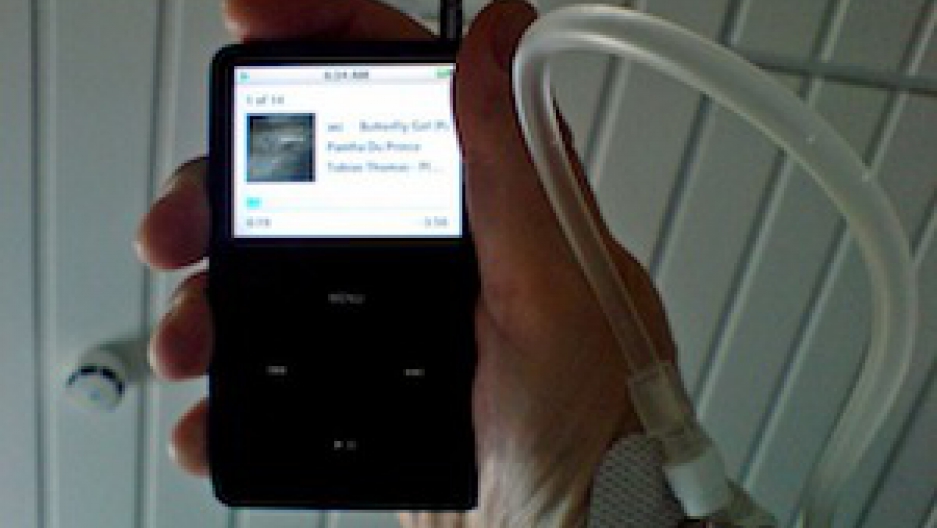 An ipod in a hospital (Image by Flickr user DESQie (cc:by-nc-nd))

This story was originally covered by PRI's Studio360. For more, listen to the audio above.

After suffering extreme burns from a barbeque accident, Clifton Dobbs was taken to Cleveland MetroHealth Trauma Center for treatment. The burn unit at the center, run by Dr. Richard Fratianne, has been experimenting with music therapy to mitigate pain.

"We chose burn patients because their pain is so severe and their anxiety is so high, that we thought if we can prove that music therapy can actually have a positive effect in these patients, then we can be rest assured that it's going to work in every patient," Fratianne explains.

Burn patients go through excruciating treatments multiple times every day, and although pain medication can lessen the severity, it is impossible to dull it to a point of tolerance. Dobbs says that morphine did little to help his pain: "It was like they had nothing to deaden the pain, in my view, you know … it was just, I mean, maybe it did. Maybe if you went in with absolutely nothing it would be much worse, I can't imagine it, but to me, I could feel everything."

A music therapist began to visit Dobbs during his debriding, dressing changes and ointment applications. Dobbs describes his experience: "I started singing along with her and it really did take your mind off the immediate -- what the nurses were doing. And it was a relief, and it was a great thing to have, you know? Instead of just sitting there and laying there waiting for them to get done."

Dr. Fratianne explains the theory behind why music therapy works:

Music requires an integration of many parts of the brain.  There's the motor part that is the physical response to playing or tapping to the rhythm of the music and that sort of thing. But then there's the limbic system –- the emotional response that comes to hearing music, that brings forth feelings and thoughts and ideas, and … but also there's rhythm, there's tempo, there's melody. All of these things have to be integrated at the same time to appreciate music. It's amazing how the brain can do this.

By involving the patient in such a complex activity, the burn unit hopes to redirect the brain from the current experience. The doctor and his team are measuring the program's success by following whether the patient's stress hormone levels decrease, and their initial studies are showing positive results.