Last week on the show, we heard aboutMark Twain's new autobiography, released (at Twain's expressed direction) a century after his death: "It has seemed to me that I could be as frank and free and unembarrassed as a love letter if I knew that what I was writing would be exposed to no eye until I was dead and unaware and indifferent." It's kind of a doorstop.Robert Hirst, one of the book's editors, told Kurt that the volume -- which is only one of three -- is about as long as they can get it and still be able to bind the thing.

If you don't love Twain enough for 743 pages, here's a treat.

Ward Sutton boils it down to just 19 frames -- it's Mark Twain, the graphic novel. Sutton strips the book down to its essentials, retaining strong doses of Twain's wry sense of humor, and injecting some of his own. 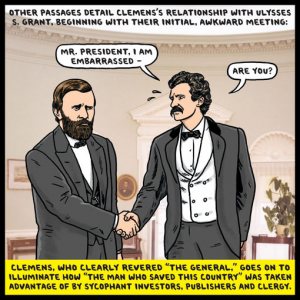 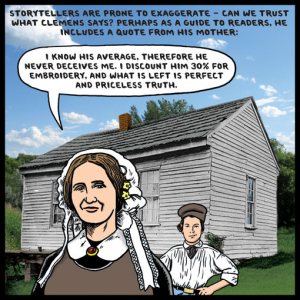 Sutton's column "Drawn to Read" appears monthly in the Barnes & Noble Review. He covers a variety of books in a variety of styles: from a psychedelic take on Thomas Pynchon's Inherent Vice to The Letters of Vincent Van Gogh rendered in tongue-and-cheek brushstrokes. If only all reviews could be as clear and colorful.