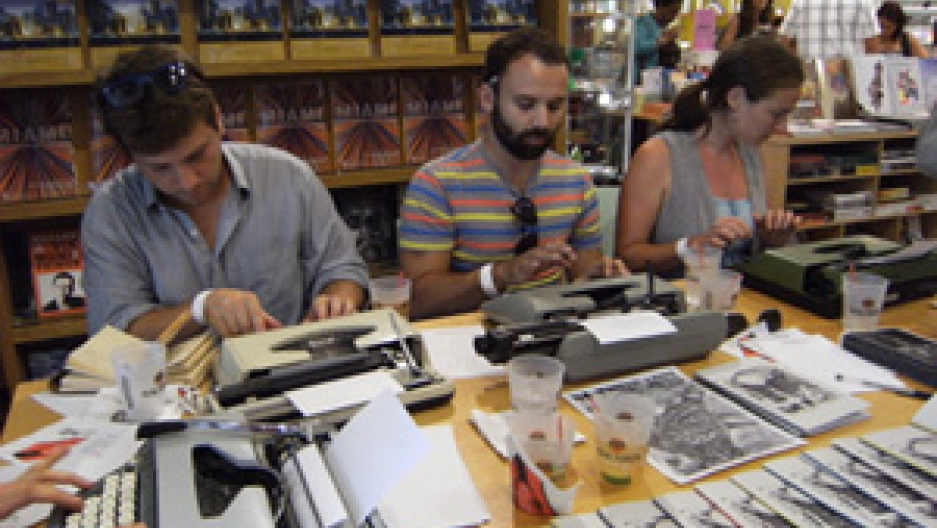 April is National Poetry Month, but a group called the Miami Poetry Collective has been trying to make poetry an every day part of life for those of us who don't know a verse from a stanza.

About once a month, they set up shop on a Miami sidewalk with a clackety-old typewriter and deliver fresh poems on the spot to anybody walking by.

"We are the Miami Poetry Collective and we're selling poems tonight," says a Poem Depot representative to a potential customer. "Subject of your choice, style of your choice. Starting at two bucks, and you get a free journal with it. Anything more than two bucks you're prepared to us, we'll happily accept."

The customer says she'd like her poem to include "birds" and "Fresno." The poet types out a poem for her.

"It's the idea that everybody will have this kind of very simple, inexpensive, fun, arts transaction," says the appreciative customer. "It's almost like I have the impulse to write, but I really can't write. I'd like to express something, so I'll hand it over to you and you'll express it, but differently than I ever would have."

Another customer throws out "horseradish" and gets her "Ode to Horseradish"  for eight dollars.

Ode to Horseradish
It's like wasabi, or a sucker punch
Once it leaves its destination, it takes a freight train straight to your eyes
But like that hot guy, the one living on the other, forgets to call
Though the getting hurts, it sure is good.

The Miami Poetry Collective's website says the group "was founded by Campbell McGrath at a plastic table in front of Zeke's Roadhouse Bar in the winter of 2008."

View video and slideshow of the Miami Poetry Collective and Poem Depot on Studio360.org.