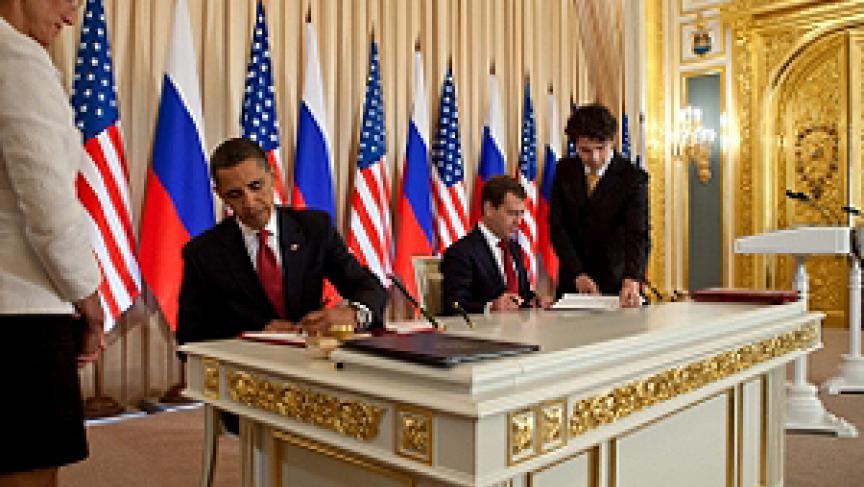 President Obama and his Russian counterpart, Dmitri Medvedev made history last week. At a ceremony in Prague, the two leaders signed a treaty to significantly reduce the nuclear arsenals of Russia and the United States. The treaty calls for a 30 percent cut in the number of nuclear warheads deployed by the two nations.

President Medvedev said the deal will lead to a higher level of cooperation between Moscow and Washington. And President Obama said that could mean more weapons cuts in the future.

"While the new START treaty is an important first step forward, it is just one step on a longer journey. As I said last year in Prague, this treaty will set the stage for further cuts. And going forward we hope to pursue discussions with Russia on reducing both our strategic and tactical weapons, including non-deployed weapons."

Dmitri Trenin, with the Carnegie Endowment for International Peace in Moscow, says even as Russia agrees to reduce its arsenal, it has reasons to hang on to its nuclear warheads.

"You must appreciate that unlike the United States, the nuclear arsenal is just about all Russia has. It has a conventional military which is pretty antiquated. Russia, in many ways, has never been, at least not recently, so backward and so disorganized ... and poorly equipped at the conventional level as it is now.So Russia depends on not just for its status, but also for feeling of security on the continued nuclear deterrence."

In terms of creating a real strategic relationship between the US and Russia, Trenin adds, the treaty changes little.

"You still have an essential victorious relationship based on the idea of mutually assured destruction. And I think that it's high time, 20 years after the end of the cold war, that we practically started looking for a new basis for the US-Russian strategic relationship."

But, the START treaty is a first step in improving the relationship between the two countries, and serves diplomatic and domestic goals.

"The Obama administration, which had come up with this idea of a reset, wanted to put Russia from the column called liabilities in to the column called assets. And I think that the Russian leadership believes that now that Russia is in very serious need of domestic modernization -- economic modernization is the slogan of the Russian leadership these days -- they can ill afford to have a hostile or even not fully friendly relationship with the United States."

The BBC’s James Robbins, who witnessed the treaty’s signing last week, says the relationship between the heads of state of the two countries have certainly improved.

"I have to say the body chemistry in the room was pretty remarkable. They’ve both, I think, made clear the really rough patch in relations during the end of the Bush era, and indeed running into this presidency of President Obama, seems to be put behind them."