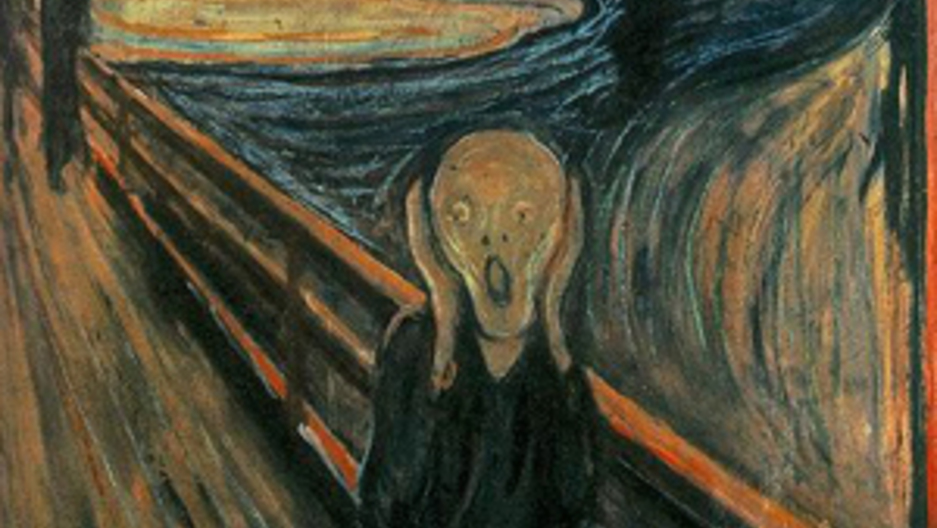 "The Scream" by Edvard Munch.

In the official Hollywood template, you pretty much can't be a genius without also being nuts. Classic examples: Kirk Douglas as Vincent Van Gogh in "Lust for Life," or more recently "The Hours," with Nicole Kidman as Virginia Woolf who in real life probably suffered from manic depression.

Are highly creative people more likely to be mentally ill? "Studio 360's" Tamar Brott tried to separate the truth from the myth in this report:

Los Angeles-based psychiatrist Dr. Barry Panter has been hosting his "Creativity and Madness" seminars for the past 20 years. Mostly they're attended by people in the medical profession.

The titles of some of the presentations have been "Janis Joplin, Fame Drugs and the Quest for Serenity" and "Iggy Pop, Narcissist, Shaman and Wounded Child."

No one has ever been able to scientifically define what creativity is, but there are some basic schools of thought about where it comes from. The most romantic being that it's borne of pain and can't survive without it.

"An example of this is the artist Edvard Munch," said Dr. Panter. "Munch had a very chaotic life -- he was an alcoholic, he got into rages, he shot somebody ... and with all of his chaos, he was creating masterpieces. That picture of 'The Scream' was created during that chaotic period in his life.

"Well, he got into therapy, and the therapy was 'successful' in that he calmed down and he lived a very mundane life. His creativity was gone."

Among the less romantic theories is that it's an occupational hazard -- especially if you're a poet.

A few years ago, Dr. Kaufman got a lot of attention for a study he conducted showing that famous female poets were more likely to commit suicide than other famous artists. It turns out there's an entire body of scholarship devoted to searching for signs of mental illness in famous dead artists.

Dr. Kaufman said he and other scholars have conducted "... historial metric research, where [we've] read biographies of eminent people and coded them for signs of mental illness, which could include suicide attempts, hospitalizations, things like that."

"And what's striking is the literature is quite consistent across all different methodologies, across different kinds of populations, which is to say a very much increased rate of mood disorders, particularly bipolar disorder, but also depression in highly imaginative artists and writers," said psychologist Kay Redfield Jamison.

In 1993 Jamison, who is bipolar herself, publish the groundbreaking book, "Touched with Fire," in which she documented bipolar symptoms in an exhaustive list of artists. Among the artists thought to be bipolar are William Blake, Jack London, Herman Melville, Virginia Woolf and Earnest Hemingway -- to name only a few.

"The human brain actually becomes more creative during mild mania," said Jamison, "Mania, like many drug-induced states is a disinhibiting state, so that people get uninhibited."

She says that mania also increases output, "One of the things that happens when people get manic is that they have a sense of urgency -- to paint, to write poetry; but to act upon that as well. And that's an enormously important thing, because ... an awful lot of people have ideas, but they don't necessarily execute those ideas."