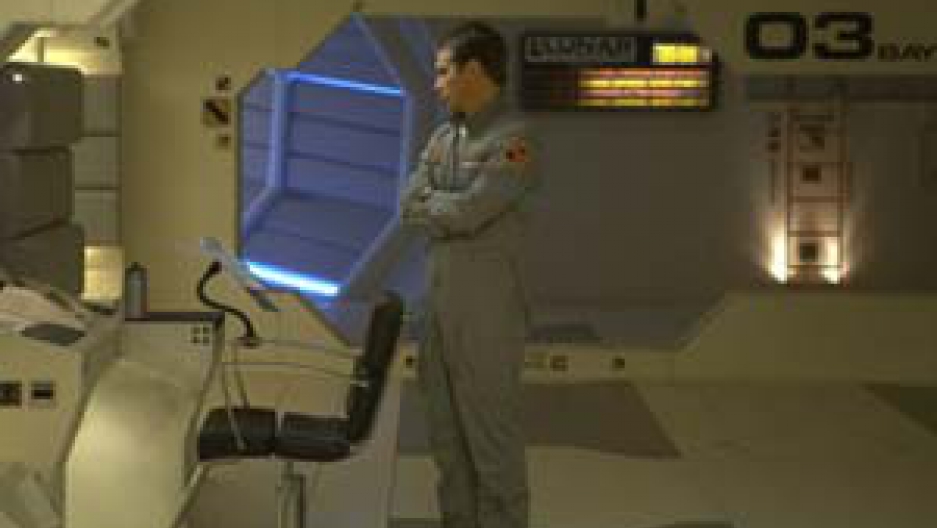 A scene from "Moon" with Sam Rockwell.

"Moon"  opens this weekend and stars Sam Rockwell as a astronaut,/industrial supervisor who works on a lunar mining base. He's completely alone; his only companion is a friendly, nosy robot. When the movie opens, Sam is just about to finish his three-year assignment and return to his family on earth. That's when it gets complicated.

Director Duncan Jones, who happens to be the son of David Bowie, talked with "Studio 360's" Kurt Andersen about his first feature film and the appeal of retro sci-fi.

Jones' "man-alone-in-space" idea has been explored before, most notably in Stanley Kubrick's "2001" -- he explains why he wanted to revisit this idea: "Both myself and Sam were huge fans of films from that era, particularly films like "Outland" and "Silent Running," and Ridley Scott's "Alien," which for the first two-thirds of it is not really a horror film until that final act.

"And really what we wanted to do was go back to those kind of films where you have sort of a blue-collar character, sort of a proper human being, and try and round them out as a person. And the science fiction really becomes changing one little thing about their lives, or putting them in an alien environment, a science fiction environment and seeing how they maintain their humanity or how their humanity is slowly chipped-away at because of the setting that they're in."

Sam Rockwell's companion on the lunar base is a robot named "Gerty," voiced by Kevin Spacey, who sounds very much like another computer in an earlier film. Jones explains: "If you're going to have a machine or robot in a science fiction film, and it's going to have a human voice, people are going to immediately make the comparisons with HAL. So I had two ways to play that: I could either pretend that never happened, ignore that fact; or we can play with that, play with the idea that the audience are going to bring a certain amount of expectations and assumptions, and then obviously the surprise is that Gerty ends up being a very different personality than HAL was."

Jones has been fascinated with science fiction throughout his life -- his university thesis was about artificial intelligence and robotics, and then he went on to study philosophy -- this laid the groundwork for his new film: "I've always been fascinated in the idea of sentients, and what consciousness is -- what in philosophy is called the mind-body problem of whether there is a soul or not. And I think that was always something which I found fascinating and wanted to investigate, and see whether you can actually imbue something which is not human with sentience."