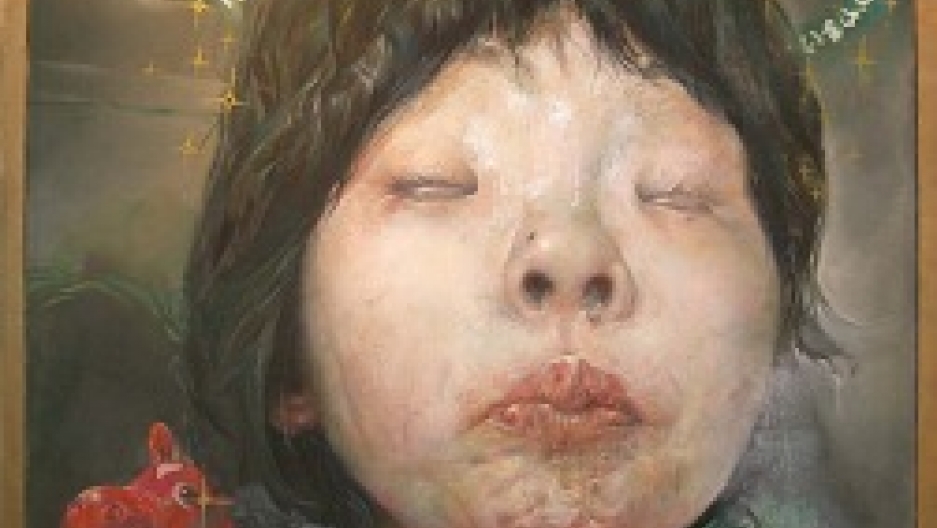 Today I joined Lisa Katayama for her interview with Erina Matsui, a 24-year-old artist who's already gotten the attention of Takashi Murakami and other art world big-wigs. Erina paints playful and surrealistic self-portraits, which she says should make people laugh. So as we walked into the Yamamoto Gendai galley, I have to say I was a bit shocked to be greeted by photographs of guts being ripped out of cows. (The artist is Hermann Nitsch, if you're up for being disturbed.) Kudos to the gallery for variety, I guess.

Anyway, once we went into the other room, Erina charmed us with her humility and quirkiness. She said her work is influenced by Dali and Rembrandt, but she also likes to incorporate characters and creatures from toys and manga.

One image that shows up in a few of her paintings is an alien-looking amphibian, which I thought was her own creation. Then she said she had three of them as pets. (Named Napoleon I, II and III.) I asked, wait, they're real? Yes, she said. It's an axelotl. People used to tell her she looked like one, so she felt compelled to paint it. Am I the only one who hasn't heard of this animal? Apparently they come from Mexico and were all the rage here a while ago.

I don't know how I'd feel if my friends compared me to a little critter like that, but she embraced it.

When we were wrapping up the interview, I had to ask her one last question, which was what did she think of the art in the other room? Scary, she said. But she understands if the guy's got a vision - that's his prerogative.

She ended up joining me and Lisa for lunch and was kind enough to ride back with me on the subway. A remarkably sweet and humble young gal for someone who's bound to make a big splash very soon.