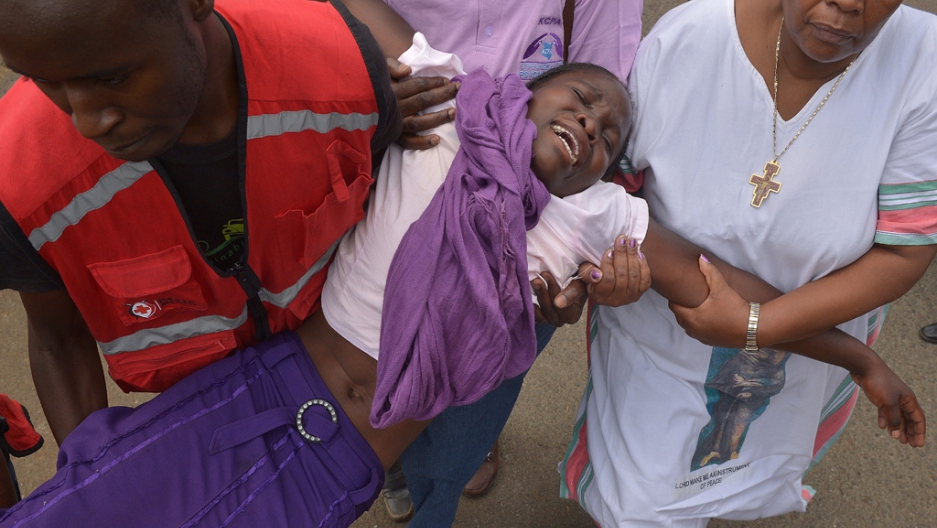 Members of the Red Cross help a woman overcome after seeing the body of a relative killed by Somalia's Al Shabaab Islamists at during the siege on the Garrisa Campus University, at the Chiromo funeral parlor in the Kenyan capital, Nairobi, on April 3, 2015. r loved ones.
Credit: TONY KARUMBA
Share

GARISSA, Kenya — Somali militants vowed on Saturday to wage a long war against Kenya and run its cities "red with blood" after the group's fighters killed nearly 150 people during an assault on a Kenyan university.

Kenyan officials said they had arrested five men in connection with Thursday's attack by Al Shabaab gunmen at Garissa university, 200 km (120 miles) from the Somali border.

The raid has put Kenya on heightened alert and spooked Christian congregations, horrified by survivor tales recalling how the Islamist militants had sought out Christian students to kill, while sparing some Muslims.

In a message directed at the Kenyan public, the Al Qaeda aligned group said the raid was revenge for Kenya's military presence in Somalia and mistreatment of Muslims within Kenya.

"No amount of precaution or safety measures will be able to guarantee your safety, thwart another attack or prevent another bloodbath from occurring in your cities," the group said in an emailed statement received by Reuters in the Somali capital.

It said it would run cities "red with blood", adding: "This will be a long, gruesome war of which you, the Kenyan public, are its first casualties."

The death toll in the Garissa blitz was put at 148. Four attackers also died and the authorities put their bullet-ridden, swollen bodies on display on Saturday, hoping that the hundreds of locals who viewed the corpses might be able to identify them.

The Interior Ministry said three men thought to have coordinated the assault were arrested while trying to flee to Somalia. They were all Kenyans of Somali origin, as was another of those detained, who was a security guard at the university.

A Tanzanian man named as Rashid Charles Mberesero was also arrested at the university.

"We suspect the Tanzanian, who was hiding in the ceiling, was one of the combatants. He had ammunition with him when he was arrested on Thursday night," ministry spokesman Mwenda Njoka told Reuters. "We suspect the guard facilitated the entry (into the university)."

The Kenya Red Cross said it had found a woman survivor on Saturday in the university, two days after the siege ended.

The bloodshed piled further pressure on President Uhuru Kenyatta, who has struggled to stem the violence that has dented Kenya's image and ravaged the country's vital tourism industry.

The timing of the attack has been embarrassing for Kenyatta, who a day earlier had berated Britain and Australia for putting out travel warnings over security threats to the country.

Local media, whose coverage has been uncharacteristically tame due to a new law that forbids them from showing images that would create "fear" among the public, have been skeptical about the government's latest promise to halt the slaughter.

"The usual assurances that security is being beefed up and patrols intensified have become hollow," the biggest-selling Daily Nation newspaper said in an editorial comment.

Foreign media published a photograph they said was taken by Kenyan police that showed more than 70 bodies, lying face down in a university hallway, each apparently shot in the head.

More than 400 people have been killed by Al Shabaab on Kenyan soil since Kenyatta took power in April 2013, including 67 people who died in September of that year during a siege on an upmarket shopping mall in the capital Nairobi.

The suspicion that the gunmen were helped by Kenyans will put pressure on the Muslim community and highlight the state's failure to stop radicalisation among its Muslim population, who make up about 10 percent of the 44-million-strong population.

Diplomats and analysts have criticised what they see as a heavy-handed approach by Kenyan police, saying tactics such as indiscriminate mass arrests of Kenya's Somali population plays into Al Shabaab's hands and fuels resentment among Muslims.

Kenya said Mohamed Mohamud, a former teacher at a Garissa madrasa, was the attack mastermind, and offered a 20 million shillings ($215,000) reward for his arrest.

Garissa residents have reacted with fury to the massacre, and question why only two security guards were on duty despite warnings that Al Shabaab was planning to target a university.

"You can't say this will be the last attack in Garissa," said construction worker Tobias Ayuka. "We are very worried."

Fearful of further assaults, owners of malls in Nairobi and the port city of Mombasa have sought greater government protection and ratcheted up private security.

"We are getting more armed police and plain clothes police officers. Everywhere is on heightened alert right now," said the owner of one high-end Nairobi mall popular with Westerners.

"Officers are everywhere both on the ground and in the air. We have two helicopters that will be patrolling the entire coastal area," Robert Kitur, police chief for Kenya's Indian Ocean coast region, told Reuters.

Garissa Governor Nathif Jama said the region has a number of security "soft spots", including schools and hospitals, and asked for more boots on the ground in his county, which forms part of Kenya's porous 700 km border with Somalia.

Jama said Garissa University was shut indefinitely and some students said even if it reopened, they would not return.

"When I just manage to get out of this place safely, I'm telling you I'll never come back," said Sheillah Kigasha, 20, who survived Thursday's rampage by hiding under a bed.

(By Edith Honan. Additional reporting by Joseph Akwiri in Mombasa and Feisal Omar in Mogadishu; writing by Drazen Jorgic; Editing by Crispian Balmer)