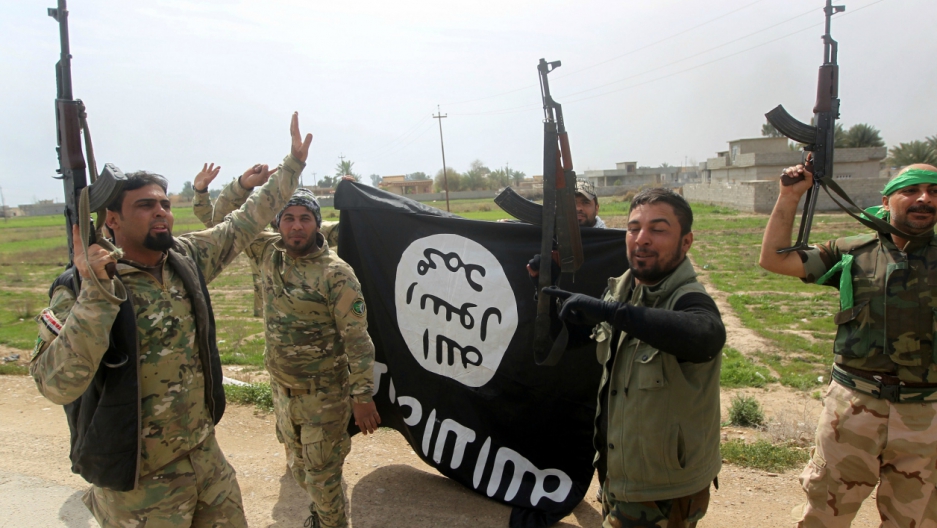 Members of the Iraqi paramilitary Popular Mobilization units celebrate with a flag of the Islamic State after retaking the village of Albu Ajil, near the city of Tikrit, from the jihadist group earlier this month.
Credit: AHMAD AL-RUBAYE
Share

CAMBRIDGE, Massachusetts — The current US strategy against the Islamic State (IS) is precariously balanced between two interdependent components. One is the application of powerful military force by us, explicitly limited. The second is the nations of the region, with the most at stake, taking responsibility for fighting IS on the ground.

This pragmatic model will only work with strict restraint on the part of the US not to become more directly involved militarily. Such a measured policy will be at risk in a time of political disorder as the US careens into its 20l6 presidential campaign.

Our present approach uses our most effective military tools. It uses air power, selected special operations on the ground and military advisers providing training and back-up support for Iraqi and other ”coalition” personnel. It avoids roles that would expose our weaknesses.

This strategy allows us flexibility and selectivity. It limits casualties. It enables us to avoid being pinned down defending territory, while concentrating on preventing IS from developing the capacity to attack the United States.

The current policy also avoids getting trapped in a sprawling land war of indeterminate length that would be fought amid an alien culture on someone else’s homeland and at unacceptable cost to us. And it keeps the focus on mobilizing indigenous military forces for their own cause.

In order to design and execute any viable policy to defeat IS, the US must first rid itself of the underlying assumptions that a near-term solution is at hand and that we are capable of successfully conducting it.

In spite of the arrogance and illusion that have not served us well, the US can play a uniquely valuable role, if we don’t try to do too much. This calls for both action and restraint.

The issue of US “boots on the ground” in Iraq and Syria will be a focus in the forthcoming national political discussion over the congressional war powers authorization. It certainly will have its place in the extended presidential campaign to follow. Given the disastrous consequences of our decisions over the past 10 years in Iraq and Afghanistan, it is almost incomprehensible that there would be a drumbeat for a repeat.

Such a deployment would be severely damaging to the US. It would eliminate the key benefit of our balanced cooperative strategy — native forces taking on the battle against IS instead of us.

The countries of the region will not accept responsibility with their own boots as long as we’re providing ours. IS victims will not seriously commit to resolve their deep and ancient conflicts as long as they can both rely on and blame the US. We would again become the hated “occupiers,” undermining our own efforts on the ground. That’s a problem that can’t happen if we aren’t there trying to defend territory ourselves.

Sending US ground troops to the Middle East would be the move that makes the war effectively ours. It would give IS a perfect Western Satan — obscuring the fact that the group is primarily fighting its own Muslim and Arab brethren. We would put ourselves in the middle of a huge, interminable Middle East religious civil war. We would be helping to escalate and perpetuate the conflict, which surely would please IS.

With the presidential election looming, the discussion in the US about IS will likely be neither nuanced nor enlightened. Because the 2016 presidential campaign is underway, we are already experiencing natural partisan and ideological fighting — rather than enlightenment and common understanding — over the best course for the nation.

We speak of American “exceptionalism,” while we resent and resist the limitations of our global power. Political anxiety and disorientation do not advance strategies of patience, long-term projection and imagination. The more likely attitude is reaction, narrow-mindedness and impatience — even jingoism.

Such a political climate may lead to arguments encouraging more military action and foster a “boots on the ground” mentality. A severe need remains for thorough, clear-eyed assessment of the true consequences of such a hawkish expansion of US military involvement.

Our challenge is to be flexible and resourceful in troubled and dangerous conditions. It is self-defeating to proclaim that we will do more than we really should. President Obama, who’s had trouble with the red lines he draws, should in this case have stopped at a promise to disable rather than destroy IS.

Jonathan Moore is an associate at the Shorenstein Center on Media, Politics and Public Policy at the Harvard Kennedy School and is a member of GlobalPost's editorial advisory board. He was formerly executive assistant to the US Secretary of Defense and a US ambassador to the United Nations.