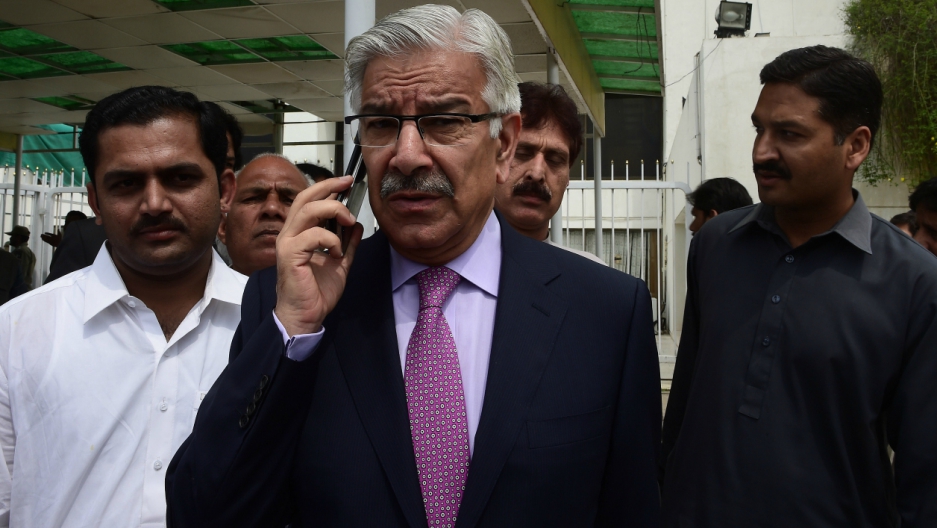 Pakistani Defense Minister Khawaja Asif (C) speaks on the phone as he leaves parliament after the start of a special debate on whether to join the Saudi-led military intervention against Shiite Houthi rebels in Yemen.
Credit: FAROOQ NAEEM
Share

ISLAMABAD — Saudi Arabia has asked Pakistan for military aircraft, warships and soldiers, Pakistani Defense Minister Khawaja Asif said on Monday, at the start of a parliamentary debate on whether Pakistan should get involved in a Saudi-led campaign in Yemen.

Sharif has in turn hedged his bets. He has said repeatedly he will defend any threat to Saudi Arabia's "territorial integrity" without defining what action such a threat might provoke.

"Saudi Arabia has asked for combat planes, warships and soldiers," Asif, who also visited Turkey to discuss Yemen, said without specifying where Saudi wanted them deployed.

"They're unlikely to be part of any meaningful action inside Yemen," he said. "Maybe they will reinforce the border."

But joining the Saudi-led coalition could inflame a sectarian conflict at home where about a fifth of the population is Shiite and attacks on Shiites are increasing, further destabilizing the nuclear-armed nation of 180 million people.

Pakistani intervention would probably also anger Shiite power Iran, which shares a long and porous border in a region roiling with its own separatist insurgency. Pakistan's other main borders are with arch enemy India and Afghanistan, where Pakistani troops are conducting anti-militant operations. The Iranian foreign minister will visit Pakistan this week.

Pakistan has a long record of contributing troops to UN peacekeeping missions, but public opinion is also largely against intervention in any Saudi-led action in Yemen.

"It must be remembered that Pakistan is not Saudi Arabia's handmaiden, doing its bidding at the flick of a wrist," said a Friday editorial in the Express Tribune.

Many analysts say the military, which has ruled Pakistan for more than half its existence since independence, has the final call. The generals have been silent.

Pakistan has nearly 1.5 million active soldiers and reserves, but about a third of those are tied up with operations along the Afghan border. The bulk of the remaining forces face off with nuclear-armed India. Others are executing the government's new counter-terrorism plan.

Even though Saudi Arabia is a "special friend" of both the government and the military, Pakistani intervention in Yemen might be unwise, said retired Major General Mahmud Ali Durrani, a former national security adviser.

"If it was to defend Saudi Arabia against aggression, in spite of our commitments, I think we would stretch to sending troops," he said. "To send our troops to a third country — I think that would be foolhardy."