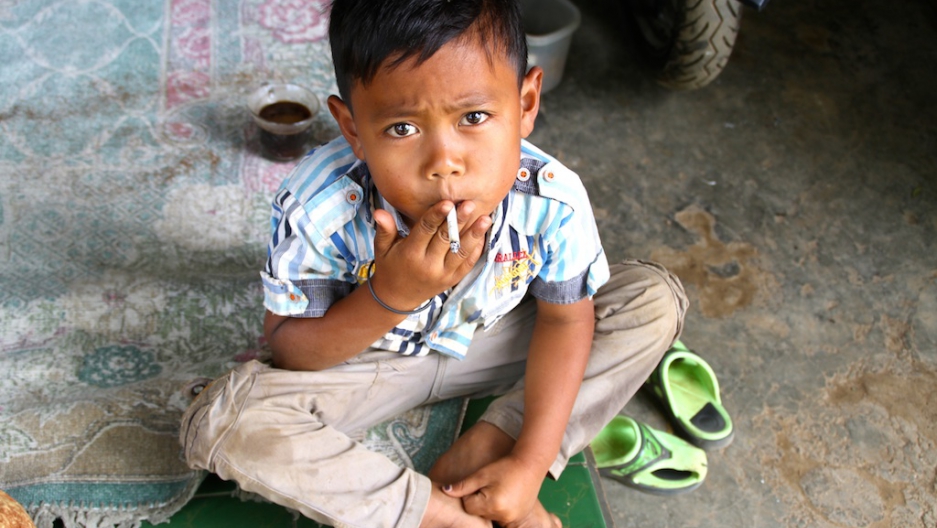 Dihan, 6, has cut down to just four cigarettes a day from his usual two packs a day. And his parents are proud. (Clea Broadhurst)
Share

CICAPAR, Indonesia — Dihan’s family is very proud of him. Until just a few months ago, Dihan was smoking up to two packs of cigarettes a day, but he has managed to cut down.

“He was sick, he was coughing a lot, and the doctor said he had to quit. He’s been trying hard, and now he just smokes five a day,” said his mother, Sulawati.

Dihan is six and has been smoking for years.

Dihan’s parents say they were shocked when they first realized he wasn’t buying candies but cigarettes with his pocket money. But they didn’t act on it.

“If I grabbed the cigarette from him he would just start crying,” explained Iyan, Dihan’s father. Dihan now often smokes with his father in their tiny one-bedroom house.

Iyan is a tobacco farmer, and a chain-smoker himself. Under the house’s porch, he keeps four massive bags of tobacco, about 100 kilograms in total, for his personal yearly consumption. Dihan is allowed to have some, and has become very good at rolling his own cigarettes.

Activists blame the Indonesian authorities for this lack of awareness of the dangers of tobacco. A few years back, a video of an Indonesian toddler smoking 40 cigarettes a day went viral worldwide, and prompted heartfelt official declarations in the country.

But not much has changed. In fact, things are getting worse. Lisda Sundari, deputy director for education and advocacy at the local children NGO Lentera Anak, said the number of children aged 10 to 14 who smoke has doubled over the past 20 years, and has at least tripled for 5- to 9-year olds.

Sixty-seven percent of Indonesian men and 41 percent of 13 to 15 year-old boys smoke. Indonesia is one of the few countries in the world that hasn’t signed the World Health Organization’s Framework Convention on Tobacco Control. This means cigarettes are still extremely cheap (about one dollar a pack) and cigarette advertising is not forbidden.

Anti-tobacco activists celebrated last June when the government started require cigarette companies to include graphic health warnings on their packs. But it was a minor victory. Cigarette advertising is still absolutely everywhere here.

The ads are on Television, in newspapers and magazines, and plastered on trees lining the roads. Indonesian cities are choked with giant billboards promising “pleasure, style and confidence.” Cigarette companies sponsor almost all of the country’s concerts and sports events, not to mention refugee camps.

Sundari said cigarette advertising is “really massive,” and has succeeded in framing smoking as cool and popular.

Masli, who has worked on Philip Morris advertising campaigns in the past, said cigarette companies will often distribute free cigarettes during events they sponsor, even to children. “They don’t really care about their age,” he said.

While selling cigarettes to minors is officially forbidden, Sundari said it is never enforced. In Dihan’s tiny village here in West Java, the kiosk’s owner had no problem admitting that Dihan generally comes three times a day for “kretek,” which are clove cigarettes, a favorite among Indonesian smokers. He usually buys a single cigarette, which he gets in exchange for a 500 Rupiah coin. That’s about 5 cents.

Activists have repeatedly asked for an increase in the price of cigarettes but reform is hard to achieve — Indonesia is one of the biggest tobacco markets in the word, cigarette companies are powerful, and politicians easily corruptible.

And now that Indonesian President Joko Widodo has launched a fierce campaign against narcotics, and made the execution of drug dealers a priority, some find the double standard hard to swallow.

“There were 240,000 people in Indonesia that died in 2013 because of tobacco, meaning that 660 people died every day, or 27 people per hour. That number is more dramatic than narcotics,” the National Commission on Tobacco Control Commissioner Hakim Sorimuda Pohan said last week.

Since he arrived in power in October, Widodo has tirelessly repeated the claim that 40 to 50 people die every day because of drugs. He has called it a national emergency.

Back in Dihan’s village, at the neighbor’s house, Januar’s mum is trying to get her restless kid dressed. She’s a bit worried, as he has recently started smoking. She doesn’t want him to become addicted, like Dihan. But for now all seems OK. “He doesn’t smoke as much,” she said. “I haven’t seen any problem, he’s still healthy.” Januar is 3-years old.