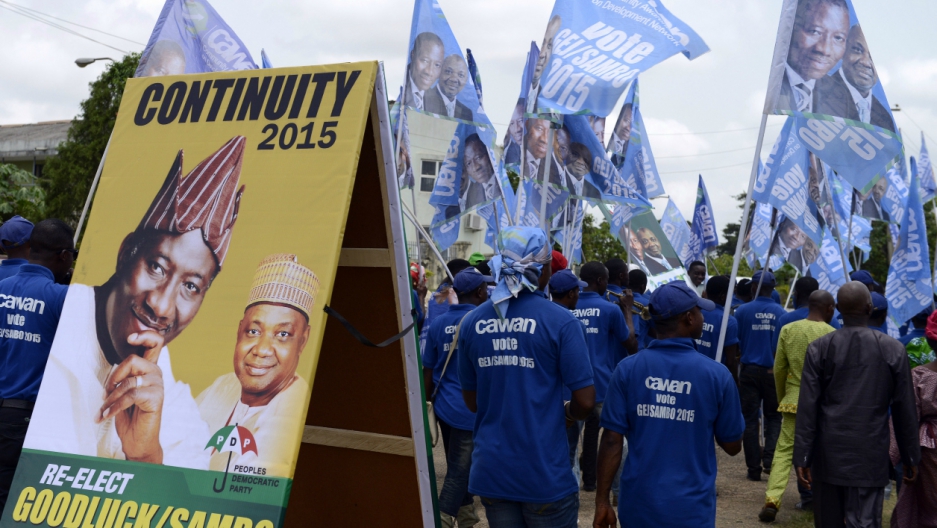 Supporters waving flags walk past a campaign sign to mobilize support for the re-election of Nigerian President Goodluck Jonathan during a rally in Akure on March 24, 2015.
Credit: PIUS UTOMI EKPEI
Share

Jonathan will face former military ruler Muhammadu Buhari in what is seen as the closest presidential race since the end of military rule in 1999.

In a broadcast to the nation on Friday, Jonathan said no political ambition could justify violence or bloodshed, adding that security measures had been taken to guarantee a free and fair election.

"Let me warn, however, that as president, commander-in-chief of the armed forces, I am under oath to protect the lives of all Nigerians and the security of our country at all times. I will never abdicate my responsibilities in that regard," he said.

"Those who may harbor any intentions of testing our will by unleashing violence during the elections in order to advance their political ambitions should think again," Jonathan said.

He added that security agencies were ready to deal with anyone who tried to disrupt the peaceful conduct of the elections or cause public disorder in Africa's top oil producer and biggest economy.

Around 800 people died in post-election violence in 2011 after Jonathan defeated Buhari. Western powers have been pressing both sides not to stoke tensions, with U.S. President Barack Obama and other world leaders issuing a direct appeal for calm this week.

In Abuja, the capital city, long lines formed outside banks as people sought to withdraw money. Queues for fuel also stretched for hundreds of feet in cities across the country.

"I'm getting my cash out now because I don't know what is going to happen. If it gets bad, you don't want to be stuck with no cash," said Wale Olatunji, 31, a businessman waiting at a bank in Abuja.

Ishaya Yahaya Junior, a 40-year-old civil servant in the northern metropolis of Kaduna, where worst violence occurred in 2011, said the atmosphere was tense, amid fears of a repeat of post-election violence.

"We have been stockpiling provisions – lots of people have been doing this. We don’t want to go outside if there is trouble," said the father-of-two, who estimated that his family could live for three weeks on stored food if necessary.

In a sign of growing tensions, a spokesman for opposition Rivers State governor Rotimi Amaechi, said an unidentified gunman shot at the governor's convoy on Thursday, wounding a security guard. The Nigerian police, however, said in a statement that the gun shots were fired from the governor's convoy.

The Nigerian army said separately that its troops had captured the northeast town of Gwoza, destroying the headquarters of the insurgents.

Jonathan said in the speech that the Nigerian army had contained Boko Haram Islamist insurgents in the northeast who were seen as the biggest security threat ahead of the election.

"They (the army) have recaptured most of the communities and territories formerly occupied by the insurgents, making it possible for thousands of internally-displaced Nigerians to begin returning to their homes and communities," Jonathan said.

The past six weeks have seen a dramatic turnaround against the insurgency, with troops from Chad, Cameroon and Niger joining the battle to dismantle the group's hold on a territory that in January was the size of Belgium. It is unclear, however, whether that will help Jonathan's re-election chances.

"Concerted and well-coordinated land and air operations have liberated Gwoza, the headquarters of their so-called caliphate which they renamed "darul hikima", the army said in a statement, adding that arms and ammunition were recovered and Boko Haram's administrative headquarters was destroyed.

It said Nigerian troops had taken over enclaves and hideouts from the militants, who were fleeing towards border areas.