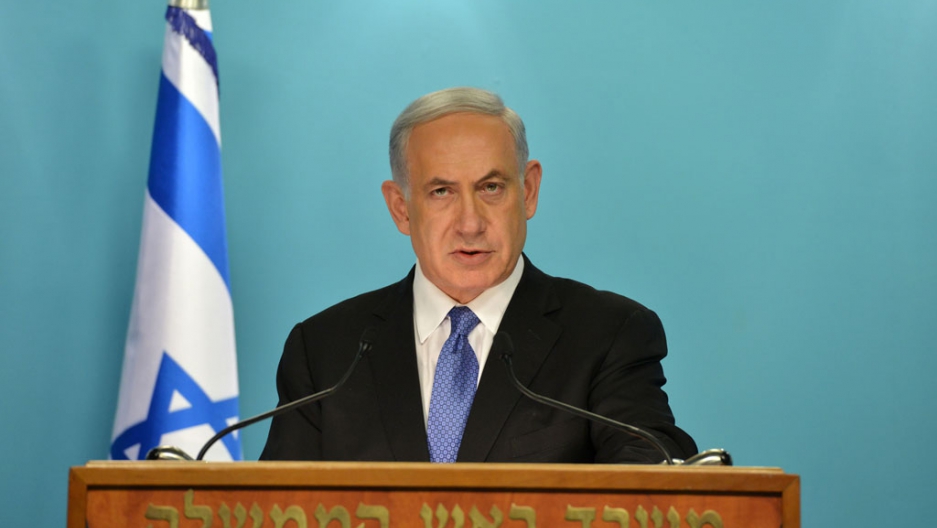 WASHINGTON — Israeli Prime Minister Benjamin Netanyahu urged the United States on Sunday to seek a better deal to curb Iran's nuclear program and said he would press American lawmakers not to give Tehran "a free path to the bomb."

Netanyahu said he has spoken with both Democrats and Republicans in Congress — nearly two thirds of House of Representatives members and a similar number in the US Senate — about the Iran nuclear issue.

The Israeli prime minister has been strongly critical of the framework agreement struck on Thursday between world powers and Iran, saying it threatens the survival of Israel.

In appearances on US television on Sunday, Netanyahu did not repeat his assertion on Friday that any final agreement should include a commitment by Iran recognizing Israel's right to exist.

"This is not a partisan issue. This is not solely an Israeli issue," Netanyahu said of the interim nuclear agreement, speaking on CNN's "State of the Union" program.

"This is a world issue because everyone is going to be threatened by the pre-eminent terrorist state of our time, keeping the infrastructure to produce not one nuclear bomb but many, many nuclear bombs down the line."

Appearing on CNN, Senator Dianne Feinstein, a leading Democratic voice on foreign affairs, said she did not believe the agreement threatened Israel, and had harsh words for Netanyahu.

"I don't think it's helpful for Israel to come out and oppose this one opportunity to change a major dynamic which is downhill, a downhill dynamic in this part of the world," said Feinstein.

Netanyahu angered the White House and alienated some of President Barack Obama's Democrats when he accepted a Republican invitation to address Congress on March 3, two weeks before the Israeli elections that returned him to office.

Netanyahu denied he was coordinating with House of Representatives Speaker John Boehner, who visited Israel last week, and with other Republicans to block the Iran deal.

Israel, which is believed to be the only nuclear-armed state in the Middle East, says it believes Iran is committed to its destruction.

The Israeli leader denounced the framework agreement between Iran and the United States, Britain, France, Germany, China and Russia, saying of Tehran, "They're getting a free path to the bomb."

"There's still time to get a better deal and apply pressure to Iran to roll back its nuclear program," he said on CNN.

Legislation in the works

Obama called the agreement reached in Lausanne, Switzerland, a "historic understanding" and told Netanyahu in a telephone call soon afterward that the deal represented progress toward a lasting solution that cuts off Iran's path to a nuclear weapon. Iran has long maintained that its nuclear program is purely for peaceful purposes.

Republicans, who control both chambers in Congress, and some Democrats are preparing legislation which would entail a vote in Congress on any Iran deal. Senator Bob Corker, the Republican chairman of the Senate Foreign Relations Committee, said he was waiting to learn more details about the framework agreement.

"I don't know how someone can ascertain whether this is something good or bad," he said on "Fox News Sunday."

Obama has said he would veto legislation demanding an up-or-down vote in Congress on any final deal worked out with Iran by the deadline of the end of June that has been agreed by Iran and the six powers.

Corker said it was unclear whether opponents of the deal would be able to muster the votes needed to override such a veto.

Netanyahu said he had had an hour-long conversation with Obama, with whom he has had strained relations.

Asked on CNN if he trusted Obama, Netanyahu said he was sure the American president was doing what he thought was good for his country, but they disagreed about the best policy on Iran.

"It's not a question of personal trust," Netanyahu said.