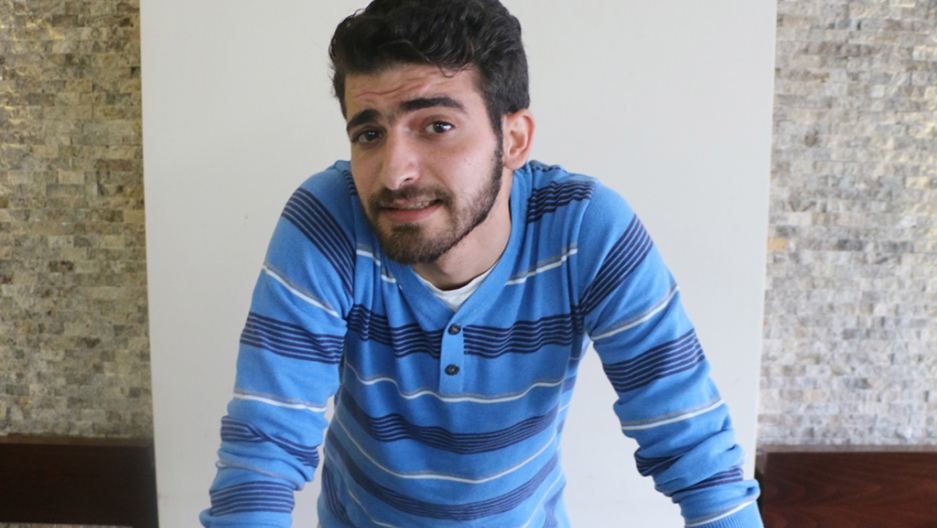 GAZA CITY — Before he found rap, Ibrahim Ghunaim’s favorite thing in the world to do was shooting.

“I was on my way to jihadism,” he says. If it hadn’t been for rap, he might have joined “the resistance” and taken up arms against Israel.

But it wasn’t to be. He discovered his passion at 13 years old, after attending a rap concert. After that he took to the internet to learn everything about it. He found Eminem and went from there.

“At first I started doing it as a kind of challenge, and then I found I couldn’t stop,” says Ghunaim, who goes by the stage name MC Gaza.

It’s not easy being a rapper in Gaza. In such a socially conservative society, there is little understanding of, or appreciation for, the art form.

“People here think that rap is haram [un-Islamic],” he says. “They think that we are acting like the West.”

“There are only two stages in Gaza and I’m not allowed to perform at either because the organizers don’t like rap. They say rap is not allowed. That it’s not art.”

Like many artists in Gaza, he faces the prospect of censorship from the de facto authorities, the Islamist group Hamas, if he crosses certain lines.

“I can’t say my feelings about them,” he says.

Artists are regularly the subject of censorship in Gaza, where the de facto government frequently cracks down on material that does not conform to its conservative norms.

Even when people do come to his shows — usually performed at schools or universities — he says he gets a mixed response.

“It feels good when people come specifically to see me, but when I do concerts with other groups, I feel that people don’t understand anything.”

As well as struggling to find the right audience and worrying about what he can and can’t say, Ghuneim has to deal with the fact that his passion may even pose a problem in his personal life.

“If I want to get married, nobody will respect that I am a rapper. They won’t accept me. They think it’s shame[ful] to be a rapper.”

Yet despite a lukewarm reception among Gazans, Ghuneim continues to tackle what he sees as the pressing issues he sees all around him.

“I don’t consider myself political,” says Ghuneim, “but it’s my duty to communicate what’s happening here to the outside world.”

At 23, he has witnessed the second Intifada, three wars in Gaza and the Egyptian revolution and his experiences have made their way into his lyrics.

In a song entitled “My Extraordinary Homeland,” he says, “one martyr gives way to another, a crying widow stands next to a prisoner’s wife whose injured daughter is trying to put on her holiday clothes but she can’t.” The video of the song features Gaza’s local parkour team vaulting over rubble in the aftermath of the 51-day Israeli military campaign entitled Operation Protective Edge that left over 2000 Gazans and 73 Israelis dead.

He raps about peace, the right of Palestinian refugees to return to their ancestral homes, street children and “emotional things.”

“Rap talks about anything you see that is wrong and explains why that is wrong,” he says, “I want to break the whole country that broke me.”

A lot of Ghoneim’s work focuses on the problems Palestinians face more broadly. His song “Law Ba3raf” ("If I knew”), is an indictment of the failure of the Palestinian leadership in Gaza — Hamas, and the West Bank — the more secular Fatah, to resolve their political differences.

Though he’s one of very few where he is, Ghuneim says he is like any other rapper, doing what other rappers do.

One of his songs is a “diss” track geared toward a number of other Arab rappers and artists who have criticized him in the past. There is a flip-flop in the shot to show his disrespect.

But because of his rejection in his home country, Ghuneim now yearns to go abroad to continue his career.

“The only people interested really in my work are foreign reporters who write things like 'Oh my goodness, there's rap in Gaza,' and I'm like, guys, there has been for 10 years. Stop being shocked,” he says. To date Ibrahim has recorded 45 songs and 18 videos. In addition to Eminem, he likes Julia Boutros and Lebanese singer Fairuz.

“I’m going to start rapping in English since only the West seems to be interested,” he says.

But it’s not so easy. Gaza has been under siege by Israel for the last eight years and it is very difficult to leave.

Even going to other parts of Palestine is prohibitively difficult. "I am supposed to be in the West Bank right now performing, but until now they [the Israeli authorities] haven’t responded to my request.”

Like many young people in Gaza, at times he feels hopeless because of the lack of opportunity.

“I want a lot of things, but what I will be able to do, that is a better question in Gaza, what will I be able to do tomorrow?”

Despite his work’s focus on problems in Gaza, he desperately wants to get out.

“If at this moment they said I could leave I would leave my laptop right here and go.”