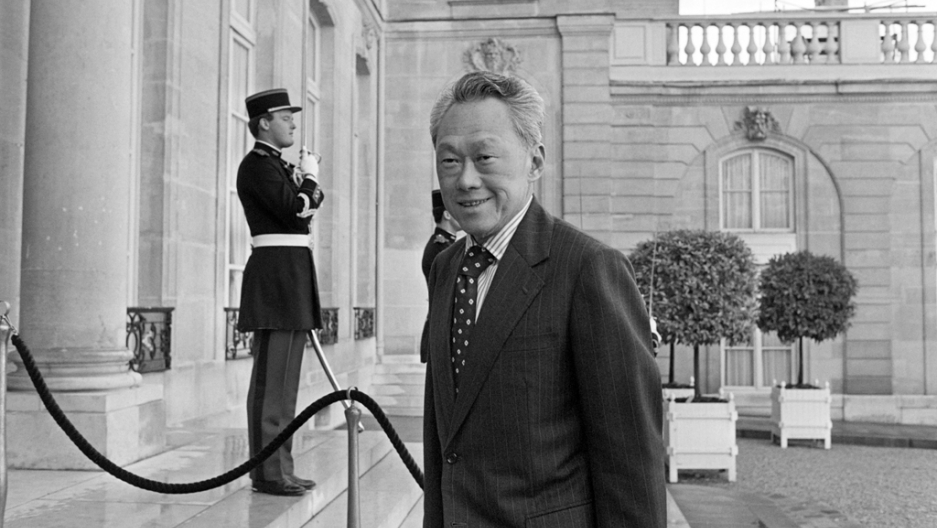 BANGKOK, Thailand — He was no Mandela or Gandhi. But Lee Kuan Yew, dead at 91, will be remembered for lifting millions out of poverty — even if that meant micromanaging their lives.

Most autocrats drive their nations into the ground. Lee did the opposite. For three decades as Singapore’s prime minister, starting in 1959, he oversaw one of the most successful social engineering feats in human history.

Lee turned a chaotic and malaria-ridden harbor in Southeast Asia into a gleaming city state where the per capita GDP exceeds that in the US.

He accomplished this through his signature style of authoritarianism lite. His government is notorious for banning chewing gum — one of many rules designed to keep Singapore from becoming like Beijing, where spitting and littering is rampant.

Singapore is an anomaly. It’s a metropolis dominated by ethnic Chinese who all speak English. Its sinks pump clean water and the cops don’t take bribes — no minor feat in Southeast Asia.

Much of this success is credited to Lee’s vision and policies. But in return for prosperity, its citizens have had to submit to a government that, despite occasional elections, functions as one-party state with little tolerance of dissent.

Here are some of Lee’s more provocative quotes:

On giving the masses political power:

“When people say, ‘Oh, ask the people!’, it’s childish rubbish ... They say people can think for themselves? Do you honestly believe that the chap who can’t pass primary six knows the consequences of his choice when he answers a questions viscerally on language, culture and religion? ... we would starve, we would have race riots. We would disintegrate.”
— Quoted in Lee Kuan Yew: The Man and His Ideas, 1998

On valuing prosperity over democracy:

“You’re talking about Rwanda or Bangladesh, or Cambodia, or the Philippines. They’ve got democracy ... But have you got a civilized life to lead? People want economic development first and foremost. The leaders may talk something else. You take a poll of any people. What is it they want? The right to write an editorial as you like? They want homes, medicine, jobs, schools.”
— Lee Kuan Yew, The Man and His Ideas, 1997

“I have never been over concerned or obsessed with opinion polls or popularity polls. I think a leader who is, is a weak leader. Between being loved and being feared, I have always believed Machiavelli was right. If nobody is afraid of me, I’m meaningless.”
— The Singapore Story: Memoirs of Lee Kuan Yew, 1997

On his adversaries and critics:

“Because my posture, my response has been such that nobody doubts that if you take me on, I will put on knuckle-dusters and catch you in a cul-de-sac ... If you think you can hurt me more than I can hurt you, try. There is no other way you can govern a Chinese society.”
— Quoted in Lee Kuan Yew: The Man and His Ideas, 1998

On meddling in citizens’ private lives:

“I am often accused of interfering in the private lives of citizens. Yes, if I did not, had I not done that, we wouldn’t be here today. And I say without the slightest remorse, that we wouldn’t be here, we would not have made economic progress, if we had not intervened on very personal matters – who your neighbor is, how you live, the noise you make, how you spit, or what language you use. We decide what is right. Never mind what the people think.” — Speaking to Straits Times newspaper, 1987

“I think we were progressing very nicely until the surge of Islam came. And if you asked me for my observations, the other communities have easier integration — friends, inter-marriages and so on — than Muslims ... I would say, today, we can integrate all religions and races except Islam.” (Lee later retracted this comment.)
— Lee Kuan Yew: Hard Truths to Keep Singapore Going, 2011

“We allow American journalists in Singapore in order to report Singapore to their fellow countrymen ... But we cannot allow them to assume a role in Singapore that the American media play in America. That of invigilator, adversary and inquisitor of the administration.”
— Speech to American Society of Newspaper Editors, 1988