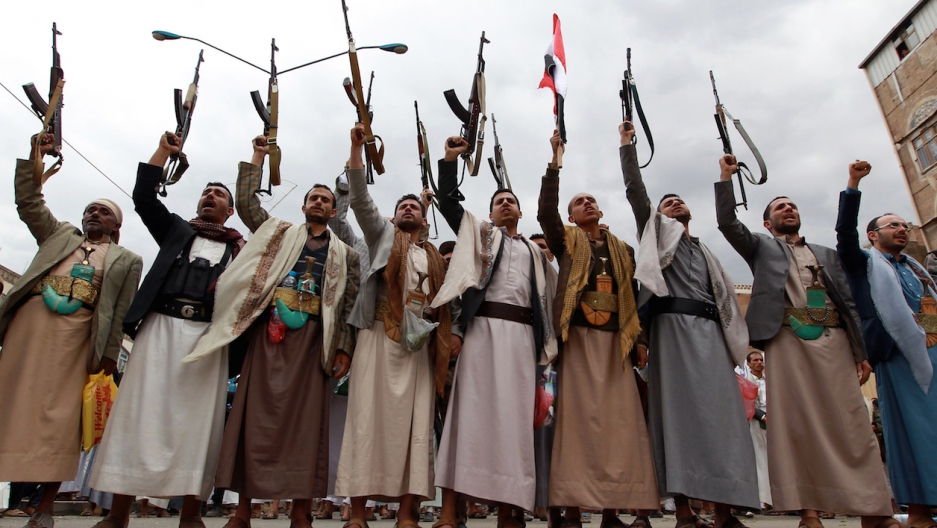 Tribal gunmen loyal to the Houthi movement brandish their weapons on Thursday during a gathering in Sanaa to show support the Houthi militia and against the Saudi-led intervention in the country.
Credit: Mohammed Huwais
Share

A Saudi-led coalition of several Arab countries launched an aerial assault in Yemen that involved over 100 aircraft engaged in strikes for four hours late Wednesday night.

In spite of the catastrophic destabilization and panicked regional military action, President Barack Obama’s administration continues to hail Yemen as a successful model for combating extremism.

“The White House does continue to believe that a successful counterterrorism strategy is one that will build up the capacity of the central government to have local fighters on the ground to take the fight to extremists in their own country,” White House Press Secretary Josh Earnest told reporters on Wednesday.

“That is a template that has succeeded in mitigating the threat that we face from extremists in places like Yemen.”

But in the eyes of Yemenis and most Yemen watchers, the country is coming apart at the seams — an unraveling that’s been ongoing since 2011, when the United States’ “Yemen Model” first went into action.

The problem with Saleh

After months of street protests and violent government suppression of the demonstrations, the US and its diplomatic partners negotiated an agreement for then-President Ali Abdullah Saleh to leave power. Ignoring the demands of youth protesters, Saleh won immunity from prosecution and remained in Yemen as a part of the deal.

Four years later, Saleh and his allies, the Houthis, are back on top as Yemen’s mightiest power brokers.

So why was Saleh allowed to stay?

“Something had to be done about Saleh. He’d been building his empire for over 30 years,” said Hamza Alshargabi, a Yemeni youth activist and medical professional now based in the US.

Alshargabi treated wounded protesters in Yemen’s Change Square field hospital during the 2011 uprising. He was also one of thousands who warned Western diplomats that allowing Saleh to stay would be disastrous for Yemen.

“We should have, at least, frozen his assets and exposed them to the world. That would have demonstrated how much he’d damaged the country. Saleh went to bed with a lot of players. He’s been here a long time,” he said.

The danger that Saleh posed to Yemen, even after leaving the presidency, was a foregone conclusion for many Yemenis. What vexes them the most, however, is that US, European Union and Gulf nations’ diplomats did not heed their warnings.

“You need context to understand Yemen. US and EU diplomats did not have that and they didn’t know what they were doing. They were employees in the State Department or their foreign ministries that just wanted to spend their two of three years in what they thought was a shithole and then get out,” Alshargabi added.

Strength from the streets

Critics say the West’s lack of understanding of Yemen and its people led to further blunders after a power transition deal had been brokered and implemented. The agreement also required Saleh’s former vice president, Abed Rabbo Mansour Hadi, to assume the presidency in an uncontested election after Saleh’s departure from the office.

From the beginning, Hadi’s tenure as Yemen’s leader was wracked with uncertainty and the wavering loyalties of military officers and senior politicians.

“What the West failed to understand is that right now the people of Yemen don’t care who rules them. They care about who can provide basic services and stability for them. For the past four years under Hadi, no one was providing that,” said one senior Yemeni official reached by phone.

“To be a leader you have to recognize that your strength comes from the streets — from the people. Hadi thought it came from the White House, the UN and the GCC [Gulf Cooperation Council]. The Houthis did the complete opposite and were successful,” he added.

While Hadi’s power base weakened, Saleh bided his time, reshuffled his decades-old alliances and shored up his strength. When the time was right, he only needed to observe the pieces falling into place.

Just as Yemen’s youth protesters predicted in 2011, the “Yemen Model,” doomed for failure at its inception, is now catastrophically unraveling before the eyes of more than just Yemenis.