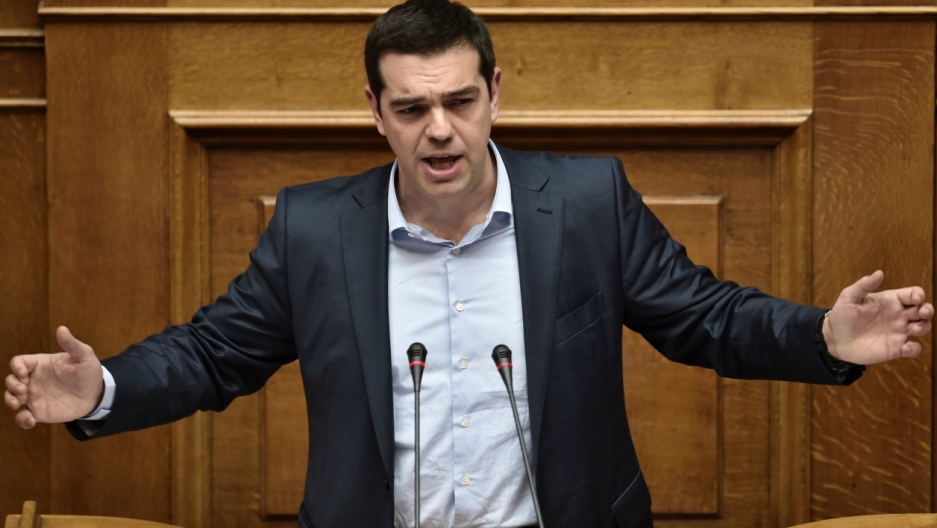 ATHENS, Greece — Prime Minister on Monday appealed for an "honest compromise" with lenders but warned Greece would not agree to an "unconditional" one after its biggest creditor demanded it do more to show commitment to reform.

With its cash coffers emptying rapidly, Athens is running out of time to convince euro zone and IMF lenders that it will implement reforms and is worthy of fresh aid. Athens could run out of cash by April 20, a source has previously said.

"It is true that we are seeking an honest compromise with our lenders but don't expect an unconditional agreement from us," Tsipras told parliament at a special session on the status of talks with lenders.

The radical leftist premier gave away little on progress made in talks, but, in a boost for the government, said a new law making it easier to repay tax arrears had already resulted in 100 million euros flowing into state coffers in a week.

Tsipras appealed to the center opposition to support his efforts. Former Prime Minister Antonis Samaras said his conservatives would support efforts to unlock aid but not at the price of driving Greece into the ground.

"Whatever you do, do it fast," said Samaras, who lost the January national election to Tsipras, accusing the 40-year-old leader of facing "deadlocked talks and panic."

The comments came after Greece's biggest creditor Germany said the euro zone would give Athens no further aid until it has a more detailed list of reforms and some are enacted into law, adding to skepticism over plans presented last week.

Chancellor Angela Merkel said Athens had a certain degree of flexibility on which reforms to implement but that they must "add up" to the satisfaction of European partners.

"The question is: can and will Greece fufil the expectations that we all have?" she said during a visit to Helsinki.

"There can be variation as far as which measures a government opts for, but in the end the overall framework must add up."

A senior official in Brussels on Sunday had dismissed the list as "ideas" rather than a plan but Athens has not said whether it is willing to amend it much further.

Greek and other euro zone officials from the Euro Working Group are due to discuss the reforms on April 1, a Brussels source said.

A Greek finance ministry official said the list included a lowered target of 1.5 billion euros ($1.6 billion) in proceeds from asset sales this year and a proposal to set up a bad bank with bailout funds returned to the euro zone in February.

Among the scheduled asset sales is a stake in the country's biggest port, Piraeus, in which China has expressed interest.

The list also estimates Greece can raise 3.7 billion euros this year through audits of bank transfers abroad, TV license and e-gaming tenders, a value-added-tax lottery scheme, a crackdown on smuggling and the settlement of arrears owed to the state.

That package targets a primary budget surplus of 1.5 percent of national output this year — compared to a previous target of three percent in Greece's EU/IMF 240 billion euros ($260 billion) bailout — and growth of 1.4 percent in 2015, down from the bailout target of 2.9 percent, a government official said.

In a potential sign of Greece trying to shift the debate with its lender, Athens also brought up the issue of debt relief on Monday, after saying little on the issue recently although it was a centerpiece of Tsipras's pre-election campaign.

"The solutions are known — either there will be a haircut or it will be extended, or [repayment] will be linked to an increase in output or exports, or there will be lower interest rates," Deputy Finance Minister Dimitris Mardas told financial daily Naftemporiki.

In Stockholm on Monday, the Organization for Economic Co-operation and Development's Secretary General Angel Gurria said debt relief was not under discussion, but also ruled out a Greek exit from the euro zone.

"The suggestion that a country may voluntarily exit the European Union is no longer on the cards," he said.

(By Lefteris Papadimas and Renee Maltezou; Additional reporting by Caroline Copley in Berlin, George Georgiopoulos in Athens and Jan Strupczewski in Brussels; Writing by Deepa Babington; Editing by Andrew Roche)