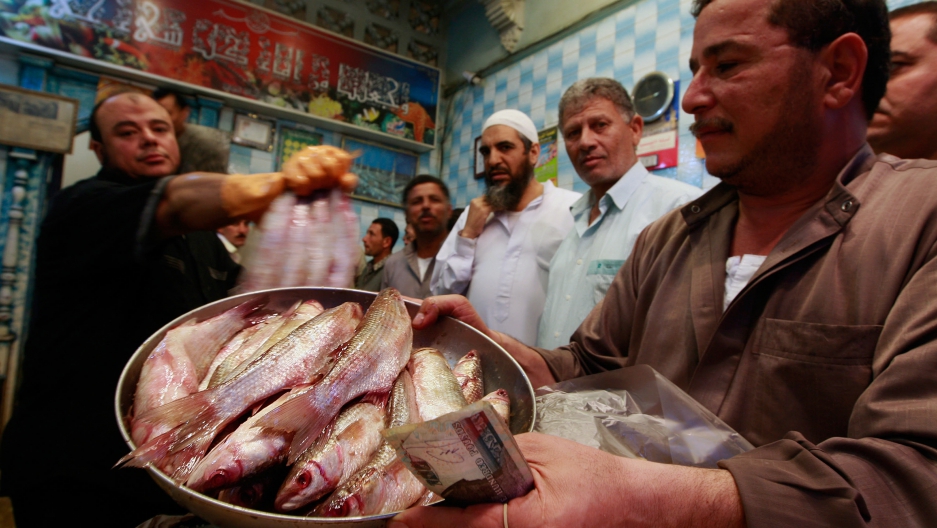 A vendor serves Fisikh to his customers at his shop in the town of Nabaroh, near the Nile Delta city of Mansura, on April 26, 2008, as they celebrate Sham al-Nessim.
Credit: Khaled Desouki
Share

CAIRO, Egypt — Every year on the day of the spring festival Shem el-Nessim, Egyptians are rushed to the hospital after eating the traditional delicacy of fermented (sometimes rotten) fish, or “fesikh.”

The ancient holiday marking the new season falls every year on the day after Coptic Easter and is celebrated by Christians and Muslims. Shem el-Nessim means “smelling the Zephyrs,” or smelling the breeze, in Arabic.

Fesikh — a grey mullet, dried in the sun and fermented in salt for up to a year — is considered an essential part of the celebration, even though it can sometimes be deadly.

The way the fish is prepared leaves those who partake at risk of botulism. Every year the newspapers are full of stories of poisonings, despite calls from health officials for citizens to forgo the dish.

This year, like every year, Egypt’s Health Ministry issued a warning that advised Egyptians against eating fesikh.

“The way of preparing fesikh can be unsafe due to the lack of salt in the fish, and some people use dead fish floating on the sea surface,” Hossam Abdel Ghaffar, spokesman for the Ministry of Health, said on Monday.

The most recent figures show that two people died from eating fesikh in 2010, and the same number in 2009. In 1991, 18 people were killed after eating it.

Although there have been no reports of deaths so far this year, six people have already been hospitalized.

But for some, the risk is worth it. A long line formed today outside a shop in Cairo belonging to Hajj Mohamed, who has been selling fesikh in his neighborhood for as long as anyone can remember.

“I throw those warnings out the window,” says Ezzat el Hennawi, a local schoolteacher. “I’ve bought my fesikh from him forever. He has a great health record. No one’s gotten sick.”

“Hajj Mohamed is famous, everybody buys from him,” says Mumtaza Zaki, 50. She is buying her fesikh on the day after the holiday because she didn’t have enough money on the day.

Public parks have been filled with families getting some fresh air and eating a concoction of fesikh, onion, lemon, lettuce and tahini — some people say the lemon and onion aid with digestion.

It's not to everyone's taste, however. This year on Twitter was awash with fesikh humor. One meme subbed the word fesikh into well-known movie titles (50 Shades of Fesikh, The Fesikh and the Furious). Others on Twitter bemoaned the fesikh smell in their houses and having to eat it with their families.