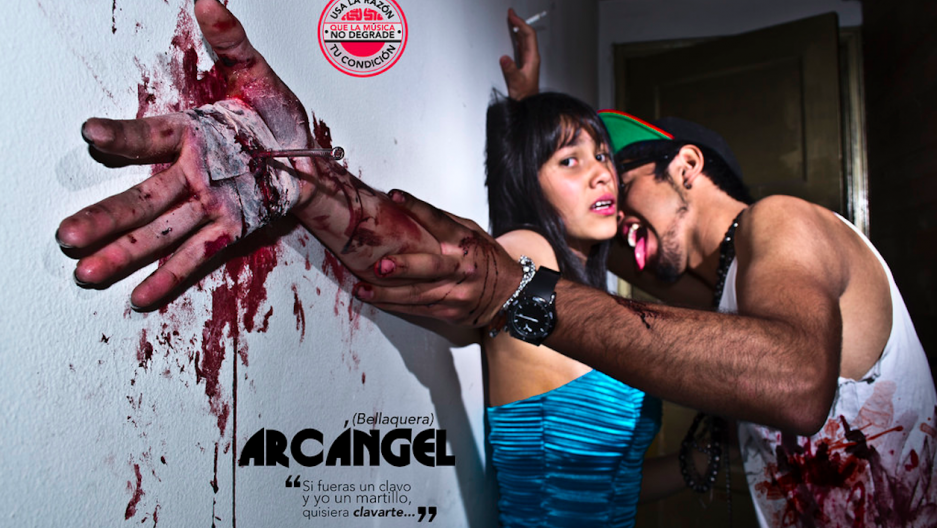 These jarring images are designed to shock. And you have to admit, they’re pretty effective.

They are part of a growing Facebook campaign against reggaeton, a raunchy Latin American music genre that fuses hip hop and dance hall reggae.

“Usa la razón — que la música no degrade tu condición,” which translates to “Think about it — don’t let the music degrade you,” uses shocking images like these to illustrate the disturbing lyrics of popular reggaeton songs, which are typically violent, lewd and degrading to women.

This particularly shocking image illustrates the lyrics from Puerto Rican reggaeton star Daddy Yankee's song “En la cama,” that say: “They like to f**k her hard and then eat her p***y.”

While it might be offensive to many ears, the infectious rhythm of reggaeton has made it hugely popular in dance clubs throughout Latin America, particularly in Central America where the controversial musical style is believed to have originated.

“Men and women have to think about what they are listening to because music affects our behavior,” Ibañez told El Tiempo, a Colombian daily newspaper. The photographer took the explicit photos for the campaign, which was launched last year by John Melo when he was a visual design student at Unipanamericana Compensar in Bogota.

"Language directly affects our way of living. If we have violent music, we will have a violent society."

The Facebook campaign has so far received more than 28,600 likes and countless comments from men and women concerned about the music’s treatment of women.

“We have to eliminate this rubbish from the face of the earth,” wrote David Alejandro Guillén Sierra of Honduras.

“I hope there’s a campaign against this filth in my own country.”

But Ibañez and her fellow campaigners say prohibition is “not the solution.”

Rather, they hope to generate a greater awareness among young reggaeton fans about the content of the music they are listening to — and prevent them from acting out lyrics like “in the kitchen I’m going to beat you.”

Correction: A previous version of this article said that Lineyl Ibanez launched the campaign, but she was actually the photographer. John Melo created the campaign while studying visual design in Bogota.