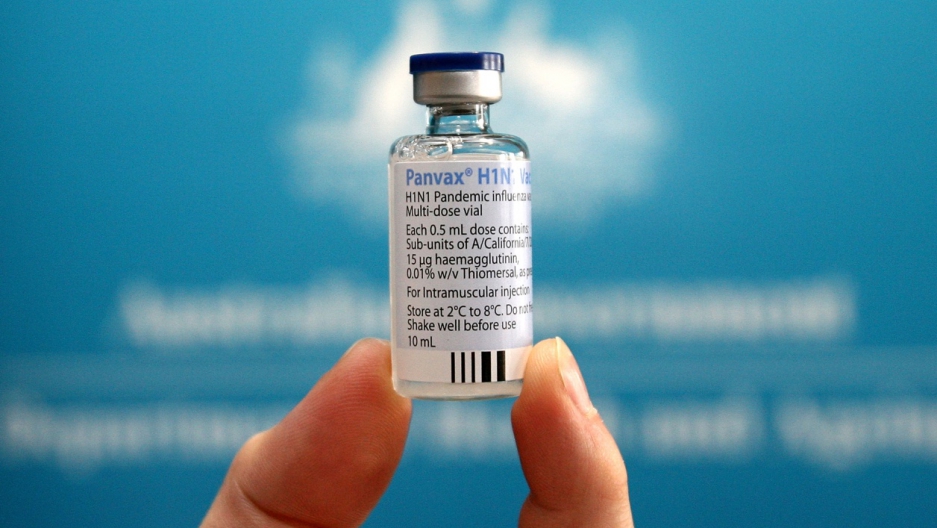 A vile of a vaccine tht protects again certain kinds of influenza.
Share

There is a debate over the safety of vaccinations in the United States. For much of the developed world, that comes as a surprise. Many countries, like France, impose stiff penalties on anyone who doesn't vaccinate their children.

And now Australia's government, which is conservative, has introduced a new plan called “No Jab, No Pay.” It means that if you don't vaccinate you don't get any government welfare benefits. It's a controversial plan. Almost 40,000 Australian children under seven have not been vaccinated because their parents refuse. That means a lot of families will lose their payments.

The government, however, needed to do something. In the past 10 years, the number of parents refusing to vaccinate their children has doubled. While the parents usually refuse because of fears that the vaccines are linked to the development of diseases like autism, science disagrees. And unvaccinated children are an enormous health risk, especially at schools and other places where large groups of young people gather.

In the United States, the debate is even more heated. In January, a measles outbreak erupted at Disneyland. Most of the infected kids were unvaccinated. It wasn't fun at all. Disneyland, for a brief but shocking moment, was no longer the happiest place on Earth.

The outbreak was surprising. In the 1950s about 3 to 4 million children contracted measles, a highly infectious disease that can be fatal. By 2000, measles was gone. Well, now it's back. In reaction, California has introduced a bill that would limit the number of people allowed to opt out of receiving vaccines. It's a tame reaction given the potential seriousness of the problem. But the bill has been met with strong resistance, and even public protests. The author of the bill is living under added security this is week. Other states introducing similar laws are facing similar resistance.

Perhaps the US federal government will do like Australia and intervene. Or maybe it will go even further and adopt harsher laws like France. Or maybe more of us will die of rubella and polio.

One of the scariest trends in the world right now is the growing support for Europe's radical, far-right political parties. All over the region, candidates supporting isolationist and protectionist policies — and who say disturbingly racist things — are no longer considered fringe. These days, they are enjoying mainstream popularity. And nowhere is that more true than in France.

The Le Pen family heads up the National Front. Right now the daughter, Marine Le Pen, has taken over from her 86-year-old father Jean-Marie Le Pen. Jean-Marie is famous for saying some heinous things. Just recently he referred to Nazi gas chambers as a mere “detail of history” and defended those who collaborated with the Nazi occupiers during World War II.

Statements like these have not prevented the National Front from gaining seats and support. But Marine wants to take the party to the next level, and she wants to be president. So she is trying her best to put on a less prejudiced face. Unfortunately dad keeps getting in the way. Last week the whole thing erupted into a whirlwind of amazing family gossip. And it's only getting more dramatic this week. The father has been forced to drop out of a regional race, and — gasp! — he called his daughter “disappointing” in an interview. This is Game of Thrones-level theatrics.

There was a giant meeting of kings, emperors, dictators and presidents last week. It was held in Anaheim, California. And no one heard about it because the mainstream press is part of the conspiracy to keep these rulers from achieving greatness.

Actually, it's because they were the leaders of so-called “micronations,” mostly self-declared sovereign plots of land that no one really pays attention to unless it is late at night, your computer is on your chest and you are on page eight of a Google search. It is there that you will find information about “Broslavia,” which is exactly what it sounds like. Broslavia boasts a military armed with cardboard AK-47s that shoot rubber bands. There is also Sealand, off the coast of the United Kingdom, and Molossia, in Nevada. Molossia has a tourist season and issues stamps.

The leaders gathered over the weekend to discuss inter-micronational trade and attend the “Cotillion,” a formal ball where full regalia is encouraged and princes and princesses will surely meet their suitors. The whole thing sounds kind of awesome, if we're honest.