Barcelona resident Josefin Ekner is waiting until 2 p.m. to use her dishwasher today. That’s when the price of electricity drops for a few hours, when demand is low. Ever since her electricity bills doubled a few months ago, Ekner said she reorganized her household chores to only consume energy when it’s cheapest.

“At first, we didn’t understand what was going on,”  Ekner said. “But then we started seeing articles about it in the news.”

Across Spain, the price of electricity has steadily risen at historically high rates since early this summer — and it’s expected to climb even higher. Experts say the price hike is due to several factors, primarily the increase of the price of natural gas and CO2 emission costs.

“If we’re paying so much in summer, how will it be this winter?” Ekner asked.

She and her husband don’t have central air conditioning, so their summer bills tend to be the lowest of the year. In winter, their 19th century apartment building gets fairly cold, so they use electric heaters to stay warm — especially now that Ekner works from home. She said they were shocked to see their electricity bills jump to around $120 a month — and she’s worried about prices increasing even more.

So she decided to make a change: Ekner joined a renewable energy coop to ensure all her electricity comes from renewable sources.

“It makes more sense to switch to renewable energies."

“It makes more sense to switch to renewable energies. The environment is important to me, as well as the future of our planet,” said Ekner, who has a 5-month-old infant. “It’s what we’ll all end up doing in the future anyway, and more so if it’s cheaper.” 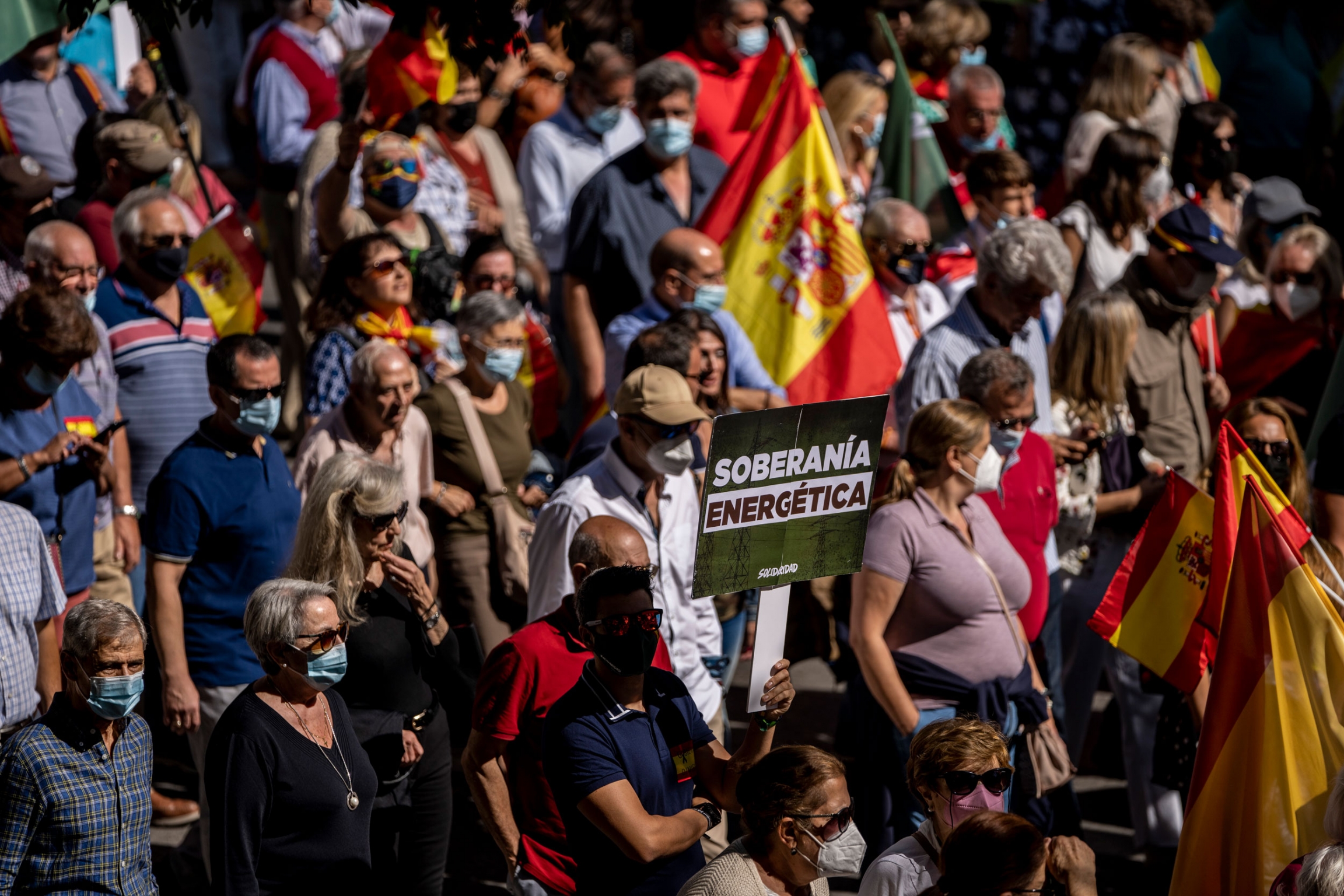 People take part during a protest against the increases in the price of electricity in Madrid, Spain, Sunday, Sept. 19, 2021. Gas and electric prices are spiking in Europe. Consumers are already finding higher bills in their mailboxes and jumps in prices on wholesale markets in recent days are expected to send costs higher still.

Dirk Buschle, deputy director and lead council of the international organization Energy Community, said renewable energies are, in fact, cheaper — and will continue to be in the long-run. That’s becoming clear as soaring energy prices affect, not just Spain, but all of Europe.

“I think we’re witnessing right now a situation where we see several factors coming together and producing an effect which, in this way, was probably not expected,” Buschle said.

For starters, he said, there’s the weather. It was not windy enough this summer to produce sufficient wind power — that meant bringing back old sources of energy, like gas and coal. At the same time, the international price of natural gas is shooting up and, because of a European emissions trading scheme to discourage the use of fossil fuels, so is the cost of CO2 emissions.

In short, Buschle said the price for gas and coal is going up, but there are still not enough sources of renewable energy to make up for that.

“We are in a transition from fossil fuels to renewable fuels in the energy sector. ... I think we would have all been in a different situation right now and probably not suffered from these high prices if the transition had moved much, much faster.”

“We are in a transition from fossil fuels to renewable fuels in the energy sector, in the European Union that goes by the name of Green Deal,” Buschle said. “I think we would have all been in a different situation right now and probably not suffered from these high prices if the transition had moved much, much faster.”

The most expensive part of the transition, Buschle said, is creating a reliable grid for when renewable energies fail — that is, when there isn’t enough sun or wind power. But that costs money, and, he added, it can be difficult to get governments to commit to these long-term investments when they don’t necessarily provide short-term solutions.

In Spain, the government is putting new regulations in place to deal with skyrocketing energy prices, like setting a cap on the price of natural gas and lowering some taxes on electricity bills. And in a televised interview that aired last week, Prime Minister Pedro Sánchez also mentioned the need to invest more in renewable energies — referring to them as the cheapest way to generate electricity.

Related: How one Danish energy company went from black to green in 10 years 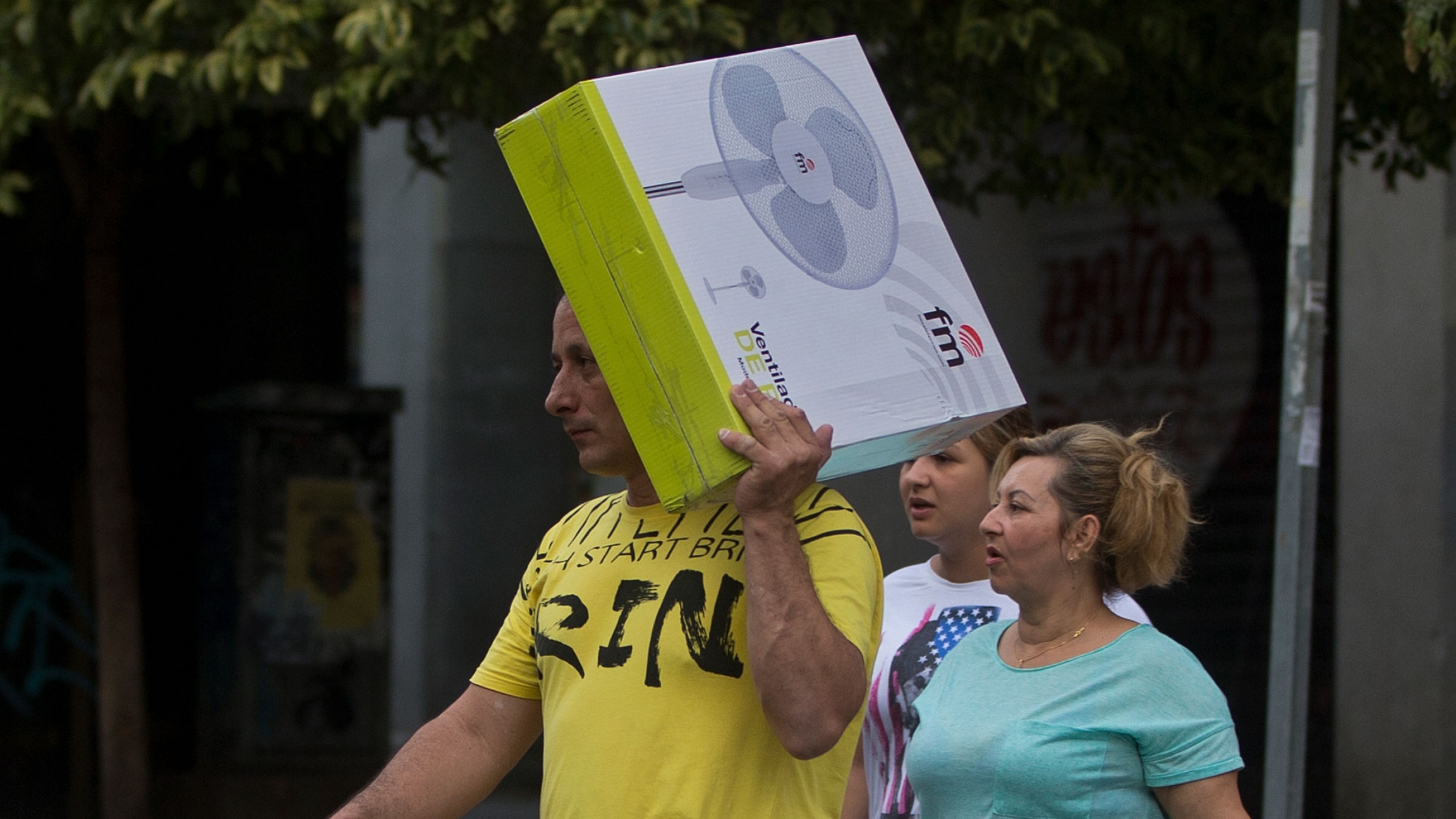 In this June 15, 2017 file photo, a man carries a boxed electric fan in Madrid, Spain. Spanish consumers are fretting over record-high power prices.

Professor José María Yusta, who specializes in energy markets at the University of Zaragoza, said Spain has been moving faster than other European countries in transitioning to renewable energies — especially since 2018, when the socialist government came into power and lifted a law that previously taxed individuals who wanted to set up solar panels.

“In the last year alone, hundreds of solar panels have been installed on residential buildings and warehouses equaling up to 700 megawatts,” Yusta said.

He hopes the recent electricity price hike will not only push governments to act faster, but influence consumers to switch to renewable energy by installing their own solar panels or joining existing collectives.

“It’s no longer a political or socially conscious issue, but an economic one. ... In the end, money may be the defining factor for boosting the renewable energy sector.”

“It’s no longer a political or socially conscious issue, but an economic one,” Yusta said. “In the end, money may be the defining factor for boosting the renewable energy sector.”