Traffic jams pack the winding narrow roads of La Palma at dusk as curious residents and visitors flock to snap photos as the Spanish island's new volcano furiously ejects material into the air and glowing lava swallows villas, crops and warehouses on its downhill path to the sea.

With the constant rumbling of the eruption as the soundtrack, punctuated by the thundering sound of the magma as it breaks into the surface, the scene is almost hypnotic. Yet emergency workers, banana farmers and grape growers in La Palma are less thrilled by one of nature's most astounding events unfolding so close to home.

Listen: The World's host Marco Werman interviews journalist Barbara Belt, a resident of the Canary Islands who has been a close-up witness to the eruption on La Palma. 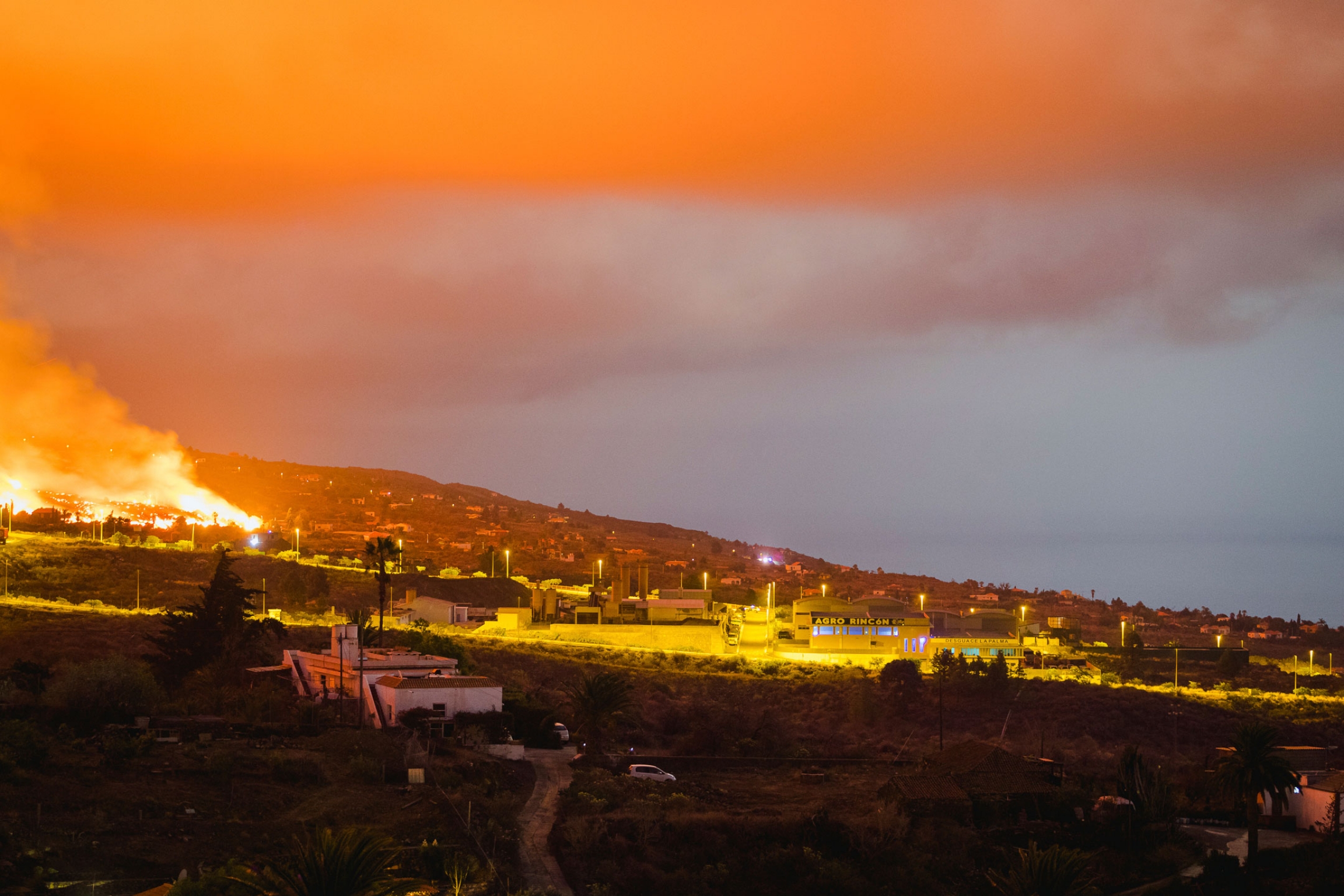 Lava flows from an eruption of a volcano near El Paso on the island of La Palma in the Canaries, Spain, in the early hours of Monday, Sept. 20, 2021.
Credit: Jonathan Rodriguez/AP

“This is no joke,” said Pedro José Alegría, 70, a farmer who had returned to La Laguna, a neighborhood bordering one of the evacuated areas, to feed his donkey.

Speaking from an ash-covered pickup truck, he said he fears for several of the greenhouses he owns on a banana plantation that looks out to the Atlantic Ocean.

The area, located just where the Cumbre Vieja ridge flattens, is called Los Llanos, which means The Flats in English. It has some of La Palma's most fertile soil, home to avocado, papaya and other crops, but also vineyards that supply the grapes for the Canary Islands’ increasingly popular wines.

Alegría's immediate concern is that the lava will destroy the intricate piping that feeds the plantation's sprinklers. But there are also worries the volcanic activity will make the groundwater unusable for drinking as well as water-intensive banana farming.

“The volcano may not kill us directly, but it’s going to make a lot of us go bankrupt."

“The volcano may not kill us directly, but it’s going to make a lot of us go bankrupt," Alegría said. 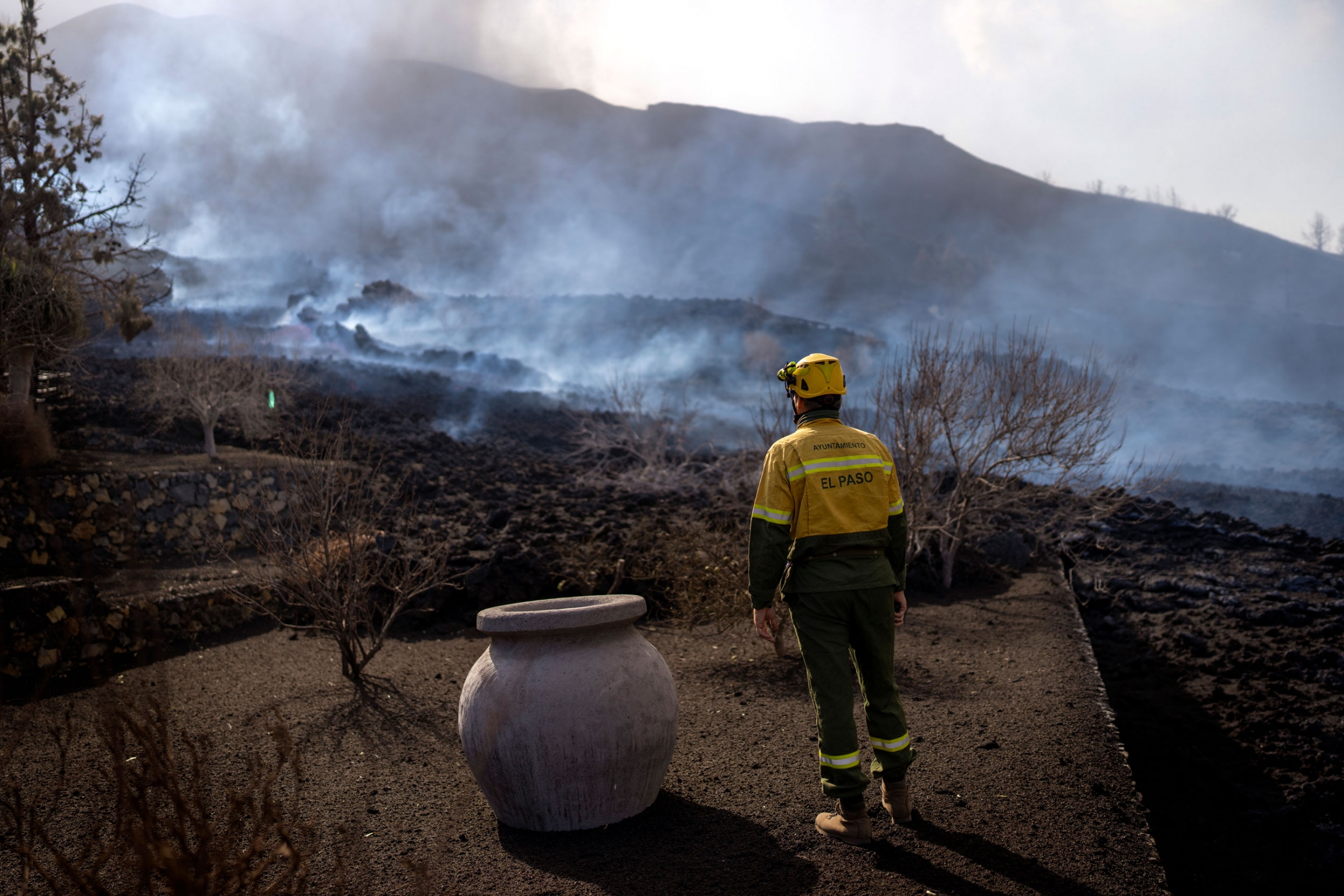 A municipal worker looks as smoke rises after a volcano erupted, near El Paso on the island of La Palma in the Canaries, Spain, Tuesday, Sept. 21, 2021.

Despite the little arable land on La Palma, farming is the island's main source of income. Bananas are the industry's crown jewel; nearly 7,413 acres are planted with banana trees that provide jobs for over 10,000 of the island's 85,000 residents.

Between 6,000 and 8,000 tons of bananas are shipped weekly from the island to the Spanish mainland and elsewhere in Europe.

The importance of bananas to La Palma is the reason Alegría is furious Spanish Tourism Minister Reyes Maroto said Monday that the government would incentivize “volcano tourism” and that the active peak was good for tourism.

“Can the minister tell me who is this good for? It might be for visitors and for those who own the hotels," Alegría said.

“I’m 70 years old and have savings that can last me three or four years,” he added. “I might die before that, but there are others here who are getting started, and the volcano is taking everything away from them.” 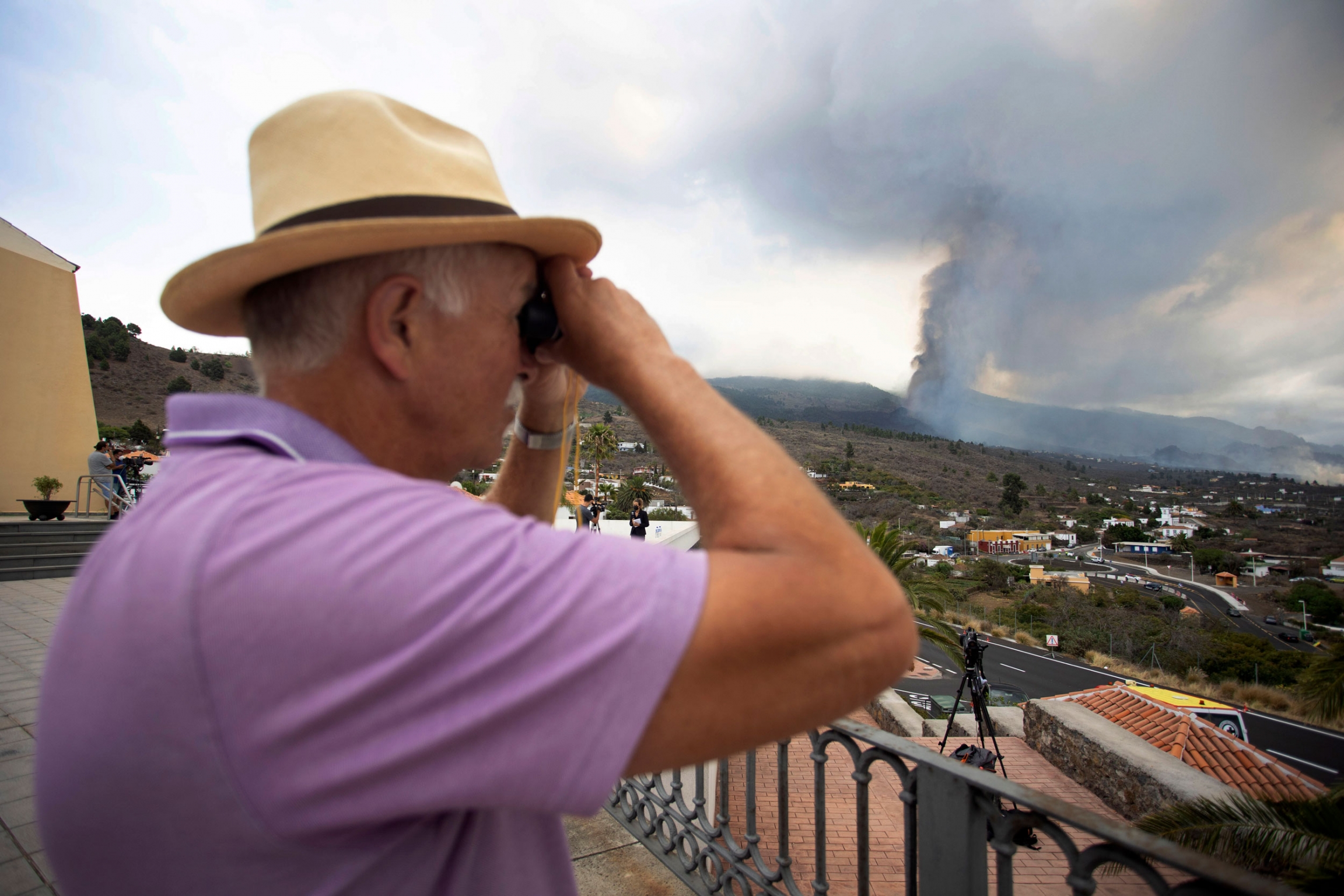 A man looks out towards the eruption of a volcano near El Paso on the island of La Palma in the Canaries, Spain, Monday, Sept. 20, 2021.

The eruption began Sunday afternoon. By Tuesday, a 19.7-foot-tall cone had formed around the biggest fissure, emitting between 8,000 and 10,500 tons of sulfur dioxide per day.

The lava flows, which initially slid down the hill at 0.43 miles per hour, have slowed down. But on their way to the Atlantic, they destroyed over 160 buildings as of Tuesday morning, including a local school. The lava also buried roads, toppled utility poles and damaged other infrastructure. Some 5,500 people have been evacuated.

La Palma’s location as the northwesternmost of the Canary Islands sets it apart from the rest of the archipelago. Unlike the sprawling resorts of Tenerife and Lanzarote’ that advertise sunset views and endless nightlife entertainment, La Palma's comparatively undeveloped landscape appeals to athletic types looking to hike, cycle and other outdoor pursuits.

That's how Matthias and Anette Fuchs decided to invest their wealth and time into turning a traditional cottage into their heir dream vacation home. It had a mosaic at the entrance. A swimming pool. And a deck where the couple, who run a wine import and distribution business in Germany, hosted epic dinners for friends and relatives.

All of it, including the solar panels that the Fuchs installed because they believed in messing with the island's environment as little as possible, is now buried by lava.

“It was a special place, it was paradise,” Anette Fuchs said, her eyes teary as she held on to her husband's arm. 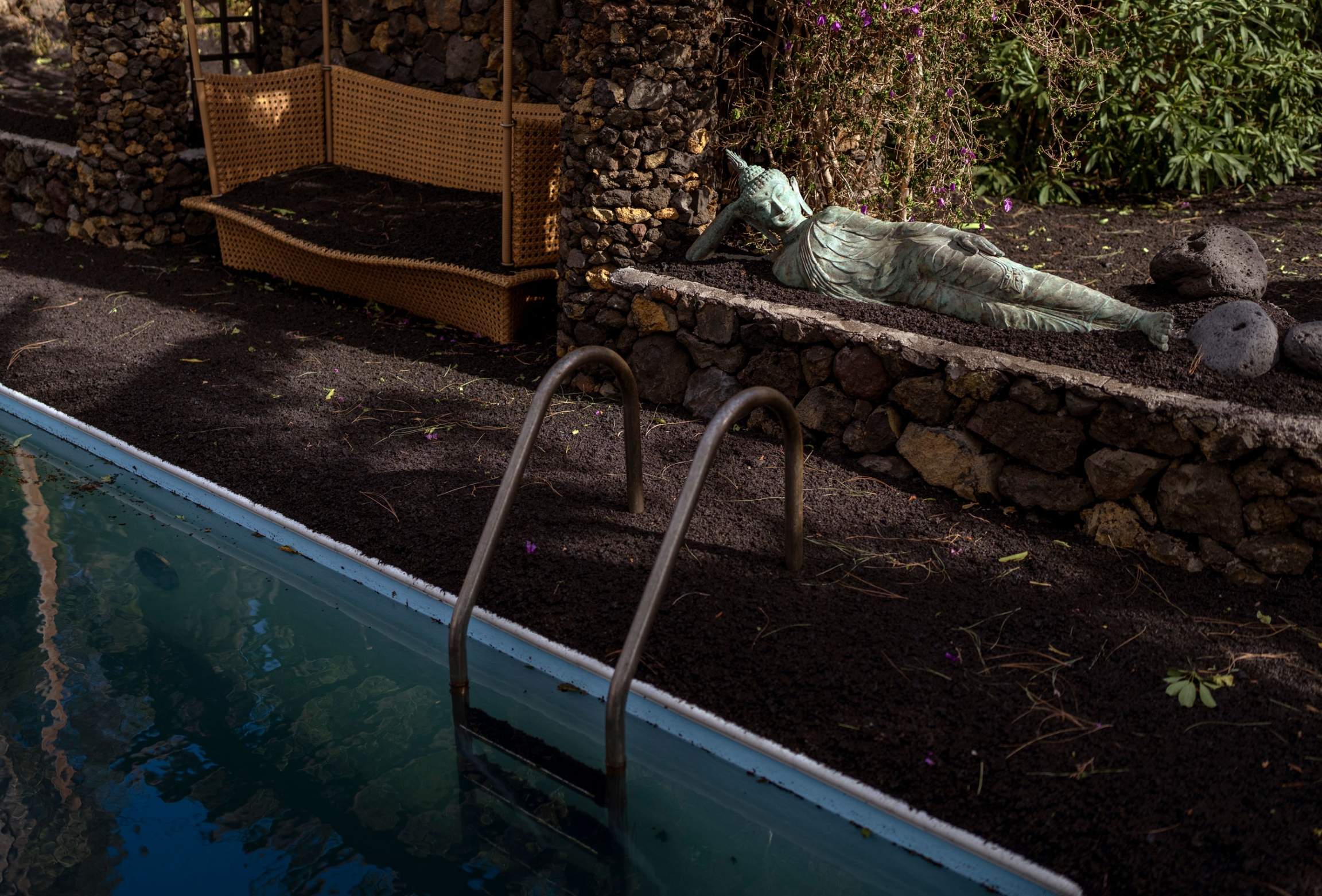 Debris covers the ground of a garden of a house near to where a volcano erupted near El Paso on the island of La Palma in the Canaries, Spain, Tuesday, Sept. 21, 2021.

Mattias Fuchs said rebuilding is not an option for him and his wife, now in their mid-60s. No one knows how long the eruption will last, and it could take years for the lava to settle even if after it subsides, he said. Government regulations also prohibit building in hazardous areas.

“I will only return to close this chapter,” Fuchs said.

Two groups with bookings canceled their trip this week after hearing about the eruptions, evacuations and roadblocks. But the prospect of a night lulled by the volcano’s humming and a rooftop barbeque with the glowing lava flows on the horizon is also attracting new guests.

The weekend is fully booked already, he said.

Villegas said that tourism has taken a hit by the travel restrictions that Spain and many other countries imposed to stop the spread of the coronavirus, but also by a forest blaze that in early August damaged the landscape near Los Llanos.

"What else could beat a pandemic, a wildfire and a volcano eruption in just over one year?”

“Nothing else can go wrong,” he said. “What else could beat a pandemic, a wildfire and a volcano eruption in just over one year?”