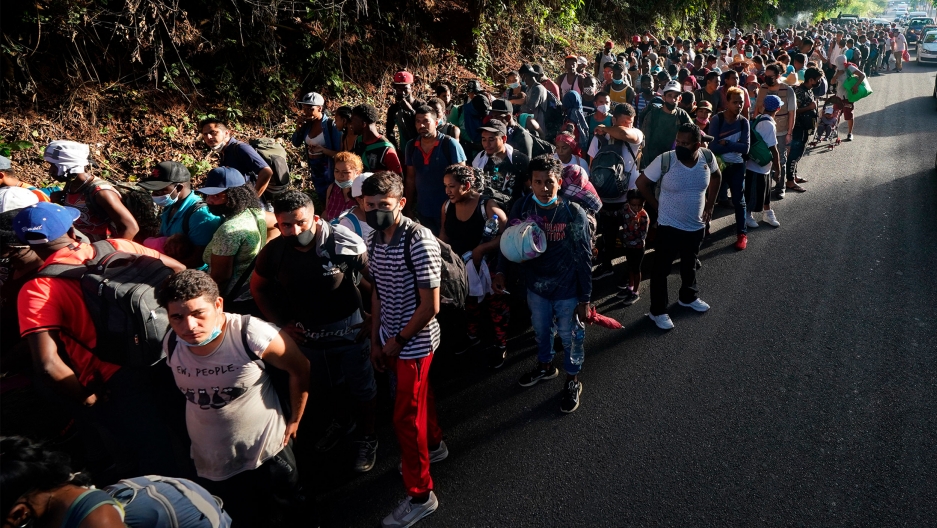 A caravan of migrants head north towards the US-Mexico border, as they depart from Tapachula, Mexico, Sept. 4, 2021.

US-Mexico Border
Thousands of migrants, mostly from Haiti, have set up a makeshift camp under the Del Rio International Bridge on the southern Texas border with Mexico. The migrants are sleeping outdoors, with some saying that water and food are scarce. Many are venturing across the Rio Grande back to Mexico to stock up on supplies. Authorities and migrant advocacy groups say many of the Haitians migrated to Brazil, and other parts of South America, after the devastating earthquake of 2010 and have now embarked on the dangerous trip north to the US, crossing the Darién Gap between Colombia and Panama and navigating smuggling organizations throughout the journey. Nationals from Cuba, Venezuela and Nicaragua are also in the group, with many saying they have received tickets to be processed by US Customs and Border Protection agents. More than 29,000 Haitians have arrived in the US since last October, according to Customs and Border Protection figures.

Netherlands
Dutch Foreign Minister Sigrid Kaag has resigned over the government’s handling of evacuations from Afghanistan following the Taliban takeover, the first Western official to do so. Kaag said she stands by her actions, but acknowledged that the government's slow response to warnings about the situation in Afghanistan meant some local staff and local interpreters for Dutch troops were left behind. The resignation came after the lower house of parliament passed a motion of censure against the government over its handling of the evacuations. The Netherlands airlifted around 2,000 people from Afghanistan in the last two weeks of August.

China
After spending 90 days aboard the Chinese Space Station, three astronauts — Nie Haisheng, Liu Boming and Tang Hongbo — returned safely to Earth aboard the Shenzhou-12 spaceship on Friday. This is China’s longest space mission yet. “With China's growing strength and the rising level of Chinese technology, I firmly believe there will be even more astronauts who will set new records," mission commander Nie told state broadcaster CCTV. Few details about China’s space program — which is run by the military — are available to the public, but similar missions to the space station are expected over the next two years to make it fully functional.

'It is a catastrophe': Afghans are in desperate need of food, humanitarian aid, refugee worker says 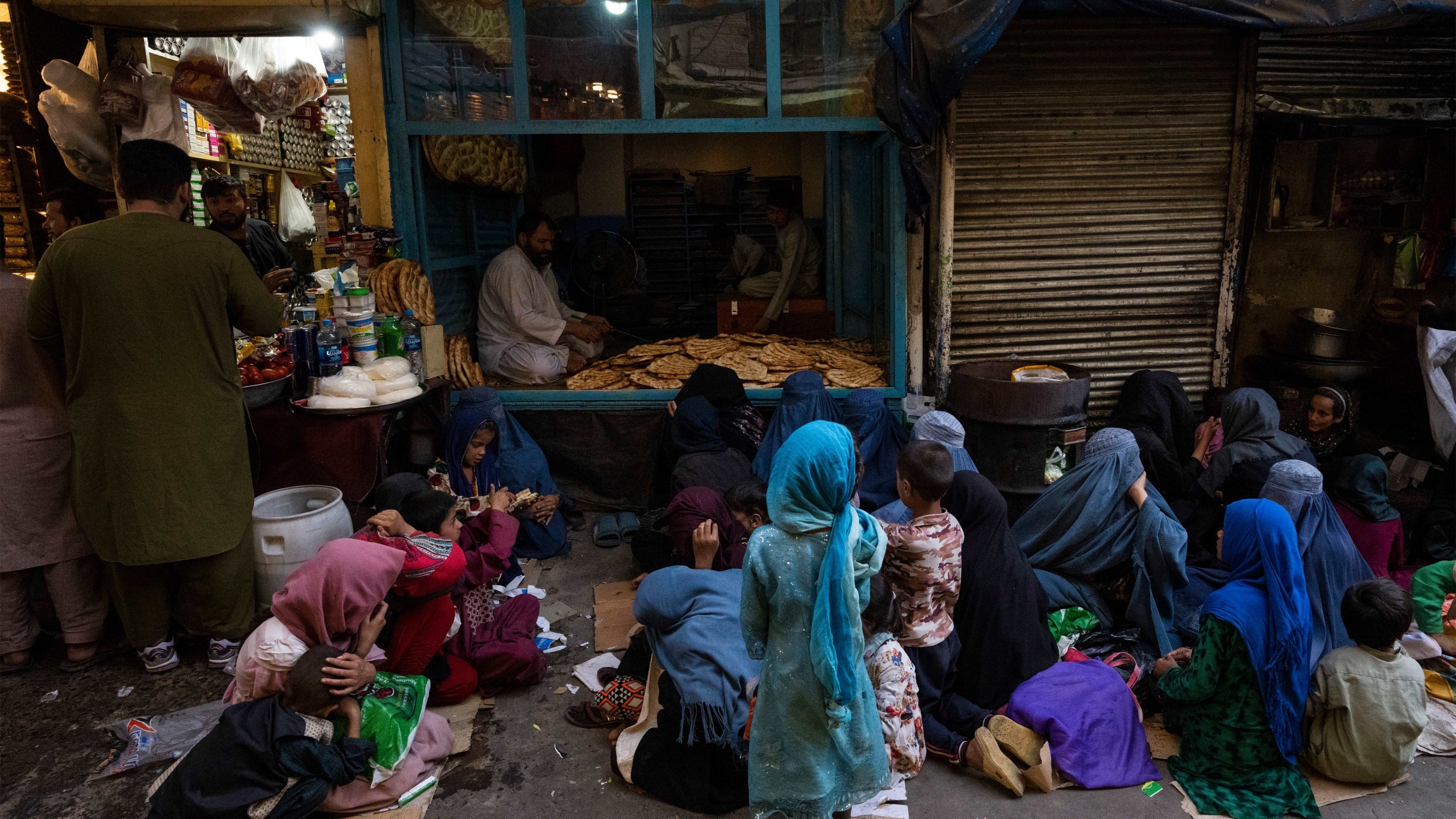 Afghan women and children sit in front of a bakery waiting for bread donations in Kabul's Old City, Afghanistan, on Sept. 16, 2021.

With the Afghan government severed from the international banking system, aid groups, both inside Afghanistan and abroad, say they are struggling to get emergency relief, basic services and funds to a population at risk of starvation amid staggering unemployment and the pandemic, and after 20 years of war.

Astrid Sletten, head of the Norwegian Refugee Council’s office in Kabul, spoke to The World’s Carol Hills about the level of need in Afghanistan and what aid organizations are able to deliver in the current environment.

Norway has one of the world's most ambitious climate change targets. But it's also a major oil producer and exporter. 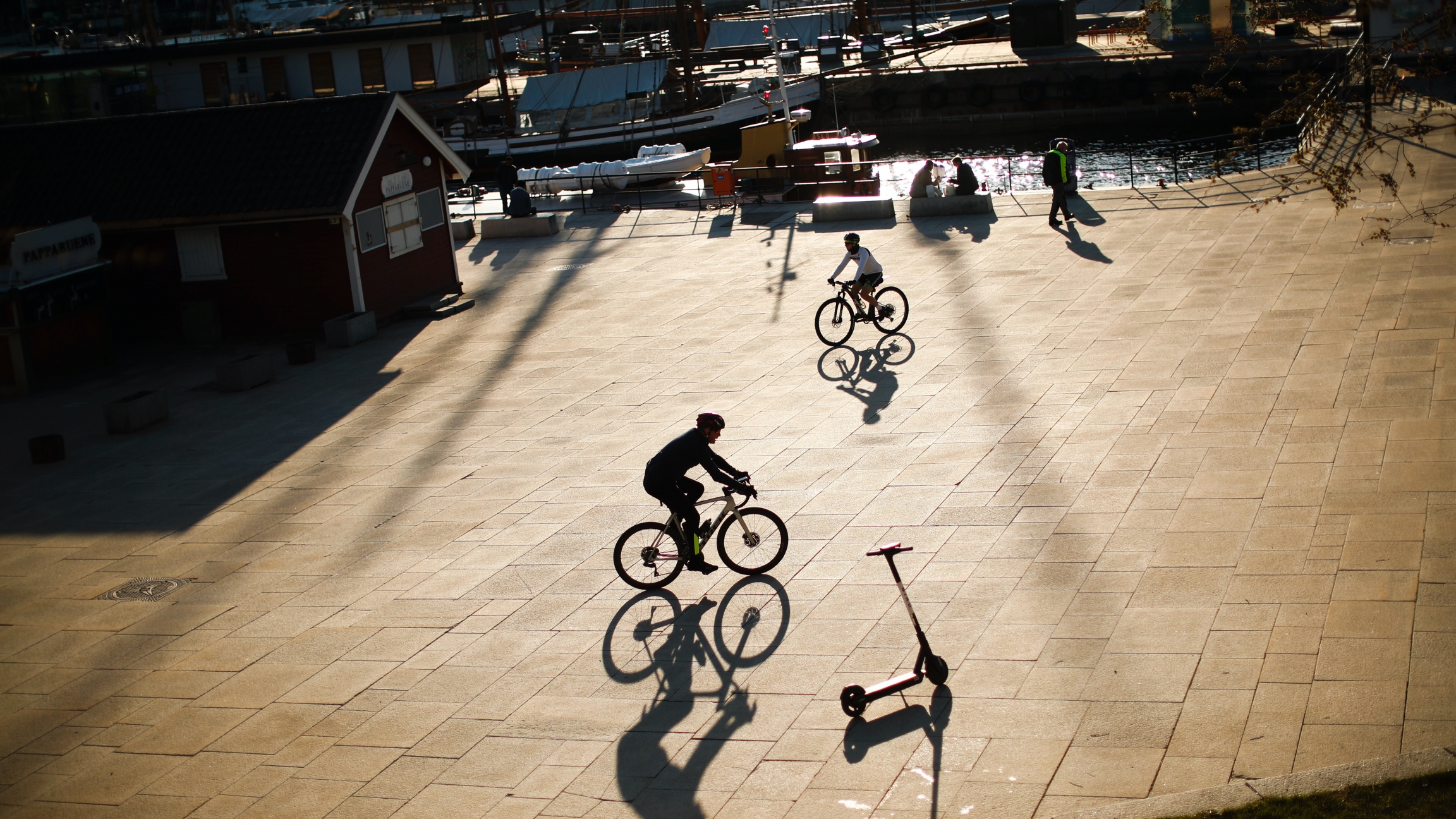 People ride their bicycles at the marina port in Oslo, Norway, April 26, 2021.

The Norwegian captial recently moved its power lines underground due to unprecedented new demands for electricity. Norway is aiming to be carbon neutral by 2030. But the wealth used to achieve this goal comes with an inherent contradiction: It's been built from five decades of oil extraction.

The grass is greener — on the roof of a taxi!

Two taxi cooperatives in Bangkok have put together miniature gardens on the tops of a fleet of abandoned taxis. They've planted a variety of crops — including tomatoes, cucumbers and string beans — creating an eye-catching scene. It's an attempt to draw attention to the taxi drivers and operators who can no longer drive them because of COVID-19 lockdown measures. 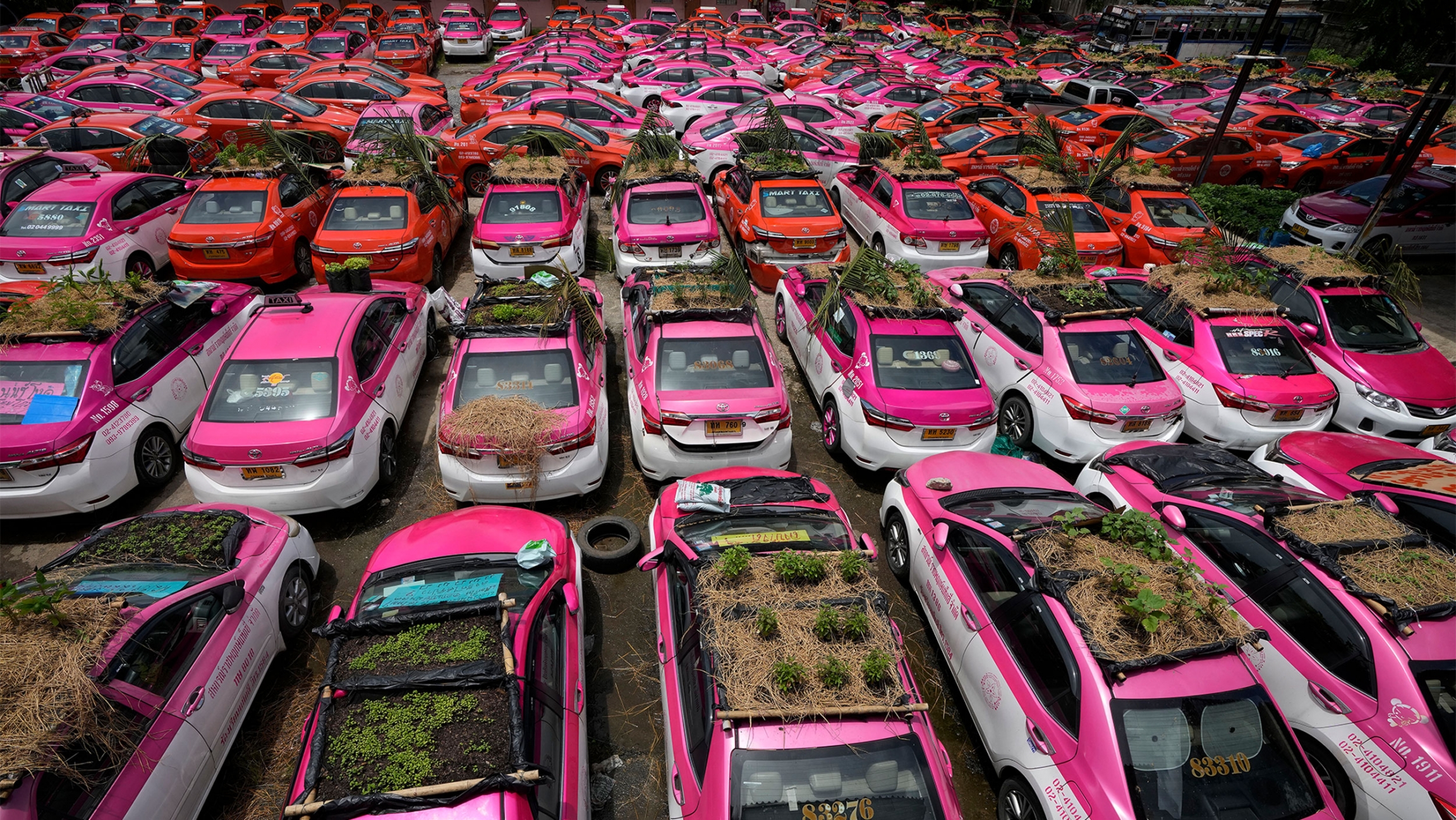 Miniature gardens are planted on the rooftops of unused taxis parked in Bangkok, Thailand, Sept. 16, 2021.

In case you missed it
Listen: Historic new security deal for the Asia Pacific region 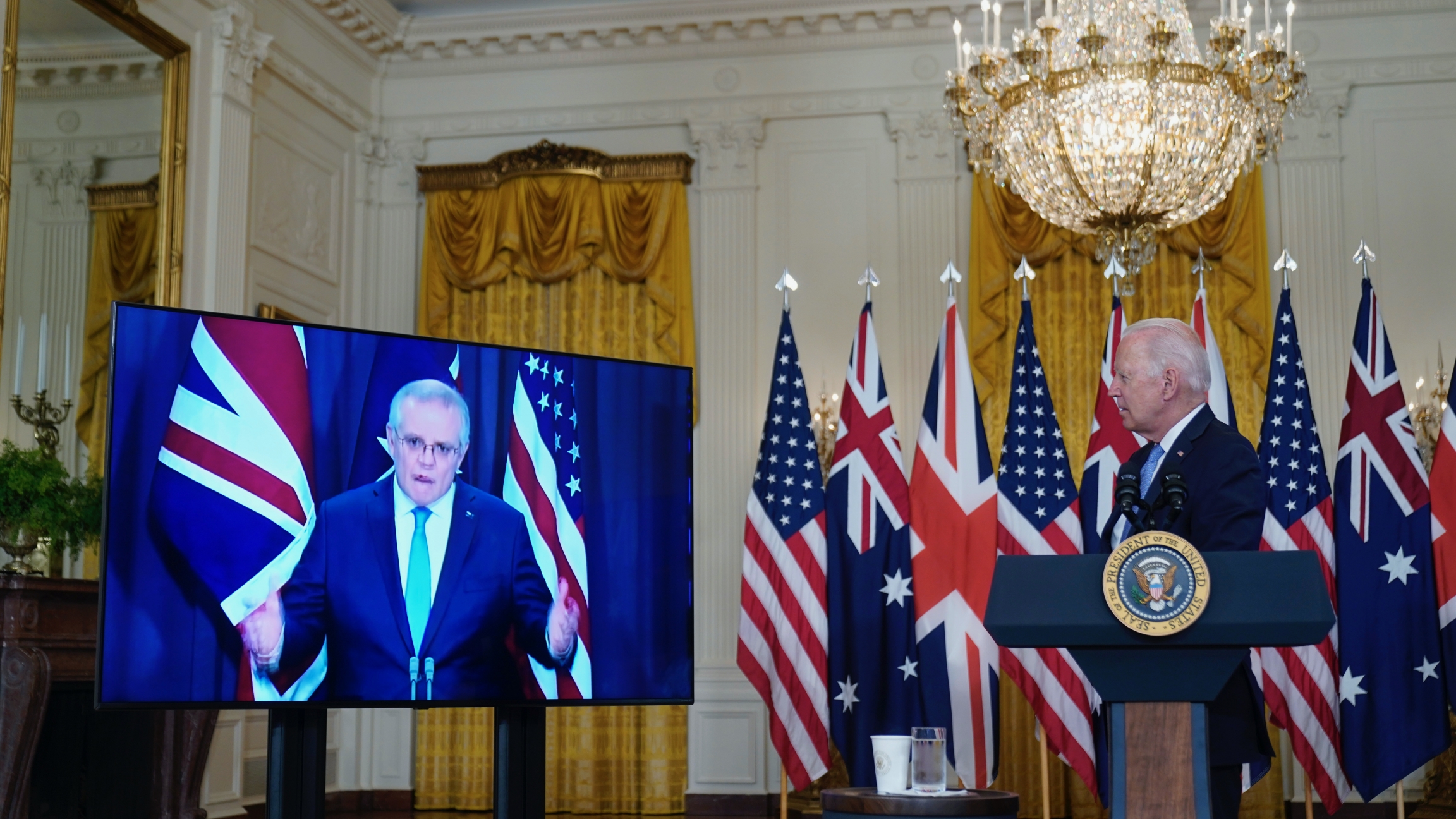 President Joe Biden listens as he is joined virtually by Australian Prime Minister Scott Morrison and British Prime Minister Boris Johnson, not seen, as he speaks about a national security initiative from the East Room of the White House in Washington, Sept. 15, 2021.

President Joe Biden appeared at a virtual joint news conference with Boris Johnson and Scott Morrison, the prime ministers of Britain and Australia, to announce a new security arrangement for the Asia Pacific region. Under the terms of the historic deal, the US will share nuclear submarine technology with Australia. Also, few international humanitarian groups remain in Afghanistan. And, France has declared a health emergency in New Caledonia, as COVID-19 cases there continue to surge. Meanwhile, a law is expected to pass this week in Paris that extends the health emergency to New Caledonia and French Polynesia until mid-November. Plus, in Kenya, entrepreneurs are trying to make camel milk, a traditional pastoralist beverage, the next big drink.