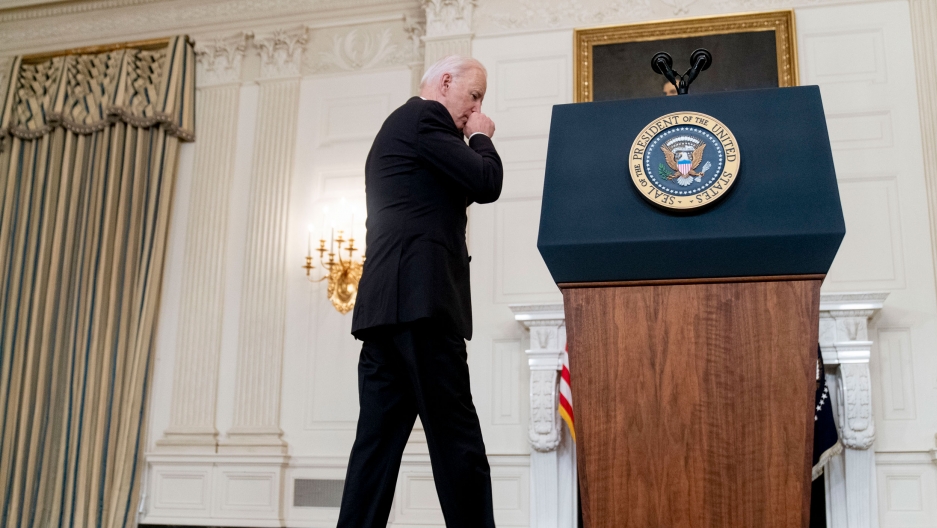 US President Joe Biden arrives to speak in the State Dining Room at the White House, Sept. 9, 2021.

US-China talks
In their first phone call in seven months, US President Joe Biden and Chinese President Xi Jinping discussed a range of hot-button issues. It’s only the second time the two leaders have spoken since Biden took office. Senior officials say the two men discussed trade, espionage and the COVID-19 pandemic. Biden confronted China on cybersecurity but sought to put aside differences and called for cooperation on climate change. Xi blamed US policies for strained relations between the two countries and both sides called for better relations to avoid confrontation. Tensions have also been rising over territorial claims in the South China Sea, China’s widely condemned harsh dealings with the Uyghurs and Hong Kong, US tariffs on Chinese goods and Beijing’s criticism of the US withdrawal from Afghanistan.

Brazil
Brazilian President Jair Bolsonaro has signed a decree changing internet regulations that would block social networks from deleting some posts. The move would allow previously banned content to be reposted. The decree is effective immediately, and may be the first time a country has banned internet companies nationwide from implementing their own rules. Bolsonaro has been using social media to undermine the legitimacy of Brazil’s voting system ahead of next year’s elections, repeating his claims of vote-rigging — which analysts have called out as false — during the country’s Independence Day celebrations this week.

Lebanon
A new government has been announced in Lebanon, following a deadlock that’s lasted more than a year. It comes as the country faces a worsening economic crisis. The Lebanese pound has lost 90% of its value in less than two years. The UN recently estimated that nearly three-quarters of the Lebanese population lives in poverty. Now, parliament will be required to convene and issue a vote of confidence for Prime Minister Najib Mikati’s government. Lebanon has been without a functioning government since the massive explosion at Beirut’s port in 2020 that killed more than 200 people and injured 7,000 others, forcing the government of Prime Minister Hassan Diab to resign. 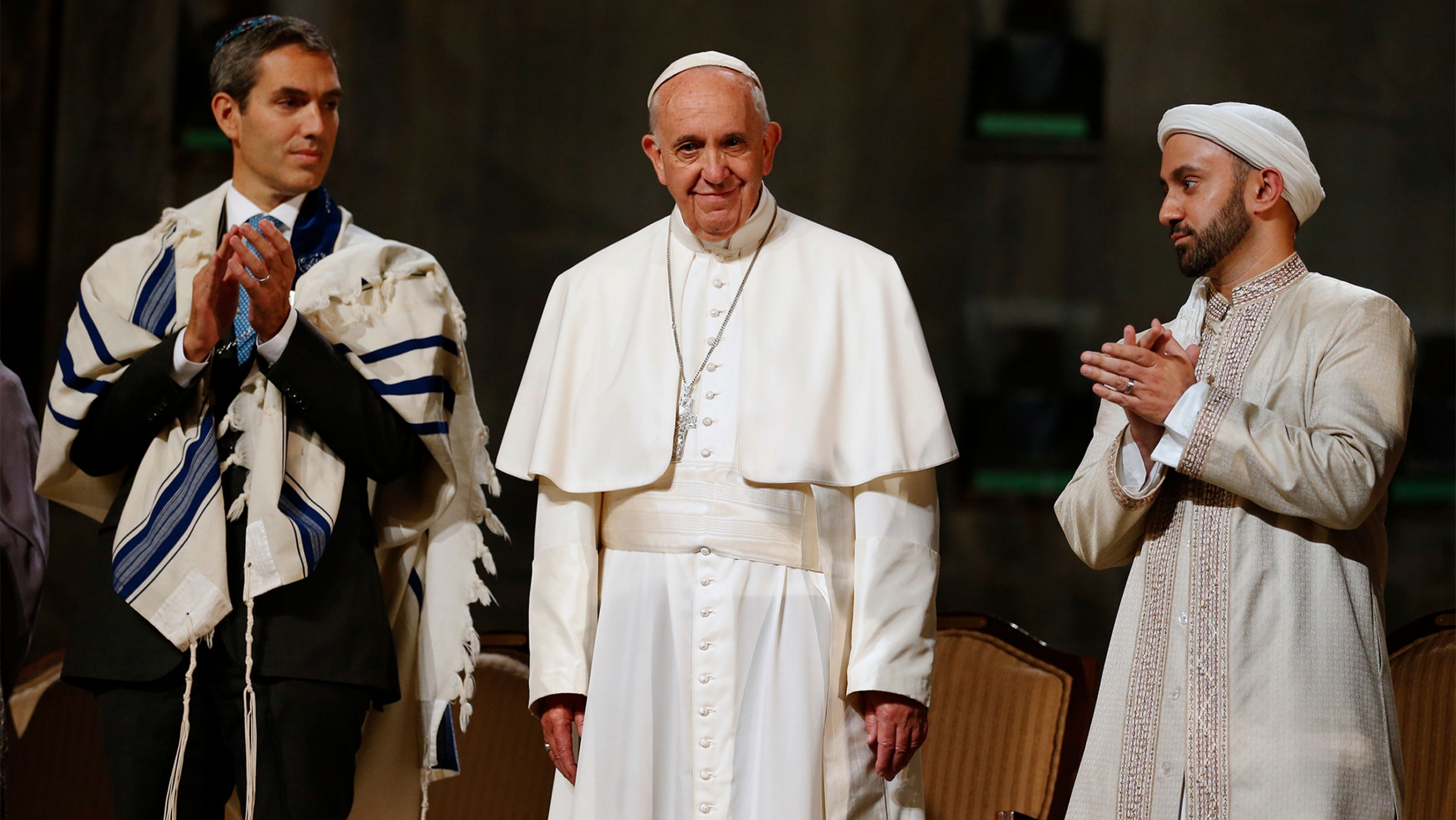 Pope Francis sits with Rabbi Elliot J. Cosgrove (left) and Iman Khalid Latif (right), executive director of the Islamic Center and chaplain to the students at New York University, at a multi-religious gathering during a visit to the 9/11 Memorial Museum in New York, Sept. 25, 2015.

The events of 9/11 touched the lives of just about everyone in the US — especially American Muslims, from discrimination to extra surveillance. Twenty years ago, Khalid Latif was a sophomore at New York University. He's now the executive director and chaplain for the Islamic Center at NYU.

"I've had a lot of different experiences attached to the tragedies of 9/11, I think, that made it very evident that even this construct of a Muslim American, was something now that was coming to the surface, that I think exists within this kind of good-bad-type framework, good Muslim, bad Muslim, moderate, extremist," Latif told The World's host Marco Werman. "There are very few people who are able to just call themselves American without a hyphen of some kind or a dash that prequalifies their American-ness. And now there became a deep dive into Muslims having to identify just how American they actually were. It became something that was evident, especially within immigrant Muslim communities." 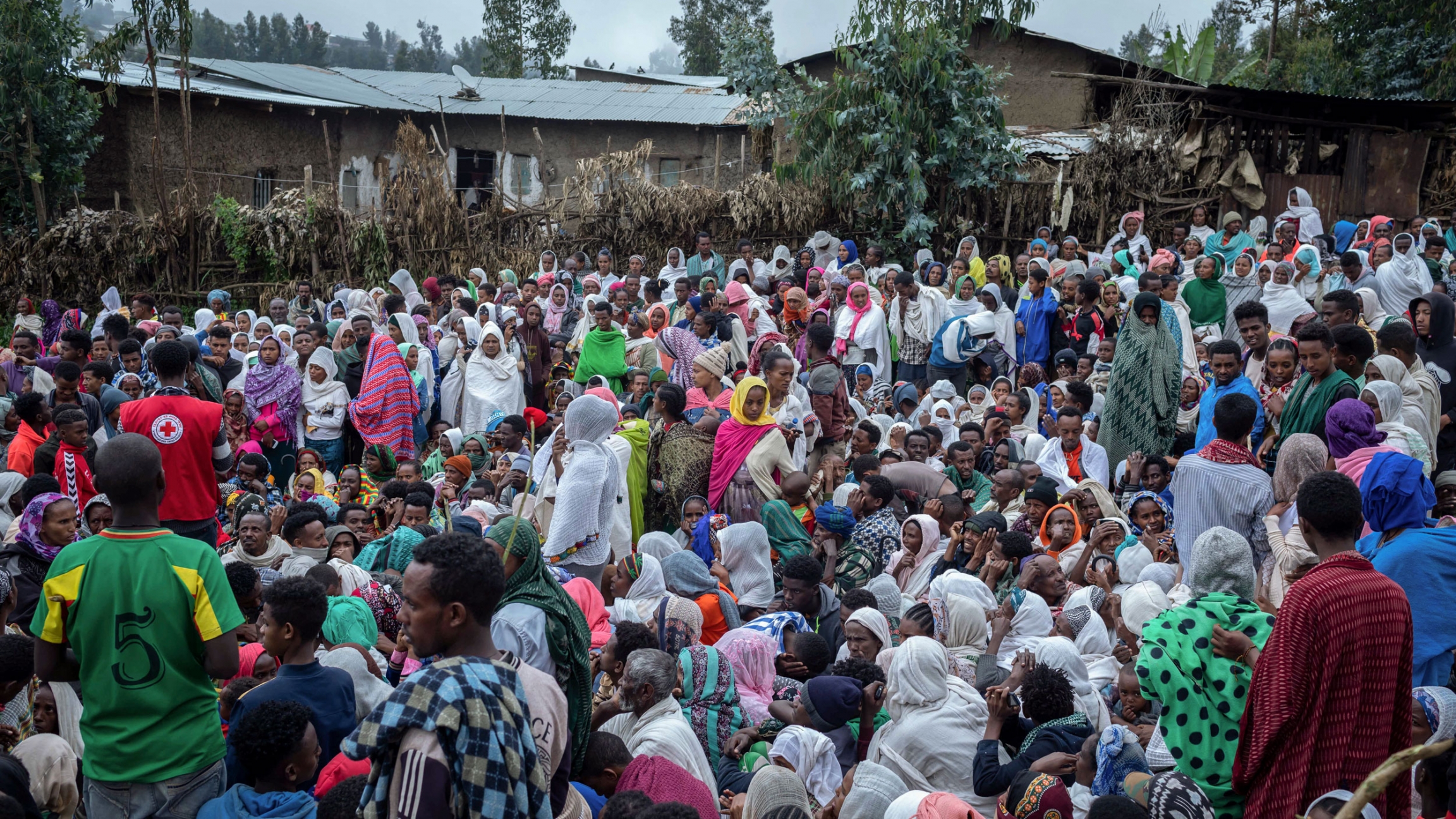 Tigrayan forces have killed more than 120 people in the neighboring Amhara region, according to Ethiopian officials. It’s the latest sign of how the 10-month conflict has extended far beyond Tigray, with deadly consequences.

Grammy award-winning musician Elvis Costello has a new album, but you won't hear his voice on it. This time, it’s a remix featuring voices from across the Spanish-singing world. The album keeps the original instrumental trademarks, like the organ and the beat, giving crossover listeners the chance to recognize the original songs. Costello said the instrumental mix worked with the voice of the artists in a different way, bringing a new perspective. 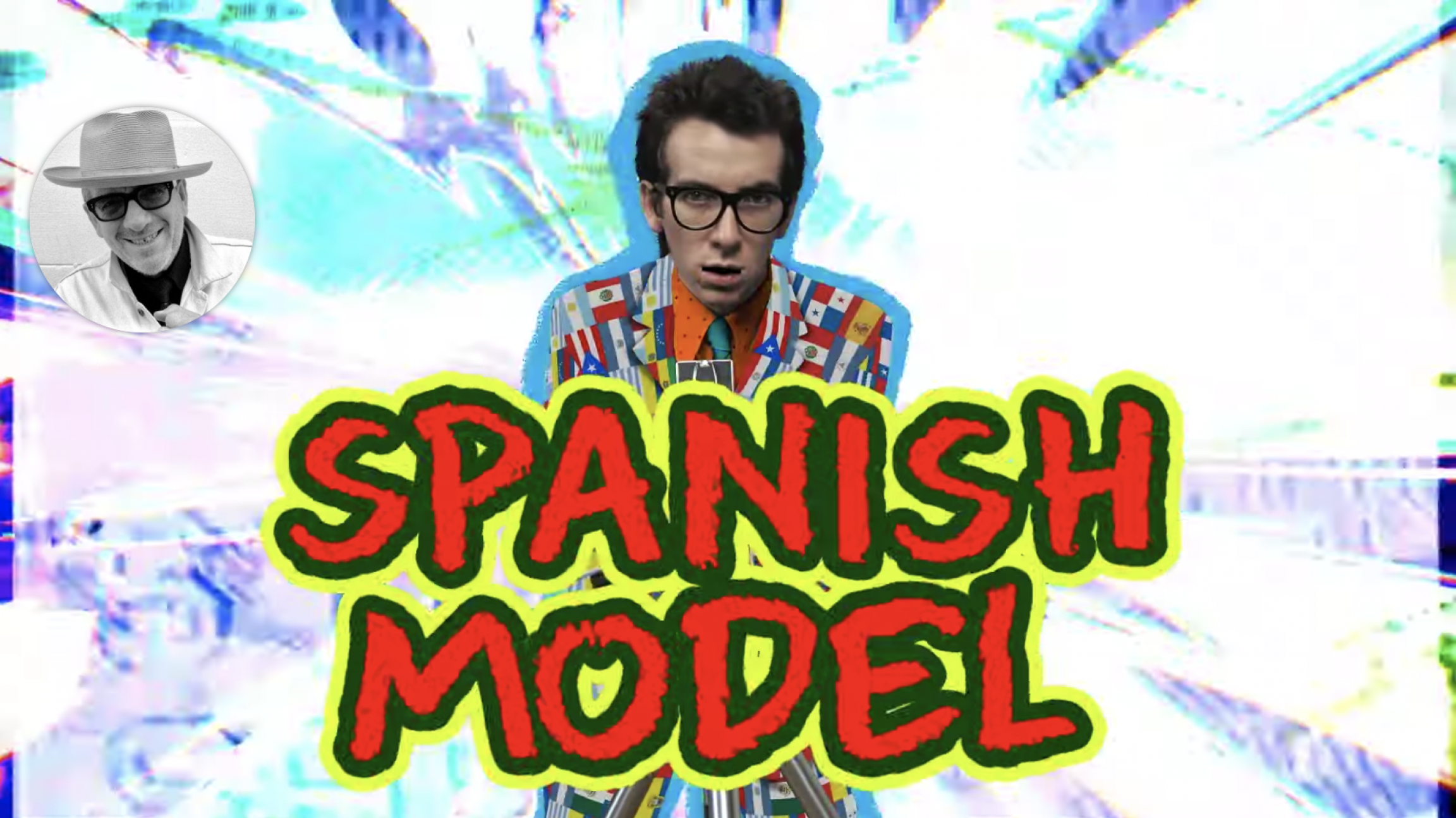 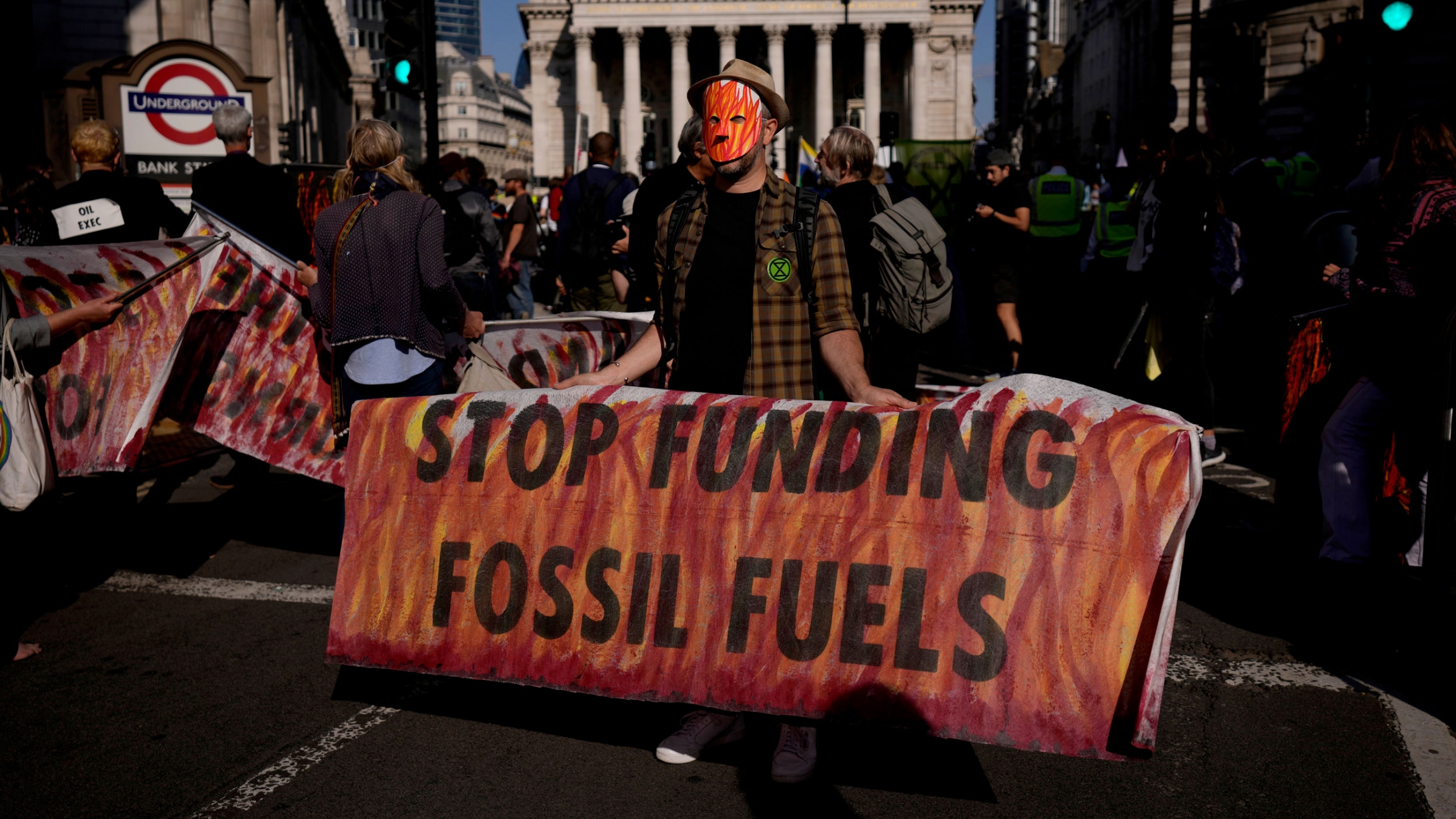 In this Thursday, Sept. 2, 2021 file photo, an Extinction Rebellion climate change activist holds a banner backdropped by the Bank of England, at left, and the Royal Exchange, center, in the City of London financial district in London.

A network of 1,500 environmental groups are calling on the British government to delay the UN climate summit scheduled for November in Glasgow, Scotland. They're worried that delegates from vulnerable nations won't be able to attend due to travel restrictions, lack of access to vaccines and the cost of quarantine hotels. And, soon after 9/11, the US created a centralized terrorist watchlist, a major tool used by many local and federal agencies to identify “known or suspected terrorists.” How has the watchlist grown since 9/11? Also, Elvis Costello has a new album, but you won't hear his voice on it. His classic release, “This Year's Model,” just got a remix with vocalists from across the Spanish-singing world.