Alejandro Prieto has spent a lot of time along the US-Mexico border. The Mexican photographer was drawn to the region to document the wildlife and the devastating impact of the border wall on the delicate biodiversity and animal migratory patterns.

Now Prieto's image of a roadrunner bird, staring up at the enormous US-Mexico border wall, has been named the grand prize winner in the Bird Photographer of the Year competition. Prieto won the prestigious photo contest after his image was selected from 22,000 entries.

In this interview, Prieto discribes how he captured the photograph and his project along the US-Mexico border region. 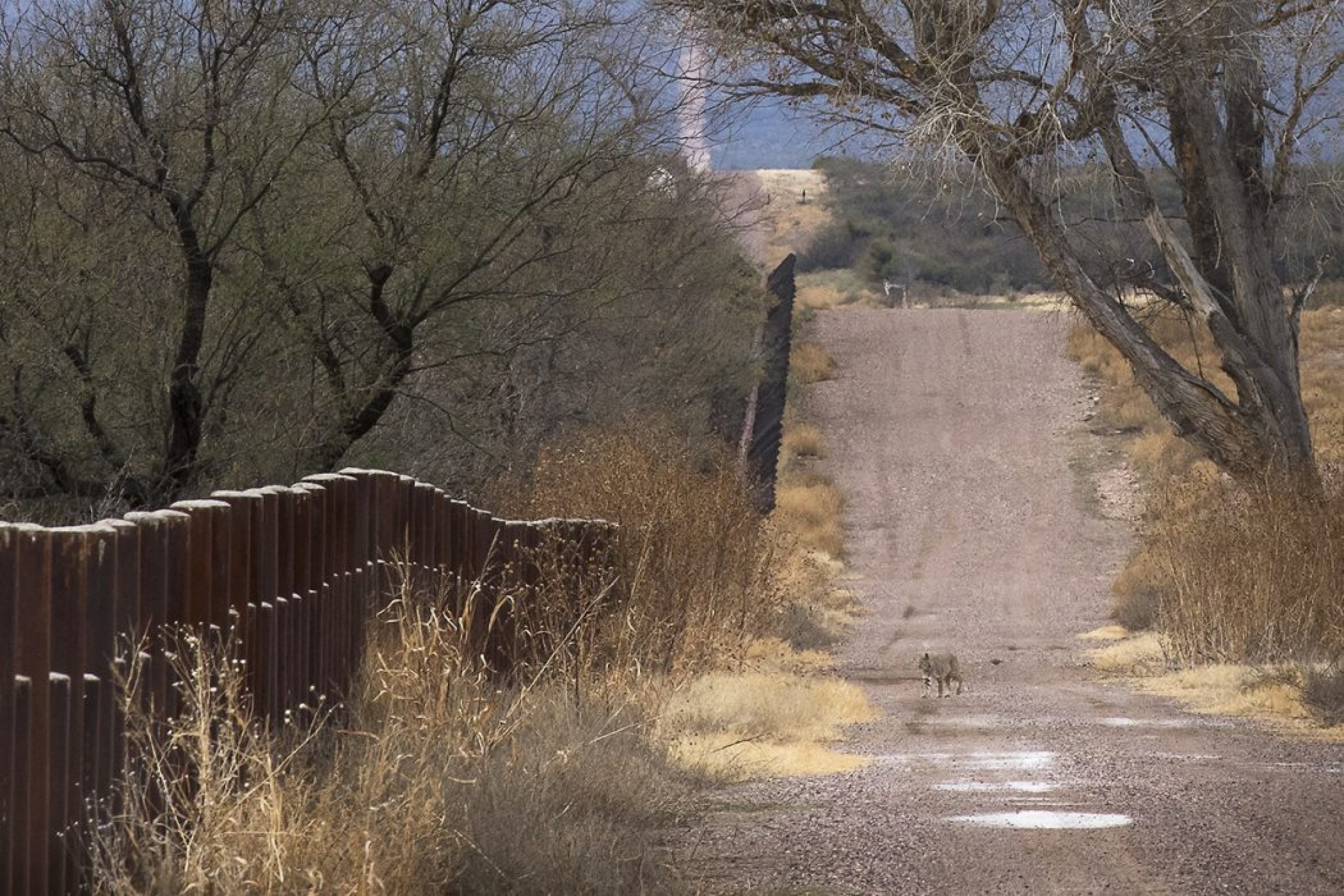 An animal walks along a road used by the US Border Patrol to monitor the US-Mexico border.

Steven Davy: How did you come up with your border wall project?
Alejandro Prieto: I started thinking about this project because I heard the news about immigration and about many, many issues at the border between Mexico and [the US]. But, I never heard about the problems that this wall is causing all the wildlife that live in this area. And after I decided that I wanted to do it, I started to do a lot of research at home — trying to get contacts, trying to get to know the different areas. The border is very extensive — almost 2,000 miles. So, I needed to focus on those areas that allowed me to get images of wildlife. I spent, maybe 16 months, all day and through all the territory from California to Texas. It's well known that many migratory species live in this area. It's very important for these species to move. So, my first thinking was, what's going to happen to these species? Even more important, some critically endangered species, like the jaguar, migrate through the region. There are only a few jaguars left living in the United States. So, constructing a big wall will be the end for these species in the United States. There are more than 1,500, between animal and plant species, living in this area. 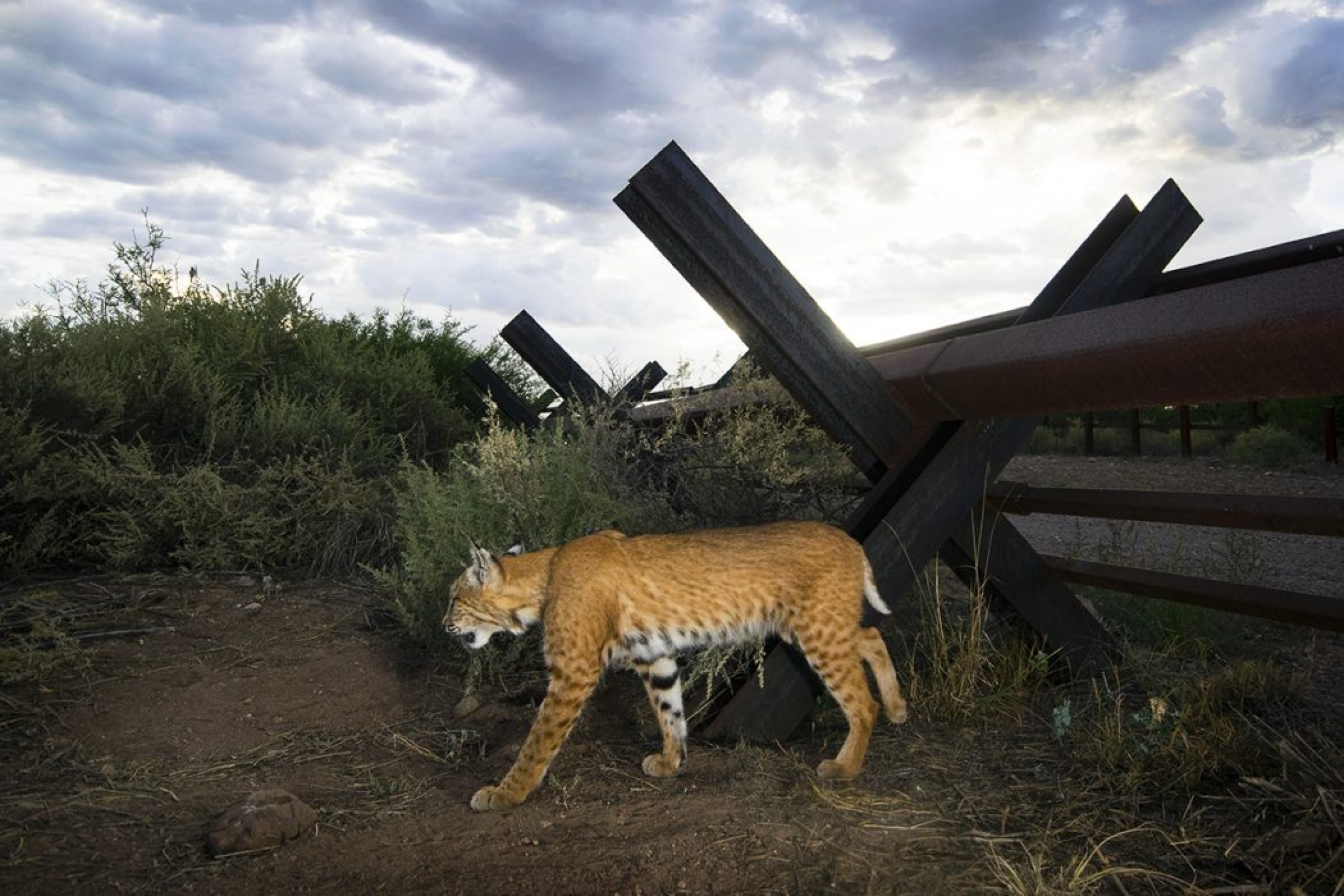 A bobcat roams the US-Mexico border.

How did you undertake photographing wildlife across such a long border?
I spent most of the time between the state of Arizona in the United States and Sonora in Mexico. This place is very full of wildlife. I set camera traps and captured many images of these animals moving from one place to another [on] a daily basis. For my camera traps, I used a system with a digital camera, several flashes, and I use the movement sensor. I tried to make a little studio in the forest. The components of the camera traps are not something that you can buy at any photography store. I had to build all the equipment for the cameras and the flashes, because they are going to be there for a long time, exposed to rain and exposed to different temperatures. It's a sophisticated and complicated system. But at the end, you can get images of great quality and the cameras worked for a long time. It's very important to show, not just the picture of an animal, but the whole environment. 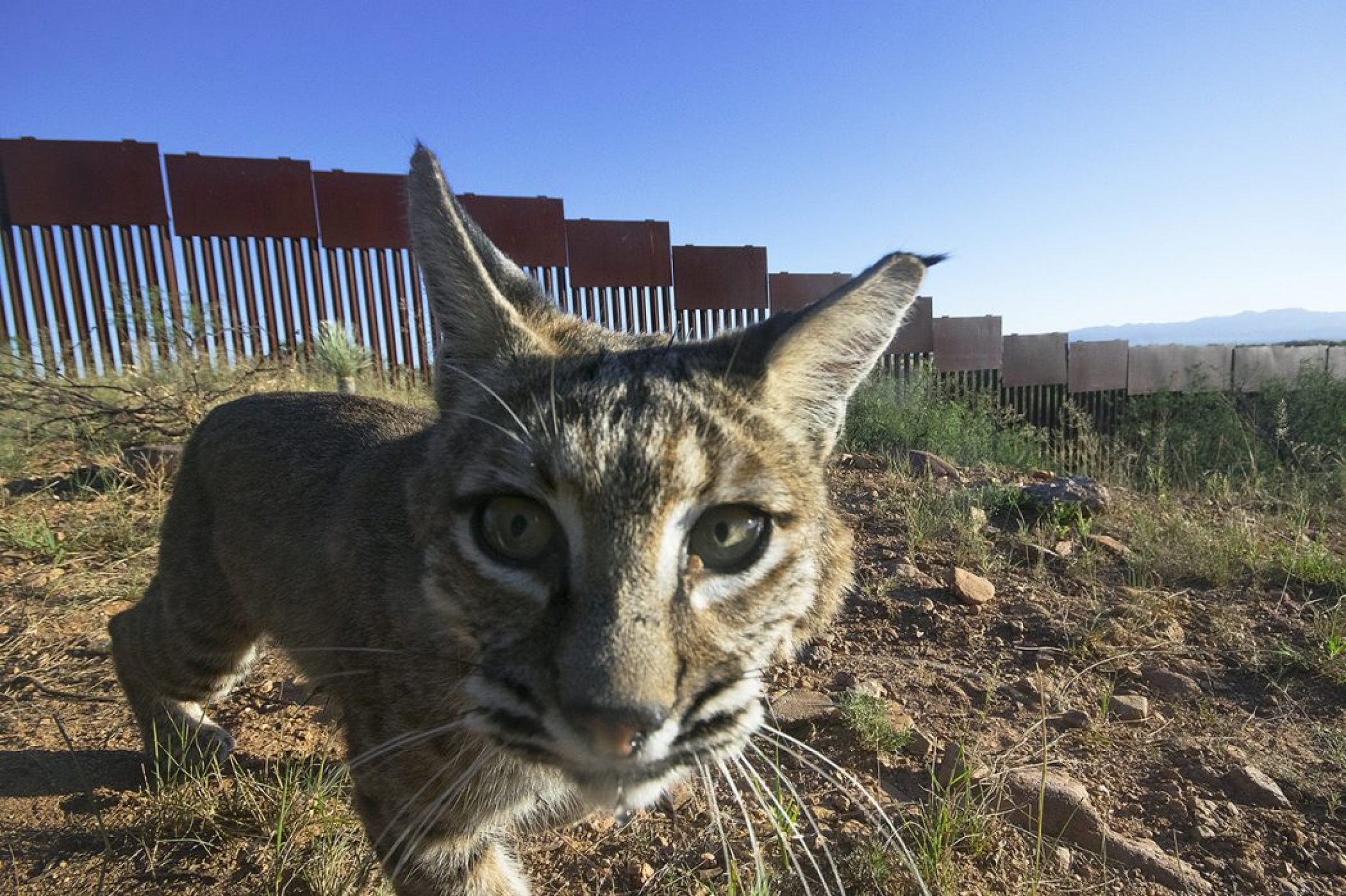 A bobcat near the US-Mexico border passes by one of Alejandro Prieto's camera traps.

What challenges did you face?
This was a special project [for] me, because I've never worked in an area like this before. I have to say that it has been the most difficult one, because I had to face many, many challenges. One of them was insecurity. This place is used for Mexican drug cartels to send drugs to the United States. Another challenge I had to face is the Border Patrol harassment. And I should say, another challenge was extreme weather. At some points of the year, temperatures can get very, very high. I even lost three cameras. Of course, I don't know who took them. But this place is huge for immigrants to cross from Mexico to the United States. So, I needed to find places where the animals move and I needed to find those places where the people don't. It's important to say that the border is extensive, that the big wall is not along the whole border. It's only in some parts. In other parts it's permeable for wildlife and the animals can still cross through these these barriers. And some other places, there are not barriers at all. There are now permeable barriers being replaced by the big wall. Once you put in a big wall, it's not permeable for almost all the animals, only really small animals cross through the bars.

"Blocked" by Alejandro Prieto was named grand prize winner of the Bird Photographer of the Year competition 2021.

Tell me about the photograph of the roadrunner.
The roadrunner photograph was taken pretty close to Naco in the state of Arizona. And I was driving my car along the road, when I suddenly saw this little bird appear from the forest. It walked to the half of the road and stopped for a while looking straight to the wall. That gave me enough time to stop the car. And I took the photograph through the window. It was a really quick moment. I managed to take a couple of pictures. The roadrunner, it just looked at the wall and then it went back directly [from] where where it appeared. It was a time during the Trump administration, where, not only was it enough to have the wall, but they set wire in many segments of the wall. This razor wire looks terrible and it can do a lot of damage. It's important to mention that anyone can say, "but birds can fly." Many birds, like the roadrunner or wild turkeys or many species of owls, they don't fly high. They have more terrestrial movements. And this wall will affect them. To be there and to witness the wall, it's really sad to me. And when you look at the remoteness of the places, it feels so strange. 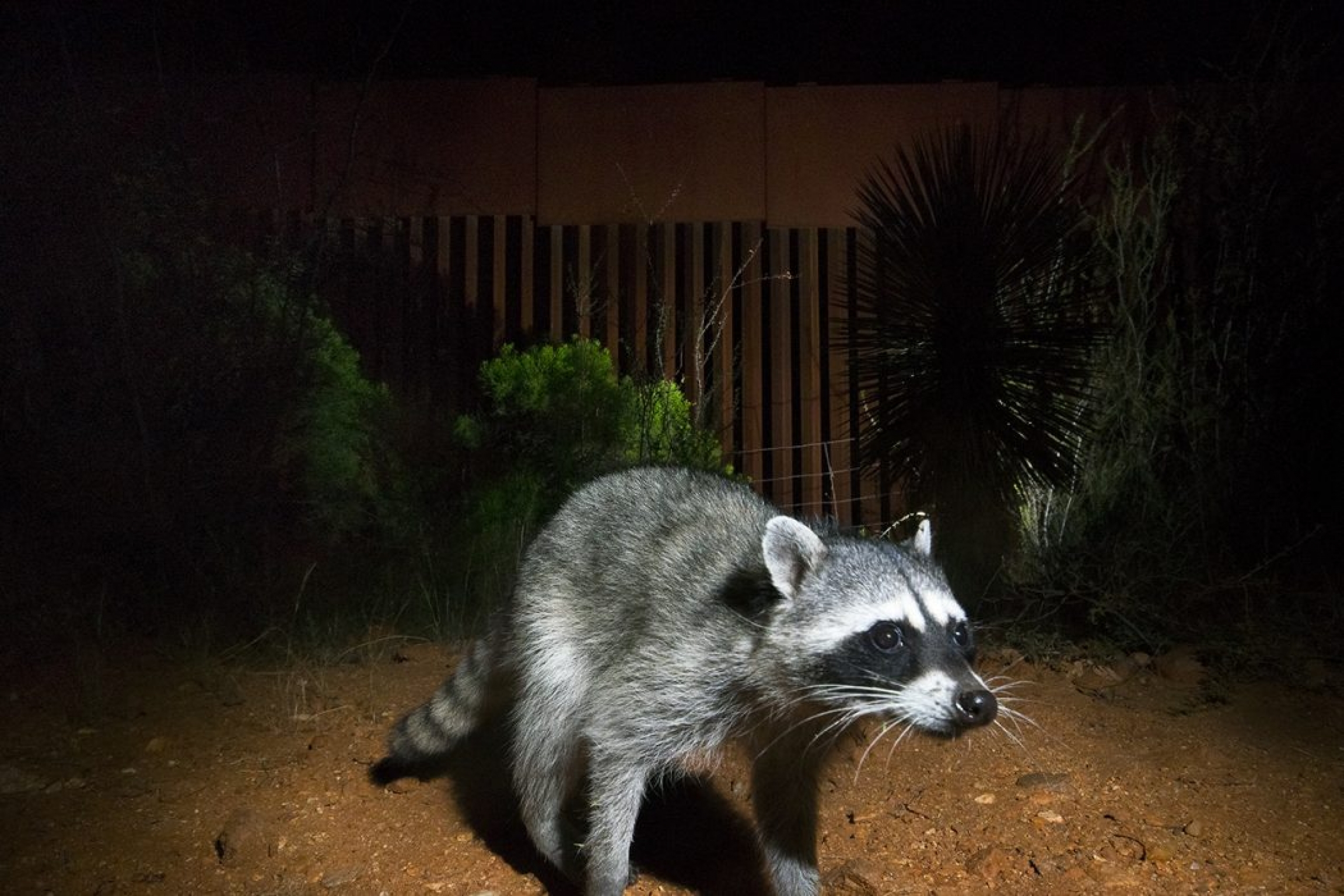 A racoon is photographed a night using the motion sensor and flash from Alejandro Prieto's camera trap.

When did you know you had a truly special photograph?
I knew it was a good shot. But, I didn't realize how good it was until, probably weeks later, when I was in my house checking out the pictures. That's where I knew that this was a very strong and a very powerful picture. I took this picture with, not a wide angle lens, but a 70-200mm lens, which was enough. You can see the environment and you can see the bird very good. 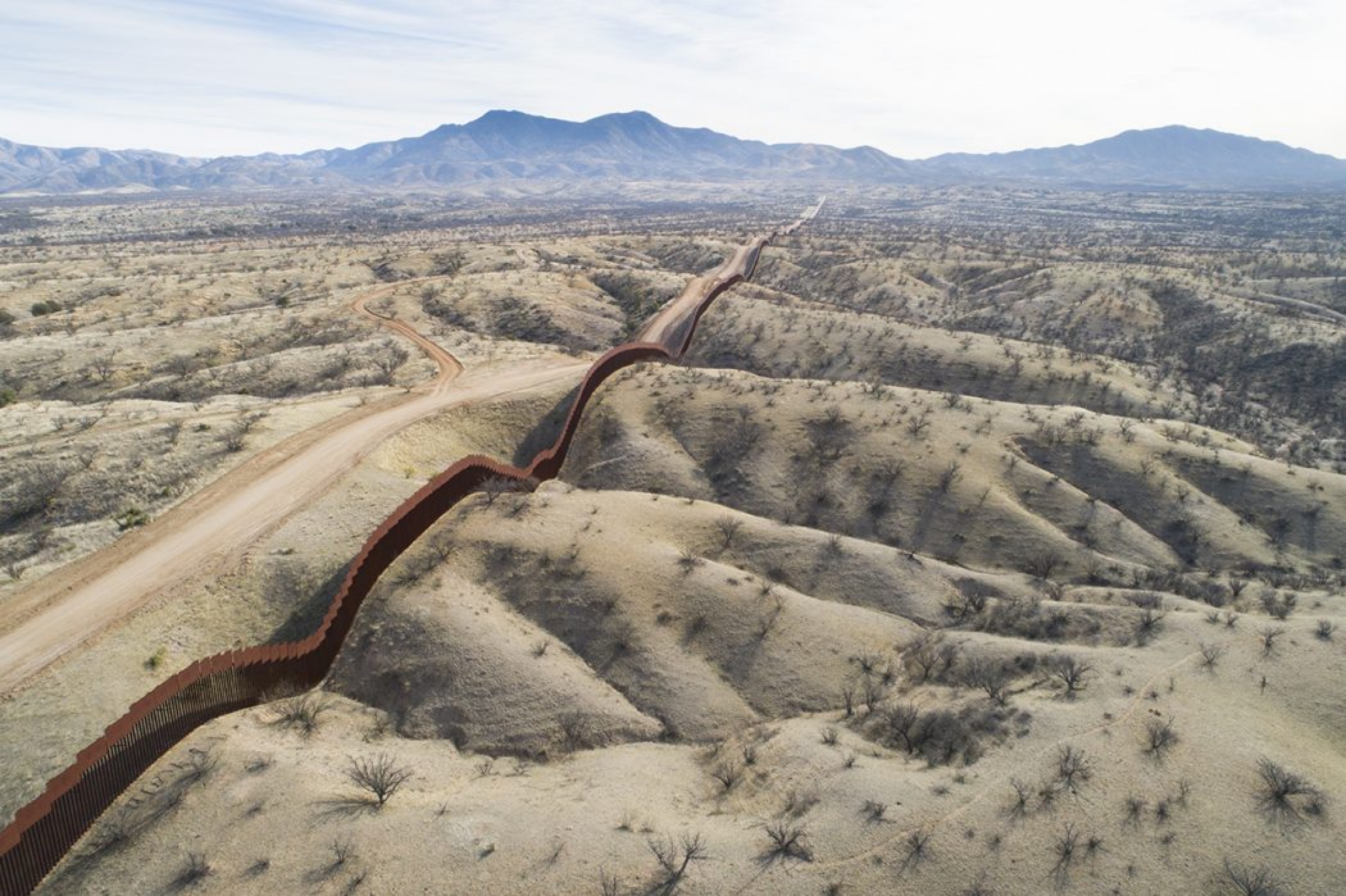 A long section of wall carves through the terrain, separating the United States and Mexico.

What has the response been to this photograph and project?
I've received a lot of comments from people. A lot of people told me that this picture has touched them in different ways. And I think this is very important, because the goal of my work is to provoke these feelings and hopefully to provoke changes, to provoke people to act. So, I have been receiving a lot of comments of people that these pictures have touched them in a good way.