Taliban fighters in Afghanistan who strode into Kabul's presidential palace last weekend were not some ragtag militia.

The insurgents are backed by huge profits from many sources, from drugs to wealthy foreign donors. Money helps.

But can the Taliban make the ledgers work to govern?

Related: Women are worried about what Taliban control means for them 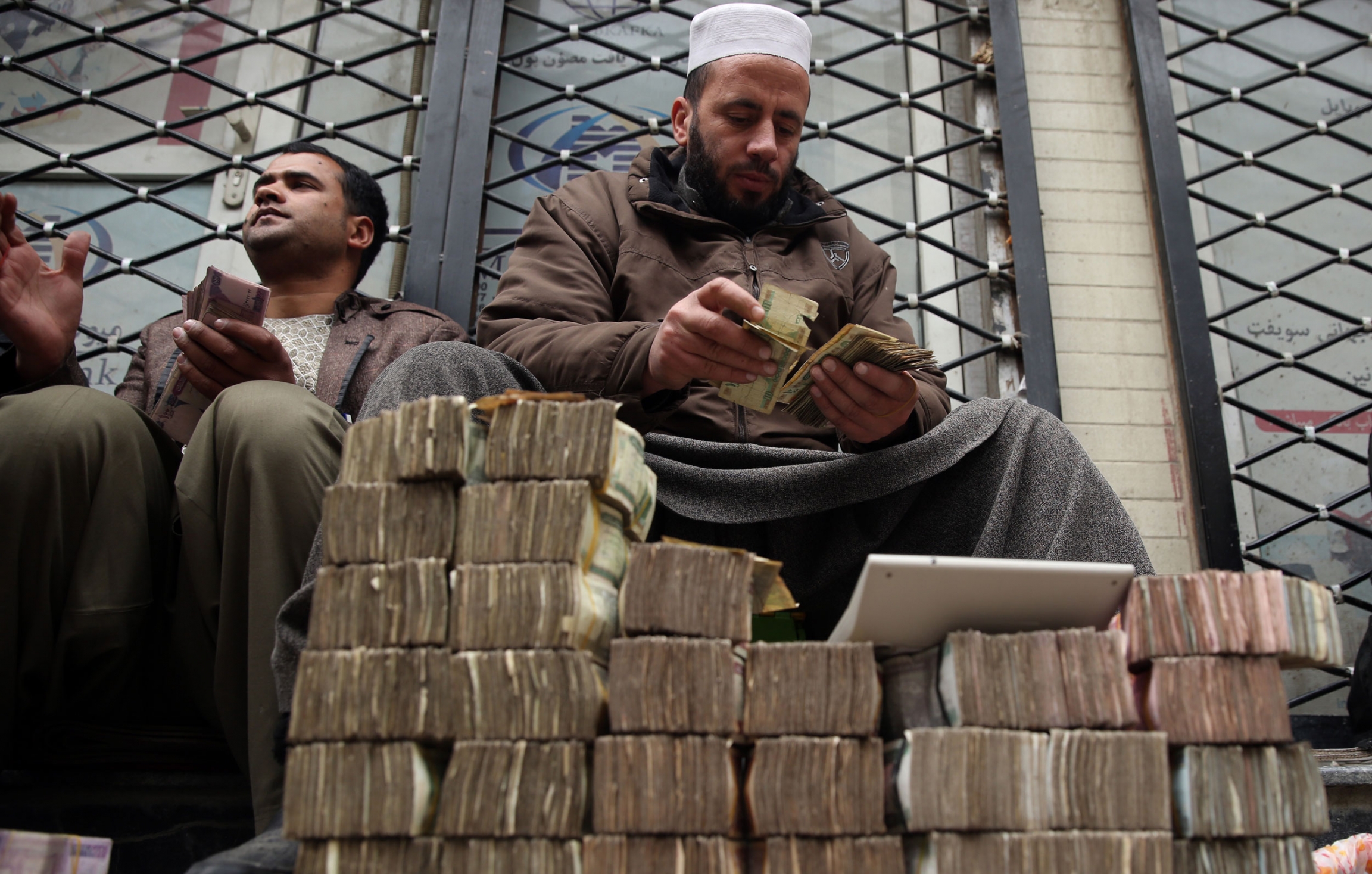 In this Monday, Jan. 12, 2015 file photo, An Afghan money changer, right, counts a pile of currency at the Money and Exchange Market in Kabul.

Marco Werman: What sort of financial resources does the Taliban come to government with? How much are they worth?
Vanda Felbab-Brown: Well, the Taliban has been taxing any kind of legal and illegal economy in Afghanistan in areas where they had influence. So, drugs were a very important source of money. They would tax NATO trucks supplying NATO troops at the peak of the US and NATO military presence. Those profits probably surpassed even the profits from drugs, tens of millions, maybe hundreds of millions of dollars, but it would tax anything — like sheep. Obviously, you get much more money from drugs than sheep. And they also taxed international and Afghan government aid programs to communities. But the international element of assistance on which the Afghan government is so dependent is going to shrink dramatically. And there is simply no way that the Taliban can offset those losses very easily, even if it manages to persuade countries like China to continue economically engaging with Afghanistan.

Related: Former warlord discusses his militia against the Taliban

And what about Russia and Pakistan? Are they also a source of cash for the Taliban?
Those flows are minor. They might make a difference to some extent for running insurgencies. They are nowhere adequate to be running a country. Pakistan's own financial resources are constantly in trouble, with the Pakistani economy struggling. Russia has never been very generous with terms of large international aid in Afghanistan. In other parts of the world, Iran, which also has significantly improved its relations with the Taliban, is bankrupt. So, outside of the Western donors, the principal sources of economic aid for a Taliban government would be the Gulf, Saudi Arabia, United Arab Emirates, potentially Qatar and potentially China. And Western aid is likely going to diminish rapidly, which will have massive, multifaceted repercussions for stability of the country, of the government and social and economic conditions in the country.
Although the Taliban are in charge in Kabul right now, they don't really hold the purse strings to Afghan's central bank. Its president has fled the country. So, if the Taliban really wants to jump-start the country, whatever that means, in their eyes, it looks like they can't spend as they might want. What are their options?
Well, there are stories emerging that Taliban officials have been looking for the money in the central bank, but it's quite revealing of the stories, in fact, accurate, of the limited financial-economic sophistication that they have. A lot of the central bank's money are not piles of cash held in a place. They are financial accounts that exist in electronic form, and they might be reserves that are parked abroad. For years now, Afghanistan would every so often receive a plane full of hard cash as part of the delivery of a portion of its central bank's reserve. Last week, the plane didn't arrive because of the instability. So, there is limited liquidity, limited spending capacity in terms of cash in Afghanistan, currently, and of course, operating international banking accounts, understanding international finance, understanding how to convert assets such as bonds into any kind of liquidity is not something that the Taliban has any kind of experience with. It would have to be able to persuade technocrats, allow Afghan technocrats to continue working for its Ministry of Finance.
Without financing, you can't really run a government. So, what political scenarios could this potentially long period of government inaction portend, do you think?
We're very likely going to see significant economic decline. That's obviously going to have grave repercussions for Afghan people. The Taliban is effective in delivering order. It can be a brutal order, but it has knowledge and capacity to stop crime. But, for delivering school, it will need to rely on teachers who will need to be able to be paid by someone. And much of this financial capability will go radically down. Most significantly, the United States is likely not going to be paying for $2 billion for the Afghan security forces, as it has been before the Taliban takeover. So, that means that some number of soldiers, say 100,000 soldiers will now be unemployed and unpaid. The Taliban will need to be paying its own fighters. So, clearly, how the Taliban negotiates with international actors will be critical, whether it can sustain the economy as it existed or whether the economy will rapidly go bankrupt and banditry, frustration, protests will start emerging.
It'll be interesting to see what happens then. Again, more challenges for the Taliban on accessing money. Afghanistan's previous government, we have to say it was never flush, but it did regularly receive planeloads of cash from the US government and it was used to pay salaries of officials and keep the wheels of government just turning. There were bulk shipments of dollars expected as late as last Sunday, but it never arrived. How important is hard currency? Will the end of that infusion of cash be a big shock for Afghanistan's economy?
At the end of the day, liquid cash is crucial. And if that money is not delivered, if it stops coming, one of the quite rapid economic effects will be that poor people will find it hard to buy food, even just basic survival on a day-to-day basis. It's important to mention, though, that the Taliban leadership has very minimal understanding of how to interact with donors, they're, in many ways, enormously naive. They have little technical capacity. They are not people with financial degrees, but they also are politically naive in terms of constraints and conditionality issues. And so, that will be really a hard learning curve for them with an impact on the lives of Afghan people.