When Islam Soydoğan gets up in the morning, he puts on a checkered sports coat and a flat cap. He leaves the sleepy village where his family cares for hundreds of sheep and drives into town, carrying kilos and kilos of white, salty cheese.

In the eastern Turkish city of Van, a market devoted entirely to cheese serves up a regional specialty made of sheep’s milk and wild herbs, gathered in the mountains. 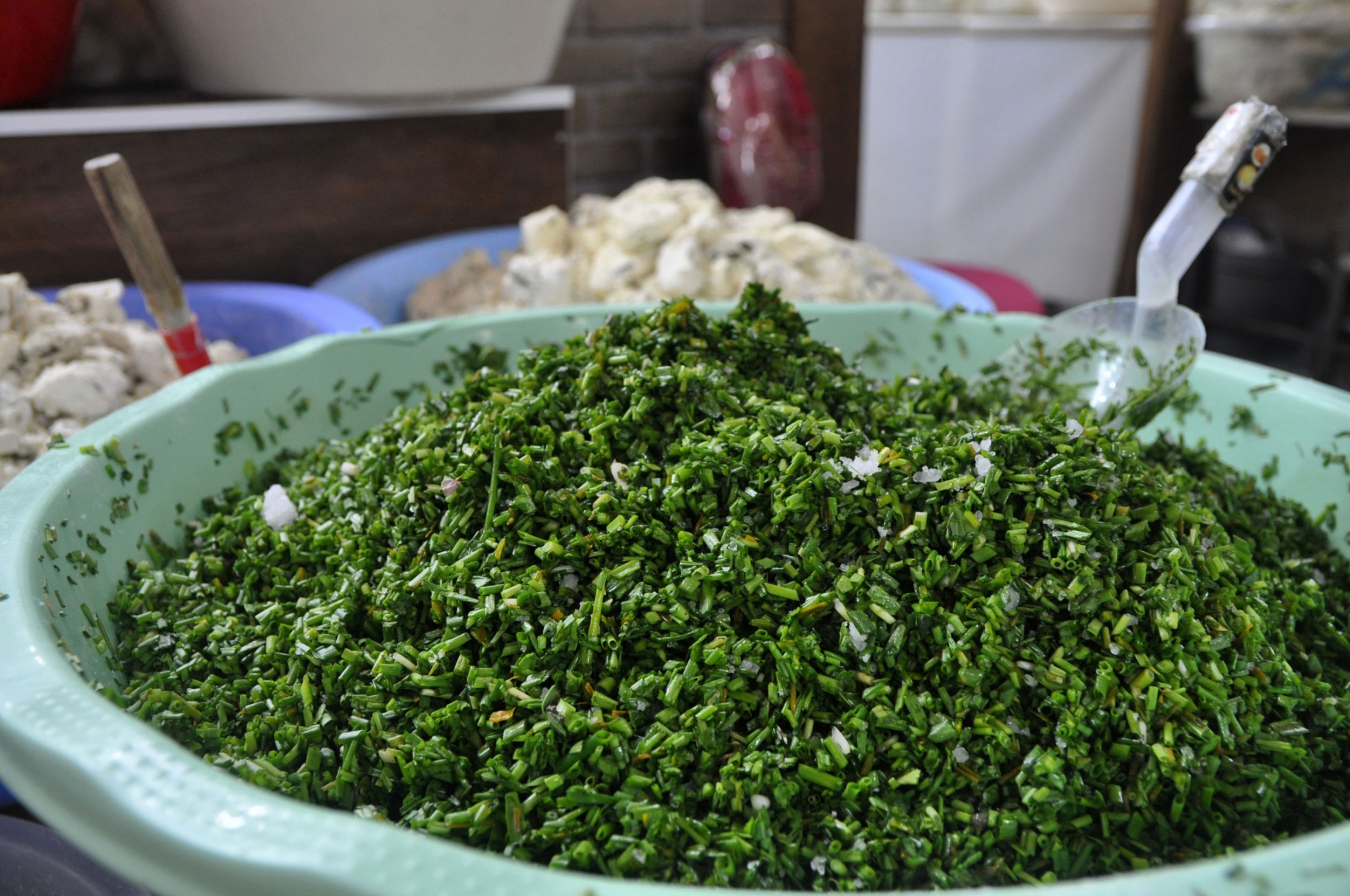 Herbs used in Van Otlu Peyniri vary, but are generally collected in the mountains by village children after snowmelt. They include wild garlic or leeks, mountain thyme, fennel, or mint and wildflowers.

High costs and competition from corporate cheesemakers are leading some traditional suppliers to give up. But Soydoğan’s cheese is among the best.

“Ever since I’ve known myself, I’ve made this cheese."

“Ever since I’ve known myself, I’ve made this cheese,” he said in Kurdish, through a translator.

The 63-year-old father of four says that producing this cheese is a community affair. Village children are sent to gather wild herbs like garlic, mountain thyme and wildflowers. The mixture is heated on a stove, mixed with enzymes, and cured for months. 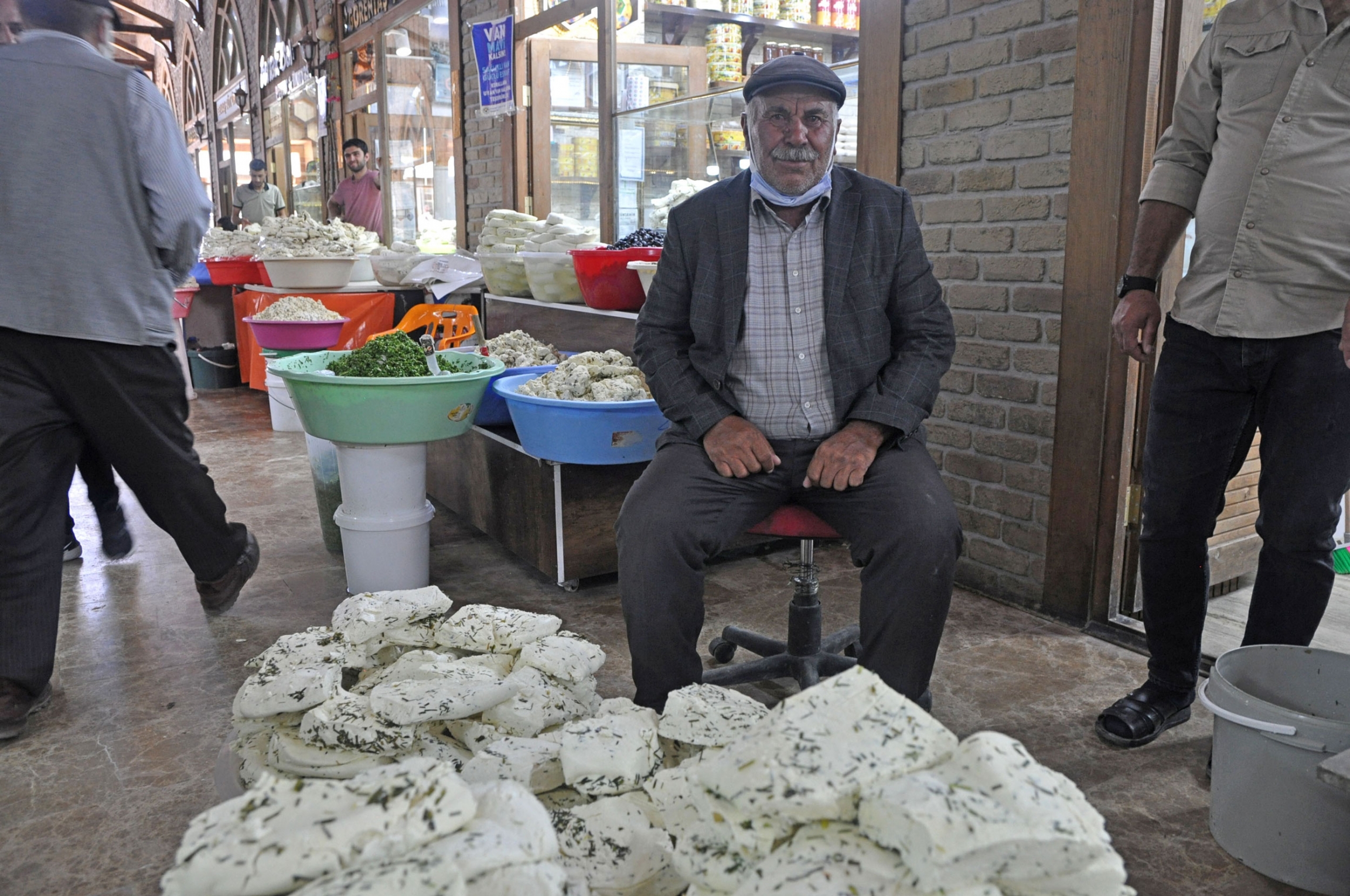 A cheese producer who gave just his first name, Islam, sits with 150 kilograms of Van Otlu Peyniri, a special regional cheese made with raw sheep’s milk and wild herbs. He says his flock of four hundred made enough milk for this much cheese in just a couple of days.

The taste is salty like feta, but deeper and earthier.

“This is a kind of breakfast, in summer,” said Angel Istek Alcu, a translator for this story. She tried a piece and sighed. “This cheese, and watermelon. It’s great.”

This special cheese is one of several dishes consumed during a traditional Van breakfast, which local tourism authorities have asked UNESCO to include on its list of the world’s Intangible Cultural Heritage.

Van is Turkish by law but Kurdish by culture — centuries ago, it was the center of an ancient Armenian kingdom. In this cheese market, almost every shop is devoted to Van’s regional specialty.

There are soft and hard Van cheeses, one that’s aged underground and another that’s crumbly and usually mixed with yogurt. Cheesemongers also offer plastic tubs of pickled herbs to serve with cheese. 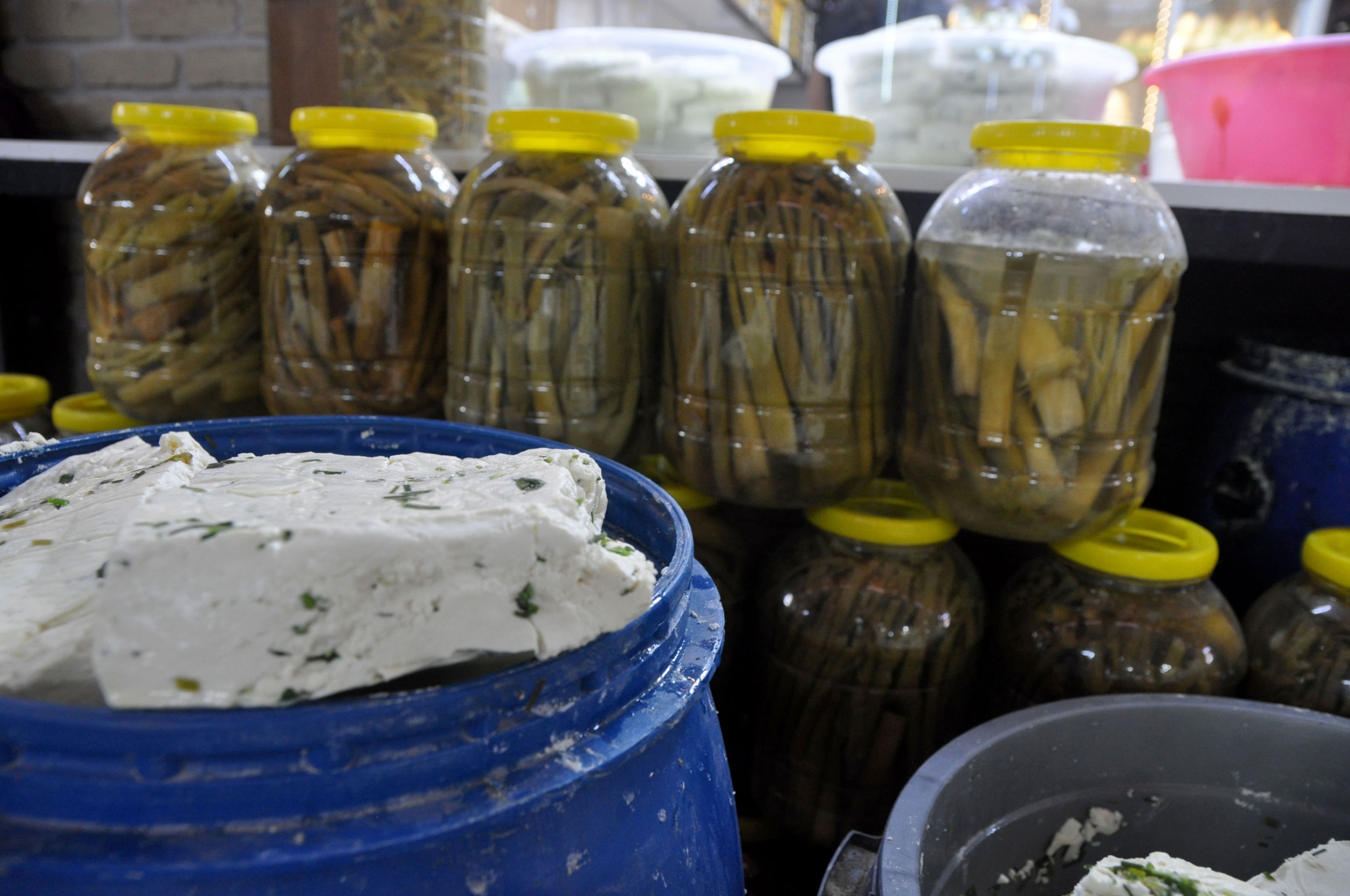 Plastic jugs of pickled wild herbs, used in local Van cheese, stand behind the star of the show.

Van residents love their cheese — and so does the rest of Turkey. Behind one shop, workers pack and seal big plastic containers for shipment across the country.

Van is known for its traditional cheesemaking ways, where villagers care for their own sheep. But that way of life is slowly fading away, explained Hasan Kayhan, who acts as a spokesman for the cheese market. Real Van cheese, he says, isn’t always real.

“The Americans taught us how to cheat,” he said.

In the 1930s, he said, Turkey began importing powdered milk from the West. So much so, that people in Kayhan’s village called it “American powder.” Now, milk powder is used by less scrupulous cheese producers to keep costs down. The cost of feeding sheep through the winter, he said, has tripled.

“For six months you have to feed them, they don’t eat grass and give milk. You pay from your pockets,” Kayhan said. 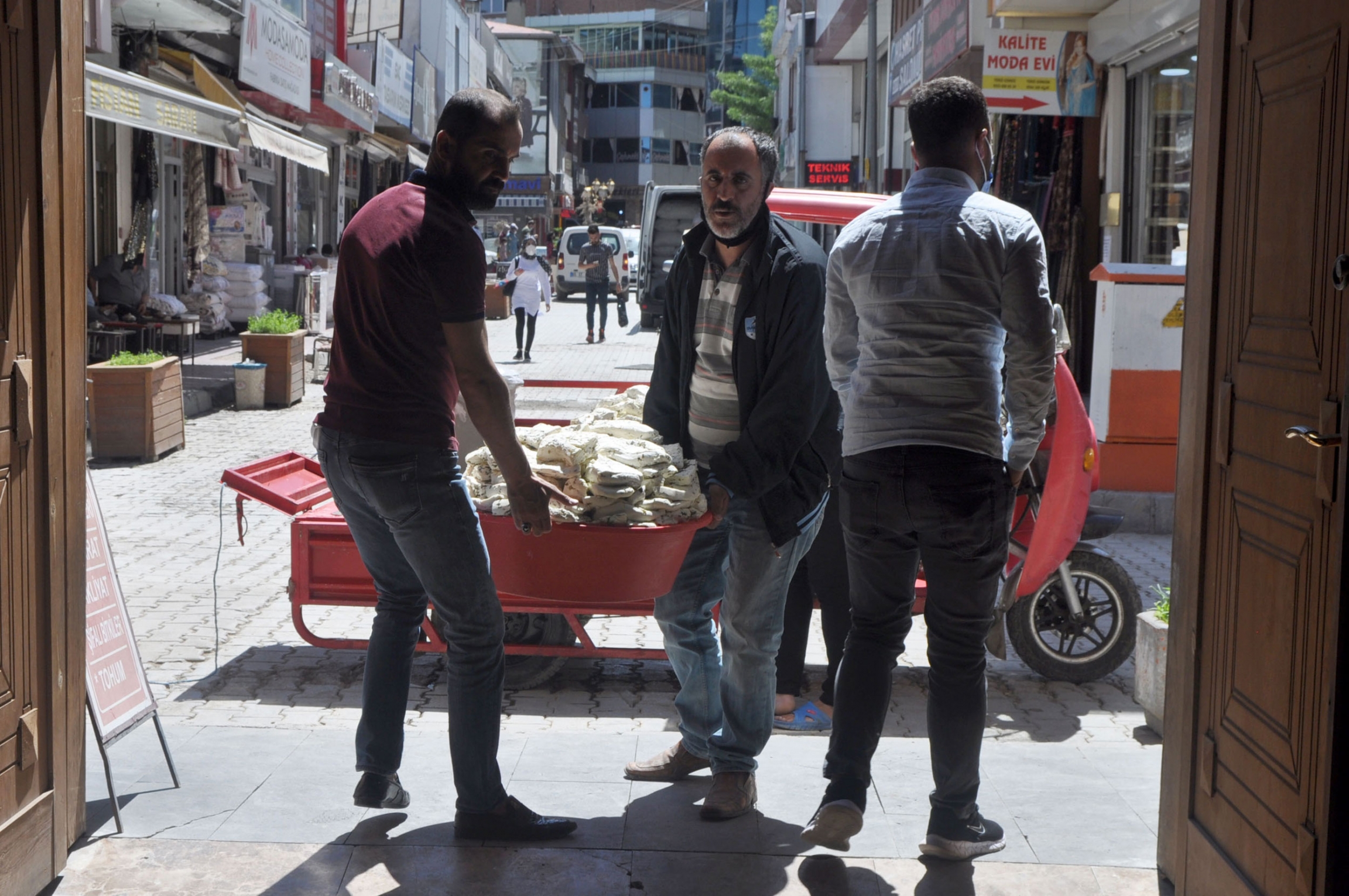 Workers bring in a shipment of regional Van cheese on a weekday morning, before the market gets busy.

He worries that the producers he relies on won’t stay in the business much longer. He claims that in 10 years, half of Van cheese made in Turkey will be produced in a factory.

But at least for the moment, there seems to be a healthy demand. One woman in a long dress and headscarf said she’s buying 75 pounds of the stuff. 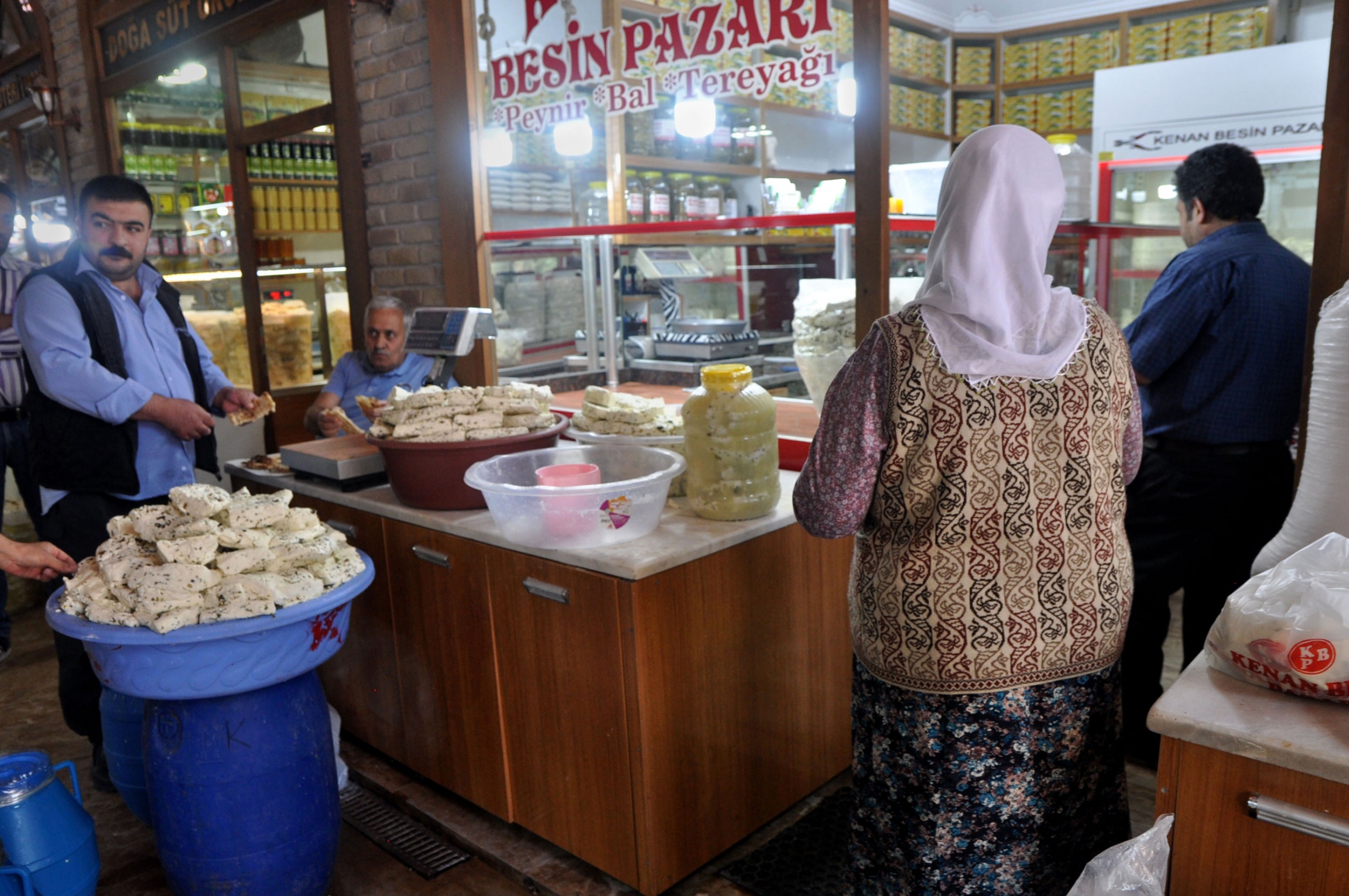 Customers outside a shop in the historic cheese market in central Van. Most shops sell Van Otlu Peyniri, a local specialty made with raw sheep’s milk and wild herbs. Others, like this one, diversify their wares with honey, butter, and tea.

“We’re tribal people, and we love guests,” she said. “People are coming and going, that’s why we buy it.”

She said she’ll freeze half for the winter to indulge its natural flavors — even while the sheep rest from producing milk.

Translations from Kurdish and Turkish provided by Angel Istek Alcu.