In a small sheep-herding village in Turkey’s eastern Kurdish region, not far from the Iranian border, Mahbu Avtar sits in an orange plastic chair and pulls down her sleeve, ready for her first dose of her COVID-19 vaccine.

“People are suffering. ... I may pass the illness easily, but I’m thinking of others. That’s why I’m taking it seriously.”

“People are suffering,” said the 55-year-old mother of four. “I may pass the illness easily, but I’m thinking of others. That’s why I’m taking it seriously.”

As the world embarks on the largest vaccine drive in history, Turkey has taken on the task of vaccinating its most isolated residents. 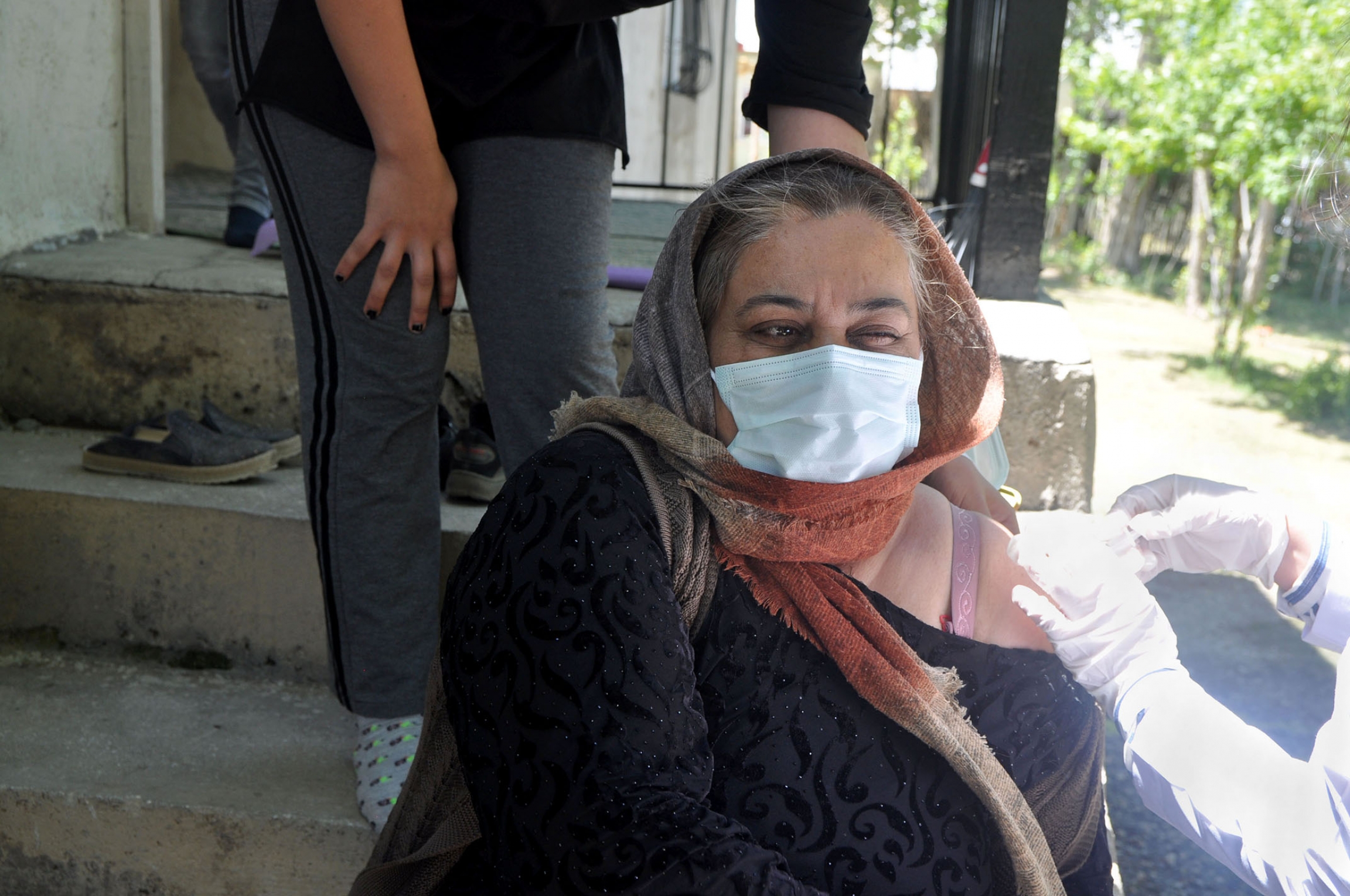 Emine Saruhan winces during a COVID-19 vaccination shot on her front porch in the town of Ömerova. The 46-year-old has a health condition, and hoped a vaccine would alleviate some of her fears.

In the rural district of Başkale, three-person teams of doctors, nurses and drivers have spent months traveling into the mountains to deliver vaccine doses to 120 villages.

The local health department estimates that at least 70% of vaccine doses in Başkale were given in the field. With five crews out at once, they can give 300 vaccines in a day.

Many communities are situated on steep, unpaved mountain roads, where a public bus might only pass nearby once a day. For much of the season, the impassable roads meant that teams had to walk, carrying coolers of vaccines and medical equipment through snow and mud.

“In a war, soldiers are on the front lines. In a pandemic, it’s the doctors."

“In a war, soldiers are on the front lines. In a pandemic, it’s the doctors,” said Emine Aslan, a doctor on the vaccine teams. 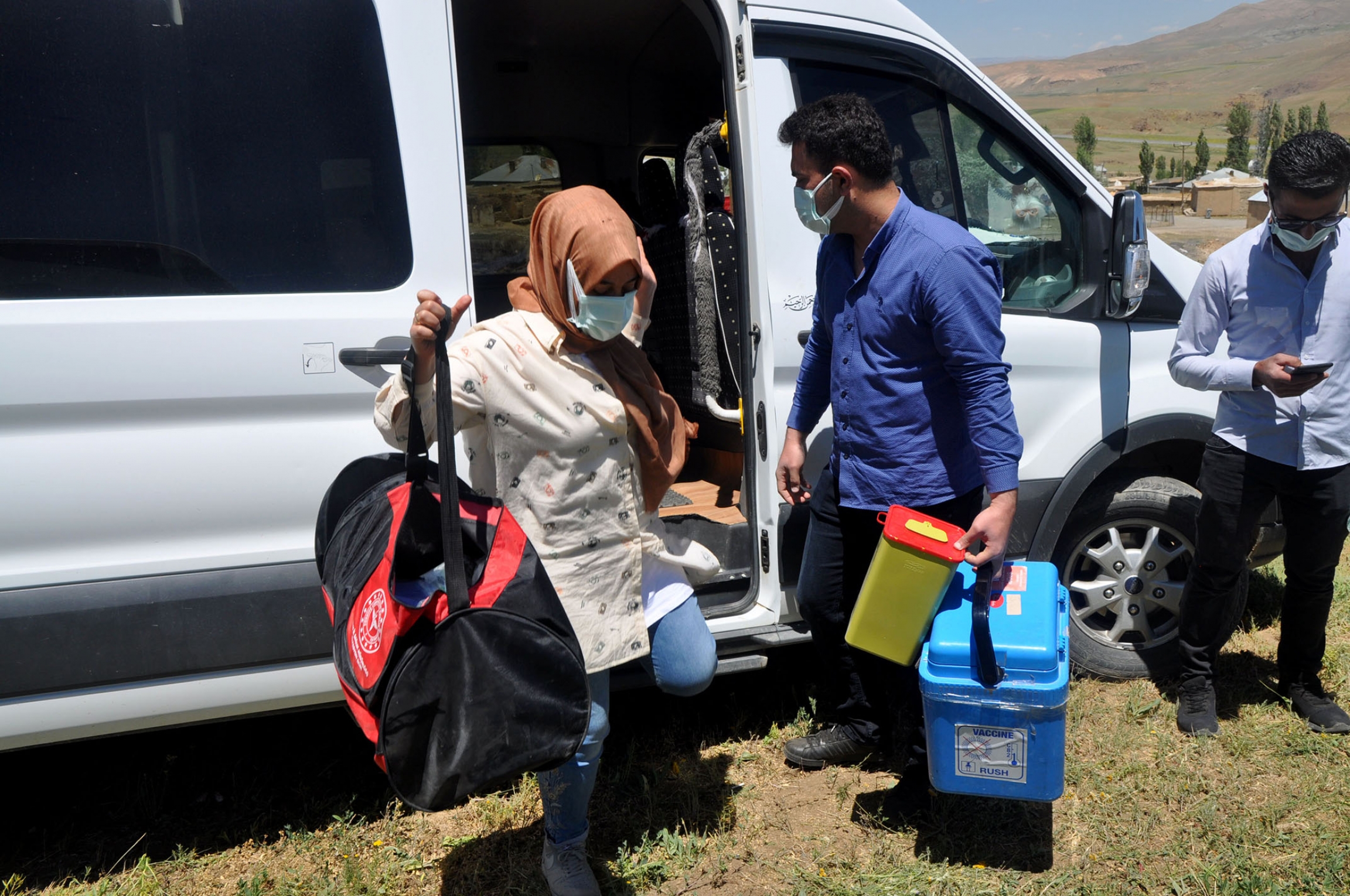 Health workers unload equipment to give out COVID vaccines in Ömerova, a village in Turkey’s eastern Kurdish region.

Turkey’s vaccination drive stalled in the spring after expected shipments of the Sinovac vaccine were delayed by China.

Today, fewer than 17% of Turkish residents are fully vaccinated against COVID-19, according to numbers from Turkey’s Ministry of Health, but new deliveries of the Pfizer-BioNTech vaccine are speeding up the process.

The Turkish government has recently expanded vaccine eligibility to registered workers and those under the age of 40 — a welcome prospect after a grim year that claimed the lives of nearly 49,000 people in Turkey.

Riding out the pandemic in Ömerova

In normal times, Başkale’s small communities are self-sufficient and tight-knit, full of hundreds of people from the same extended family.

So, unidentified COVID-19 cases could quickly turn into a local outbreak. 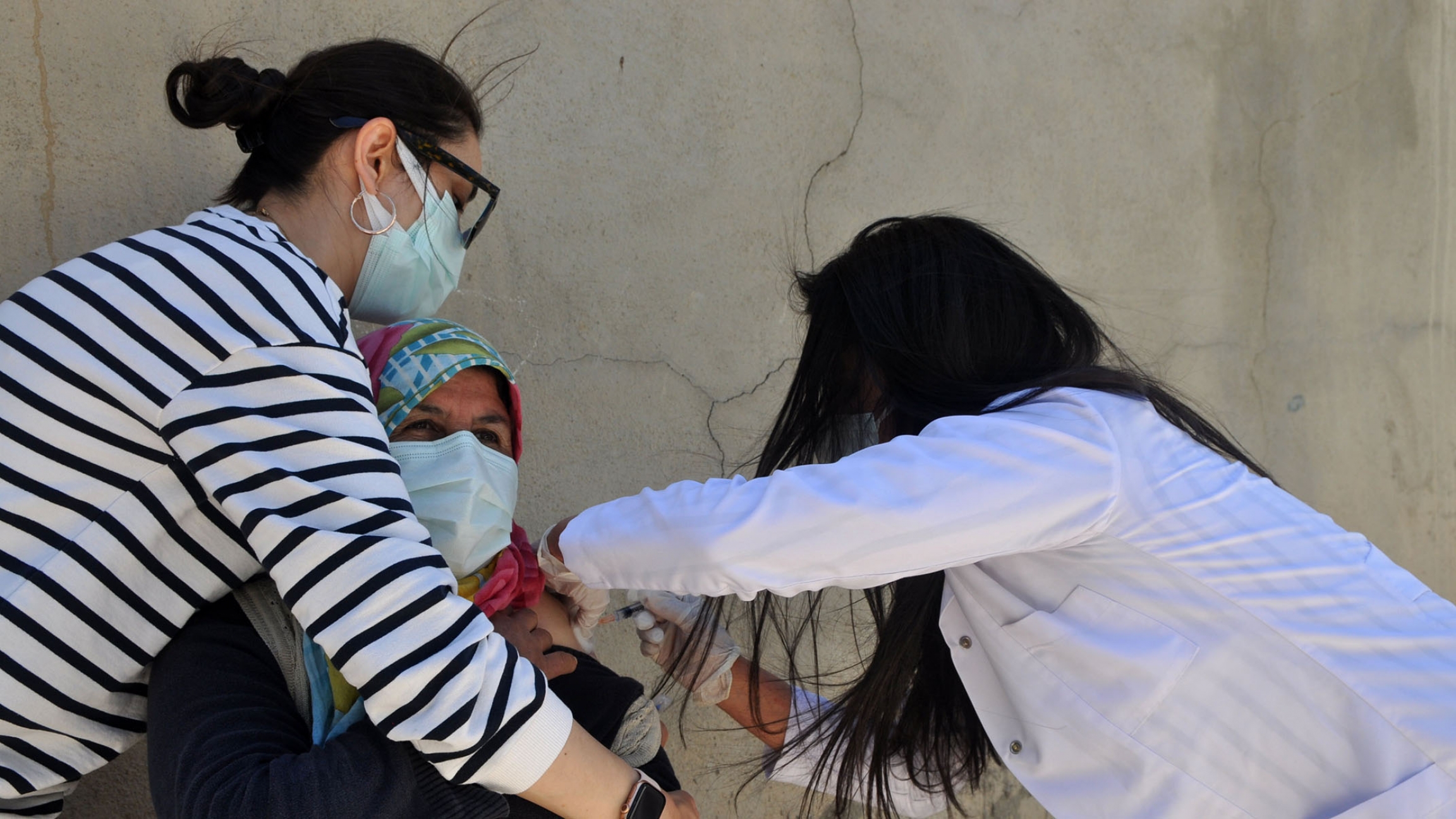 A patient receives a COVID-19 vaccine in the village of Ömerova.

“We were all at home, hoping to God this will never happen again,” Avtar said. “There were weddings, but we didn’t go.”

Avtar, who was born in Iran and later married into the village of Ömerova, in the Başkale district, said the pandemic has been long, isolating and lonely.

She hasn’t seen her relatives in more than a year, even though they live just on the other side of the border.

At one point, her husband came down with COVID-19. They isolated him in one room of the house and passed meals through the door. He recovered.

“I really want people to get vaccinated, not only for my people — but for everyone,” Avtar said.

Ömerova escaped the pandemic relatively unscathed, but others were devastated. One neighboring village was placed under quarantine at the beginning of the pandemic after dozens of people fell ill.

“There were seasonal workers in Istanbul ... when the pandemic started, the work started and they had to come back to the village."

“There were seasonal workers in Istanbul ... when the pandemic started, the work started and they had to come back to the village,” said Gürkan Pekin, a doctor. One woman stayed in intensive care for two months, he recalled.

“We were also scared, we didn’t know anything about it,” Pekin said. “But at the end, we had to do this. It’s about our conscience.”

Building trust in a year of doubt 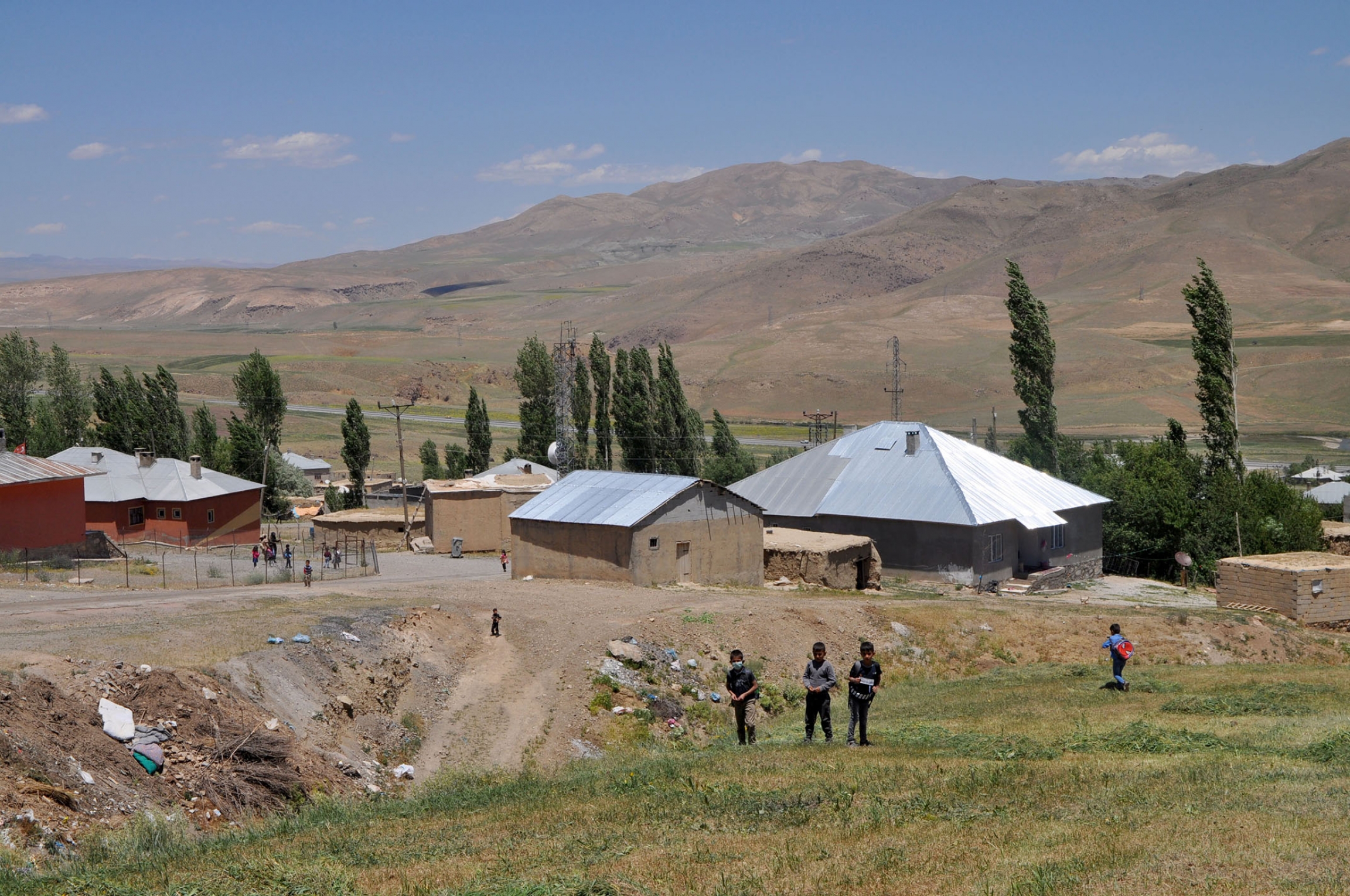 Children leave school in the village of Ömerova in Turkey.

The hills above Ömerova are covered in short grasses and purple wildflowers. Snowy peaks rise in the distance, marking the Iranian border.

The COVID-19 vaccine program is a scaled-up version of childhood vaccine drives in villages conducted by Başkale’s health department. They have always had a small contact-tracing program, usually to respond to occasional outbreaks of food-borne illnesses, due to the popularity of raw sheep’s milk. But despite this experience, the doctors say they often run into challenges coaxing people to get the shots.

“We tell people, ‘If it wasn’t useful we wouldn’t come 100 kilometers to come and give it to you, or take it ourselves.' ... Vaccines are the most important weapon against this illness.”

“We tell people, ‘If it wasn’t useful we wouldn’t come 100 kilometers to come and give it to you, or take it ourselves,’” Aslan said. “Vaccines are the most important weapon against this illness.”

Some communities, Aslan said, say they feel safe because they haven’t had a local outbreak, and they think that living in an isolated, rural area will protect them. In other villages, particularly those close to the border, she’s lucky if two residents agree to get vaccinated.

“We do our best but there are still people who say no,” Aslan said.

Aslan, who grew up in the seaside town of Mersin, never thought she would live in a town with such a difficult winter. But she was placed there after medical school, fell in love and married a local school teacher.

In some villages, she and her colleagues are seen as outsiders. Başkale is a largely Kurdish region of eastern Turkey, and it still bears scars of the Turkish government’s longtime war against the Kurdistan Workers’ Party (PKK), a militant separatist group.

Almost everyone speaks Kurdish in this region, but the government doctors speak Turkish. So, it’s the drivers who help translate and earn trust with community leaders — in addition to navigating steep mountain roads.

“We’re the children of this place. Serving here, it’s like serving yourself."

“We’re the children of this place. Serving here, it’s like serving yourself,” said Suat Saruhan, a driver for the health department who comes from Ömerova. 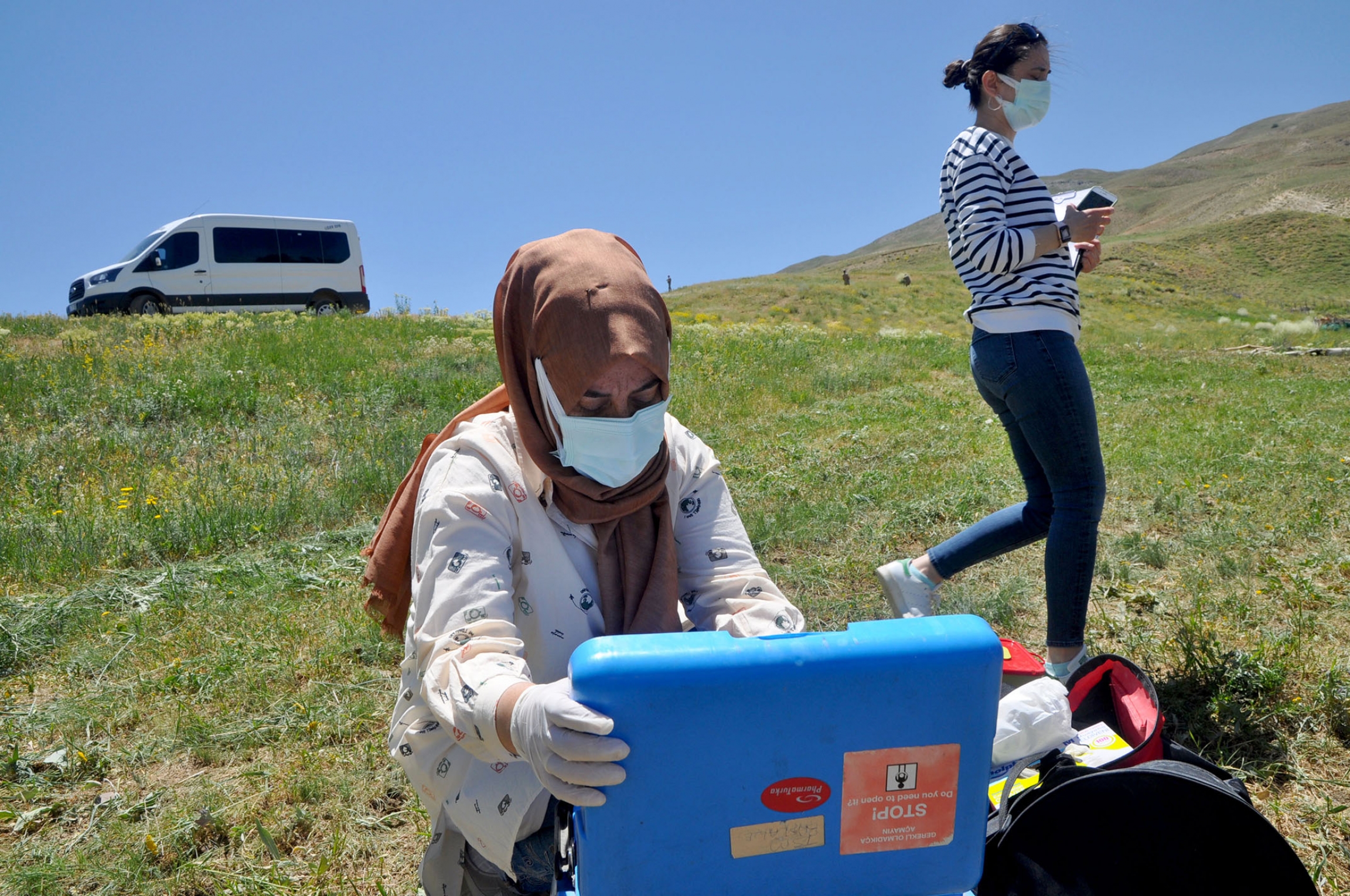 Fears of a summer spike

As the team drives back to the health department offices in Başkale, Aslan gets a call on her cell phone. Five more positive COVID-19 cases have been identified in the villages. She and a colleague will have to make a contact-tracing visit with patients about their meetings and whereabouts over the last few days.

“Actually, we’re expecting the cases to increase, because people will come together and come in contact during weddings and ceremonies,” Aslan said.

“This summer is going to be hard.”

It’s a grim reminder that for much of the world, this pandemic is far from over.

Translations from Turkish and Kurdish by Angel Boran.