In the Calipso neighborhood of Cali, Colombia, the main road has been blocked with stones, bricks and bright orange barriers. As a police helicopter flies over the roadblock, young men with faces covered redirect traffic and keep an eye on who enters the neighborhood.

Dozens of these roadblocks have been set up across Colombia to pressure the government into meeting protesters’ demands, and in some cases, to keep the police away. 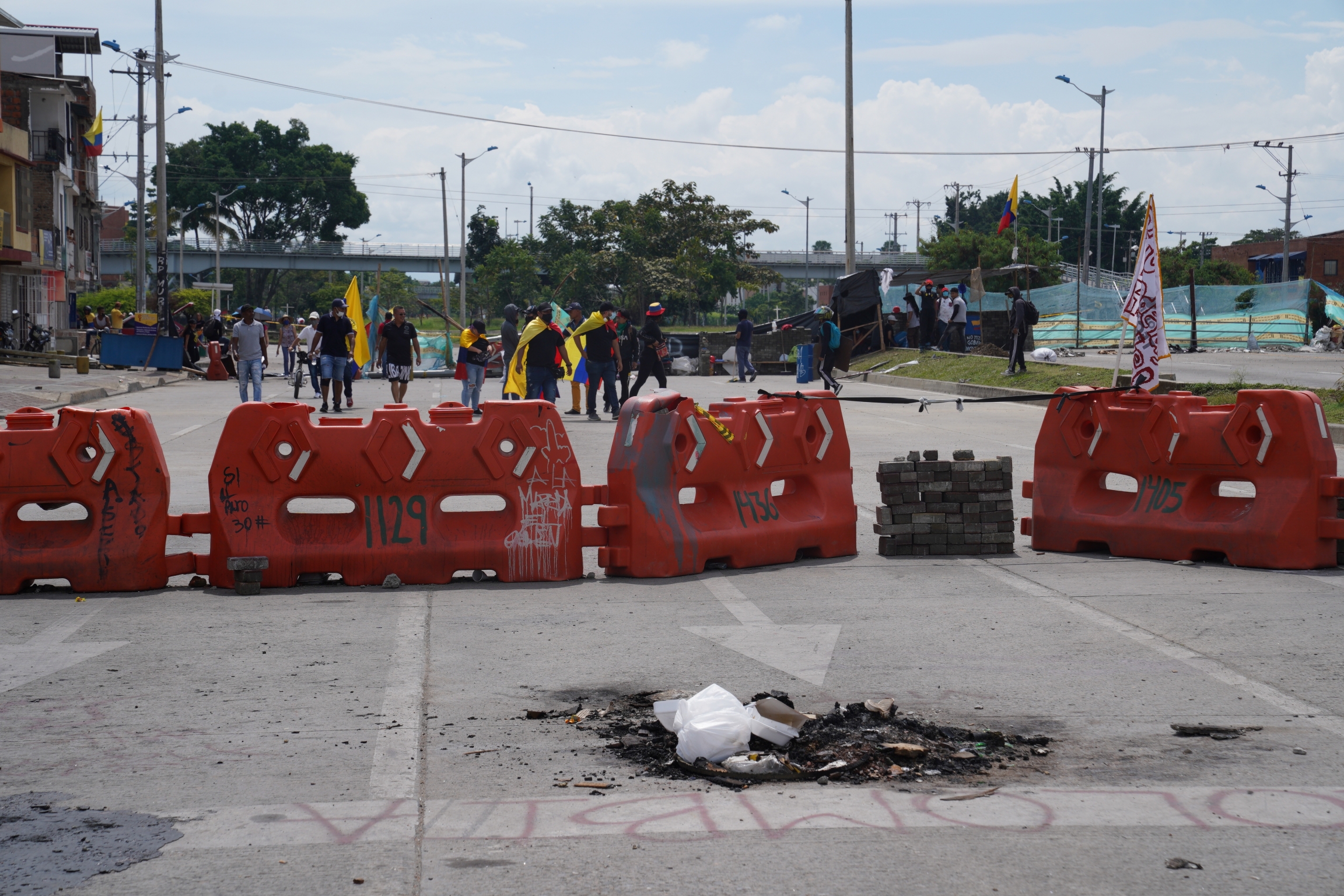 The main road leading into Cali’s Calipso neighborhood has been blocked by protesters. It's a way to put more pressure on the government but the roadblocks also help to keep police away.

“We are being killed."

“We are being killed,” said one protester wearing a black ski mask, who didn’t want to reveal his name due to security concerns. He held some bullet cases in his hand and said they came from guns fired by the police. 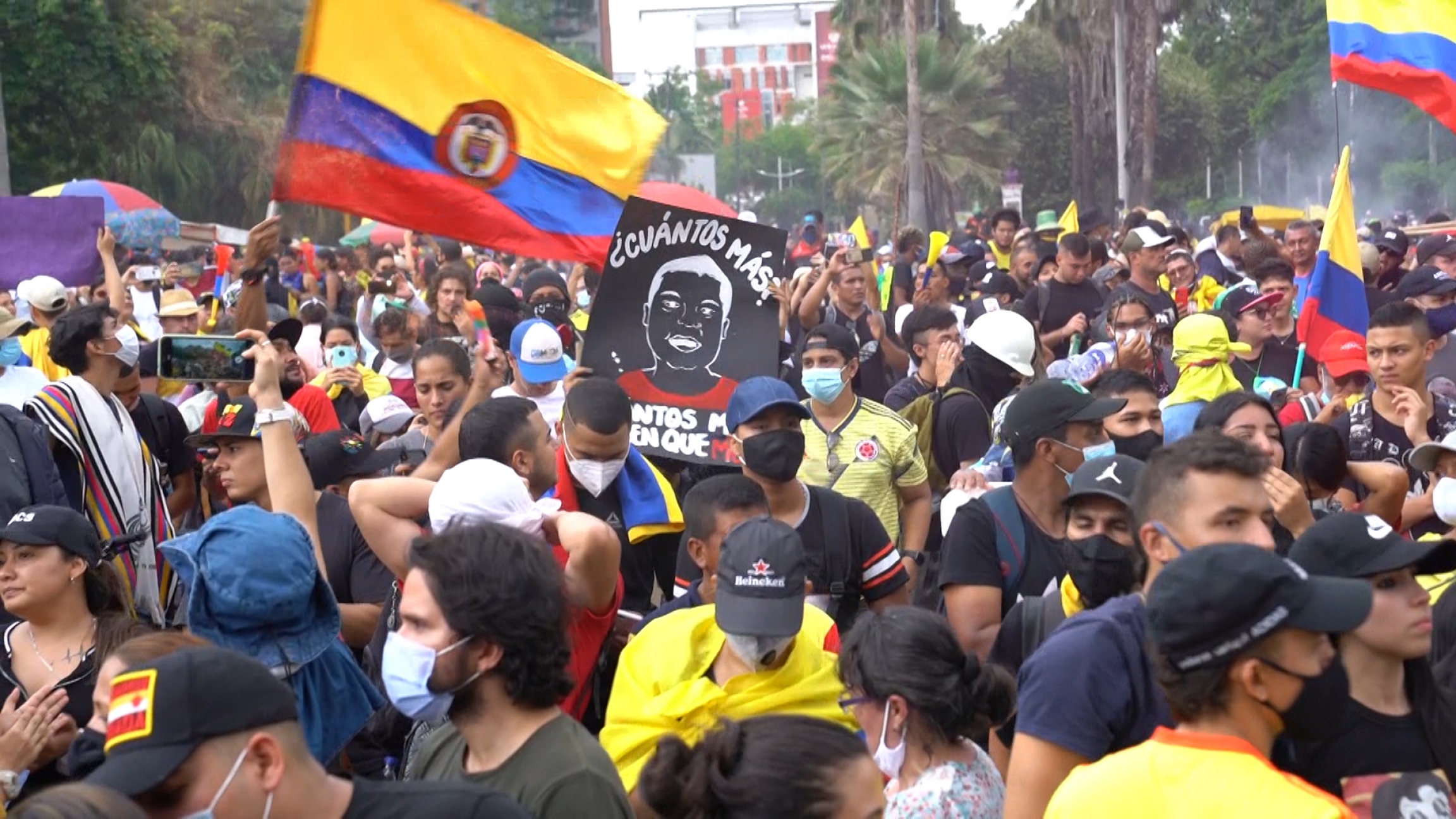 A sign reading “how many more” is displayed during a protest in Cali, Colombia on May 28. Calls for police reform have increased after dozens have been killed in the current wave of protests.

Police violence has been a longstanding problem in Colombia where, according to one human rights group, more than 80 people were killed by officers in 2020.

In a fresh wave of protests that began  onApril 28, after the government proposed raising taxes, many demonstrators say police shot, beat, and hurt them with tear gas canisters.

At least 42 people have been killed amid clashes with police during the protests, according to Colombia’s human rights ombudsman.

And now, protesters say their main demands focus on police reform and justice for victims.

“Until there is ... truth, there can’t be real peace,” said Ana Maria Velasquez, an artist who showed up at a recent march in Cali, wearing black to mourn recent victims of police violence.

In one incident recorded with a cell phone, a policeman fired his gun at a young man who had kicked him at a protest and was trying to run away. The man fell to the ground and died.

Another video showed how police used a missile launcher placed on top of an armored vehicle to fire multiple rounds of tear gas at an angry crowd, putting lives at risk.

Even protesters at peaceful events say they’ve been attacked.

Juan Camilo Suarez was shot with a rubber bullet in his right eye as he attended a vigil for protest victims that police eventually disrupted. Doctors have told Suarez that he will lose most of his sight in that eye.

“It hurts to not be able to demand our rights peacefully. ... There were children and senior citizens there.” 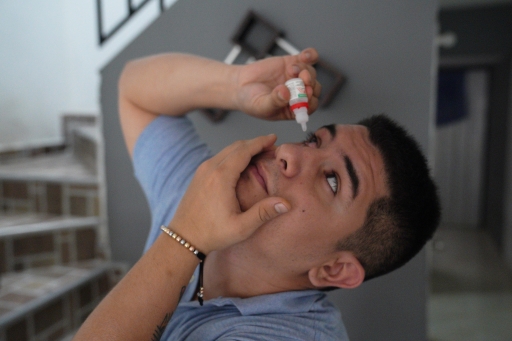 Camilo Suarez places droplets in his right eye to reduce inflammation. Suarez was hit with a rubber bullet during a vigil on May 2, and lost most of his sight in that eye.

“It hurts to not be able to demand our rights peacefully,” said the 22-year-old student. “There were children and senior citizens there.”

The Colombian government says the protests have been hard to handle because they've sometimes turned into riots in which police officers also face gunfire or attacks with rocks and homemade bombs.

In a recent debate in Congress, Defense Minister Diego Molano said that members of rebel groups have infiltrated protests in cities like Cali, where bus stations have been set on fire. In nearby Tulua, the local courthouse was incinerated last week by unidentified men wearing hoods.

“What we have seen is not just vandalism, “ Molano said. “It’s a premeditated attack on the city and the government.”

But many experts say that one reason these protests have been so violent is that police officers in Colombia are not properly trained to handle large civilian crowds — especially when they turn hostile.

That’s because for decades, Colombian police have been deployed to fight rebel groups and heavily armed drug-trafficking gangs.

“Many of the officers who are in charge of patrolling and protecting these protests are actually trained to conduct war."

“Many of the officers who are in charge of patrolling and protecting these protests are actually trained to conduct war,” said Juan Pappier, a senior researcher at Human Rights Watch.

“And that is very dangerous. Because, while soldiers are trained to kill enemies in war, police officers should be trained to deescalate and use as little force as necessary.”

Human Rights watch says it has documented nine cases in which police have killed demonstrators with gunfire in recent protests; and another four cases where police have killed protesters with tear gas canisters and other devices that are designed to disperse crowds. 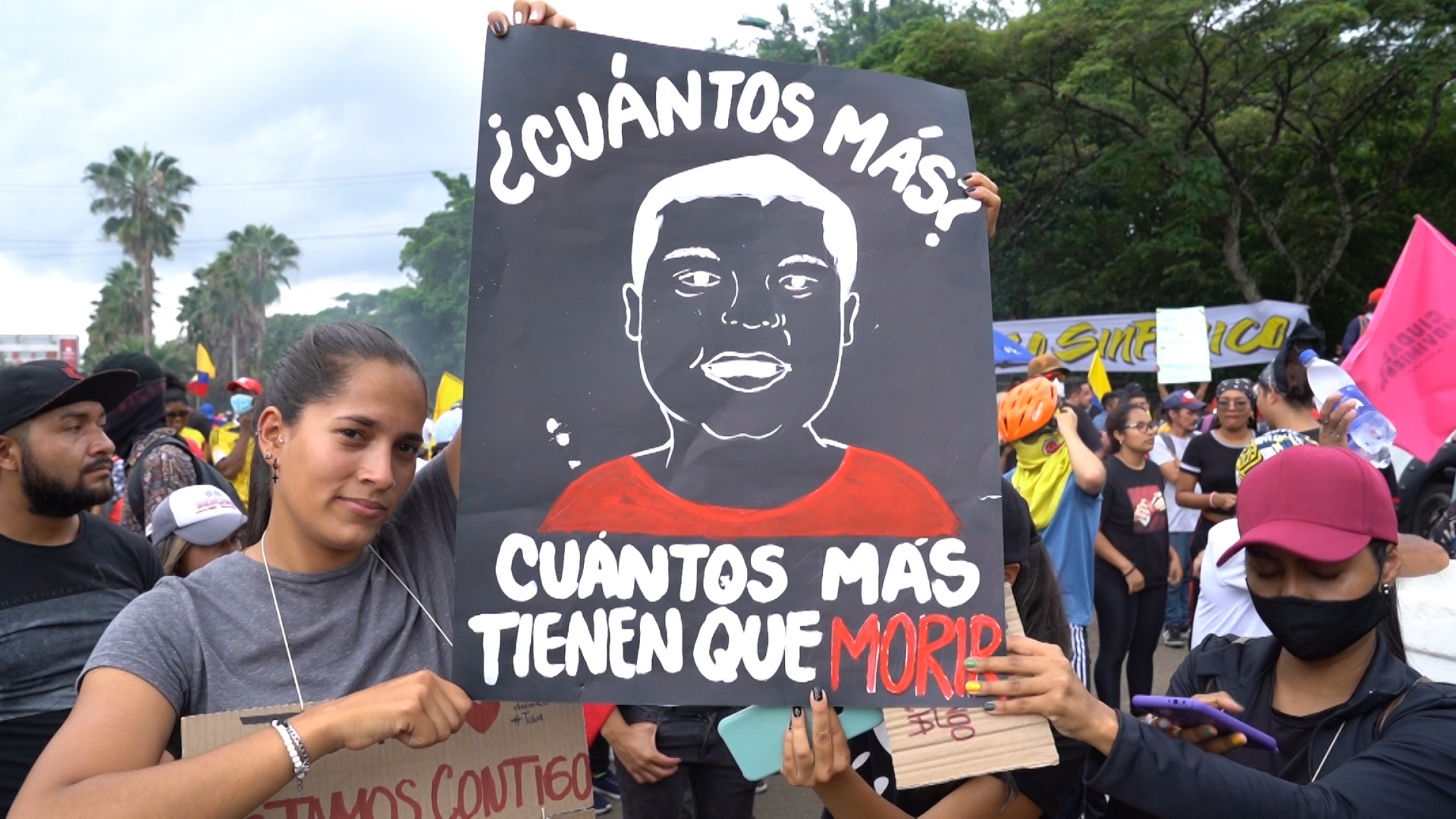 A poster that says, "how many more must die?" is displayed during a protest in Cali on May 28.

Because of incidents like these, the protesters say they want the mobile anti-riot squad, that has been responsible for many abuses, dissolved.

They also want police to be held accountable in civilian courts. Currently, police officers who commit crimes in Colombia are judged by military tribunals.

Colombia’s government has not agreed to these demands. But President Ivan Duque proposes putting body cameras on officers, and changing their uniforms to make those who commit crimes easier to identify.

“The police have to realize that they also make mistakes. ... We need to have more accountability and empathy.”

For Camilo Suarez, who lost sight in his right eye, that’s just not enough. “The police have to realize that they also make mistakes,” he said. “We need to have more accountability and empathy.”