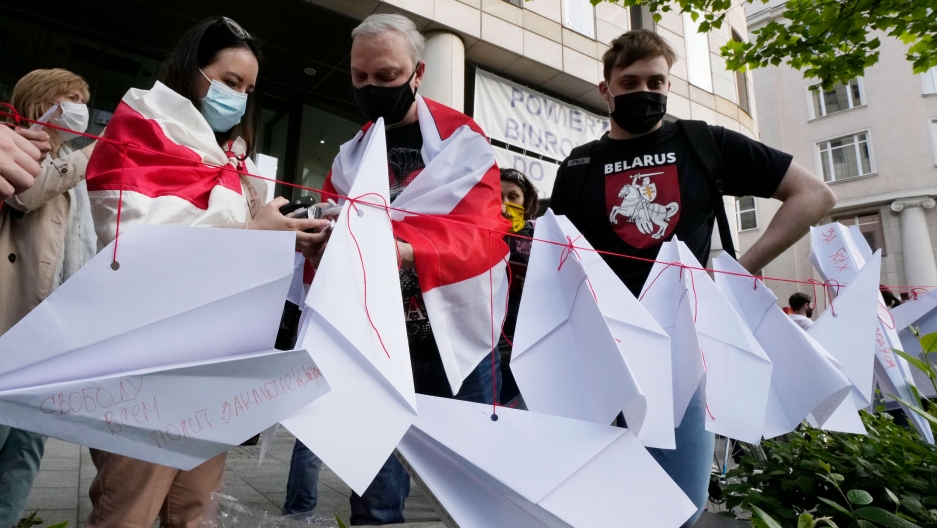 Protesters attach paper planes during a demonstration of Belarusians living in Poland and Poles supporting them in front of European Commission office in Warsaw demanding freedom for Belarus opposition activist Raman Protasevich in Warsaw, Poland, May 24, 2021.

Belarus
The European Union has agreed to impose sanctions on Belarus, in response to President Alexander Lukashenko’s forced diversion of a commercial flight to detain activist and opposition journalist Roman Protasevich. It has also banned Belarus’ airlines from using EU airspace and airports, and urged European airlines to avoid Belarusian airspace. On Monday, Protasevich appeared in a video, in what his father described as under duress, confessing to charges of organizing protests. The Ryanair flight was on its way to Lithuania from Greece on Sunday, but was redirected by a military jet to Belarus’ capital, Minsk.

Blinken in the Middle East
US Secretary of State Antony Blinken is in the Middle East following a deadly 11-day war between Israel and Hamas and vowed to aid Gaza. The fighting, which killed more than 250 people, mostly Palestinians, caused widespread destruction in the Gaza Strip. “We have to use the space created to address a larger set of underlying issues and challenges. And that begins with tackling the grave humanitarian situation in Gaza and starting to rebuild,” he said.

George Floyd anniversary
Tuesday marks one year since the death of George Floyd, a Black man who was killed by a white police officer in Minneapolis, Minnesota. Floyd’s death sparked a global movement against police brutality that led to demonstrations in cities around the world. Then-officer Derek Chauvin had pinned down Floyd’s neck with his knee for more than nine minutes. Chauvin was convicted of murder in April and faces sentencing on June 25. The intersection where Floyd was killed has been turned into an outdoor festival to mark the anniversary. “We're going to be turning mourning into dancing,” rapper Nur-D tweeted. “We're going to be celebrating 365 days of strength in the face of injustice.” 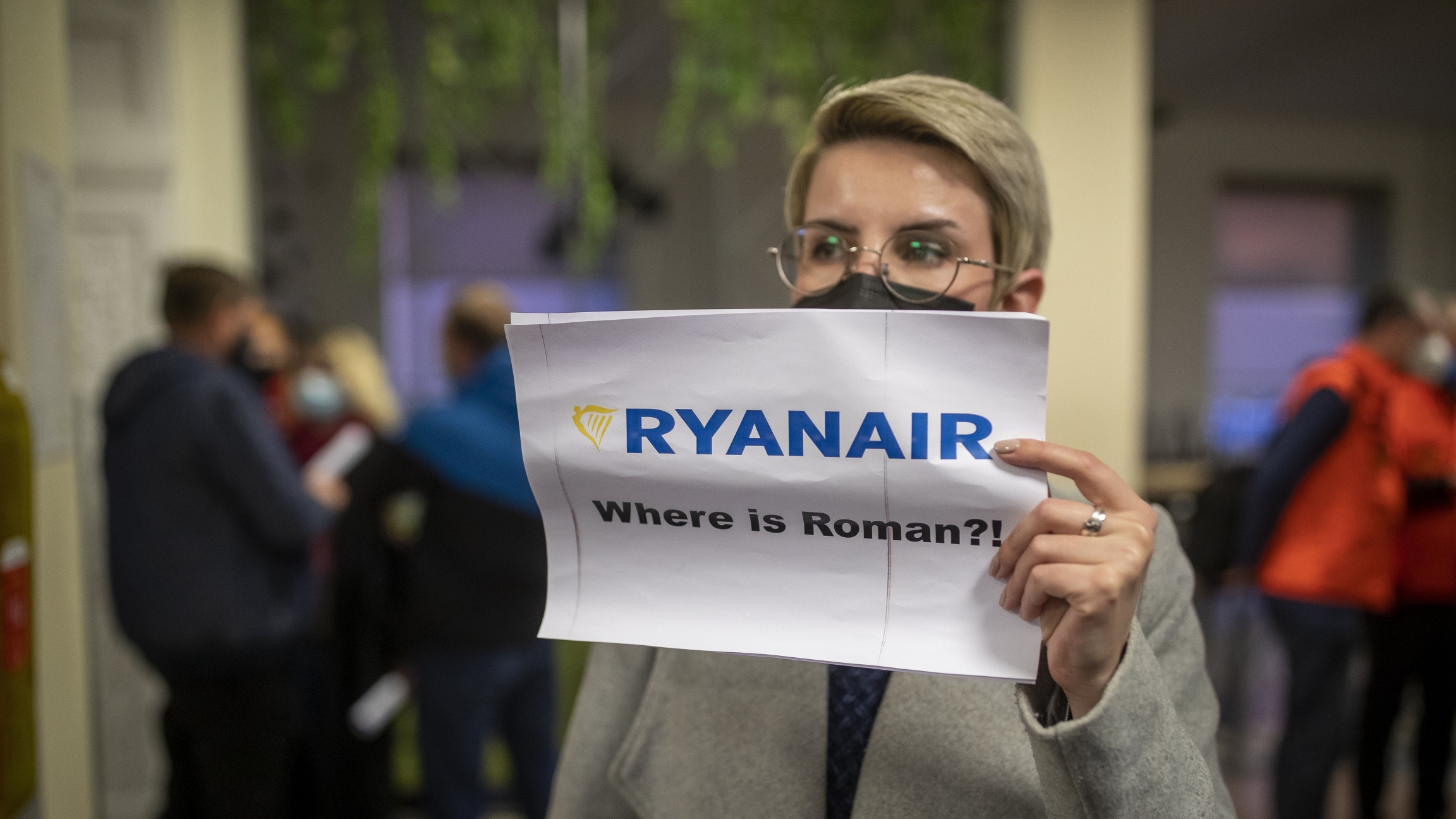 A woman holds a poster reads, "Where is Roman?" as she waits to see passengers of the Ryanair plane with registration number SP-RSM, carrying opposition figure Roman Protasevich, which was traveling from Athens to Vilnius and was diverted to Minsk after a bomb threat, after its landing at the International Airport outside Vilnius, Lithuania, Sunday, May 23, 2021.

Katia Glod, a Belarus analyst with Center for European Policy Analysis, told The World's Carol Hills that the arrest of Belarusian dissident Roman Protasevich doesn't change much for Belarusians inside the country, but it puts the government of President Alexander Lukashenko onto a new level of priority, and creates a moral dilemma for the European Union.

"[Sunday's] incident has shown that now Lukashenko's regime became a real threat to international norms, and real threats to European security," she said.

As demand grows to cancel Tokyo Olympics, who has the power to call it off? 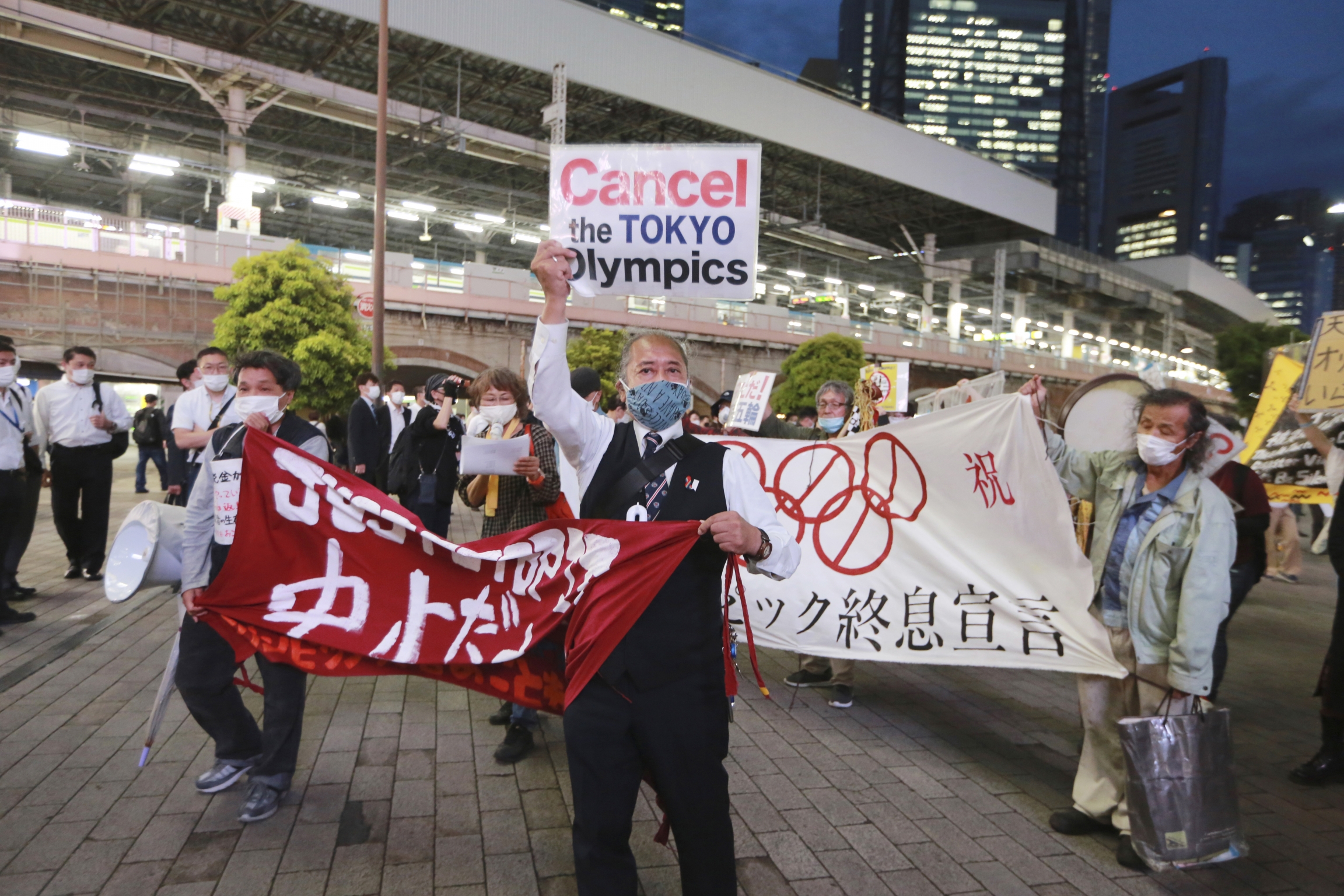 In this May 17, 2021, demonstrators protest against the Tokyo 2020 Olympics in Tokyo. The IOC and Tokyo Olympic organizers run into some of the strongest medical-community opposition so far with the games set to open in just over eight weeks.

According to the latest polls, 83% of people in Japan think the Games should be postponed or scrapped entirely. But there’s been a lack of clarity on who gets to make that decision.

In the latest jaw-dropping auction for a nonfungible token (NFT), the famous meme from the YouTube video where a young British boy cries out, "Charlie bit my finger," will now be taken down forever from the video platform after selling for $760,999. Watch the original video here while you still can.

The piece of internet history has more than 880 million views https://t.co/ShVYqYtJnt 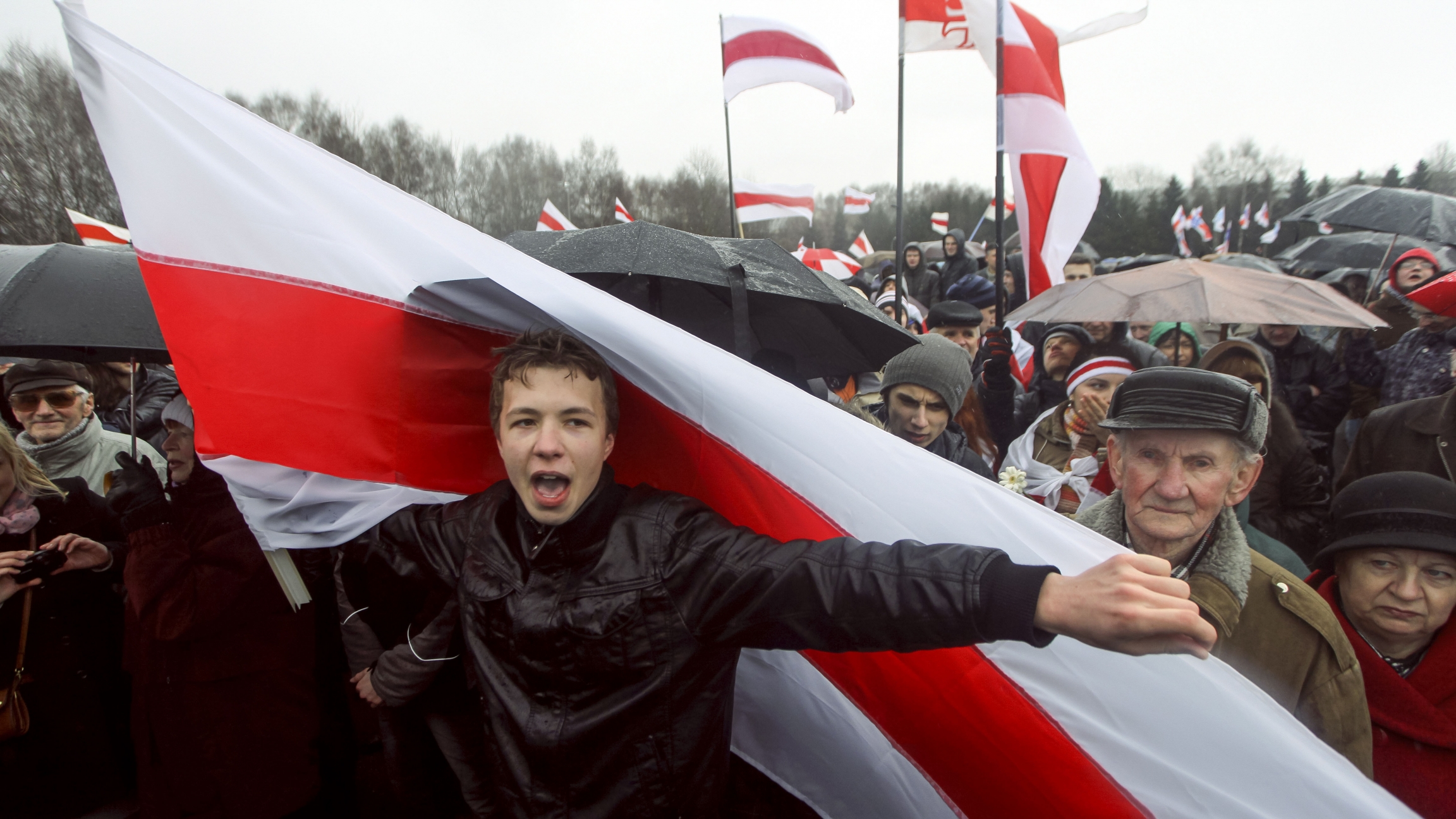 On Sunday, Belarusian authorities diverted a passenger flight carrying Roman Protasevich, a prominent dissident. He was then detained under the orders of Alexander Lukashenko, known as “Europe’s last dictator.” And, US Secretary of State Antony Blinken will arrive in the Middle East tomorrow, following the start of Friday’s ceasefire between Israel and Hamas. Also, 21 marathon runners have died in China after extreme weather struck an ultramarathon in a northwestern province. And, the Pacific Island nation of Samoa was set to swear in its first-ever female prime minister earlier today, but it didn't go as planned.