In a historic move last month, Germany agreed to return priceless artifacts to Nigeria that were stolen during the colonization of Africa in the 19th century.

Germany has the second-largest collection of Benin Bronzes in the world and will start repatriating the pieces starting in 2022. The bronzes will be housed in a new museum in Benin City, Nigeria.

“We are facing the historical and moral responsibility to bring Germany’s colonial past to light and to come to terms with it. Dealing with the Benin Bronzes is a touchstone.”

“We are facing the historical and moral responsibility to bring Germany’s colonial past to light and to come to terms with it,” Germany’s culture minister Monika Grütters said in a statement. “Dealing with the Benin Bronzes is a touchstone.”

Related: 'Our goal is to heal': Jesuits and descendants of the enslaved reflect on landmark agreement

The Benin Bronzes — regarded as one of Africa’s greatest artistic treasures — are a group of more than a thousand brass sculptures and plaques from at least the 16th century onward in the ancient, West African Kingdom of Benin, in present-day Nigeria. The bronzes once decorated the royal palace and recalled Benin’s great history, wealth and military might. 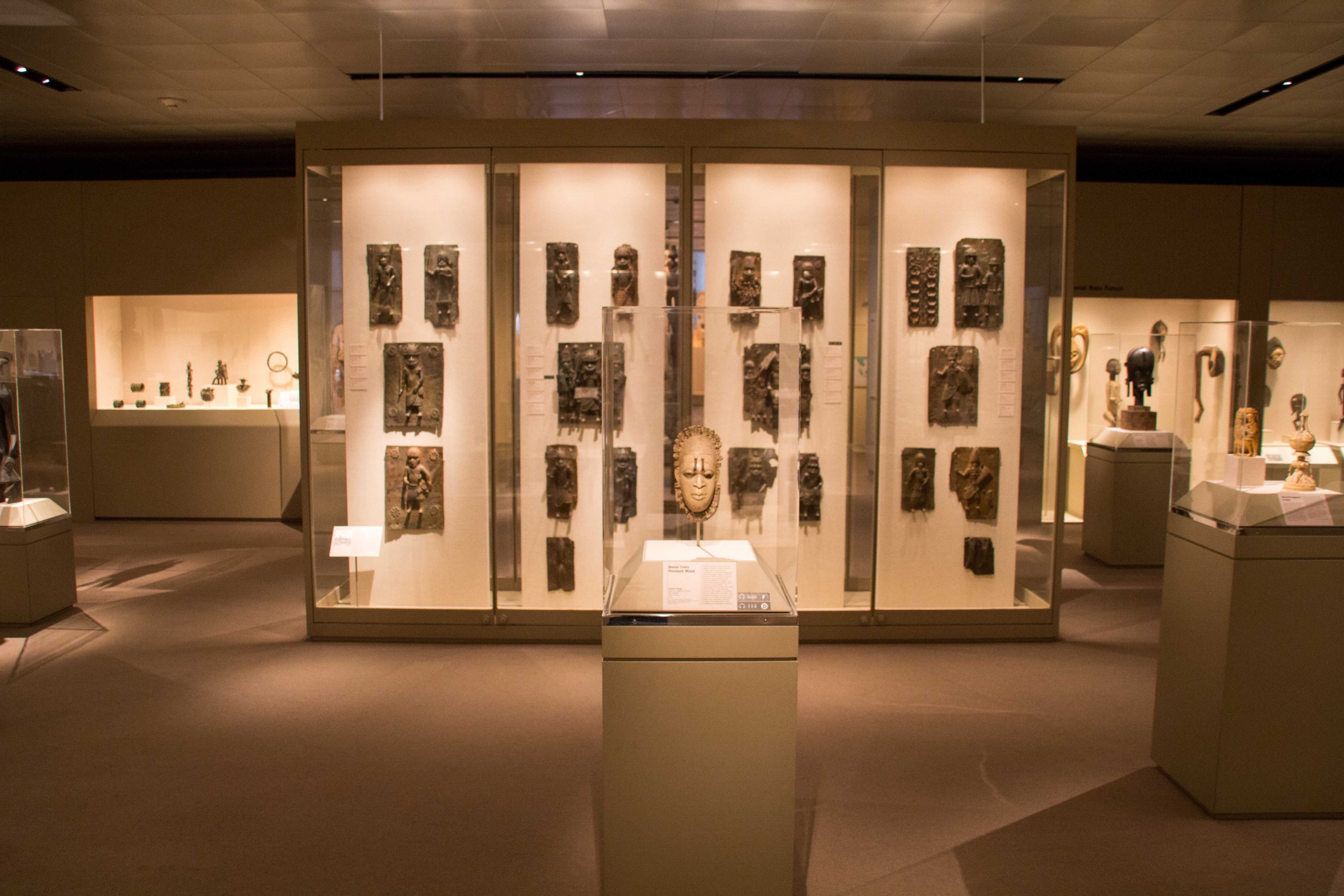 Benin bronzes at the Metropolitan Museum of Art in New York City. Photo was taken in 2017.

In 1897, British colonial forces attacked the Kingdom of Benin, burning down villages and towns and massacring residents. The colonial army also ransacked the royal palace, taking ivory, wooden carvings, masks, plaques and reliefs. The British shipped the loot back to London and sold it off. Today, the objects are on display in some of the most famous museums in Europe and the United States.

For many inside and outside of Africa, the Benin Bronzes are symbols of colonialism and exploitation, and they’ll stay that way until they’re returned.

“Since the early 1960s, the Nigerian government and authorities have been pressing for the restitution of [the] Benin Bronzes,” said Princeton University professor Chika Okeke-Agulu, who has been part of the restitution effort. “And all through the ’70s, ’80s, ’90s, these claims have not abated.”

Museums have given a range of excuses over the years for why they couldn’t possibly give back the bronzes. In the ’70s and ’80s, museum officials argued African museums didn’t have the resources to care for the artifacts. And more recently, some institutions argued there was no legal framework for returning them.

Barbara Plakensteiner, a founding member of the Benin Dialogue Group — a consortium of European and Nigerian museums that’s been working toward restitution for a decade, said the negotiations have been complicated. In Germany, the decision to return artifacts isn’t actually up to the museums. It’s up to the government.

“Basically, all of the collections are publicly owned by various federal, states or municipalities. If items from public collections are deaccessioned or returned, it is a major political process,” Plakensteiner said.

But at a certain point, she said, there has been a consensus in Germany that the moral considerations outweigh the logistical ones.

“There is a political understanding in Germany that this needs to happen. And I think 10 years ago, that was not the case.”

“There is a political understanding in Germany that this needs to happen. And I think 10 years ago, that was not the case,” Plakensteiner said.

Over those 10 years, Okeke-Agulu said, there’s been a changing of the guard — old-school museum curators and politicians have retired, and a new generation has taken their place.

“These days, museum administrators are beginning to wonder, ‘Why do we have all of these things, especially if there's all this information about how violently they were expropriated from these places,’” Okeke-Agulu said.

Related: How ‘the father of American Egyptology’ underestimated what some call the real-life Wakanda

After Germany’s big announcement, all eyes are on the British Museum, which holds the world’s largest collection of Benin Bronzes. While the British Museum hasn't committed to returning the bronzes publicly, Okeke-Agulu said they might be well on their way. The British Museum is part of the Benin Dialogue Group and has been raising funds for the new museum in Benin City.

“They are in. I don't see how they're going to back out,” Okeke-Agulu said.

World-class museums in the United States like The Metropolitan Museum of Art in New York and the Smithsonian Institution in Washington, DC, have Benin Bronzes in their collections.

Okeke-Agulu said American museums are trying to morally distance themselves, with various claims.

“We're not an African empire. It is the problem of the Europeans, they need to sort it out. These are arguments that American museums have made for the longest time,” Okeke-Agulu said.

But, with protests over racial justice across the world, that time might be up.