From a small, wooden shack at the top of the dunes, a few men keep watch over the half-moon bay of Pantano do Sul on the southern tip of the island of Florianópolis.

For this fishing community, it’s the most exciting time of the year: the return of the tainha or mullet.

It’s a big operation recently overshadowed by the COVID-19 pandemic. Since last year, the virus has hit hard the small-scale fishers who work up and down the Brazilian coast.

“The entire community eats. ... The whole community comes down to the beach to help pull in the net and everyone gets fish. It’s all of Pantano do Sul who eat the tainha from the communal catch." 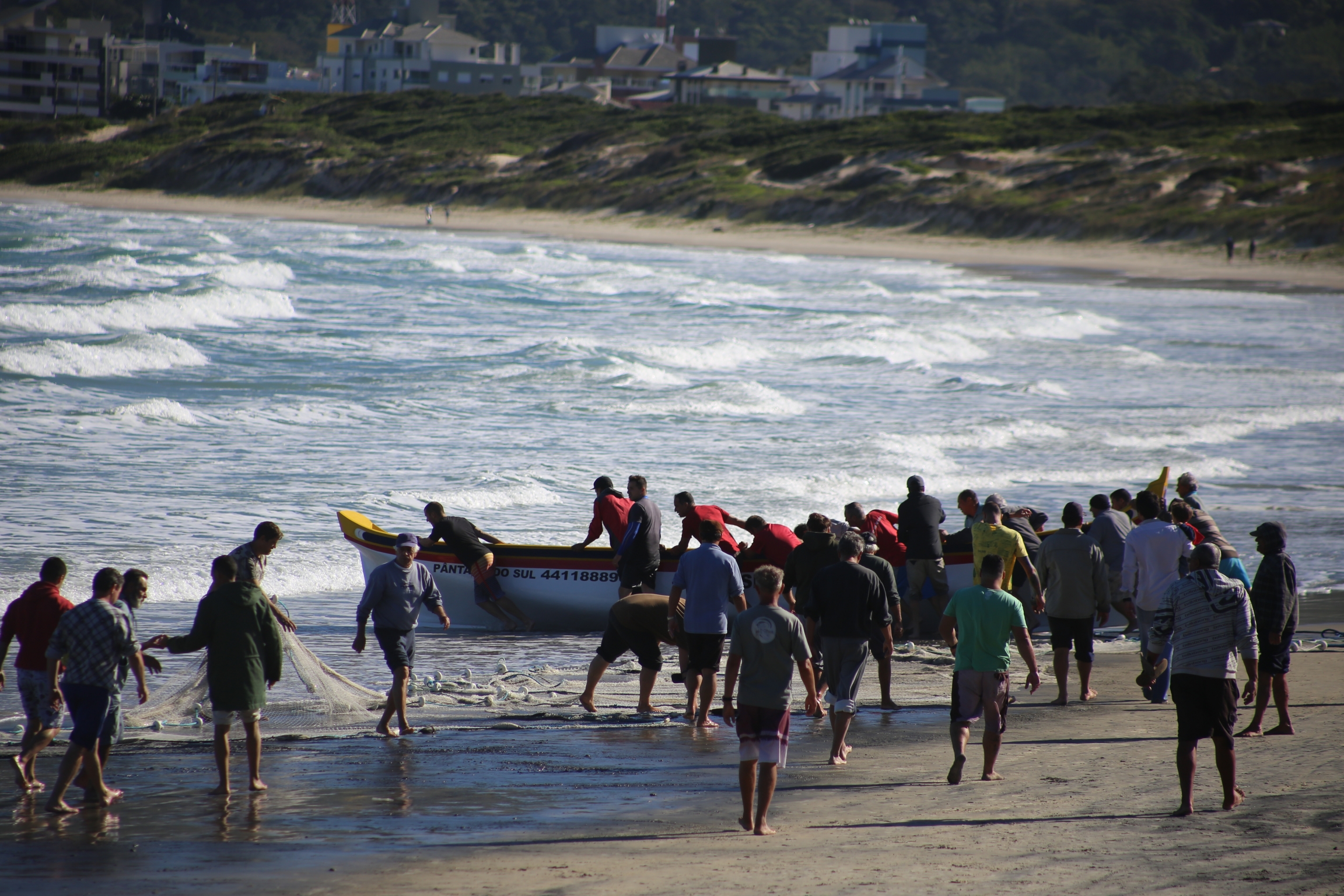 Fisherfolk meet at the sea to catch tainha in Pantano do Sul, Brazil.

“The entire community eats,” said Amarildo Monteiro, a local fisherman who helps run Arantes, a family bar and restaurant right on the beach. “The whole community comes down to the beach to help pull in the net, and everyone gets fish. It’s all of Pantano do Sul who eat the tainha from the communal catch.”

The large fish spawn in brackish, inland waters hundreds of miles south. They travel in huge schools that get close enough to the coast to be hauled to shore with massive nets.

The fishers watch the ocean and wait for their arrival. When it’s time, they send out WhatsApp messages, and the entire fishing village of Pantano do Sul soon pours onto the beach.

Residents line the coast and heave on a giant net dropped by boats rowing parallel to the shore. Dozens of men stand knee-deep in chilly water, slowly dragging in the net with hundreds of tainha.

Related: Black communities in Brazil have been hit especially hard by COVID-19 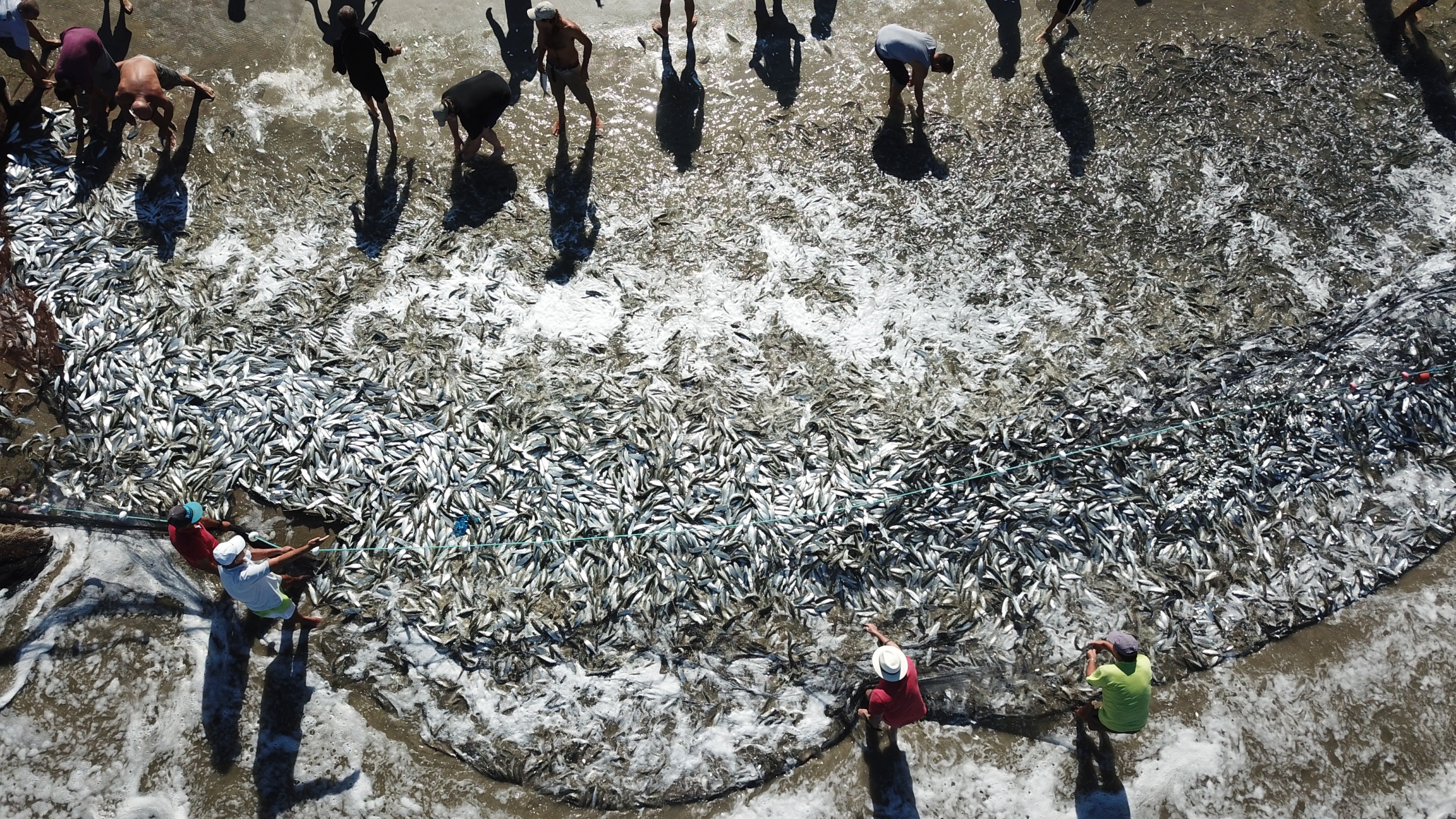 A drone shot of hundreds of tainha at the sea.

The fish often exceed a foot long and weigh 10 pounds or more. As they flop on the sand, fishers and villagers pick them up, two at a time, and carry them up the beach to be divided among the group. One catch can sometimes round up thousands of fish.

It’s a tradition that’s been carried on for generations.

“From the time of our grandparents, our ancestors,” Monteiro said. “We use a boat with just one oar. And we are surviving despite the big, motorized fishing boats. We are surviving.”

Local COVID-19 regulations say the fishers should be wearing masks and socially distancing. Monteiro said they follow all of the required safety protocols. But it’s not always that easy.

In a video of a communal catch last week on Gravatá beach, several miles north, roughly two dozen people haul in the net at close proximity. No one is wearing a mask.

That’s a concern just as Brazil seems to be getting the pandemic under control. The country has an average of 63,286 cases of the coronavirus a day. While death rates have dropped in recent weeks, they began to spike again over the past weekend.

“Days in boats fishing or crowding on coastal beaches to help haul in fish is worrisome. ... We know that a good number of these fishermen are younger people who have not been vaccinated..." 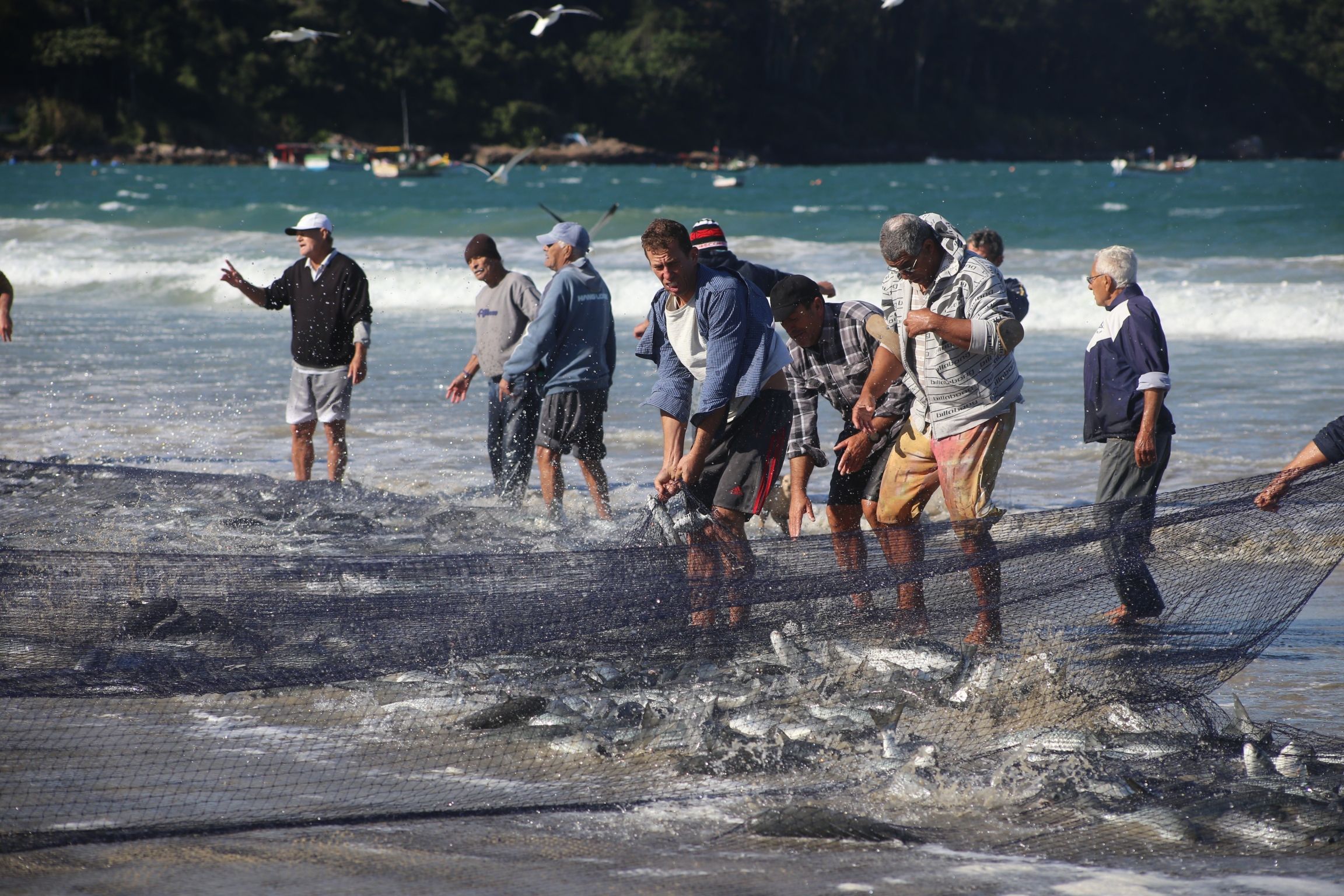 Fisherfolk pull in the net from the sea in Pantano do Sul, Brazil.

“Days in boats fishing or crowding on coastal beaches to help haul in fish is worrisome,” said Federal University of Santa Catarina infectologist, Gustavo Pinto. “We know that a good number of these fishermen are younger people who have not been vaccinated. It’s not likely that they are following more rigid protocols, and the possibility of outbreaks in these boats and communities increases a lot.” 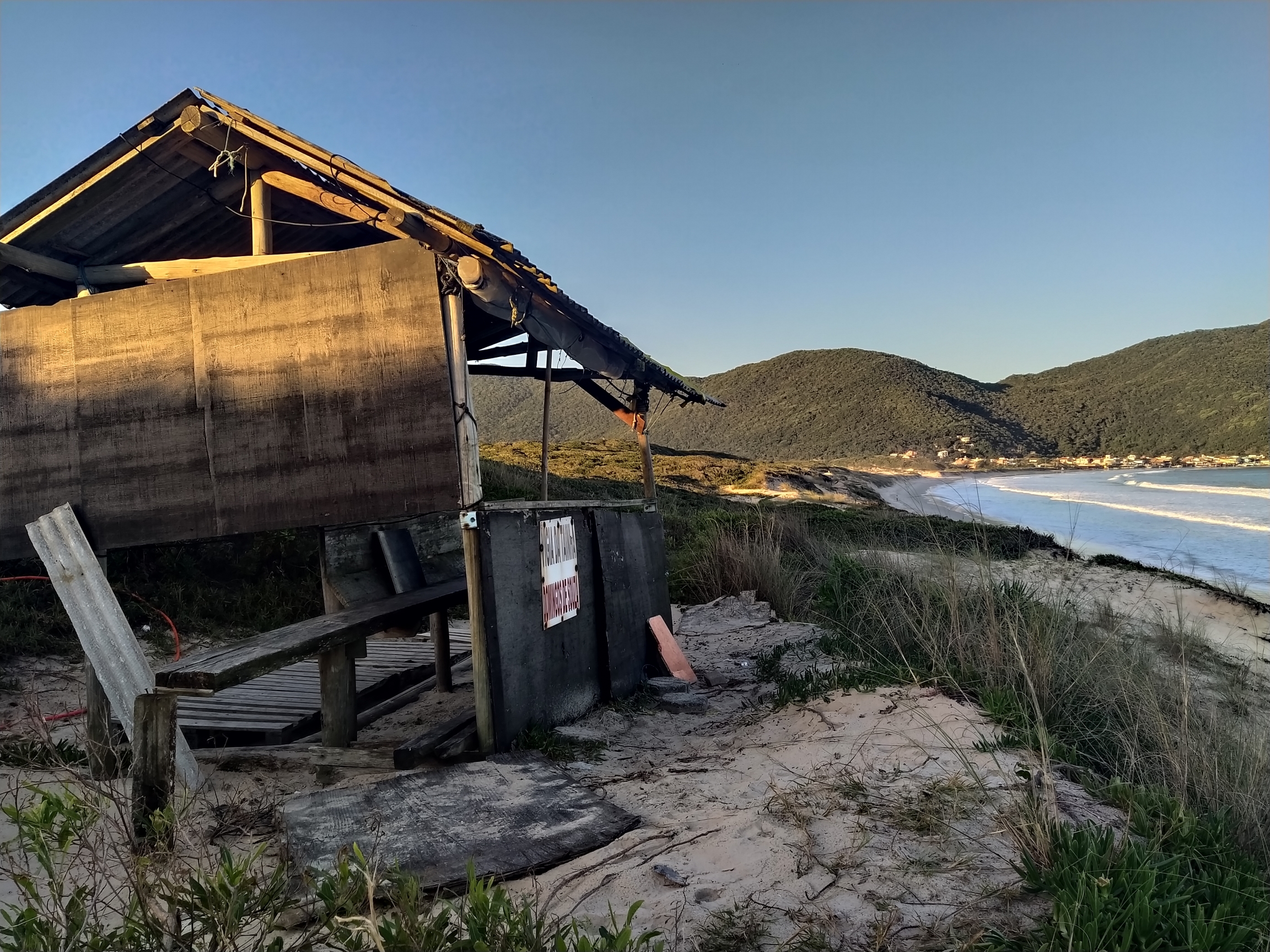 A small fishers' hut in  Pantano do Sul.

The Island of Marinheiros, 400 miles south of Florianópolis, is at the mouth of Brazil’s largest lagoon where the tainha are born and bred.

Viviane Machado Alves — a fisherwoman and a leader in the Brazilian Movement of Small-Scale Fishermen and Women — said there are areas where almost everyone has been infected by COVID-19.

“There are no deaths, thank God. ... But a lot of cases, and the vaccination, like everywhere in Brazil, it’s very slow.”

“There are no deaths, thank God,” she said. “But a lot of cases, and the vaccination, like everywhere in Brazil, it’s very slow.”

She said their biggest issue lately is that they’ve been having a hard time selling their catch. It’s shrimp season, but since there are no tourists, she said, they’ve lost a lot of income.

Last year, the government provided a substantial emergency monthly stipend for informal workers, including fishers. It was cut, then brought back — but highly reduced.

“Fishers have had to expose themselves more to the virus,” said Cristiano Quaresma, a member of the Monitoring Group on the Impact of Coronavirus on Fishing Communities. “In having to go out and sell the fish, they are exposed to the public, and this causes an increase in infections.”

Fishing communities in northeastern Brazil have had it particularly hard.

On the edge of the small fishing village of Siribinha, Ceudes Reis dos Santos pushes his boat out into the estuary. He and his wife are out crabbing most days of the week in the mangrove forest a short ride from their home.

Reis dos Santos spoke to The World in late 2019 about the impact of a massive oil spill that covered Brazil’s northeastern coastline for more than 1,500 miles. Out of fear of contamination, Brazilians there stopped buying fish and seafood. Small fishers like Reis dos Santos found it hard to stay afloat. This was just a few months before the pandemic.

“Difficult years, difficult years. ... We had some hard times. Stores closed. Here in Siribinha, we had some cases. The doctors say that 80% of the community had it…"

“Difficult years, difficult years,” Reis dos Santos said. “We had some hard times. Stores closed. Here in Siribinha, we had some cases. The doctors say that 80% of the community had it ... Tourism fell a lot. But we were able to sell some of our catch. Not a lot, but little by little.”

Cristiano Ramalho, a professor at the Federal University of Pernambuco, blames the government’s lack of support for fishing families.

“Without a doubt, [the pandemic] made the coastal communities some of the most vulnerable ... in Brazil.”

“The arrival of the pandemic found these communities that were already suffering from a historic lack of public policies, and the huge impact of the oil tragedy,” Ramalho said. “Without a doubt, it made the coastal communities some of the most vulnerable for COVID-19 in Brazil.”