When I found out that I was pregnant in early February, Arizona had barely begun its COVID-19 vaccine rollout for essential workers. I asked my midwife what she thought about me getting the shot, and she recommended it immediately.

I wasn’t a priority yet for vaccination. I was 42. Occasionally, I would get a tip about leftover vaccines at different clinics. One time, I jumped in my car and I drove 40 minutes. But I had no luck.

I read that pregnant women have elevated risks of facing severe COVID-19 complications, or even death, in comparison to people of their same age range. The US Centers for Disease Control and Prevention says pregnant people can choose to get the shot, and advises them to check with their doctor. I was ready to be vaccinated.

But then I had a sudden change of heart.

Related: Countries offer incentives for people to get vaccinated

“I was kind of afraid that you [already] took the vaccine,” said Alicia Perrone, my mother. She’s in Uruguay, where I’m from, and we chat often through WhatsApp. She’s not one to give her opinion often, so when she does, I listen. 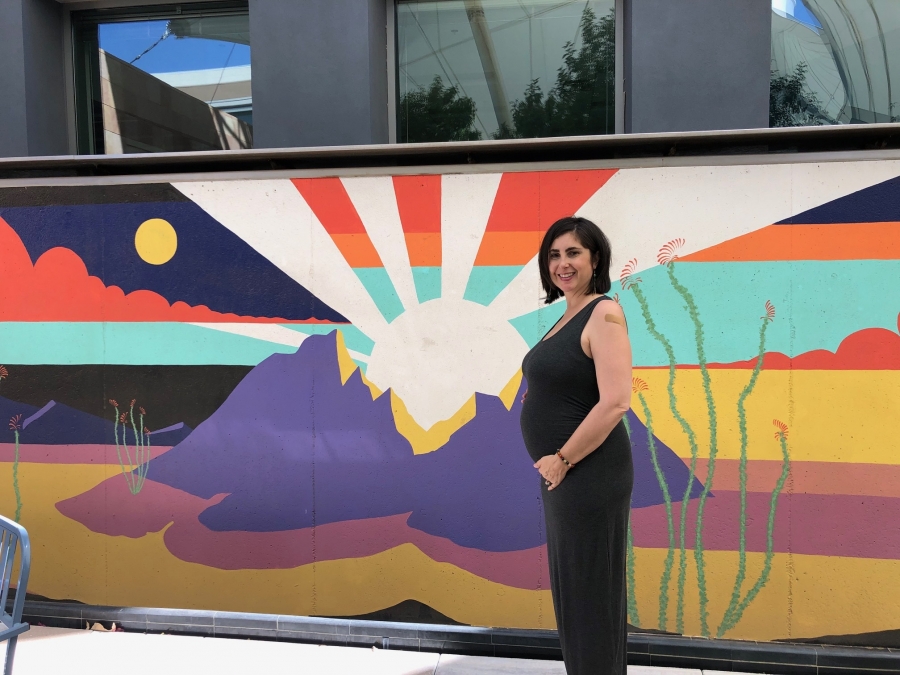 Valeriá Fernandez poses for a photo while pregnant.

“They are new vaccines and we really don’t know what the effects would be in the future,“ she said.

Then she told me something else that made me hesitate.

In Uruguay, the COVID-19 vaccine was not recommended by health authorities for pregnant women due to lack of data on its effects. At that time, the government was offering Pfizer and Sinovac vaccines.

That was also true for other countries in Latin America.

Related: Efficiency over privacy: How trust in the Chinese government helped contain the pandemic

I wondered how other women there were making their decision. If there were even shots available.

In Guatemala, health authorities are not giving the shot to any pregnant person. In Mexico, vaccines are only available for those 50 and older, and for health workers.

I talked to Elvira Olvera, who is seven months pregnant and lives in Mexico City.

“If I get a chance at the shot when they start giving it, it will be a hard decision, because I don’t know if it would affect the baby."

“If I get a chance at the shot when they start giving it, it will be a hard decision, because I don’t know if it would affect the baby,” Olvera, 37, said.

Olvera and I have the same dilemma, but different information, depending on our location.

Each government has to consider the type of vaccine, the risks of infection in a community and supply, said Ruth Faden, founding director of the Johns Hopkins Berman Institute of Bioethics.

I asked her: Why is it so difficult to issue a recommendation?

“There has been a long-standing problem. That evidence on new drugs and new vaccines, in terms of safety and efficacy in pregnancy, follows evidence on those questions for other adults. So, there is a lag,” she said.

The World Health Organization says that women can make the decision if the benefits outweigh the risks in their unique situation. Faden said that’s a lot of pressure to put on pregnant women — on top of the pressures we already face from society.

Everyone has an opinion about how to give birth, how long to breastfeed, how to rock babies to sleep, how to burp them.

“Everything is questioned. Right? And there is a tremendous sense of responsibility,” said Faden. “Also, we know in our hearts, but also, when we study this, that if you ask a pregnant woman in a decision like this: ‘What is the most important thing to you?’ they would say the health of the baby, almost always.”

I have to agree with that.

For example, it is untrue that the Pfizer shot causes infertility because of the alleged presence of a protein known as syncytin-1, important for the creation of the placenta. But that myth has been shared through social media. Even after it was debunked by the Associated Press, a health care professional in Arizona repeated the falsehood, and told me I would lose my baby if I took the shot, and I would be infertile.

“There is nothing, no basis … no shred of even theoretical reasoning, why this vaccine should affect fertility."

“There is nothing, no basis … no shred of even theoretical reasoning, why this vaccine should affect fertility,” said Faden.

Recently, two pregnant women in Uruguay died of COVID-19. The country had also had a spike in COVID-19 infections, despite its high rates of vaccinations. Shortly after these deaths were reported, Uruguayan health authorities prioritized access to vaccines for pregnant people.

Meanwhile, researchers analyzed early data from the CDC on pregnant people in the US who took the Moderna and Pfizer shots already and concluded it doesn’t pose a serious safety risk.

But by then, I had already made my decision.

For me, the benefits of getting the shot outweigh the risks.

New evidence shows that as a nursing mother, I could pass immunity to my breastfeeding son and protect my unborn baby — and my experience could become part of that research.

That was powerful enough for me.

In late April, I went to a vaccination site in Tempe, Arizona. A health care worker there told me I would be getting the Pfizer shot and asked me which arm I preferred.

I was so nervous.

Another person asked me if I was pregnant and if I consulted with my doctor. “I did,” I told them.

As they were giving me the shot, I looked away because I’m afraid of needles. I held my breath and cried a little. In a second, I felt the weight of the world.

Had I made the right decision?

I was privileged to have a choice to make in the first place. But it wasn’t an easy one.

Valeria Fernández is an independent journalist in Phoenix, Arizona, and the co-producer and co-host of Comadres al Aire, a podcast dedicated to the health of women, transgender and nonbinary people.