The guilty verdict in the Derek Chauvin trial over George Floyd's death was celebrated by many across the United States and around the world.

On Tuesday, a Minneapolis jury found white ex-police officer Derek Chauvin guilty on all three counts of murder and manslaughter in the May killing of Floyd, a Black man, whose final words, “I can't breathe,” reverberated across the world.

Related: Black people can no longer tolerate 'a state of terror,' says mayor

The verdict signaled hope but also served as a reminder that governments need to rethink policing practices in the US and around the world.

Floyd's death emphasizes just how much must still be done “to reverse the tide of systemic racism that permeates the lives of people of African descent," said UN human rights chief Michelle Bachelet. 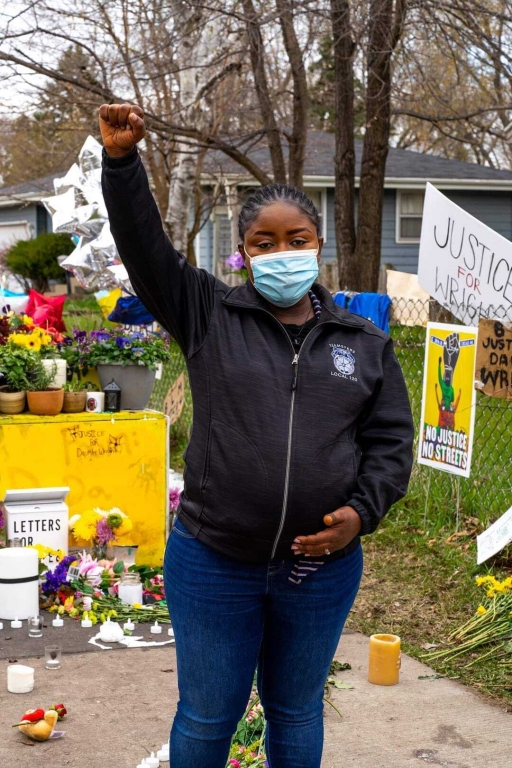 Alfreda Daniels Juasemai, a community organizer, holds a fist up in the air.

Alfreda Daniels Juasemai, a community organizer in Brooklyn Center, Minnesota, has mixed emotions about the verdict and what it means for racial justice in her community, where the recent killing of Daunte Wright also sparked outrage, mass protests and calls for police reform.

Juasemai is the co-founder of the Black Immigrant Collective.

Juasemai was born in Liberia during its civil war in the 1990s; her family fled to neighboring Côte d'Ivoire, and then to a refugee camp in Ghana.

That was home for six years before she moved to the United States.

Juasemai sat down with The World's host Marco Werman to discuss the Chauvin trial verdict and what it might signal about the potential for racial justice in the future.

Marco Werman: Alfreda, you posted yesterday saying that anxiety was running wild in your Brooklyn Center community. How are you feeling today?

Alfreda Daniels Juasemai: Today, I'm feeling some sort of relief. Before the verdict was coming out, I got more and more anxious. My anxiety, for sure, was just running wild. I felt stressed, so I needed to come home right away. I'm eight months pregnant, so I needed to come home and be where I felt safe to receive this. And so, when the verdict was being read, I couldn't believe it, that finally, someone is going to be held accountable. I wouldn't call it justice, though, I'll just call it accountability. Justice would be if the police officer who shot and killed Philando Castile was also prosecuted ... the police officer who shot and killed Jamar Clark was also prosecuted ... and that George Floyd would be here — and those people wouldn't be dead.

This does look like a win in terms of holding police accountable, at least this one police officer, former police officer. Your organization, the Black Immigrant Collective, was formed after the election of Donald Trump. As the co-founder, I'm curious to hear from you what this verdict represents in terms of dismantling systemic racism and your expectations of President Biden in this regard.

It looks like there's a light at the end of the tunnel. But I should also remind you that 18 flights — deportations — were sent from here to parts of Africa, two months after President Joe Biden was sworn into office. And they were all Black immigrants. These people are people who have been in the US for a year, who came here asking for asylum, and they didn't get their day in court and they were just deported. So, then we look at stuff like that and be like, really? Do we have light at the end of the tunnel?

As a woman of color, as a Liberian immigrant yourself, what occurs to you about the way forward after these verdicts? Where do you find hope?

I'm not going to lie to you. I don't see hope. I see in my generation a continuing fight. The more I think about being hopeful about the system, the more I feel like once that happens, once I feel some sense of hope for this and that the system got this, that I'm going to be too relaxed for a couple hours before something else happens. So, I'm always on edge. I think the hope of dismantling and re-creating the system lies probably with the generation after us.

My husband — I'll always want to know where he's going. I don't like it when he takes walks in our neighborhoods. I don't like it when he goes for his evening rounds. I have to drive behind him. I'm expected to bring a child into this system in just a few weeks. I'm already worried about how am I going to have this conversation with my child. And my body has already been keeping that trauma for so long, the scars of this trauma ... for so long. I worried about how I would react if I ever get pulled over with the police because I don't know the scars that my body has kept either. So, it's hard to have hope when you haven't had time to breathe.

You drive behind your husband when he takes an evening run? I think that's really important for listeners to hear, to understand that that's not something white people do.

Correct. He's a captain in the army. We've done everything. We've had his military ID over his regular driver's license. I need to make sure that he's safe.

When is the time to talk about healing and what will healing involve? I mean, do we really wait for the next generation?

No. The thing is, with us Black folks, we already know something else is going to happen, right? So, it's mostly about strength and resilience to stay in this work.

This verdict on Derek Chauvin, do you think it will change how police treat your community of Brooklyn Center, how they engage with the people in the community going forward?

Honestly, I don't think so. I think they will probably be a little bit smarter on how they pull people over and how they murder them. For example, there are laws being passed with cellphones — you're not supposed to have your cellphone with you. Stuff like that limits people's ability to record. What if I'm pulled over in the middle of a highway or country road ... in Minnesota? And there's no one there — because George Floyd didn't record that. It took the community to record that. What if I'm pulled over somewhere where there's no community there to record them murdering me or my husband or my kid or another community member? What are we going to say?

As you said, Alfreda, you're expecting a new baby in just a few weeks, if not days. What are you feeling today about the world and the community you're bringing this new life into? And is today a little different than, say, what you were feeling a few days ago?

Maybe? Yeah? You know. It feels like there's another layer off of my shoulders a little bit. But I am so worried that maybe my child won't even see tomorrow because I could be pulled over and shot and killed. And my husband and I have had this conversation. Sometimes, I love it here. This is home. But now that we are expecting a child, I question if this is where I want to raise my child. I sometimes ask, should we probably go back to Liberia? But we can't live in Liberia. We haven't lived there for years. We both are from there. But this is home for us. But home doesn't see us as part of this home. This is a conversation that we have struggled over many times.

Years from now, when you look back at this moment with your child, what would you tell them to help them understand what we've been living through? And do you talk to them about lessons you've learned in the US or in Liberia or what do you tell them?

I find myself collecting every article of every Black man that has been killed, of every Black woman that has been killed, verdicts in those cases. I don't know why. Maybe at some point, we will have this conversation with our child or children — because we're planning on having a few more — and maybe we need that to show them, this could be you. And even though we're planning on raising our children to be strong and vocal, I think my husband's suggestion was, let's go through having the baby. Let's, for once, just enjoy the innocence of that child before we think about letting them know what world we brought them in.

Collecting all those accounts of Black people killed, as you think about the future, I mean, that can't be easy.

This interview has been edited and condensed for clarity. AP contributed to this report.