There's been a steady focus on migrants arriving at the US-Mexico border. But refugees — less in the spotlight — have seen their chances of entry to the US grind to a halt, leaving them in unexpected limbo.

Many refugees have already been vetted and approved for entry through official US and United Nations agencies, but President Joe Biden has yet to make an official commitment to rebuilding the US refugee program.

Related: Plans for a refugee camp on Lesbos is too isolating, critics say

Basuze Madogo, who helps resettle refugees through World Relief, a nonprofit based in Memphis, Tennessee, has recently needed to inform families that relatives who they hoped to welcome at airports would not arrive as scheduled — at least not yet.

Madogo even had to break the news to his own brother. He thought his wife, from Democratic Republic of Congo, would join him in Tennessee in March.

“It left him very devastated. ... But I told him in a way to give him hope. That it wasn’t an issue of his wife’s case, it was more about waiting for the president to sign the deal.”

“It left him very devastated,” said Madogo. “But I told him in a way to give him hope. That it wasn’t an issue of his wife’s case, it was more about waiting for the president to sign the deal.”

Former President Donald Trump steadily cut the number of refugees allowed into the US, setting the admissions goal in his final fiscal year in office at 15,000 refugees — the lowest level since the signing of the Refugee Act in 1980, which established the US system.

As a candidate, Joe Biden promised to restore the program immediately. In early February, he reiterated that promise in his first foreign policy speech, saying:

“I’m approving an executive order to begin the hard work of restoring our refugee admissions program to help meet the unprecedented global need. It’s going to take time to rebuild what has been so badly damaged, but that’s precisely what we’re going to do.”

Biden proposed a new plan for refugee admissions in fiscal year 2021 that would increase the ceiling to 62,500 — with a promise to move that total to 125,000 for his first full fiscal year in office.

Things looked so certain that more than 700 vetted and approved refugees were booked on recent flights to the US, in coordination with the State Department and refugee resettlement agencies.

Yet, Biden has not signed the document, the presidential determination that puts such changes into effect. Without that signature, Trump’s version of the US refugee program, with its restrictions, is left in place.

Related: Fighting in Syria has subsided. But refugees in Lebanon still hesitate to return home

In turn, booked flights have been canceled by the State Department. Trump’s restrictions and limits remain in place and US officials have yet to explain why. Those working on behalf of refugees, along with families waiting for loved ones, are left frustrated.

The State Department did not grant The World an interview, but a spokesperson pointed to the executive order issued by Biden and wrote that it “establishes a pathway to rebuild and expand the US Refugee Admissions Program that is commensurate with global need, with our values as a nation, and consistent with domestic law and international obligations, while ensuring the security and integrity of the program.”

US officials have denied that the delay is linked to the increasing number of migrants at the US-Mexico border and resources dedicated to that challenge.

Those critical of the delay emphasize that before Biden submitted his plan to Congress to raise the number of admitted refugees to the US, resettlement agencies reviewed it to ensure that resources and capacity were in place.

“All of those boxes were checked,” said Nazarin Ash, vice president for global policy and advocacy with the International Rescue Committee, a nonprofit humanitarian aid group based in Washington, DC.

“I wasn't concerned about either the capacity or the resources to receive refugees. This is an opportunity to affirm the US' bipartisan tradition of assisting the most vulnerable.”

“I wasn't concerned about either the capacity or the resources to receive refugees. This is an opportunity to affirm the US' bipartisan tradition of assisting the most vulnerable.”

Angie Plummer, executive director of Community Refugee and Immigration Services, a nonprofit in Columbus, Ohio, said that keeping refugee families in limbo is like “salt in the wound,” after years of delays and severe restrictions under the Trump administration.

“If it is a political consideration, connected to the situation at the border, the important thing to keep in mind is real people who have already been suffering for so long are going to continue to suffer.”

“If it is a political consideration, connected to the situation at the border, the important thing to keep in mind is real people who have already been suffering for so long are going to continue to suffer.”

Plummer’s organization helps new refugees settle in the US. After Biden’s February speech, her colleagues began the work of lining up jobs, apartments and furniture for newcomers they thought would be here by now. She believes the Biden administration wants to allow in more refugees.

“I have no doubt that they want to support the program. I'm hopeful there'll be some transparency and we'll find out soon,” she said.

But the delay also risks real complications. The refugee selection process involves extensive security and medical screenings, and one of the screenings that Madogo’s sister-in-law underwent is now about to expire.

That could mean starting a months-long process all over again.

“My mom and the rest of the family was supposed to come."

“My mom and the rest of the family was supposed to come,” said Kajene Etienne, 28, a truck driver who lives in Columbus, Ohio. He spoke while hauling auto parts to Flint, Michigan, across state lines in a freight truck. He logged 450 miles before heading home. 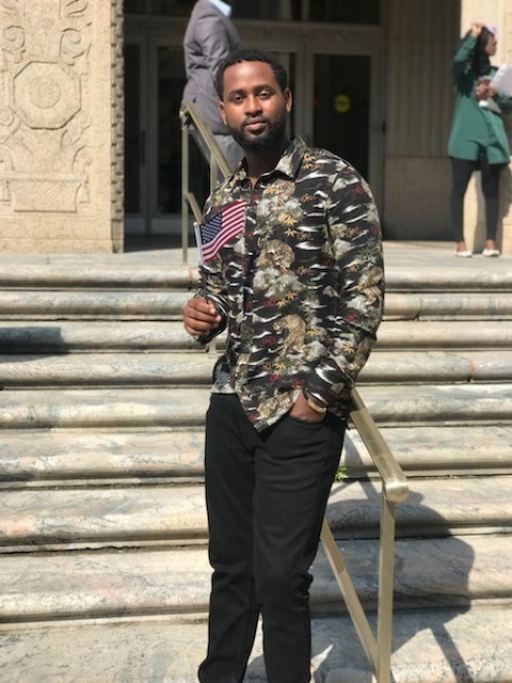 Kajene Etienne, 28, is a refugee who has resettled in Columbus, Ohio.

In many ways, Etienne’s life has been one on the move. He was born in DR Congo but, at age 3, his family fled civil war.

After many years in a refugee camp in Rwanda, Etienne was allowed into the US in late 2013. His brother followed a few years later.

His mom and siblings had been approved to enter, as well, but Donald Trump became president and decided that the US would take in far fewer refugees. He also banned many applicants from majority-Muslim and African countries.

Etienne’s family has since waited for the greenlight to enter the US from a crowded refugee camp in Rwanda, joining tens of thousands of other refugees worldwide also approved to enter the US.

Etienne’s mother, Mukobwajana Kandenzi, feels stranded in Rwanda, where she has spent more than seven years at the large Gihembe refugee camp.

“I hoped to be in the US with my sons by now,” she said, speaking Kinyarwanda, a Bantu language, as her son translates during one of his regular calls home. He regularly spends $10 on a prepaid card that lets him speak with his mom for 35 minutes over her old flip phone. 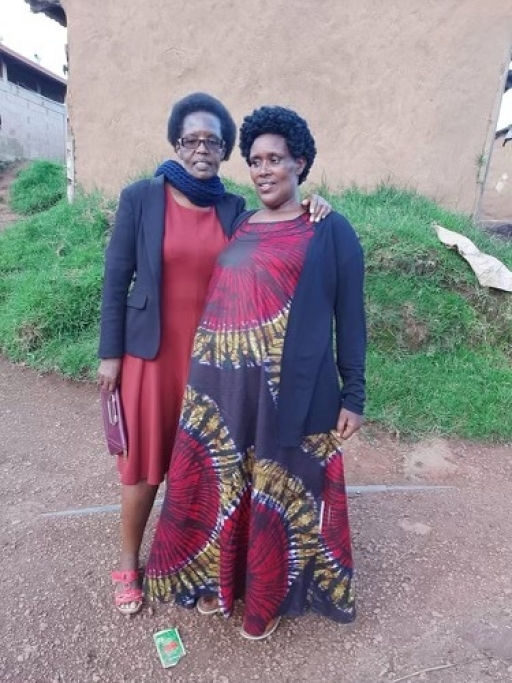 Mukobwajana Kandenzi, 58, (right) from Democratic Republic of Congo, poses for a photo at the Gihembe refugee camp in Rwanda.

Kandezi, 58, lives with thousands of other Congolese in the refugee camp, in small identical brick homes, lined up in tight rows. Eitenne wires cash to her and his siblings for food, clothing and the basics.

Many families at the camp where Kandenzi lives were expecting to go to the US soon.

She wants to deliver a message to President Biden:

“First of all, to thank him for the fact that he’s willing to bring people in to change their lives. And to wish him a good life.”

She also hopes that he signs off on the presidential determination soon, so that she can see her sons after years of being apart.