On the outskirts of Riohacha, a border city in Colombia, María Isabel Parra whacks a soccer ball with her right foot and rushes for first base.

Playing kickball in this dusty field helps the 21-year-old deal with some of the stress that comes with being an unemployed migrant, and also brings back memories of home.

“It reminds me of my childhood in Venezuela, when I used to play this at school and in the streets."

“It reminds me of my childhood in Venezuela when I used to play this at school and in the streets,” she said, adding that it's a good way to meet people and “kill time.”

Kickball league organizers hope kickball can facilitate integration between Venezuelan migrants like Parra, and their new neighbors, as anti-immigrant sentiment grows around Colombia.

Related: 'I get screamed at in the streets': Colombia's patience with Venezuelan migrants wears thin

They also hope the sport entertains young people in poor neighborhoods like Brisas del Norte, where there are few employment opportunities. 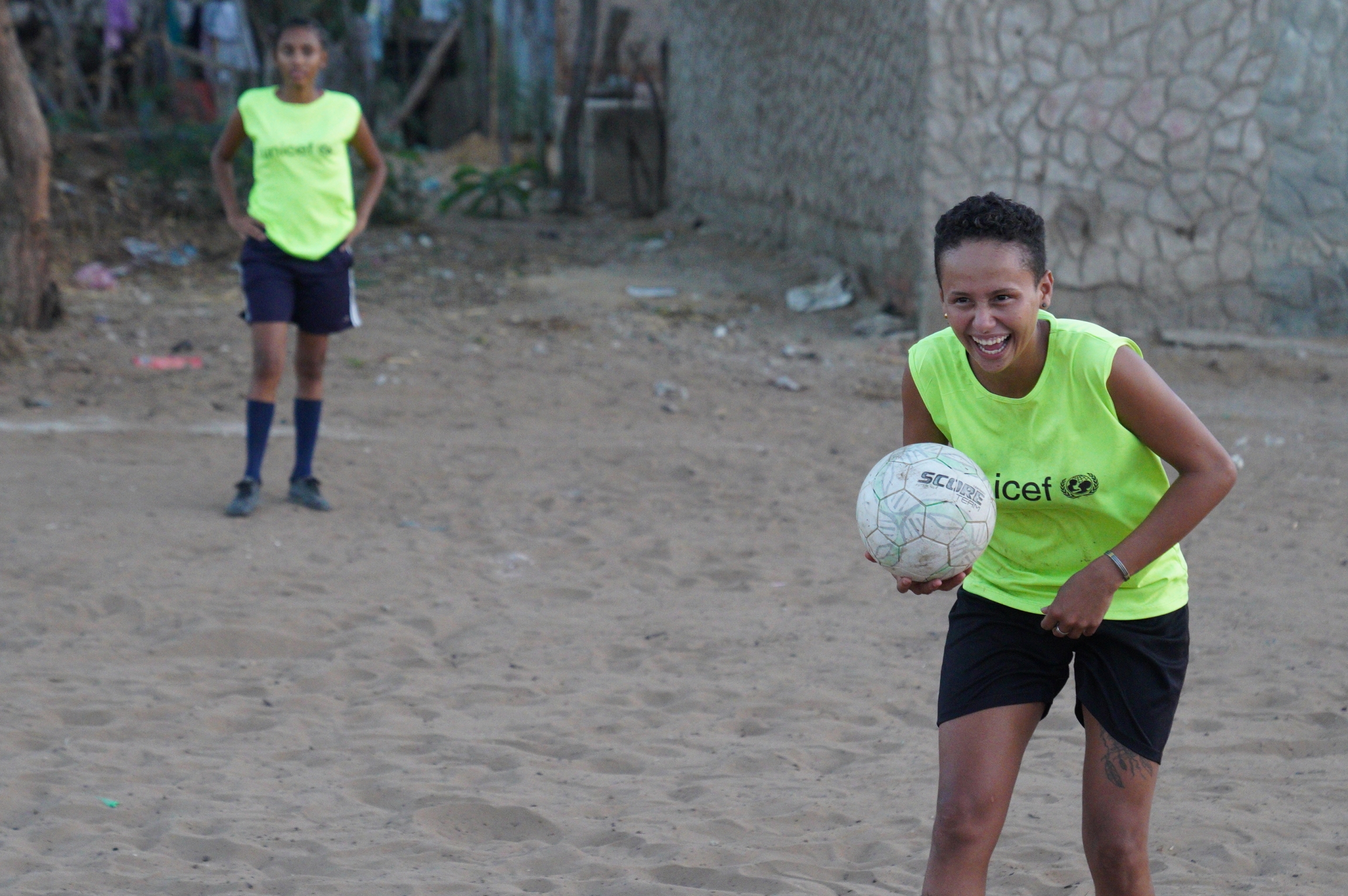 Maria Isabel Parra, 21, says that playing kick ball helps her to meet new people and deal with some of the stress that comes with being an unemployed migrant.

"Our message to young people is that it doesn't matter where you come from. ... We are all in the same field now and we must learn to live together."

“Our message to young people is that it doesn't matter where you come from,” said Jairo Ibarra, from the Brisas del Norte Foundation, a community group that started the league.

“We are all in the same field now and we must learn to live together.” 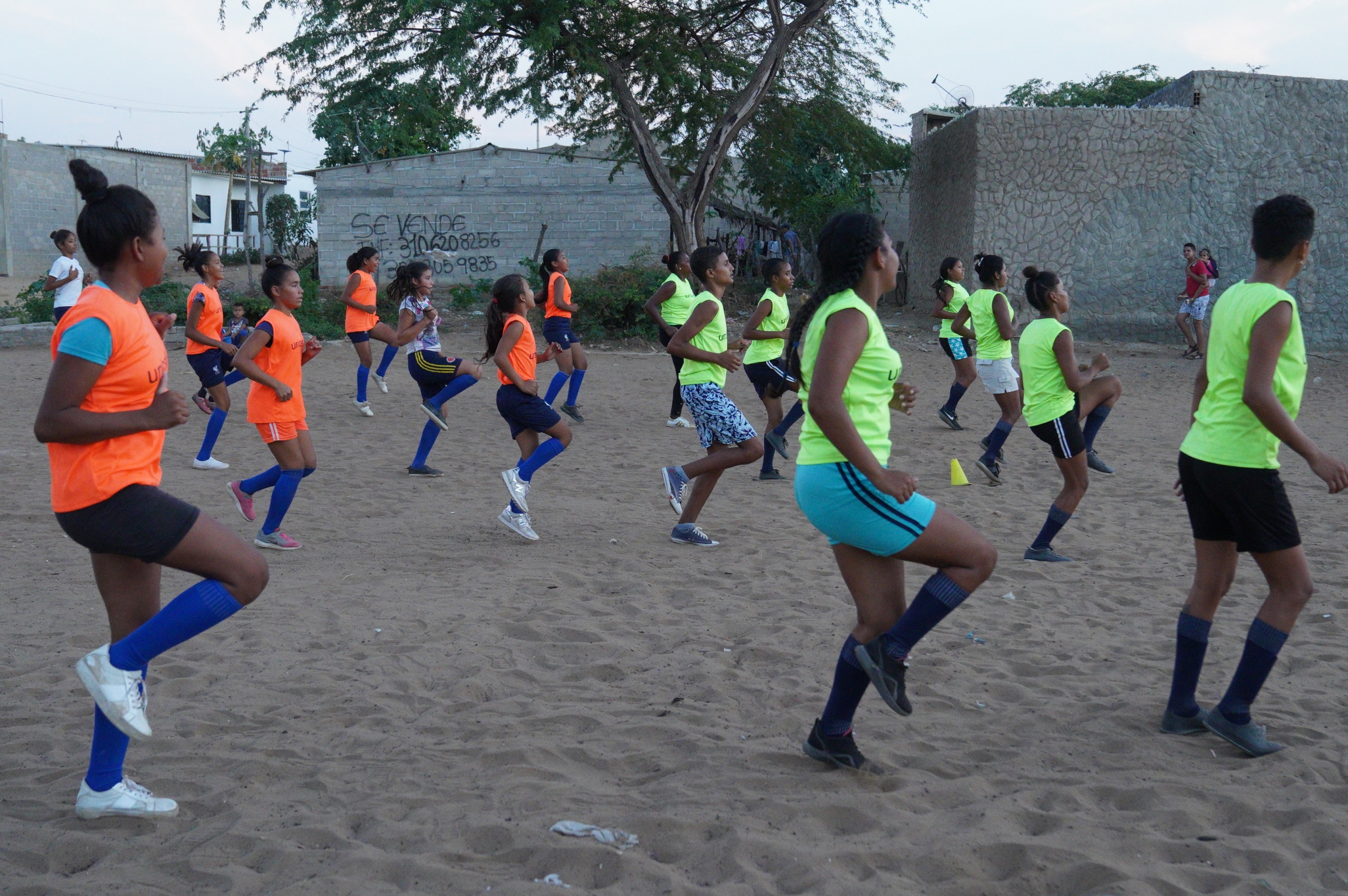 Kickball players in the Brisas del Norte neighborhood do a warm up drill before a match. The league is open to children and adults.

In Brisas del Norte, an area of unpaved roads where most people live in homes made from scrap material and tin roofs, relations between Colombians and Venezuelans have been good so far.

But that hasn’t been the same in other parts of Colombia, currently home to 1.8 million Venezuelan migrants and refugees.

Related: Venezuelan military defectors struggle to get by in Colombia

In Bogotá, the capital, city officials recently had to remove posters from the streets that told residents not to hire Venezuelan workers.

Meanwhile, Mayor Claudia López has been blaming Venezuelans for a rise in violent crimes.

“There’s a small group of migrants who are extremely violent and pose a threat to our security,” Lopez said recently after a policeman was killed by a Venezuelan immigrant in Colombia’s capital.

She added that the national government gives Venezuelans “everything,” without assurances for locals.

More than 5 million Venezuelans have left their country in recent years amid food shortages at home, and a collapsing economy run by an increasingly authoritarian government.

Colombia has taken in about a third of all Venezuelan migrants and recently passed a law that grants work permits and access to health care to more than a million Venezuelans who are currently undocumented.

But the national government’s progressive approach toward immigration has been met with the disapproval of many locals who worry about the high cost of integrating Venezuelans, many of whom are poor, as Colombia goes through a steep recession sparked by the pandemic.

According to a recent Gallup poll, 70% of Colombians have a negative view of Venezuelan migrants, and 6 out of 10 disagreed with President Iván Duque’s recent decision to legalize undocumented immigrants from Venezuela. 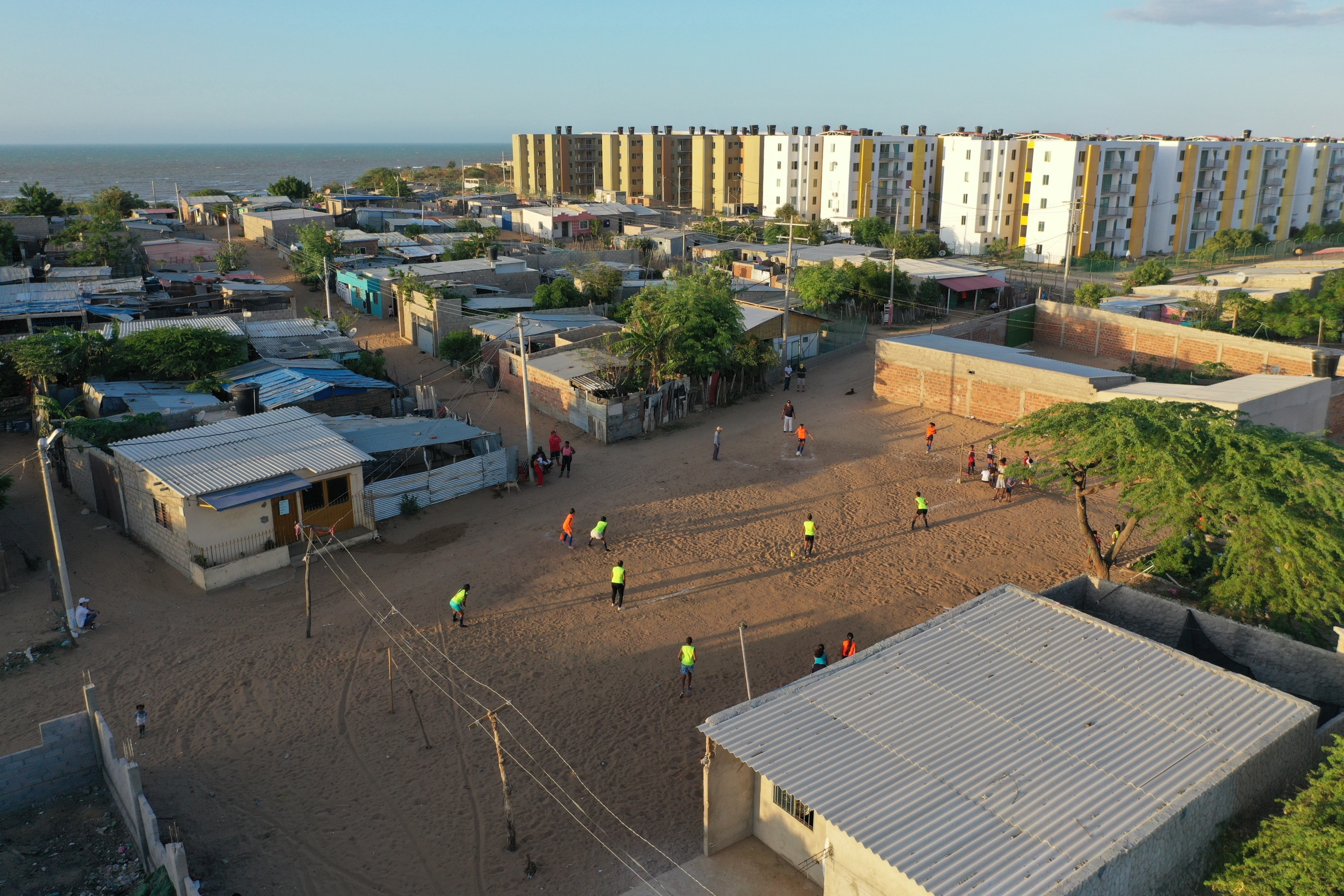 Children play kickball in a dusty field during practice in the Brisas del Norte neighborhood of Riohacha, Colombia.

Alejandro Daly, a youth leader in Bogotá, runs a project known as the Xenofobia Barometer that uses software to monitor what is written about Venezuelan migrants on social media. He says that every month, Colombian accounts are posting 40,000 xenophobic messages on Twitter. According to Daly, one out of every five messages about Venezuelans has a xenophobic tone.

“We see there is a strong correlation between news stories that link Venezuelan migrants and refugees with crime and the levels of xenophobia."

“We see there is a strong correlation between news stories that link Venezuelan migrants and refugees with crime and the levels of xenophobia,” he said.

Daly added that media outlets in Colombia give more space in their news feeds to stories that link Venezuelan migrants with crime than to other news about migration.

In this challenging environment, organizations that work with migrants in Colombia are no longer just providing legal assistance or helping with jobs.

Some also try to change views about immigration while increasing opportunities for locals and foreigners to interact.

And in Riohacha, kickball has become a way to do that.

The sport is largely unknown to Colombians, who prefer soccer. But it’s common in Venezuela, where baseball is the main sport.

The first to join the Riohacha kickball league were Venezuelan migrants and their children.

Slowly, locals also started to participate, including Jenny Ibarra, a mother of three from Riohacha.

“In this game, you don’t have to run after a ball all the time, so there’s more time to socialize. ... We’ve learned about the culture of our Venezuelan teammates, the dishes they cook and how they eat black beans.”

“In this game, you don’t have to run after a ball all the time, so there’s more time to socialize,” Ibarra said after a match. “We’ve learned about the culture of our Venezuelan teammates, the dishes they cook and how they eat black beans.” 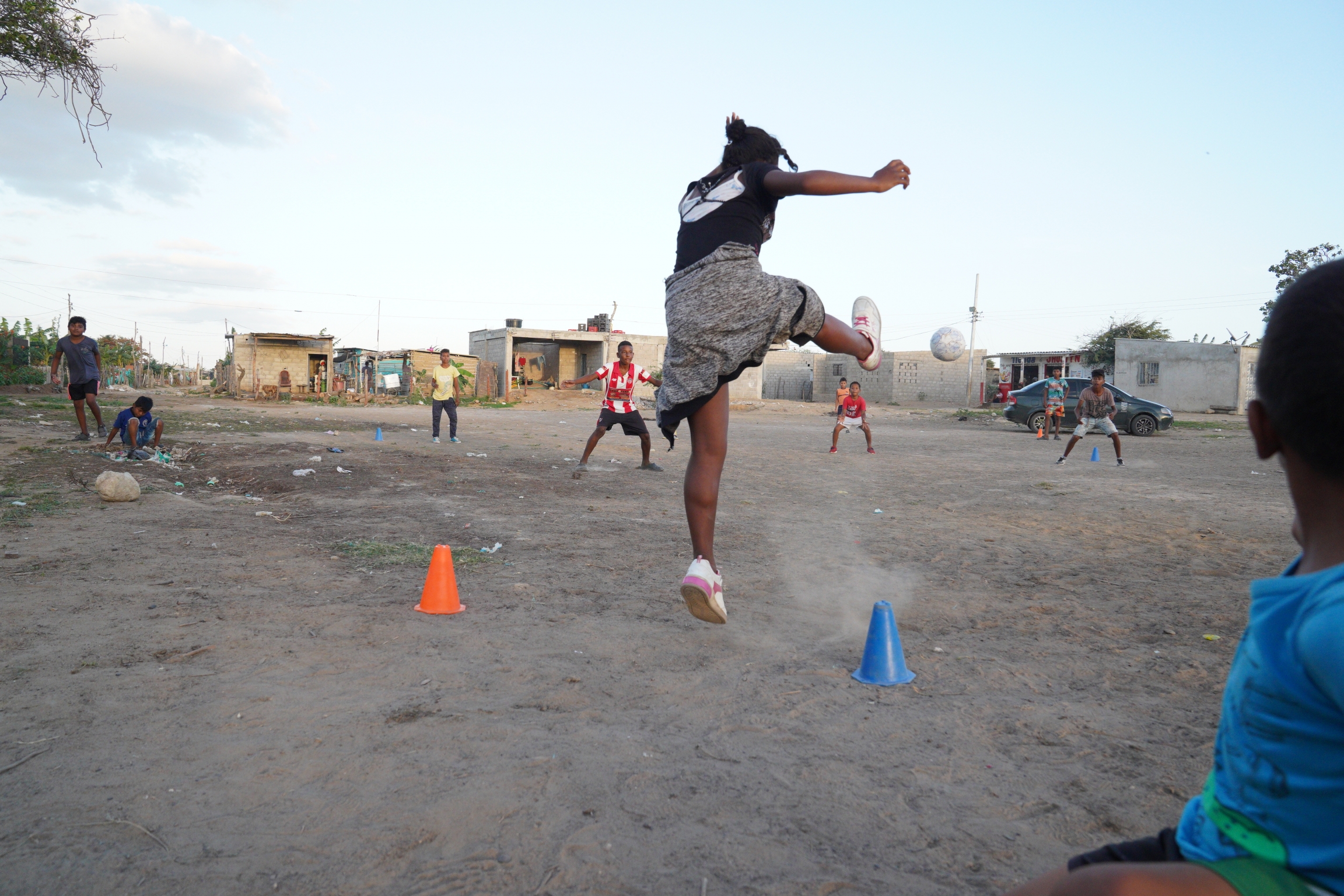 Kickball players in the Villa Isler neighborhood do a warm up drill before a match. The league is open to children and adults.

So far, there are three adult teams in the kickball league and four squads for children under 14.

UNICEF has donated uniforms and equipment and the refugee agency UNHCR has featured the league on its website, describing it as a positive example of integration.

“It’s a way to practice respect for each other and teach positive values."

“It’s a way to practice respect for each other and teach positive values,” he said.

Gibel Gonzalez, one of the team captains, said that adjusting to Colombia hasn’t been easy. She started out by selling coffee on the streets of Riohacha and said that local street vendors tried to run her off the most profitable streets.

“They accused me of coming here to take work away from Colombians, she said. “It makes you feel bad.” 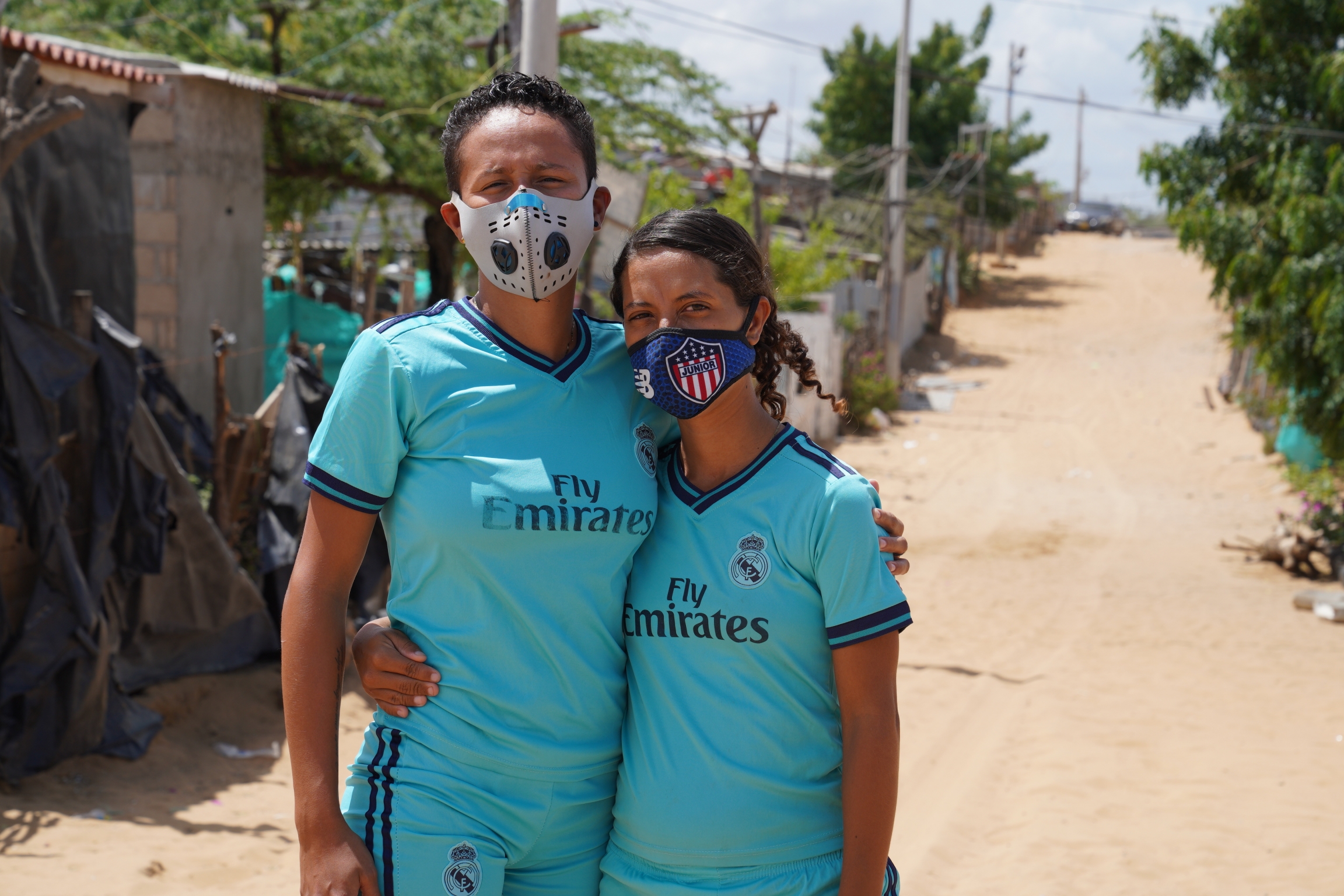 Team captain Gibel Gonzalez (right) says that in Venezuela she played kickball casually. "Now I have a team with a uniform and practices, and for that I'm very grateful," she said.

Now, Gonzalez works with her husband making door handles and frames for windows. She said that the kickball league enables her to let off some steam, and is also helping her to take her game to the next level.

“In Venezuela, we played casually,” Gonzalez said. “Here, I have a team with uniforms and regular practices. And for that, I’m very grateful."