France’s theaters may be closed, but many artists are insisting that the show must go on.

For nearly a month now, artists across France have been illegally occupying empty cultural spaces as part of a call to “reopen culture.”

“Everybody wants to work."

“Everybody wants to work,” said Denis Gravouil, the director of CGT Spectacle, a cinematography and audiovisual trade union behind the occupation. 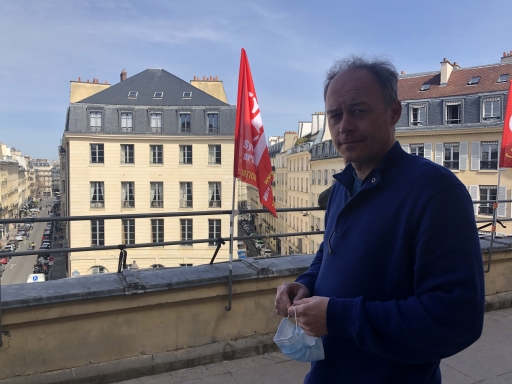 Denis Gravouil, a cinematographer and head of the CGT Spectacle Trade Union, stands on the balcony of the Odeon Theater. Gravouil is one of 42 people who have been illegally occupying the building since early March.

Gravouil is one of 42 people that have been living inside the Odeon Theater on Paris’ Left Bank since early March. The majority have been unemployed since the start of the coronavirus pandemic.

Today, the lobby is draped with union flags and cartoons poking fun at the French government. Air mattresses take up parts of the marble floors. There’s even an entire corner dedicated to making protest signs.

While communication with the public theater’s directors has been shaky at best, Gravouil said they’ve been hesitant to kick the artists out.

“Sure, it’s legally possible for the [directors] to make us leave ... but it’s not exactly a good look for an artist to kick out other artists,” Gravouil said.

The group’s demands to the government are twofold: Reopen cultural spaces with proper social distancing and mask-wearing policies and provide artists with greater financial support. 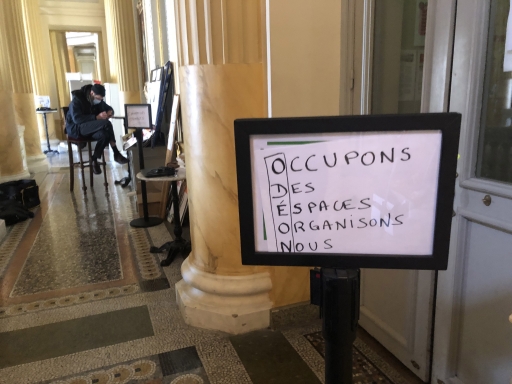 Odeon Theater occupants are calling on the French government to reopen cultural spaces and expand unemployment benefits for artists.

Many artists in France work under a special status called “intermittent,” which takes into account the seasonal nature of their work.

During the off-season, the country’s 250,000 intermittents receive generous unemployment benefits. To qualify, artists have to work at least 507 hours a year. Benefits are then calculated based on their average monthly income during their working period.

Last May, the French government said it would extend regular unemployment benefits through Aug. 21. But Gravouil said that’s still not enough for most people to live on.

“Especially in cities like Paris, you’re lucky if those benefits cover your monthly rent,” he said.

In March, the government announced an extra million euros in financial aid for the country’s cultural sector.

Related: Is France 'sleepwalking' into voting for the far-right?

“No other country in the world supports culture like we do,” said France’s Culture Minister Roselyne Bachelot, who urged demonstrators to abandon their protests.

“Occupying cultural sites is not the right way,” she said. “These stunts are dangerous because they threaten fragile cultural sites.”

As for reopening, it won’t happen anytime soon. Despite efforts to avoid it, French President Emmanuel Macron announced a third, nationwide one-month lockdown on Wednesday.

Intensive care units in the Paris region are at 140% capacity, according to France's daily COVID-19 tracker via the Health Ministry. New daily COVID-19 cases have more than doubled since February, reaching more than 40,000.

Despite the deteriorating public health crisis, artists are still organizing outdoor performances. Every afternoon, people gather on the large terrace in front of the Odeon Theater in Paris for what’s called agora — free performances that range from classical orchestras to modern percussionists.

“People need this. ... Culture is something that should belong to everybody.”

“People need this,” said Valérie Massadian, a filmmaker and occupant who helps organize the agoras.

After all, she said, “culture is something that should belong to everybody.”