Consumers in China and the US prize American ginseng, most of which is grown in just one Wisconsin county, as a health food and traditional medicine. But demand has dried up amid the United States' ongoing trade war with China, economic impacts from the pandemic and anti-Asian rhetoric.

Ginseng is a knobbly, bitter root that has been used in traditional Chinese medicine for centuries. Native Americans also have a long history of using wild American ginseng, which once grew widely in the Appalachian region before it was overharvested in the 19th century. Ginseng may help boost the immune system, lower blood sugar and improve focus, although the US Food and Drug Administration says there’s not enough evidence to back up these claims.

Today, Marathon County produces about 95% of the total crop in the US, most of which was exported to Asia before the Trump administration started the trade war with China.

Aaron Mok wrote about the growing crisis for ginseng farmers for Civil Eats. His article follows the story of the Heil family farm in Wisconsin, which has been growing ginseng for four generations. He spoke to Joe Heil, a farmer for 25 years. 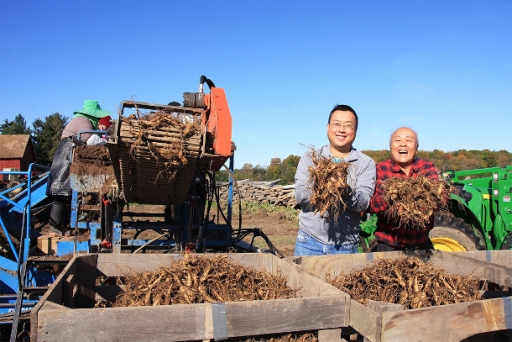 Will Hsu, left, harvests ginseng with his father Paul on their farm in Marathon County, Wisconsin.

“He runs a thriving ginseng business — or what used to be thriving before the pandemic and the trade wars,” Mok says. “He has around a thousand acres of land, which is probably [more] land than most ginseng farmers have in the county. So, he's been very successful in his business.”

The ginseng industry first began to suffer when former President Trump began his trade war with China, Mok says. Then the pandemic hit and business took another major blow. The American ginseng industry is export-heavy, Mok explains: 95% of ginseng revenue comes from exports to East Asia. Travel restrictions between China and the US because of the pandemic pretty much put an end to that.

Related: Iowans get a giant ad from China in their Sunday newspaper

“During harvest season, Chinese consumers would travel to Wisconsin to inspect the ginseng, to look at it, and to bring it back for their families. ... But because of travel restrictions, they're not able to do that. So, revenue has decreased a lot as a result.”

“During harvest season, Chinese consumers would travel to Wisconsin to inspect the ginseng, to look at it, and to bring it back for their families,” Mok explains. “But because of travel restrictions, they're not able to do that. So, revenue has decreased a lot as a result.”

Before the trade war started in 2018, the industry made between $50 and $70 million a year. Now, ginseng farmers make only around $10 to $15 million a year and ginseng prices have dropped from $50 a pound to $20 a pound. Fortunately, ginseng lasts quite a while after harvest, so farmers are holding on to their excess supply, hoping demand will increase when the pandemic subsides.

Related: While small dairy farms close, this mega-dairy is shipping milk to China

Mok found that a rise in anti-Asian rhetoric amid the pandemic has also created problems for ginseng farmers. He spoke with Will Hsu, president of Hsu Ginseng Enterprises, one of the biggest American ginseng companies in Wisconsin, as well as in the US. Hsu is Chinese and comes from a Taiwanese background.

According to him, when the trade wars hit, Ginseng Enterprises had to change their business model, Mok says. Prior to the trade wars, the company’s revenue came mainly from ginseng exports to China; now, their revenue comes mainly from selling ginseng domestically.

“He, unfortunately, doesn't see any recovery in the near future,” Mok says. “In his words, ‘the industry has faced punches after punches,’ and the future of the ginseng industry is unclear to him.”