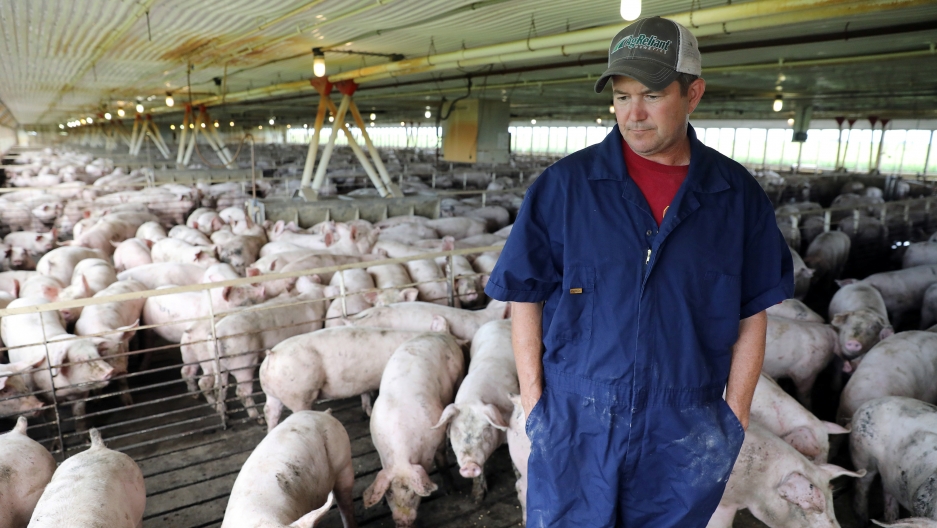 When Dave McNeer opened Sunday’s Des Moines Register and saw a four-page advertising supplement paid for by the Chinese government, he shrugged it off. The ad provided China’s perspective about the ongoing trade war between the US and China.

“I tend to look at those types of ads as just as what they are, they’re an advertisement,” says McNeer, who runs Maxim Advertising in Newton, Iowa. McNeer was also Donald’s Trump’s merchandising man in Iowa during the 2016 campaign.

One of the headlines on one of the ad's "articles" was "Fruit of a president's folly."

The advertisement, labeled as paid for by the “China Daily, and official publication of the People’s Republic of China” is like a 4-page tweet from the Chinese government.

It calls the trade war with Trump the “fruit of a president’s folly.” pic.twitter.com/shDAOZlC3X

McNeer had this to say about China reaching out directly to Iowans: “It does annoy me, it does frustrate me because I think they’re doing it for purely political reasons. They know that President Trump won the election in the Heartland and throughout the middle of the country. And some of his biggest, most ardent supporters are here.”

McNeer says President Trump isn’t the one to blame for escalating trade tensions with China. “I am fine with President Trump sticking to his guns. We’ve been taken advantage of for a long, long, long time and somebody is finally standing up for the US and trying to equalize some trade imbalances.”

But the situation in Iowa right now has many there deeply concerned. The US-China trade war escalated further on Monday when $200 billion in new tariffs on Chinese exports to the US took effect. And China, is again, retaliating with more tariffs of its own on US products.

“Iowans are nervous,” says Joe Murphy, with the Greater Des Moines Partnership, the regional chamber of commerce.  “We’re obviously an agricultural state. We have a significant presence in advanced manufacturing, and our state economy really depends on our ability to have access to those foreign markets.” China paramount among them.

China is targeting exports of US soybeans and pork, two huge commodity exports from Iowa. Overall, the state’s economy could lose between $1.05 billion and $2 billion from the current tariff spats, according to research from Iowa State University, including economist Dave Swenson.

“The ag economy going into this year was expecting an expansion in trade opportunities in soybeans and in pork production to Asia, and everything has been reversed,” says Swenson. “Now they’re looking at a year in which they have drastic reductions in their exports, they have drastic reductions in demand for pork, and those two things put together are seriously undermining their profitability and undermining their sentiment with regards to their trade prospects in the future.”

Swenson says the tariff issue has been front and center for weeks and weeks in Iowa. And he thinks it’s starting to take a toll on President Trump’s base.

“The rock-ribbed, strong sentiment that most of rural Iowa had toward the administration is starting to crack,” he says.

But will China’s advertisement from this weekend speed that up?

“We hosted him on our farm when he came to visit his old friend, then governor, now Ambassador [Terry] Branstad.”

Kimberley, who is also the director of market development for the Iowa Soybean Association, had this reaction when he opened his Sunday paper: “I thought, 'Hmmm, that’s not subtle.' They’re certainly trying to influence people.”

Still, Kimberley doesn’t think the ad will have much impact in Iowa. “I think ultimately people have their minds kind of made up, whether it’s on one side of it or the other side of the issue.”

Kimberley says what will change minds is if the trade war continues.

“It will come down to how long this lasts. If this is protracted, an extended disagreement, the consequences are going to be more severe for Iowa and agriculture in general.”

Kimberley says Iowa farmers sold a lot of their product on contract before the tariffs took effect, but if the spat rolls into next year, then they’ll really be feeling the pain. So, he just wants the two sides to come up with a compromise to end the trade dispute.