Working in the dark with a headlamp, Ivan Ramos inspects a small frog that has black and yellow stripes. Carefully, he stretches its tiny legs to check its bones. Then, he places it in a container lined with cotton and foam, about the size of a hockey puck.

Related: 'Romeo and Juliet' give hope for the Sehuencas water frog

Ramos snaps the container shut before the frog can jump out and puts it in a cooler where dozens of frogs already await export. 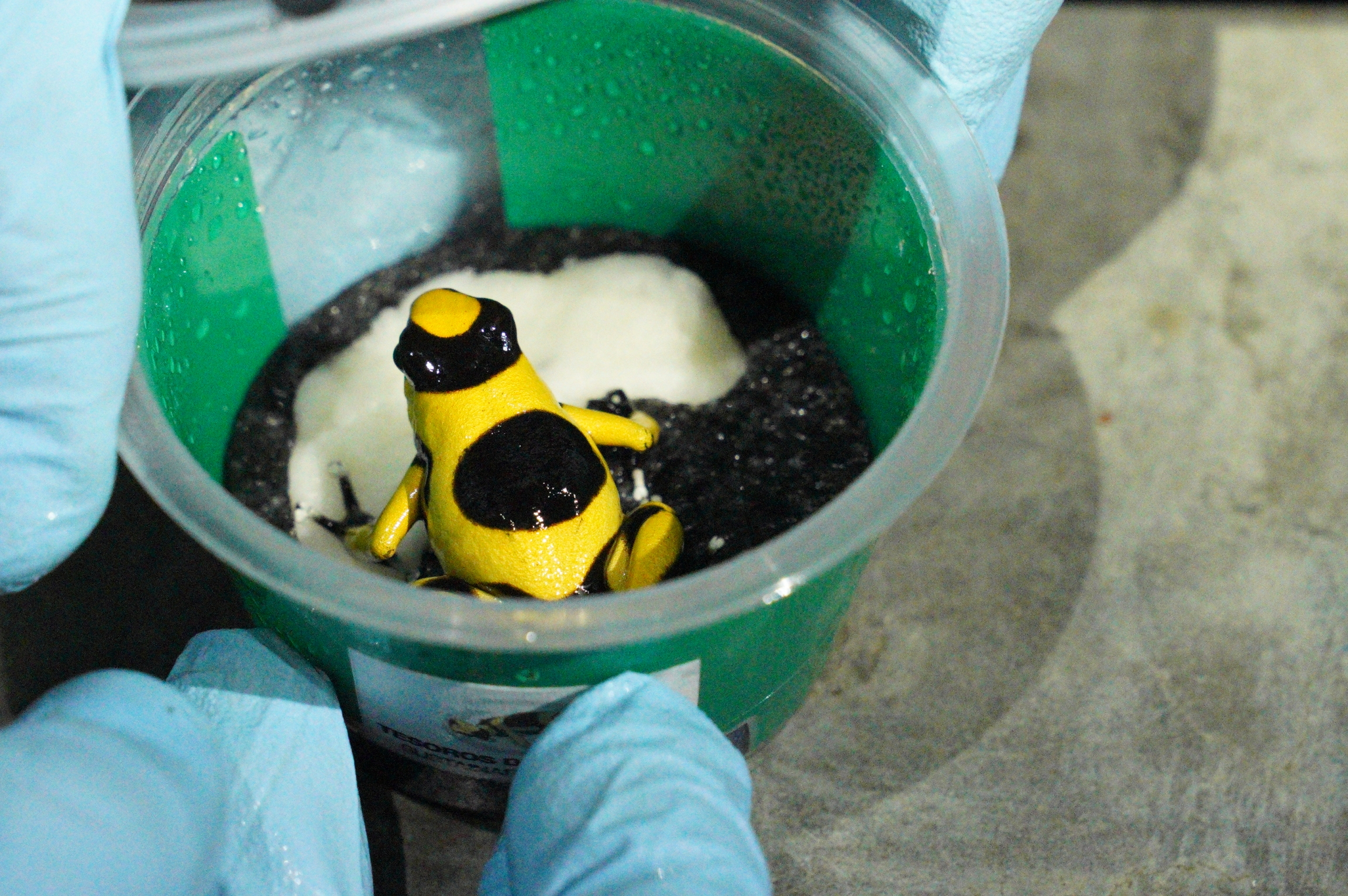 A Lehmann's poison frog, or Oophaga lehmanni, is placed in a container in which it will be taken to Europe. The container is lined with foam and wet cotton, which gives the frog humidity during the journey.

“Today, we are sending 68 animals to Europe,” Ramos explained as he prepared to pack the next amphibian. “They will go to Denmark via Germany.”

Ramos works for Tesoros de Colombia (Treasures of Colombia), a company just outside of Bogotá, the capital, that sells frogs to collectors in Europe and the United States. Their goal is to put poachers out of business.

In hundreds of glass terrariums, the frog farm breeds tiny amphibians — about 2 inches long and native to Colombia’s forests — to export as pets. 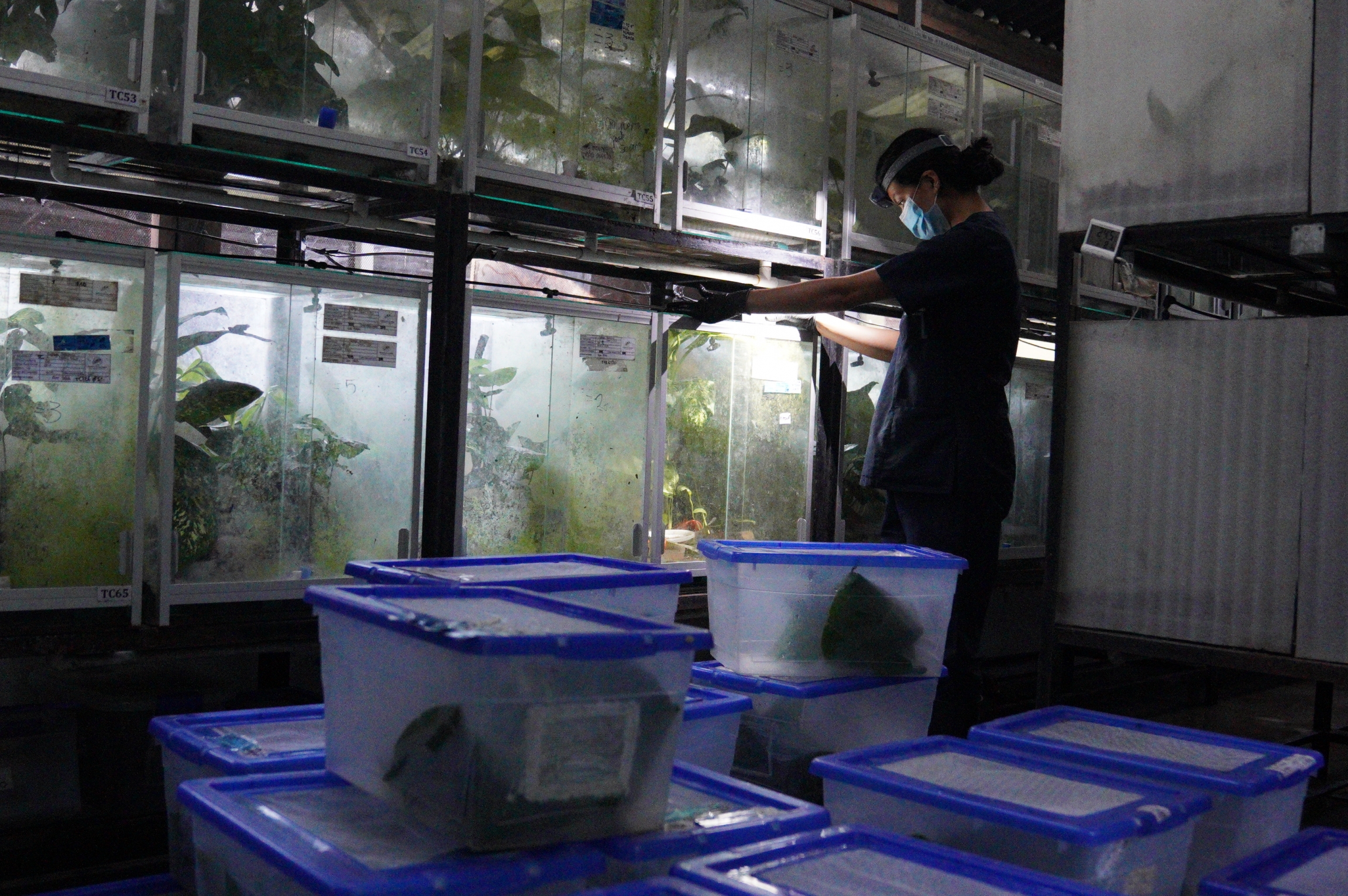 Tesoros breeds frogs in hundreds of glass cases known as terrariums. Each one contains lights that help the frogs to develop and natural plants.

“We are helping the authorities fight animal trafficking.  ... We are giving buyers an alternative to get absolutely legal, healthy captive-bred animals.”

“We are helping the authorities fight animal trafficking,” said Ivan Lozano, the owner. “We are giving buyers an alternative to get absolutely legal, healthy captive-bred animals.”

Colombia is one of the world’s wealthiest countries when it comes to amphibians with more than 800 species. But this natural treasure is also being plundered on a regular basis by animal traffickers, which could endanger the survival of some species.

Every year, police confiscate hundreds of frogs at Colombia’s airports from traffickers who have been known to carry them in their hand luggage and even in small tubes used for film rolls.

A 2020 study said that 80,000 members of one species — the Lehmann’s poison frog — were snatched from their natural habitat over three decades to be sold as pets.

Lozano figured the desire for these colorful animals is insatiable. That’s why he decided to try to supply legal frogs bred in captivity.

“These exotic species are really, really charismatic,” he said at his farm, surrounded by cloud forests. “And it’s really hard to educate a whole planet of people and tell them: ‘Please don’t collect them and keep them in your house.’”

Lozanos’ company has permits from Colombia’s government to breed seven kinds of frogs.

One is the Oophaga histrionica, or harlequin poison frog, with dozens of color combinations including red and black, blue and black and black with orange dots. 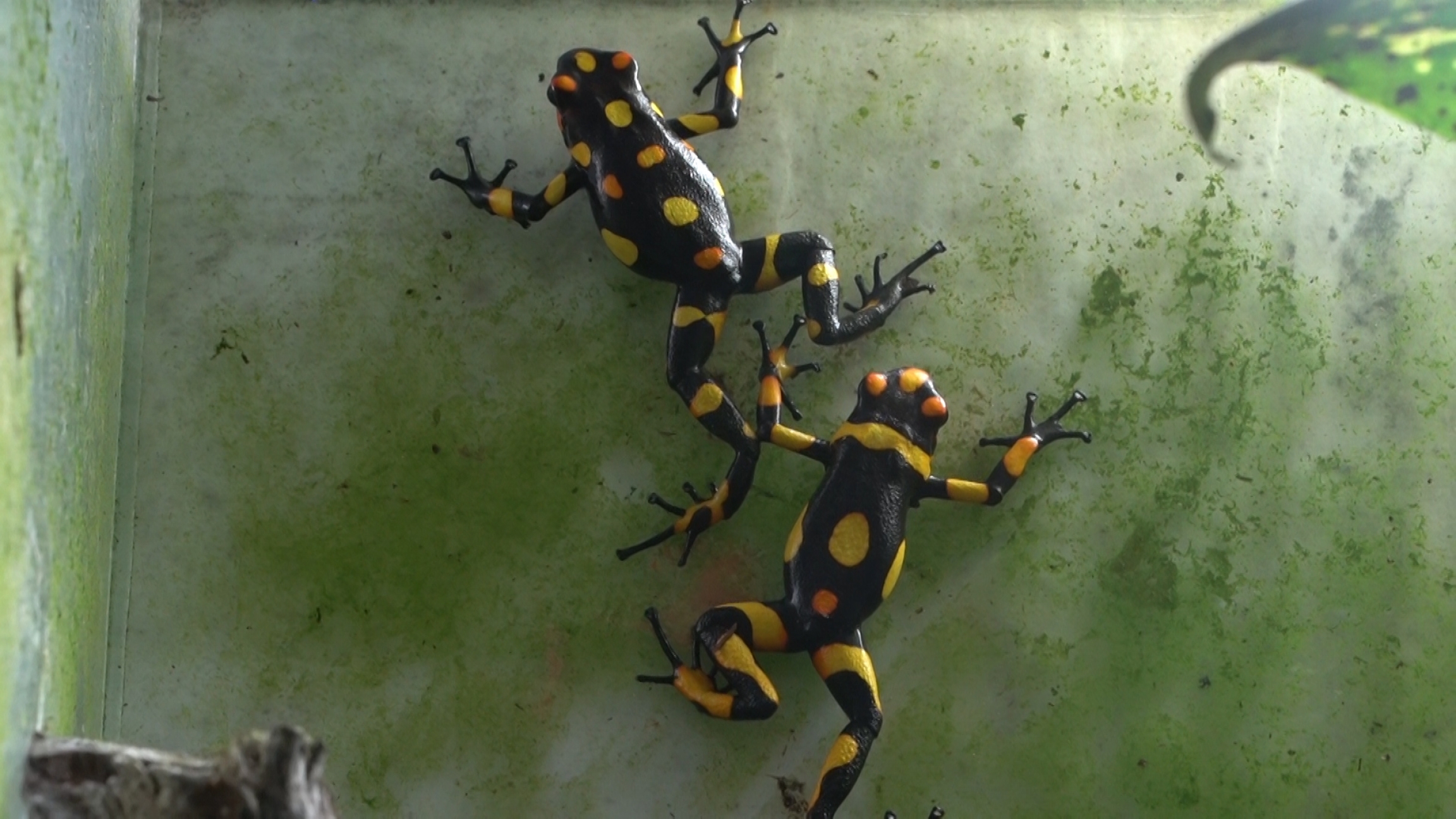 Two harlequin frogs or Oophaga histrionicas, rest at their terrarium at the Tesoros de Colombia frog farm. These frogs come in many patterns and colors including, blue and black, red and black and black with orange and yellow spots.

Tesoros also breeds the endangered Lehmann’s poison frog and Phyllobates bicolor, which makes a loud, creaking cry that sounds like a bird’s song. 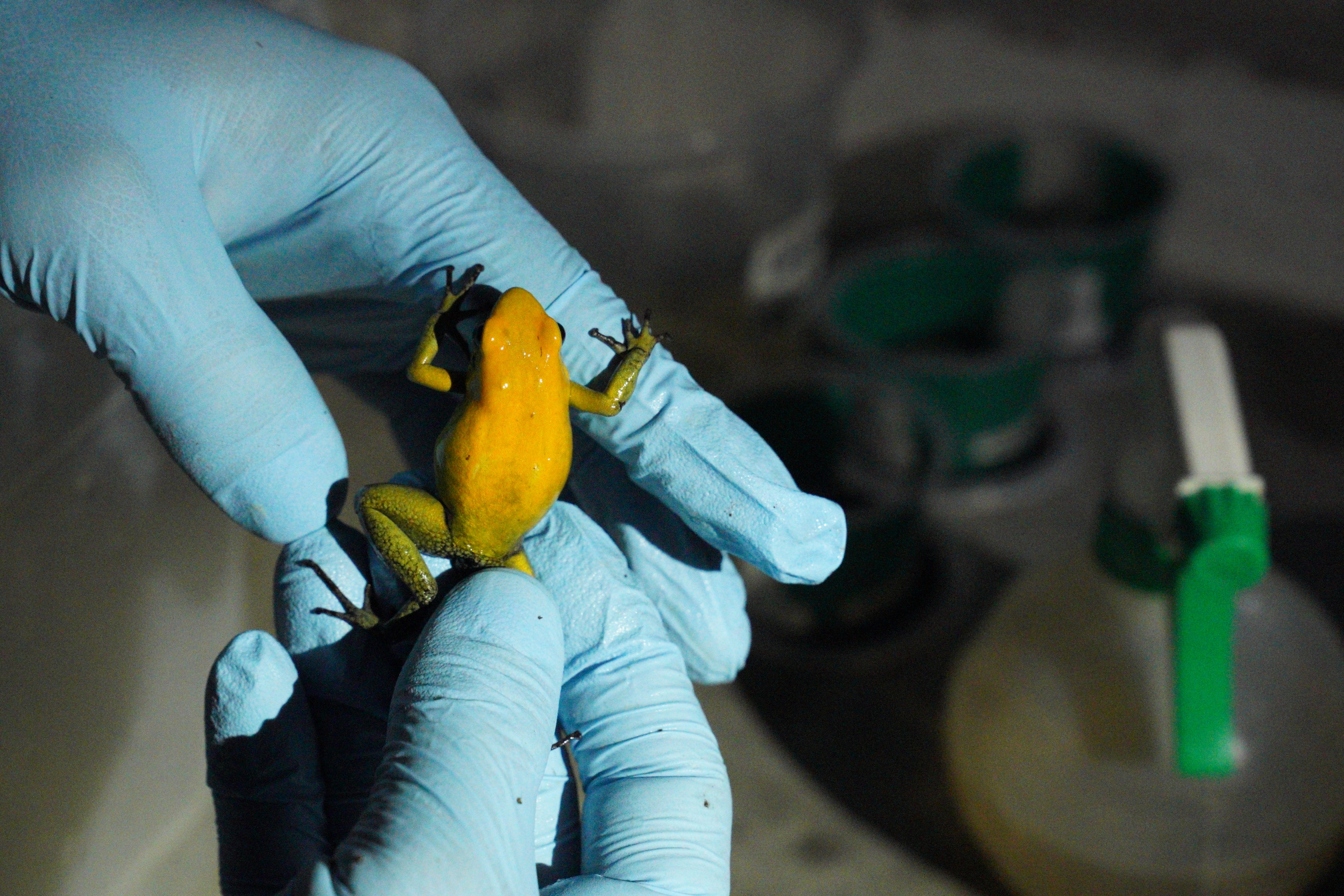 Ivan Ramos inspects a Phyllobates bicolor that is about to be sent to a collector in Europe. The frog was born and raised in captivity.

The demand for these captive-bred varieties appears to be growing in the US.

“Every import we have, I see [client] names that I have not seen before,” said Joshua Stottlemyer, an experienced frog collector in Pennsylvania, who keeps more than 100 amphibians at home.

Stottlemyer helps to handle Tesoros’ frogs when they arrive stateside. He quarantines the animals at his home for two weeks to make sure they are in good health before he ships them to customers across the nation.

“Our first import, there were only a handful of us,” he said. “And this last import, I quarantined — I believe it was 126 histrionicas. So, we went from a couple dozen [frogs] to that large of a number.”

In Indonesia, officials allowed the annual export of 3 million captive-bred geckos each year. But that gave some companies a chance to sell thousands of geckos caught in the wild as if they were captive-bred, said Traffic, an organization that fights against the illegal wildlife trade.

In South Africa, the government allowed owners of game reserves to sell the bones of captive-bred lions to Asian countries that used them for traditional medicine. South African zoologist Laura Tensen said this created a new market for lion bones and gave poachers another incentive to go after wild lions. 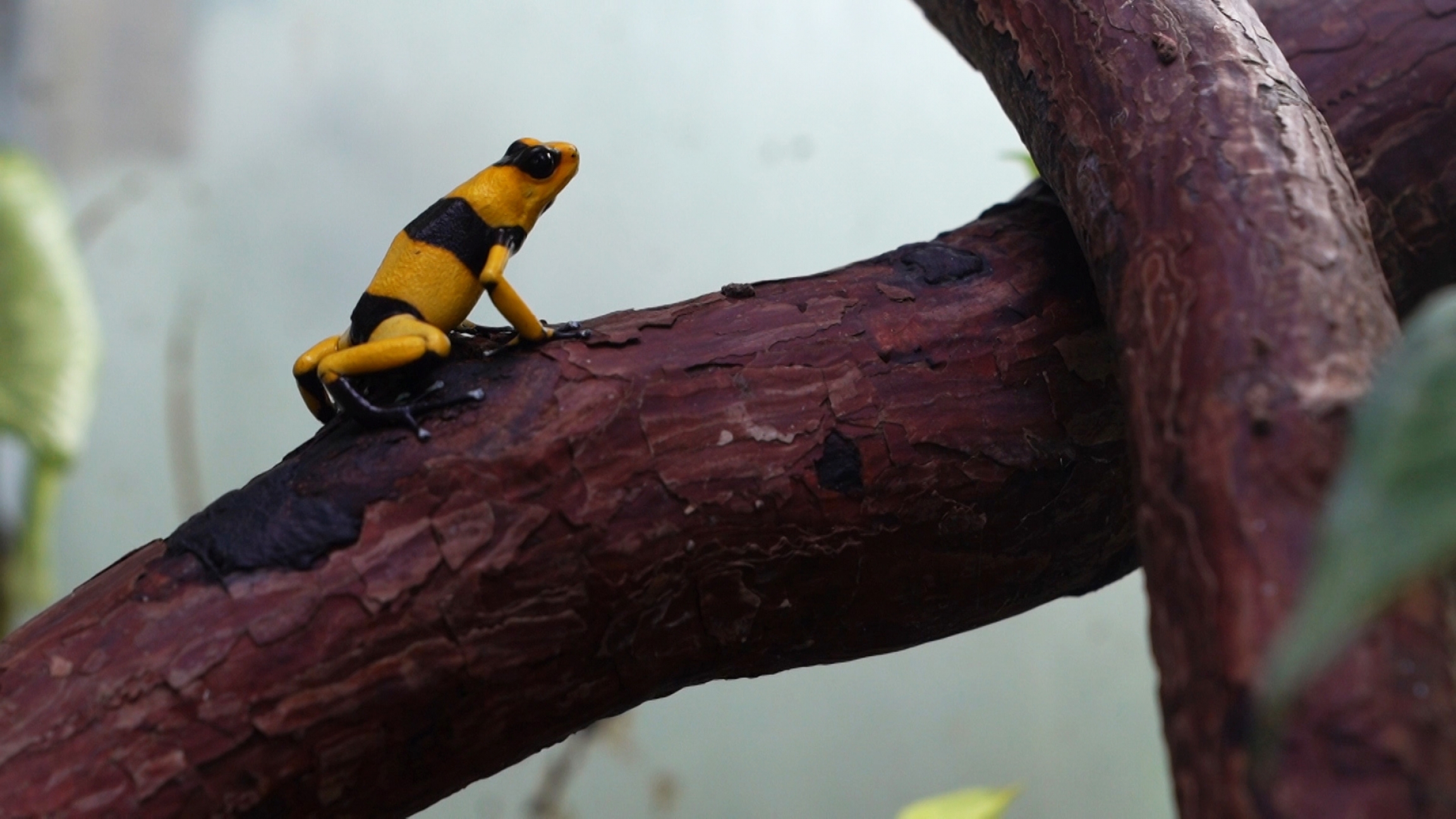 Oophaga lehamnni, also known as the Lehmann's poison frog, is one of the species bred by Tesoros de Colombia.

Tensen said the biggest risk of captive breeding is that it will actually increase the overall demand for exotic animals or their products.

“And as long as there is a demand, people will take specimens from the wild. Because people see an opportunity to make an income."

“And as long as there is a demand, people will take specimens from the wild. Because people see an opportunity to make an income,” Tensen said.

Back in Colombia, Lozano is hoping that frog collectors will be responsible and choose his legally bred specimens over smuggled animals.

In the long term, he plans to use profits from his frog farm to fund projects that will restore the animals’ habitats.

“If you sell a frog and part of the money goes to conservation but also the person that pays gets educated about conservation, I believe it's a win-win situation,” Lozano said.

He hopes the frogs end up “funding” their own conservation programs.