In most Turkish towns, it’s not unusual to see older men climbing up to their pigeon coops after the evening commute.

Most roosts are nestled into the eaves of an apartment building, or tucked in the back behind a family home. These bird enthusiasts like to open the coop doors at the end of the day and let their charges stretch their wings, flying together in a wide arc over the rooftops as the sun sets behind them.

“You need to see them as a piece of yourself. ... Especially during quarantine, we weren’t able to go anywhere… It’s therapeutic.”

“You need to see them as a piece of yourself,” said Yalçın Karcı, who raises a brood of 150 pigeons in a quiet Istanbul suburb alongside his 7-year-old son, Kaman. “Especially during quarantine, we weren’t able to go anywhere ... It’s therapeutic.”

During the pandemic, many have reconnected with new hobbies, from sourdough to houseplants. In Turkey, and elsewhere, the ancient practice of raising pigeons is also seeing a revival.

Related: This is the world's only sourdough library 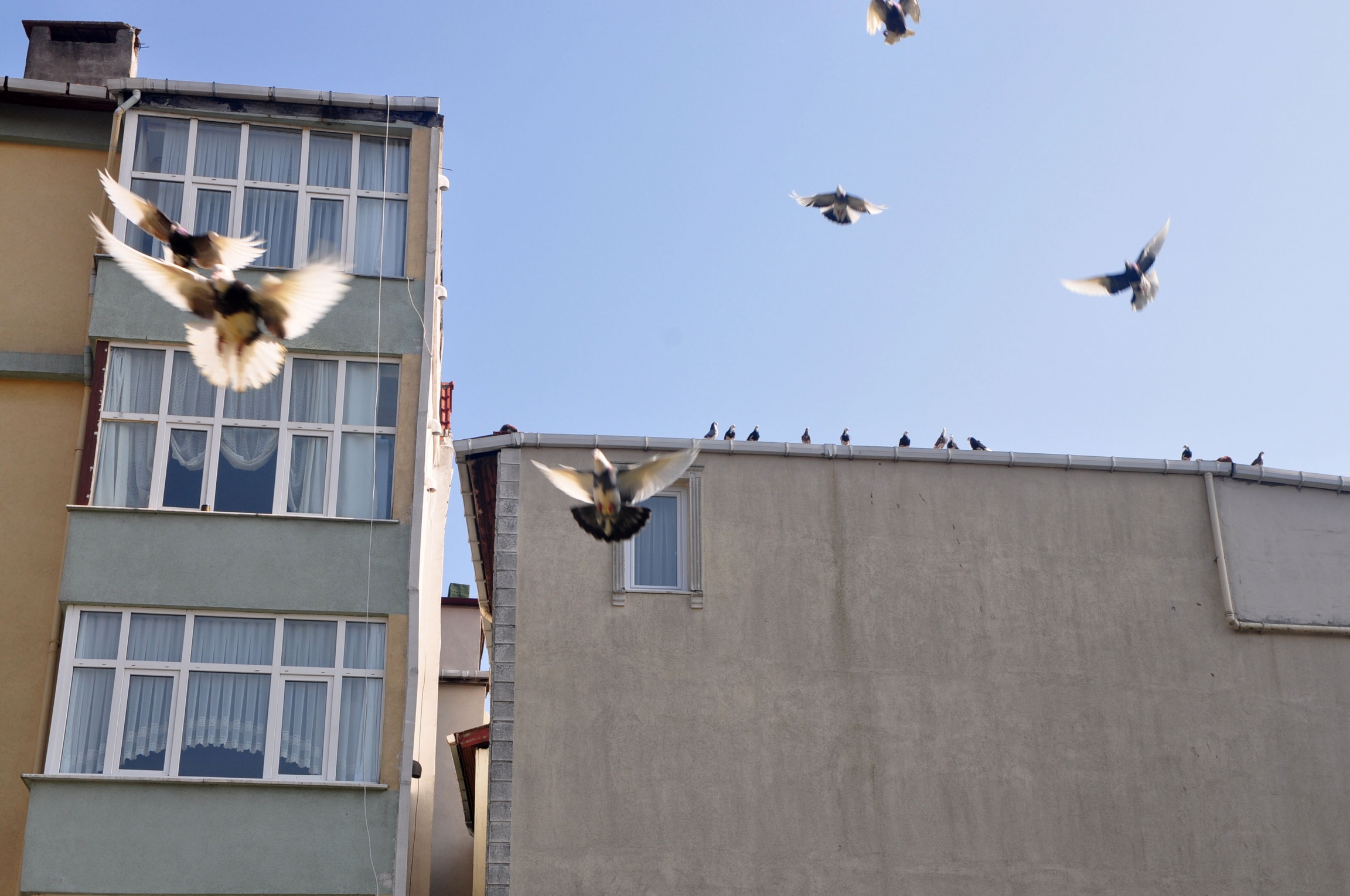 After being startled by an interloping photographer, Karcı’s pigeons return from the neighboring rooftops with promises of treats.

Karcı’s birds are a happy lot, cooing to each other from their nests in a collection of cabinet-style coops on a large, grassy lot in the Tarabya neighborhood.

Over the past year, Turkish children spent months under a curfew that allowed them outside for only a few hours a day. The pigeon lot was a place of refuge for Karcı’s young family, whose apartment overlooks the birds. 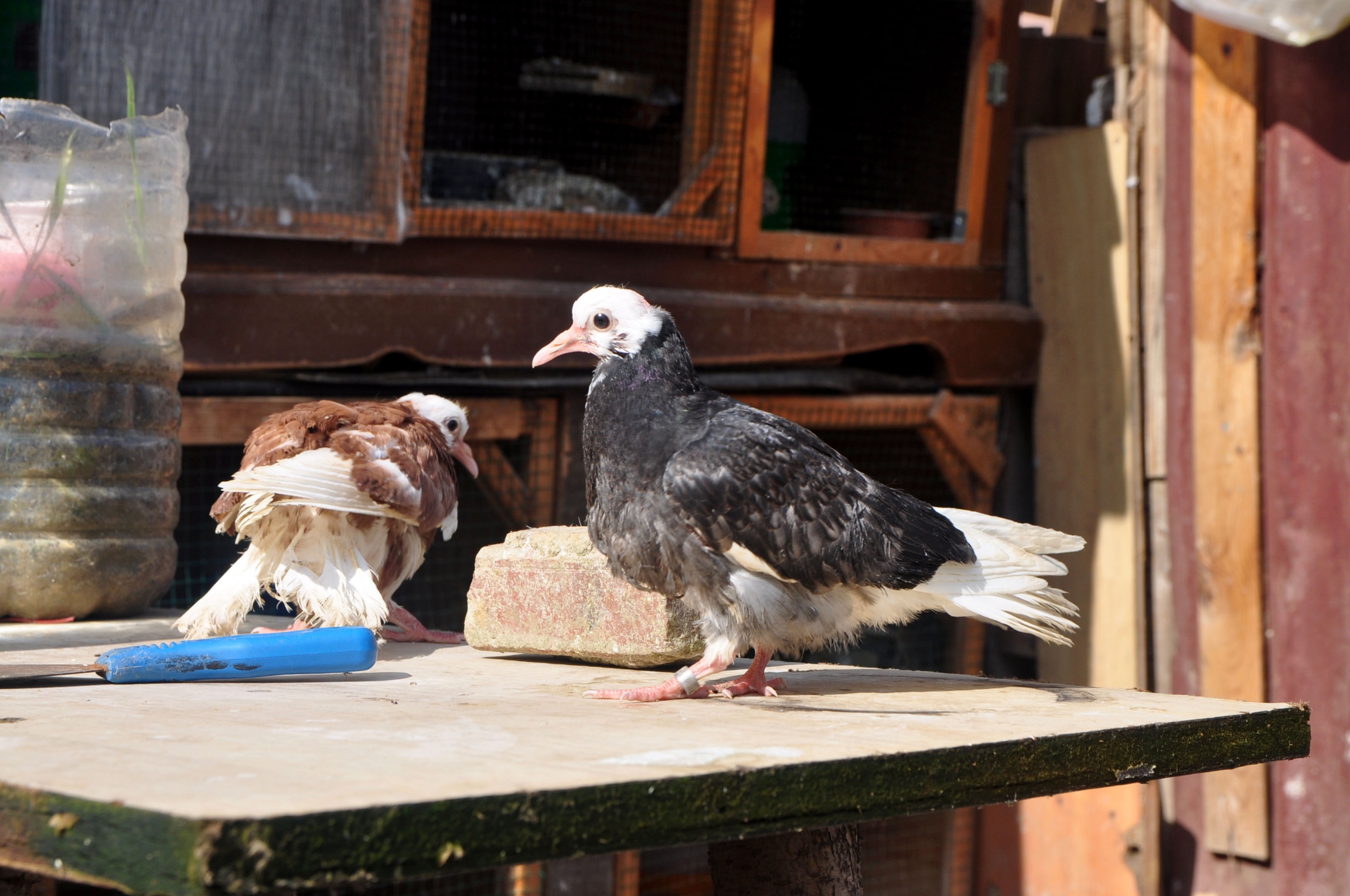 Pigeons are fast growers; these little fliers are just three weeks old. They stay close to the roost, but will soon fly with the rest of the flock.

After feeding the birds a mixture of grain in steel troughs, Karcı shows off two tiny chicks, covered in sparse white, downy fluff and nestled in a bed of dry pine needles.

“They’re three days old!” he said with pride. Their mother, a regal-looking bird with black-and-white plumage, looks on.

Pigeons are thought to be one of the world’s earliest domesticated animals, raised for food and fertilizer as early as 10,000 B.C.E. They appear in Mesopotamian cuneiform tablets and Egyptian hieroglyphics. Pigeons helped early shipbuilders navigate the Mediterranean Sea, and carried messages in wartime across the Central Asian steppes.

Pigeons always fly back to the place they consider home, Karcı said. So, people would bring the birds on long voyages and use them to quickly send messages back. In the ruins of cave cities built by the Hittite and Byzantine occupants of Turkey’s Cappadocia region (in present-day central Turkey), it’s possible to come across the familiar honeycomb patterns of an ancient dovecote.

Karcı has taken care of pigeons since his childhood in the Aegean town of Aydın. He raises a specific breed of pigeon that, today, is somewhat rare: the Selanik Dönek Güvercin. It translates, roughly, to the rolling pigeons of Salonica, the former name of the city of Thessaloniki, Greece. 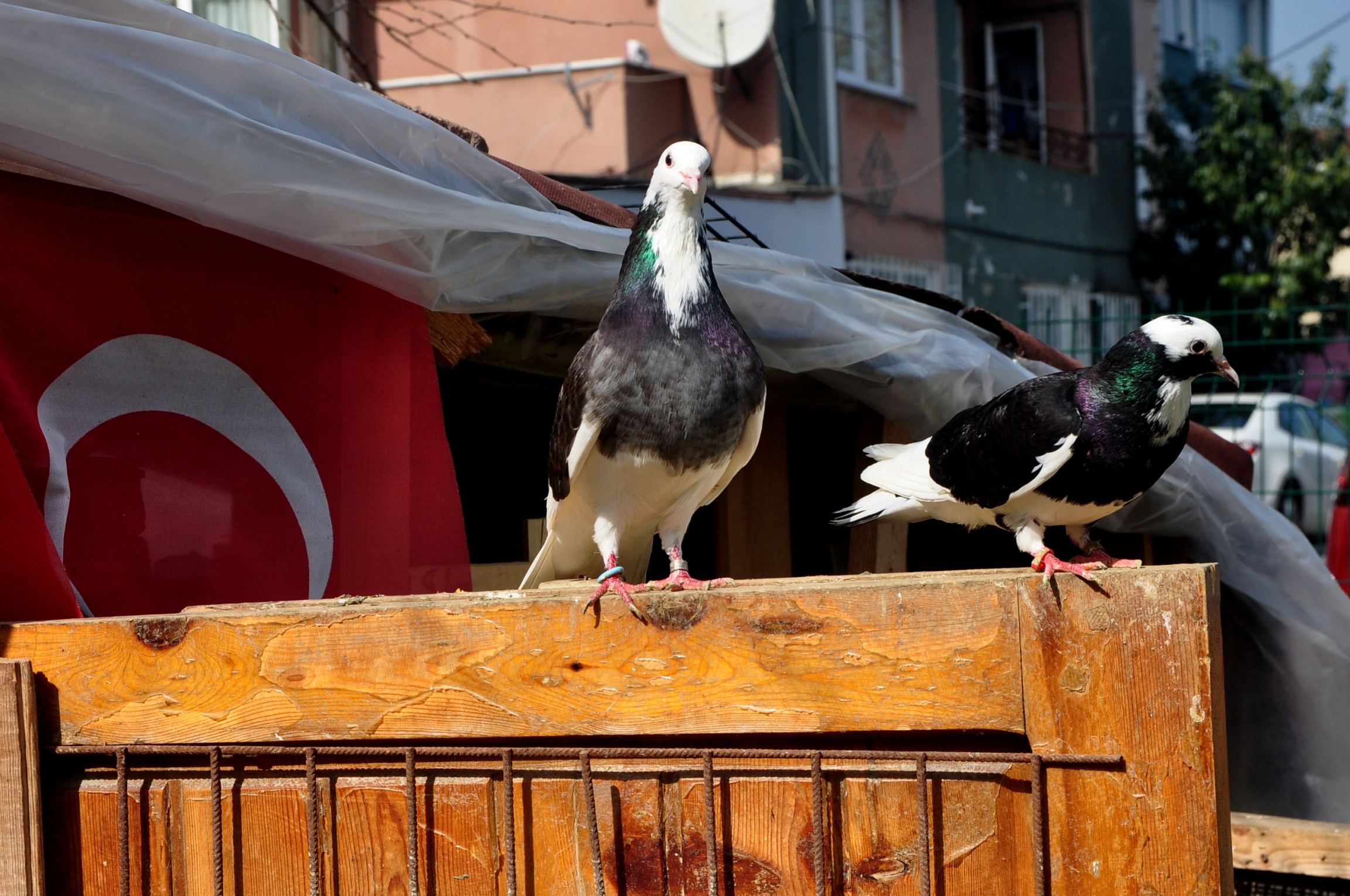 After lunch, a pair of Yalcın Karcı’s pigeons sit and observe the visitors. This breed of pigeon, the Selanik Dönek Güvercin in Turkish, is marked by a jet black torso, white tail feathers, and hues of metallic green and purple. They’re also excellent tricksters, and can be trained to do flips in the air.

These pigeons were brought to Turkey after World War I by Greek Muslims. Hundreds of thousands of residents of the two countries were subject to a population exchange dictated by the Treaty of Lausanne; Christians in Turkey were sent to Greece, while Muslims in Greece moved to Turkey.

The Salonica pigeons, Karcı said, are marked by a white head and tail feathers, and a black torso — but with vivid, metallic hues of green and purple on their neck. From a tall perch on top of an apartment block, they race to the ground as fast as possible, doing somersaults in the air as they gather momentum.

“They start out with the wide flips, and then they start to narrow it down. Then they’re flying like bulls, like the blades of a fan,” Karcı said.

To teach the birds how to do this, Karci keeps another type of “trainer” pigeon. They’re less flashy, Karci explained, but very loyal. They never leave their homes, and they keep the flock together. 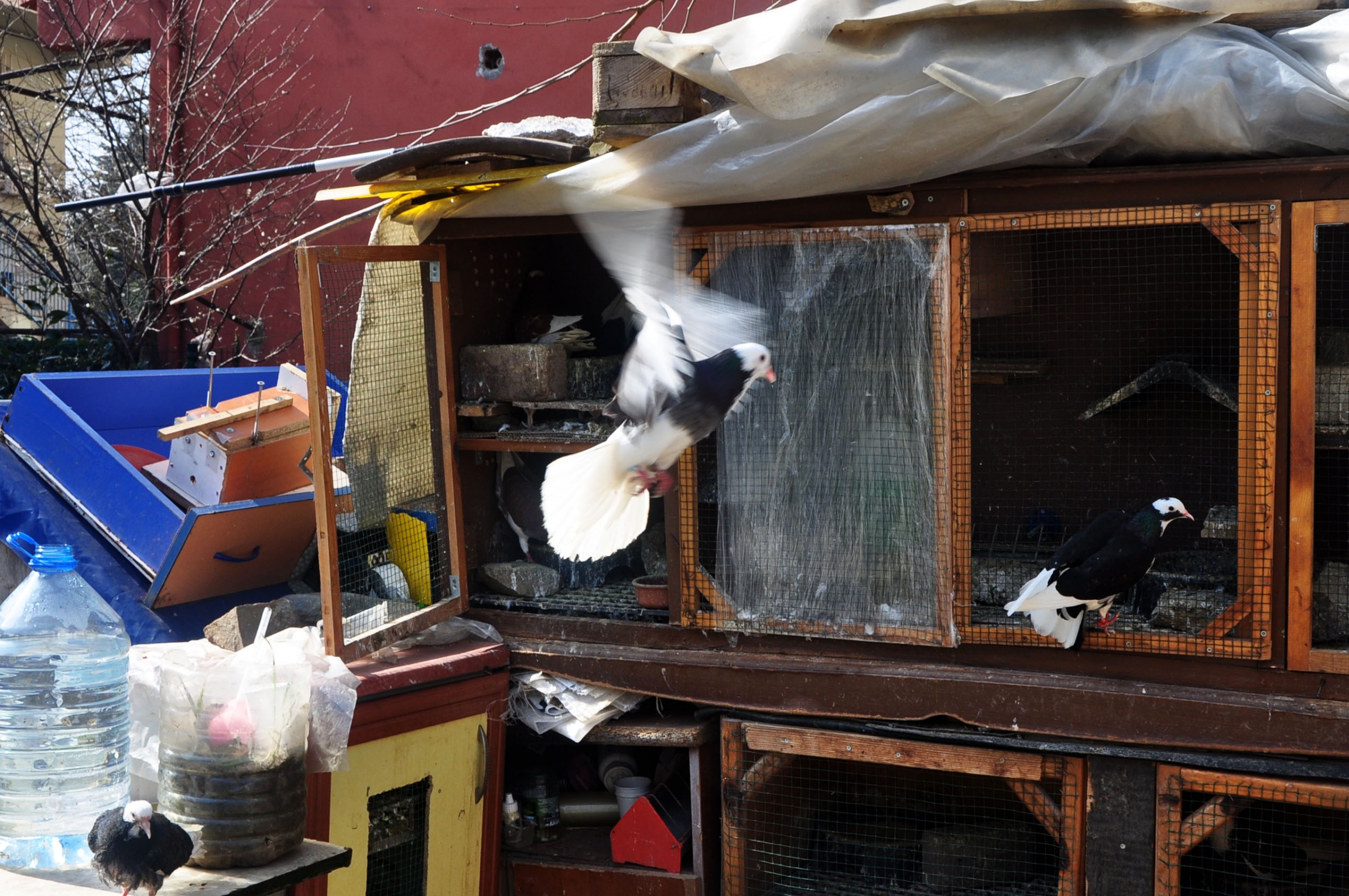 Yalcın Karcı built a coop for his pigeons on an empty lot next to his apartment, in Istanbul’s northern suburb of Tarabya. Karcı estimates he has 150 birds in his care, and he keeps some of the smallest chicks inside his home.

Pigeons are popular in Turkey, as well as in neighboring Iran and Syria. In the southeastern city of Gaziantep, some collectors fasten customized jewelry to their birds.

But their popularity is not limited to the region. Globally, trained pigeons can fetch thousands of dollars on auction sites. Last year, a Belgian racing pigeon was sold to an anonymous Chinese buyer for a record-breaking $1.9 million.

“It’s an aging sport, but we have seen a few more members joining. ... With lockdown, getting a few pigeons and watching them fly about the house is quite an attractive proposition.”

“It’s an aging sport, but we have seen a few more members joining,” said Karen James of the UK-based Royal Pigeons Racing Association. “With lockdown, getting a few pigeons and watching them fly about the house is quite an attractive proposition.”