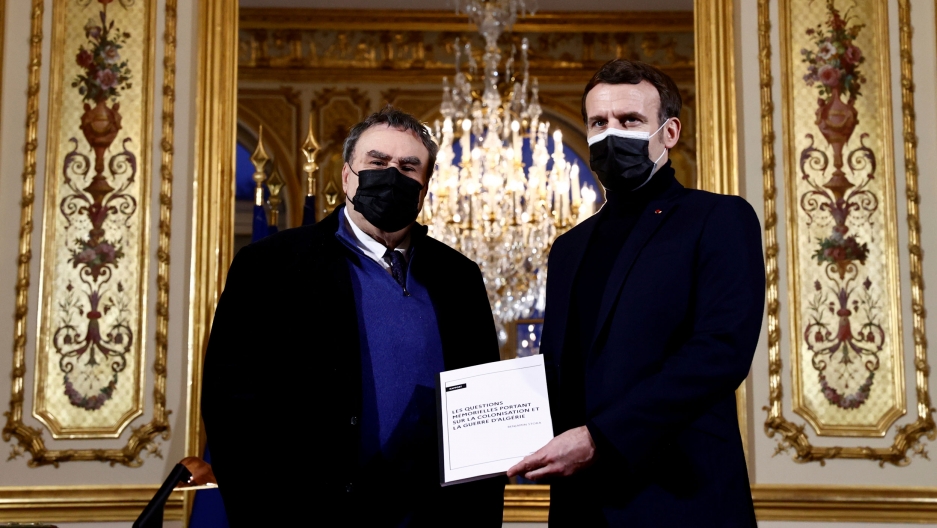 French President Emmanuel Macron, right, receives a report from French historian Benjamin Stora on the memory of the colonization and the Algerian war, Jan. 20, 2021.

Macron met with four grandchildren Boumendjel in an efforts to reconcile France with its colonial past while offering an outstretched hand to Algeria, which France occupied for 132 years.

In a statement late Tuesday, the presidential Elysee Palace said Macron wants to give families of the disappeared on both sides of the Mediterranean "the means to learn the truth."

Macron is the first French president born after the end of Algeria's brutal seven-year war of independence in 1962, and had promised to reckon with colonial-era wrongs and, put an end to the two countries' still rancorous relationship.

Algeria held a special place among France's colonial conquests, becoming part-and-parcel of France like other French regions. While Algerians make up a large portion of immigrants in France, the North African country harbors enmity from the years of colonization that culminated in the war, its brutal secrets locked in archives that Macron said he is gradually trying to reopen.

"No crime, no atrocity committed by anyone during the War of Algeria can be excused or left hidden," the Elysee statement said. "They must be faced with courage and lucidity, with absolute respect for those whose lives were torn apart by them and whose destinies were broken."

France's bid to seek reconciliation is part of a larger movement of reckoning with the dark past of nations, notably in the United States where Civil War-era statues honoring southern heroes who defended slavery are being torn down. Macron has said he is opposed to removing statues to erase history. He has also said he doesn't want to apologize to Algeria — even though he surprised everyone when he said, while campaigning for the presidency he won in 2017, that France's colonization was a "crime against humanity."

A report commissioned by Macron from historian Benjamin Stora, considered France's top expert on Algeria, said the "excesses of a culture of repentance" don't contribute to facing the past. However, Stora also said that healing wounds demands improving understanding of what the colonial system entailed, including its daily reality and ideological goals and "how some in Algeria and France resisted this system of domination."

Among recommendations was recognition of the killing of Boumendjel. His wife Malika had spent a lifetime trying to uncover the truth of her husband's death during the especially brutal Battle of Algiers when, the presidential statement said, "he was arrested by the French army, placed in a secret (location), tortured, then killed on 23 March 1957." It said a French general, Paul Aussaresses, "admitted to have ordered one of his subordinates to kill him and cover the crime as a suicide." Aussaresses was convicted in 2004 of defending torture.

In 2018, Macron formally recognized the responsibility of the French state in the 1957 death of a dissident in Algeria, Maurice Audin, admitting for the first time the military's use of systematic torture during the war.

Macron wants to honor Gisele Halimi, a French feminist who supported Algeria's independence and denounced the use of wartime torture. He hopes to have her reburied at the Pantheon monument in Paris, a resting place for some of France's most distinguished citizens.