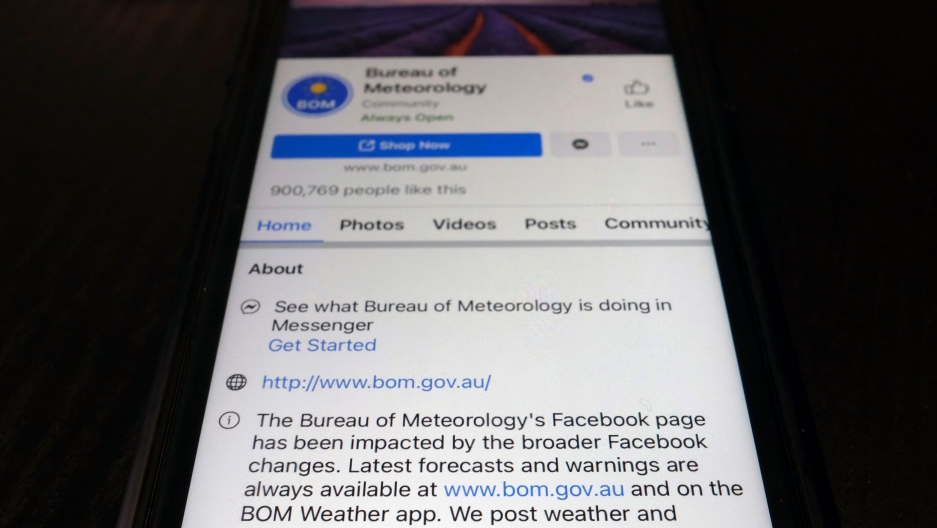 A disclaimer is shown on the bottom of Australia's Bureau of Meteorology page on the Facebook app, Feb. 18, 2021.

If you live in Australia, your Facebook feed looks very different as of Thursday. Tech giant Facebook blocked the viewing and sharing of national or international news on its platform. It preempts a proposed law that would require the company to negotiate compensation deals with media publishers in exchange for showing their content. In addition to the blocking of news from appearing on the platform in Australia, users of the social network elsewhere in the world are now unable to share posts from Australian news outlets.

The groundbreaking legislation being debated in the Australian Parliament, which also targeted Google, involves creating a panel to make the pricing decisions. The laws are expected to pass this week.

Both platforms have condemned new legislation but have now taken different approaches to dealing with it. Google, which threatened to make its search engine unavailable in Australia, struck multimillion-dollar deals to pay for journalism with news organizations including Seven West Media and Rupert Murdoch’s News Corp.

The Australian legislation was drafted in response to demands from content-producing organizations that internet companies should share advertising revenue connected to news reports and other content that appears on their websites or is shared by users. The calls for compensation from news organizations comes after years of downsizing while billions of dollars were made by Google and Facebook in digital advertising.

One student was killed Wednesday by gunmen wearing military uniforms in an attack on a boarding school in Nigeria’s north-central Niger State. Officials say at least 40 other schoolboys, teachers and staff were abducted in the raid. No group has come forward to claim responsibility, but many believe it was one of the increasingly powerful and heavily armed bandit groups in the region.

And, during a high-level meeting of the UN security Council, Secretary-General António Guterres criticized the global distribution of COVID-19 vaccines for being “wildly uneven and unfair.” Guterres warned that 10 countries have administered 75% of all vaccinations. He called for an urgent Global Vaccination Plan to bring together those with power to ensure equitable vaccine distribution. The pandemic has infected more than 110 million people and killed at least 2.4 million.

Is France ‘sleepwalking' into voting for the far-right? 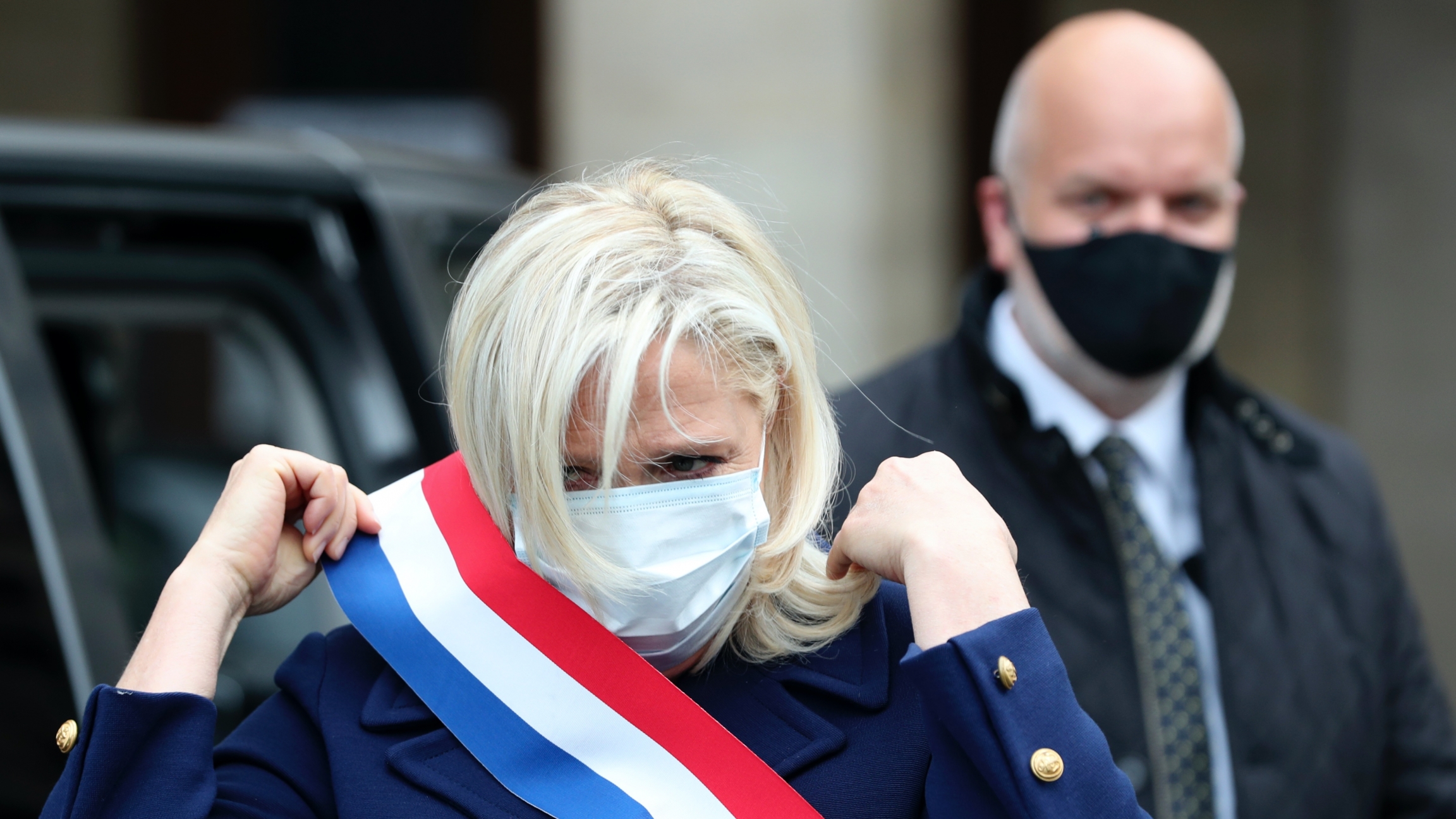 French far-right leader Marine le Pen, wearing a protective face mask, arrives at the statue of Joan of Arc during a ceremony, May 1, 2020, in Paris. Far-right militants usually gather at the statue for their annual May Day march.

As French President Emmanuel Macron faced mounting public anger over the country’s high death toll from the coronavirus, Le Pen appeared to struggle to find her political voice. But, in recent weeks, that’s all changed and the National Rally leader is back in the headlines.

In Myanmar’s uprising, some fight for more than just 'democracy' 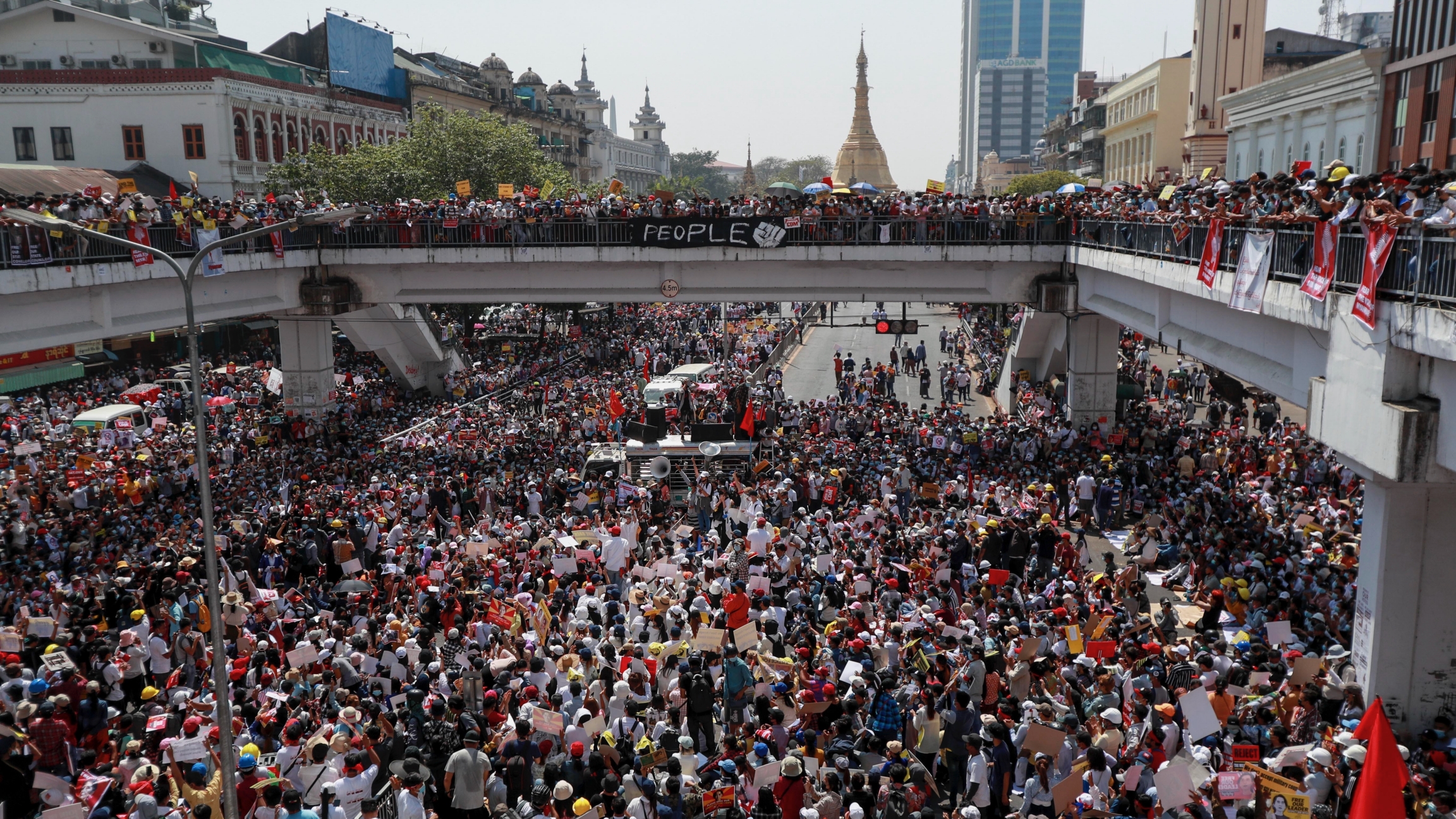 Demonstrators gather in an intersection close to Sule Pagoda to protest against the military coup in Yangon, Myanmar, Feb. 17, 2021. Demonstrators in Myanmar gathered Wednesday in their largest numbers so far to protest the military’s seizure of power, even after a UN human rights expert warned that troops being brought to Yangon and elsewhere could signal the prospect of major violence.

A Feb. 1 army coup voided a five-year experiment in which generals shared power with elected officials, most notably Aung San Suu Kyi, the most famous person from Myanmar.

The generals, most of whom are ethnically Burmese, have immense power but little public support. Their coup has enraged much of the population, from the mountains to the sea.

Nearly a year after WHO declared the coronavirus outbreak a pandemic, travel remains an impossibility. But people around the world are finding escape in their lockdowns (🎧) and closed borders by tuning into different international radio stations. It's all made possible by Radio Garden. 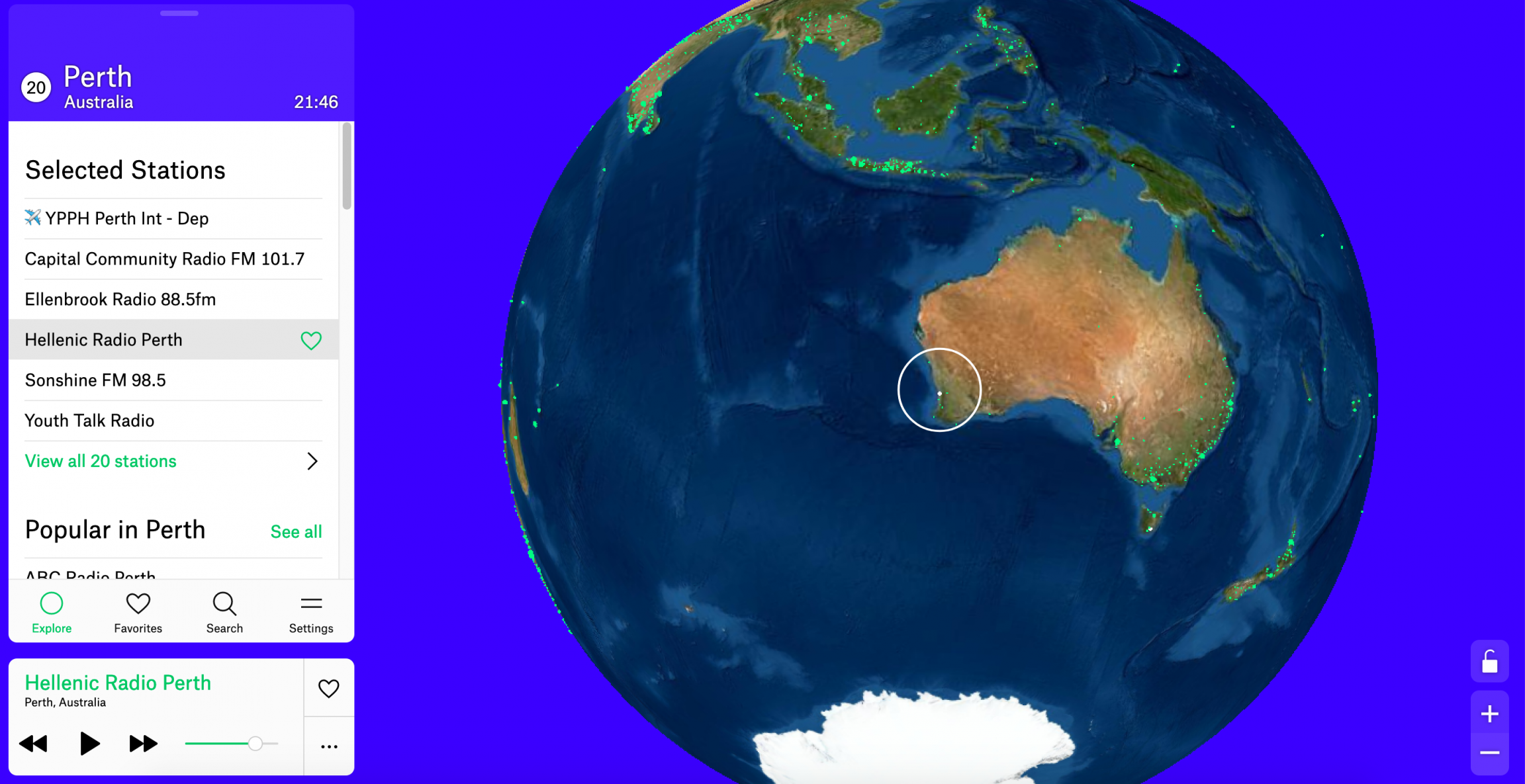 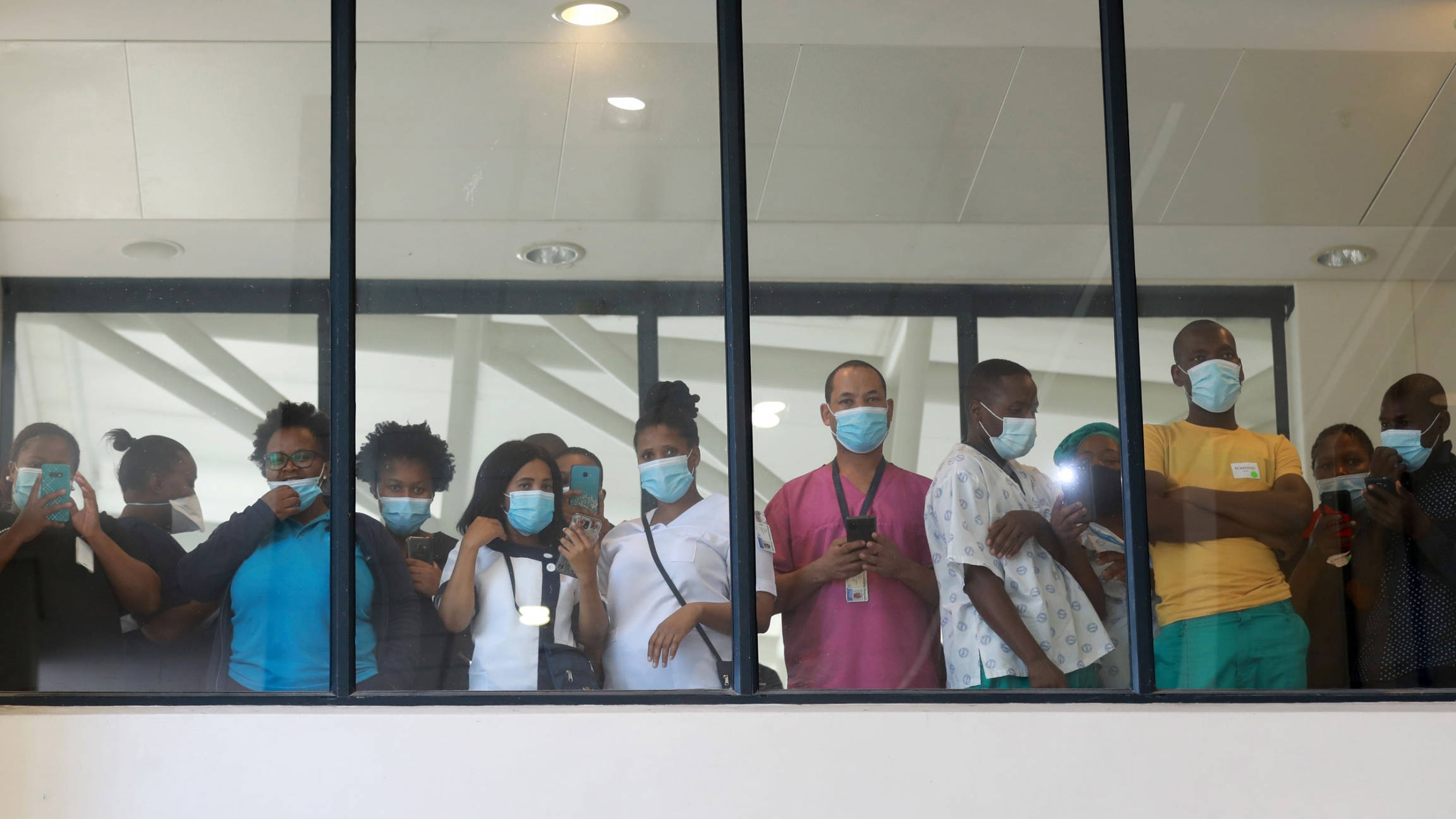 Health care workers look through a window at a hospital in Cape Town, South Africa, during the rollout of the first batch of Johnson and Johnson vaccines in the country.

There were cheers and applause on Wednesday in Johannesburg, South Africa, where the country's first coronavirus vaccines were administered after the country’s national rollout was halted after a complicated and disappointing start. And, the United Kingdom on Wednesday approved the world's first coronavirus human challenge study. Also, Peter Gabriel has re-recorded his classic song “Biko” with help from musicians around the globe to continue raising awareness about racism.