At the Austrian Flachau ski resort about an hour outside of Salzburg, the aprés-ski hut where skiers socialize after a day of skiing remains closed, with chairs stacked and lights out.

On a recent Friday, the normally buzzing ski slopes looked like blank white sheets, with only an occasional skier or snowboarder dotting the runs.

Across most of Europe, ski resorts are shut down. Germany, Italy and France all opted not to open their slopes because of COVID-19. Initially, Austria balked at the idea of shutting down its $18-billion winter tourism season. But that changed as infections spread, and the country closed down hotels and restaurants. Lifts remain open, but only those fortunate enough to live within a day’s drive can enjoy the slopes.

Related: Brazilians flock to the coast during the height of tourist season as coronavirus cases surge 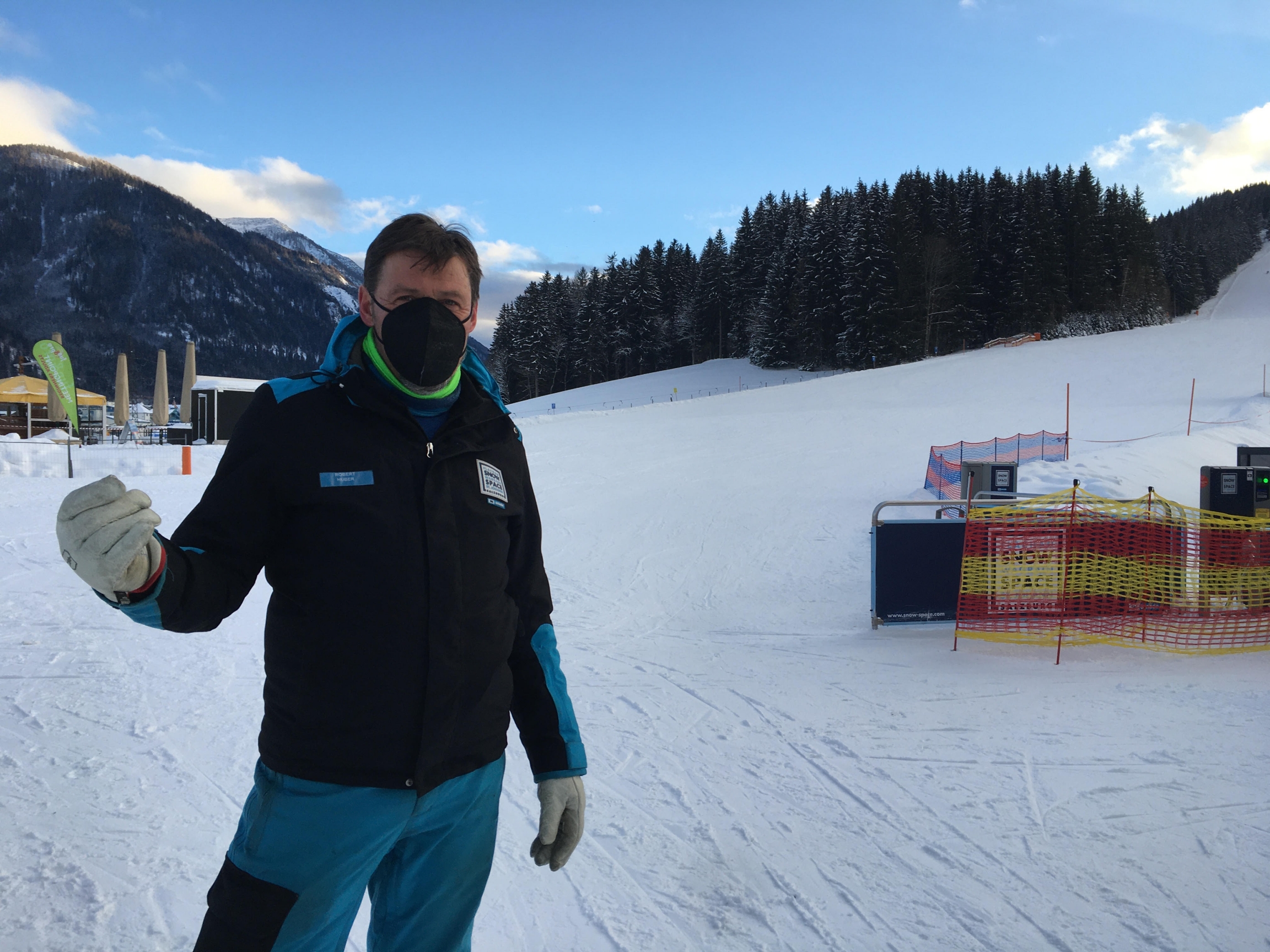 Chair lift operator Robert Huber says the Flachau resort was well-prepared for the season, and it's a pity that so few people can enjoy the sport, fresh air and sunshine.

Ski lift operator Robert Huber watched as one lone skier, wearing a mask, got on the chairlift.

“Everything is wonderfully prepared, but there aren’t any people here. ... It’s a pity. It's beautiful weather. The snow is good. The slope is good, the sun is great.”

“Everything is wonderfully prepared, but there aren’t any people here," he said, shaking his head. “It’s a pity. It's beautiful weather. The snow is good. The slope is good, the sun is great.”

Austrian ski hills close to big cities are still seeing lots of skiers, and in some cases have actually been criticized for crowding. Winter tourism destinations have been especially scrutinized after Ischgl, an Austrian ski resort with a vibrant aprés-ski reputation, became a hot spot for the coronavirus last year and was blamed for the wider spread of infections across Europe.

But today, most of the resorts in the Austrian Alps are hours away from Vienna or other big cities. And even though Germany is relatively close by, travelers can’t just cross the border and ski for a day because of quarantine requirements. An estimated 7 million Germans typically cross the border to ski in Austria in the winter, so the loss is huge for alpine communities.

On top of that, Huber thinks city dwellers are missing out on a vital part of Austrian winter culture.

“I think that it’s also very important for people who live in the city, who may only see fog or only buildings in front of them,” Huber said. “At some point, they have to come out, to move physically and be in the sun in the fresh air, because otherwise, people get crazy stupid.”

A short drive away from Flachau, a little medieval town called Radstadt is feeling the effects of the prolonged closures. Austria has been partially or completely locked down since mid-November.

“It's more like a ghost town,” said Christian Koblinger, head of the tourism office in Radstadt. “The winter is typically pretty busy. We have people mostly from Germany and Austria and the Netherlands, and right now, we don't have any guests.”

The Austrian government is providing some financial aid to businesses hobbled by the shutdown. Koblinger says that help doesn’t cover all the losses.

“It's devastating,” Koblinger said. “We relied on tourism for the last 40, 50 years. So, we can't change that in a heartbeat.” 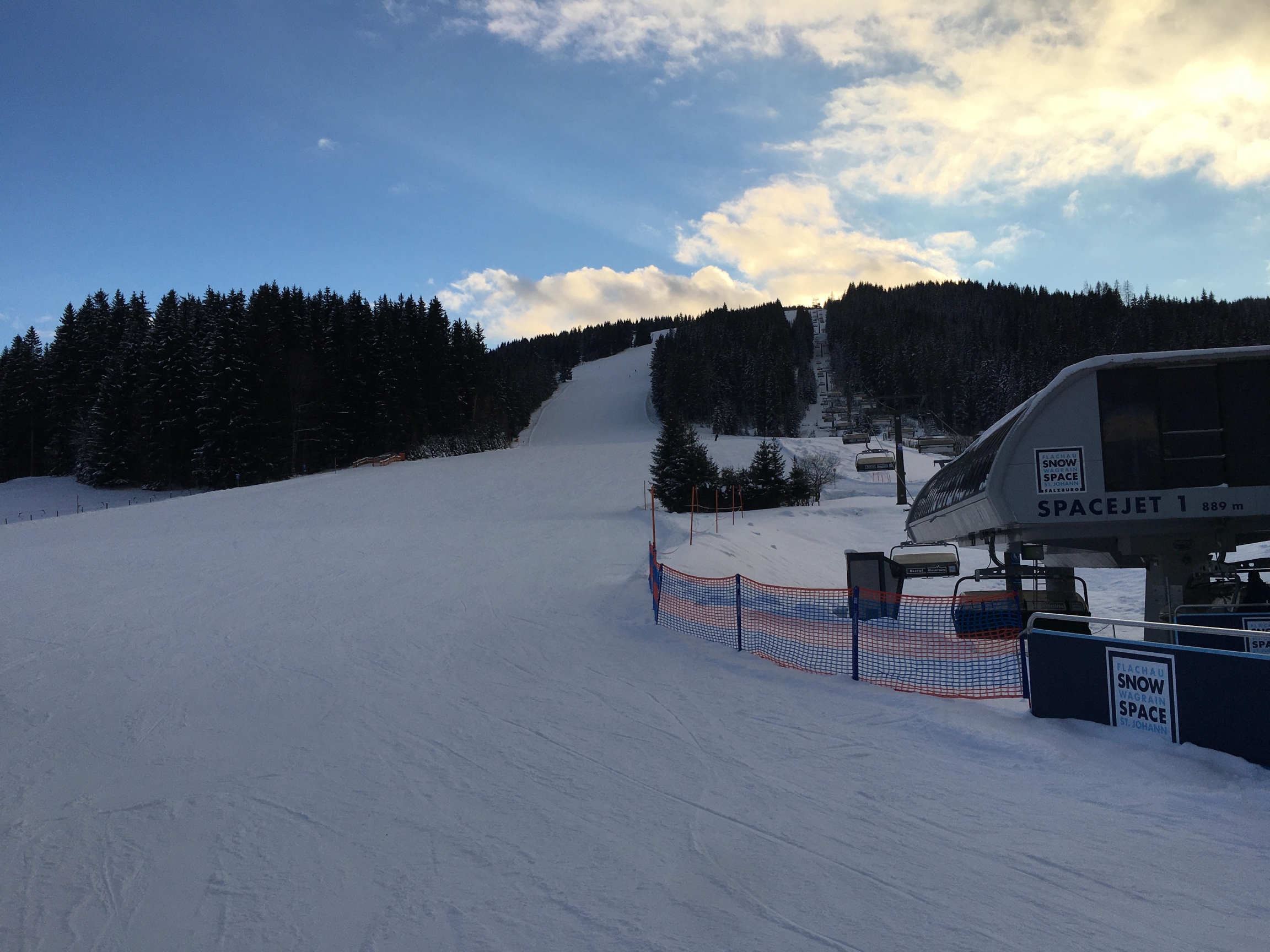 Ski slopes in Austria are technically open, but with hotels and restaurants closed, only locals can make day trips to many resorts in Austria's western Alps.

In the meantime, the skiers and snowboarders who can get to the ski hill and home in a day enjoy a rare experience of solitude in resorts that are normally packed. Skiers must wear masks on lifts, and seating is limited inside gondolas.

Martina Leitner skied at Flachau with her 8-year-old daughter on a recent bluebird day, a term enjoyed by skiers to describe clear-blue skies.

While Leitner enjoyed the solitude and the lack of lines at the chairlift, she also said it’s bittersweet to ski like this. Resorts can’t operate without more skiers and snowboarders to pay for lift tickets.

“Every year, it couldn't be like that because otherwise, we wouldn't have that many lift stations and everything else because it's just not affordable,” Leitner said.

Even though it’s nice to experience solitude at a resort that’s usually packed, Leitner said, she’s looking forward to next winter and welcoming tourists to Austria once again.