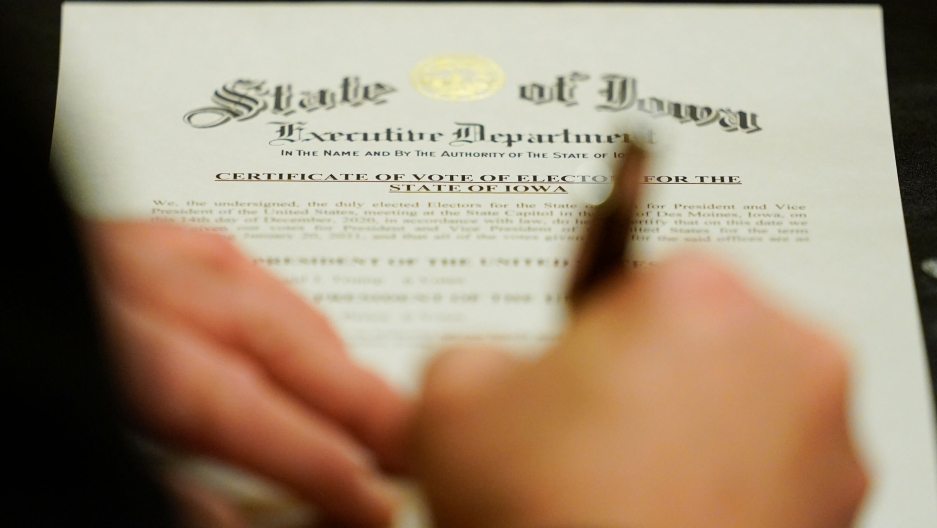 A member of Iowa's Electoral College signs the Certificate of Vote of Electors for the State of Iowa at the Statehouse in Des Moines, Iowa, Dec. 14, 2020.

As expected, the US Electoral College has officially confirmed Joe Biden as the country’s next president, ratifying the former vice president’s Nov. 3 election victory in a rejection of outgoing President Donald Trump’s refusal to concede his defeat. Biden comes away with a decisive win of the popular vote by more than 7 million, and 306 electoral votes — the same tally Trump accrued four years ago when he took the White House.

As electors met Monday to cast their paper ballots — a day marked by the US passing a grim milestone of 300,000 deaths from COVID-19, with America accounting for nearly one out of five confirmed virus deaths worldwide — there was more security than usual, in addition to pandemic precautions that included masks and social distancing. The results are sent to Washington and formally counted at a joint session of Congress on Jan. 6, presided by outgoing Vice President Mike Pence.

“Once again in America, the rule of law, our Constitution, and the will of the people have prevailed. Our democracy — pushed, tested, threatened — proved to be resilient, true, and strong,” Biden said in an evening speech emphasizing the fact that 81 million people voted for him.

Russian President Vladimir Putin called Tuesday to congratulate Biden on his win. Putin said, “Russian-American cooperation based on the principles of equality and mutual respect would meet the interests of people in both countries as well as the entire international community." The congratulatory telegram also came as US security officials are working to understand the extent of a monthslong cyberespionage attack believed to have the hallmarks of Russia that now includes the departments of the Treasury, Commerce, Homeland Security, State and the National Institutes of Health.

The US has begun to roll out the COVID-19 vaccine across the country — with Sandra Lindsay, a nurse at Long Island Jewish Medical Center in New York, given the first Pfizer-BioNTech shot as part of the nationwide effort. The coronavirus pandemic has killed 300,000 people in the US — equal to a 9/11 attack every day for more than 100 days — and has exacted a disproportionate toll on racial minorities. But deployment of the vaccine will take many months. Meanwhile, in Germany, where residents are still waiting on vaccine approval, new vaccination centers are being built in a week to prepare for mass inoculation.

And, while vaccine campaigns have already begun elsewhere in the West, including the UK and Canada, much of the developing world will have to wait much longer for the COVAX initiative to materialize. Just a small fraction of the 2 billion vaccines that the World Health Organization hopes to acquire have actually been secured. COVAX has yet to confirm any deals, and the effort, backed by vaccine alliance GAVI, and global anti-epidemic coalition CEPI, is running low on cash. The likelihood of poorer countries having the same access to vaccines as people in more affluent countries remains low. 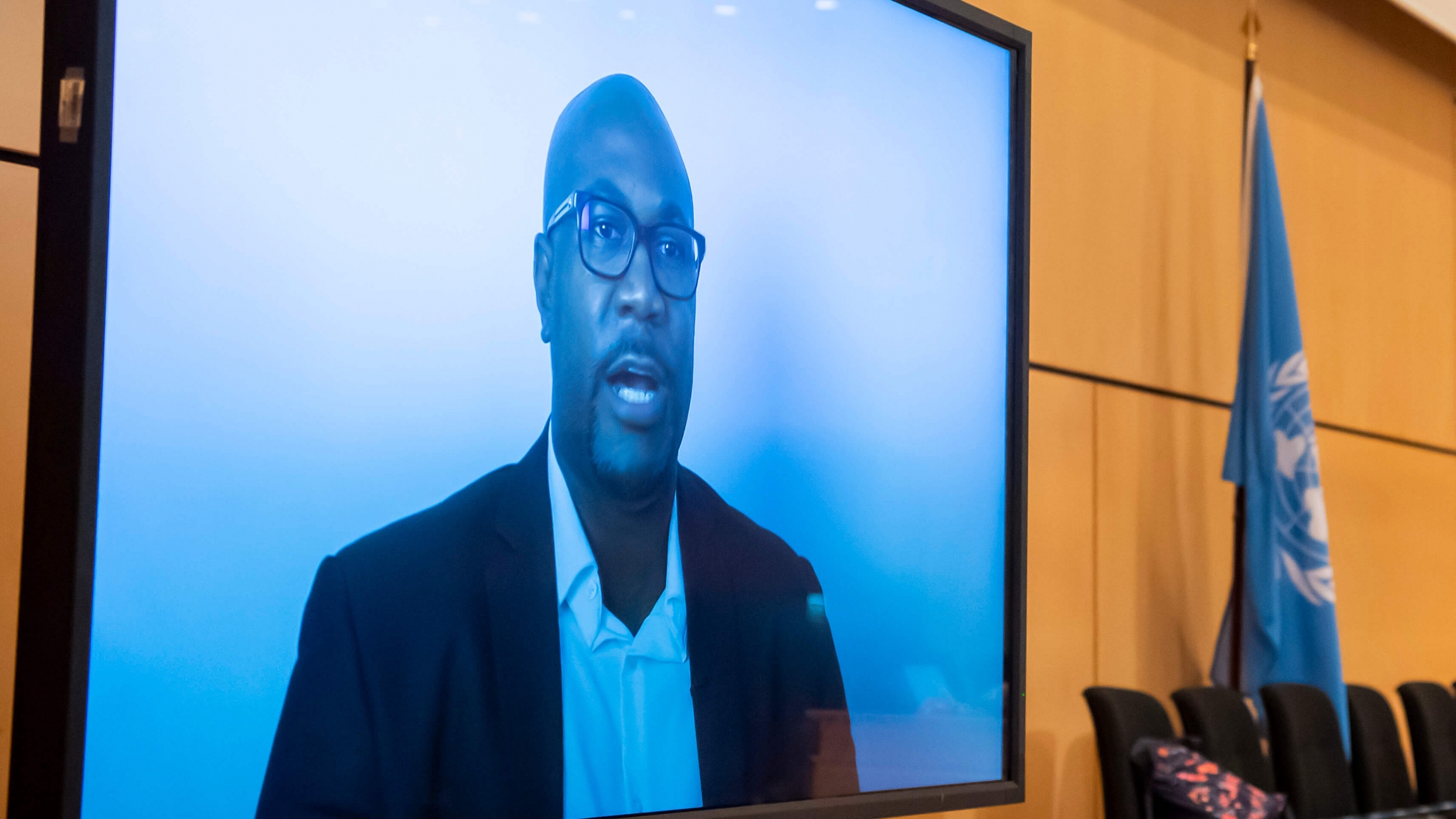 It’s been more than six months since George Floyd's killing by police on May 25 sparked worldwide protests, and led the United Nations Human Rights Council to consider creating a commission to investigate police violence in the US.

That didn’t happen, but the international network of lawyers and activists who feel such an inquiry is needed didn’t give up. 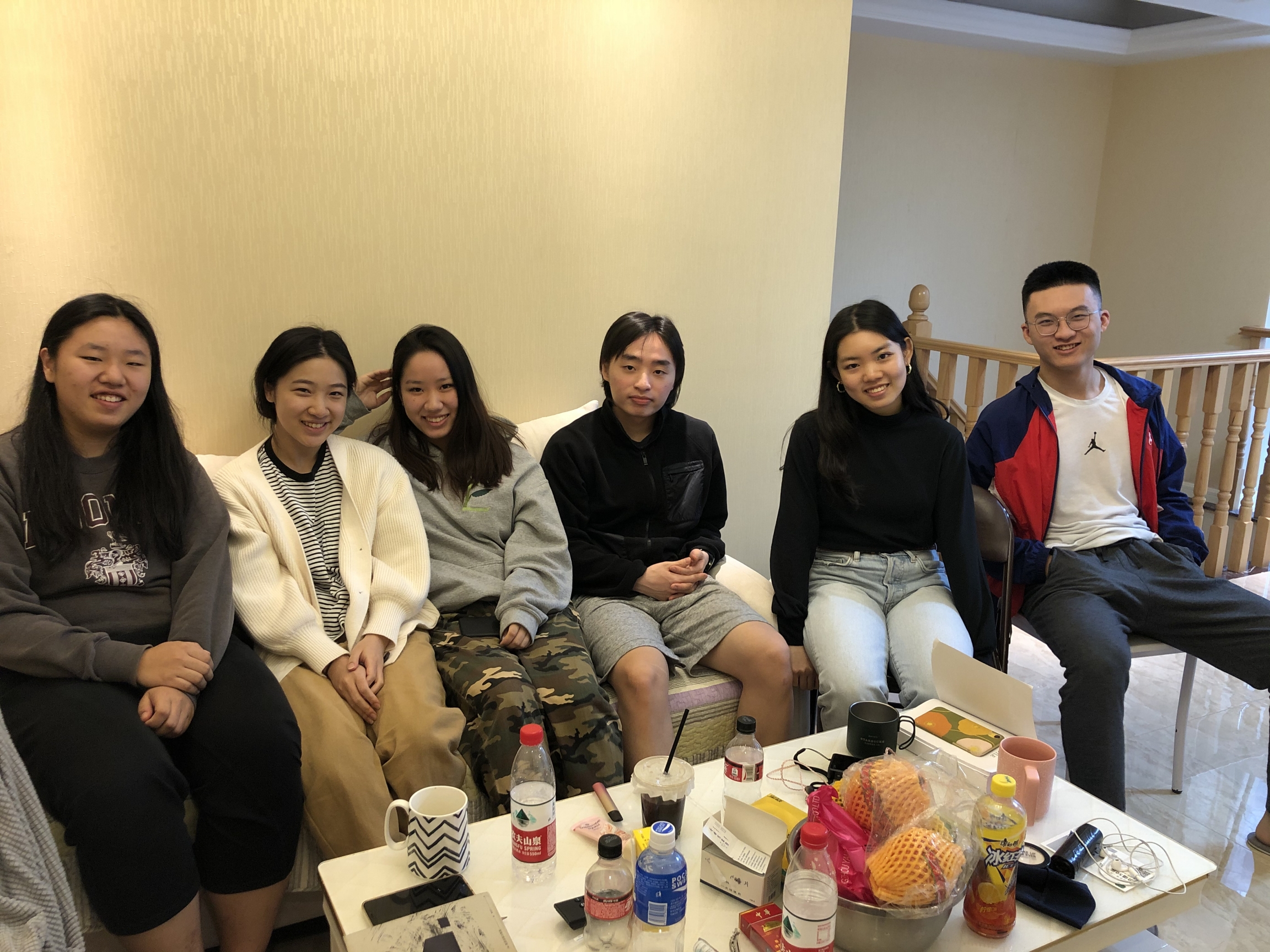 Emily Mao, second from left, joined a co-living community of students in Hangzhou, China, who are studying online — often overnight — at US and Canada-based colleges and universities.

Remote learning has been hard for millions of students worldwide, but for those stuck in China, half a world away from school in the US and Canada, the time zone differences and isolation have taken an added toll.

For the last seven years, Leah Weiss has been working as a medical clown at Sha’arei Tzedek Hospital in Jerusalem. Most of her work is with children in the pediatric ward. But when the hospital opened a COVID-19 ward back in March, she knew that the clown within her could help patients — no matter their ages.

“Wherever she's needed, that's where she goes, and I felt that we're very needed there,” Leah says. 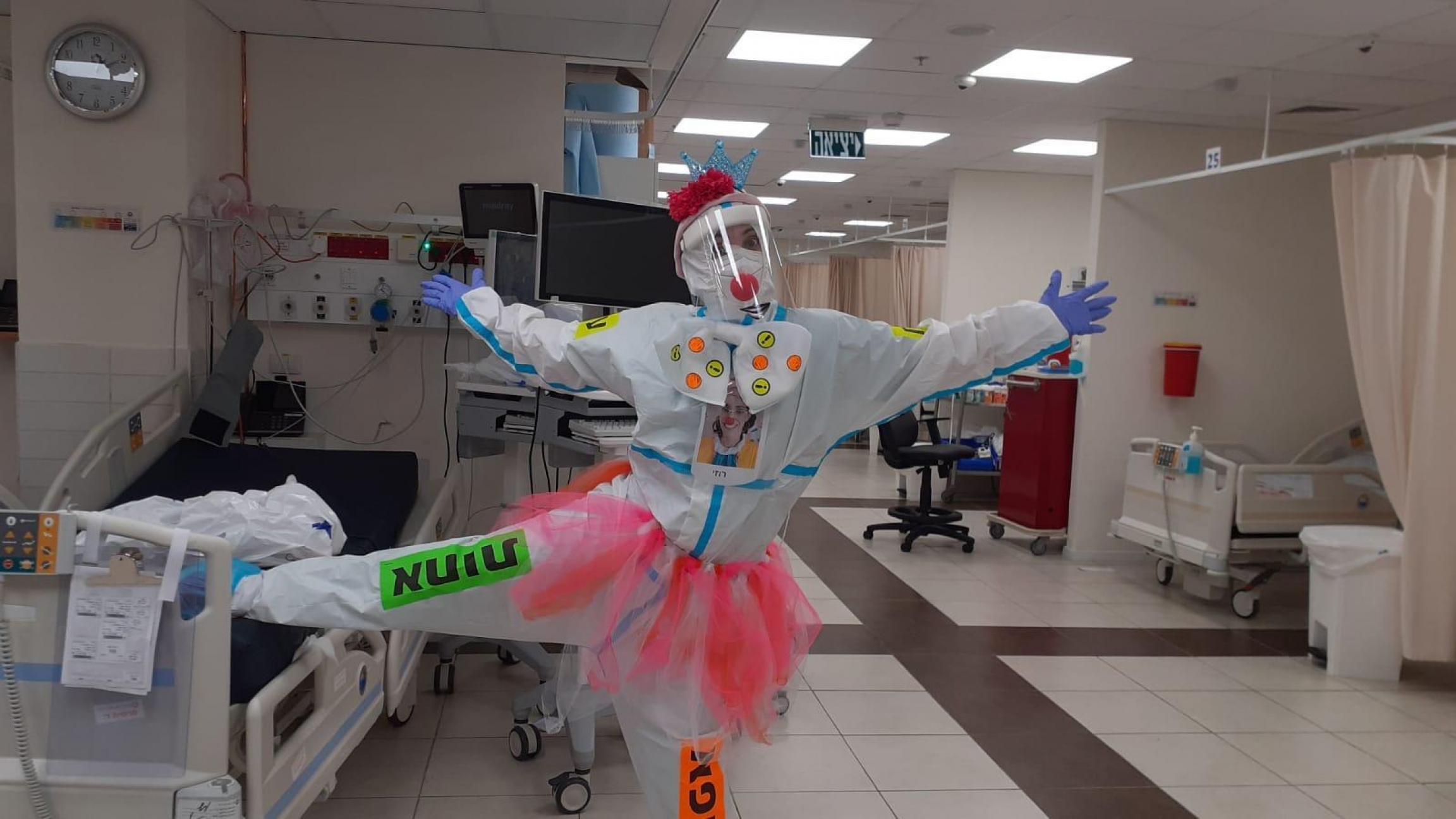 Leah Weiss, who is also a medial clown named Rosie, has been working in the COVID-19 ward of a Jerusalem hospital most of this year. 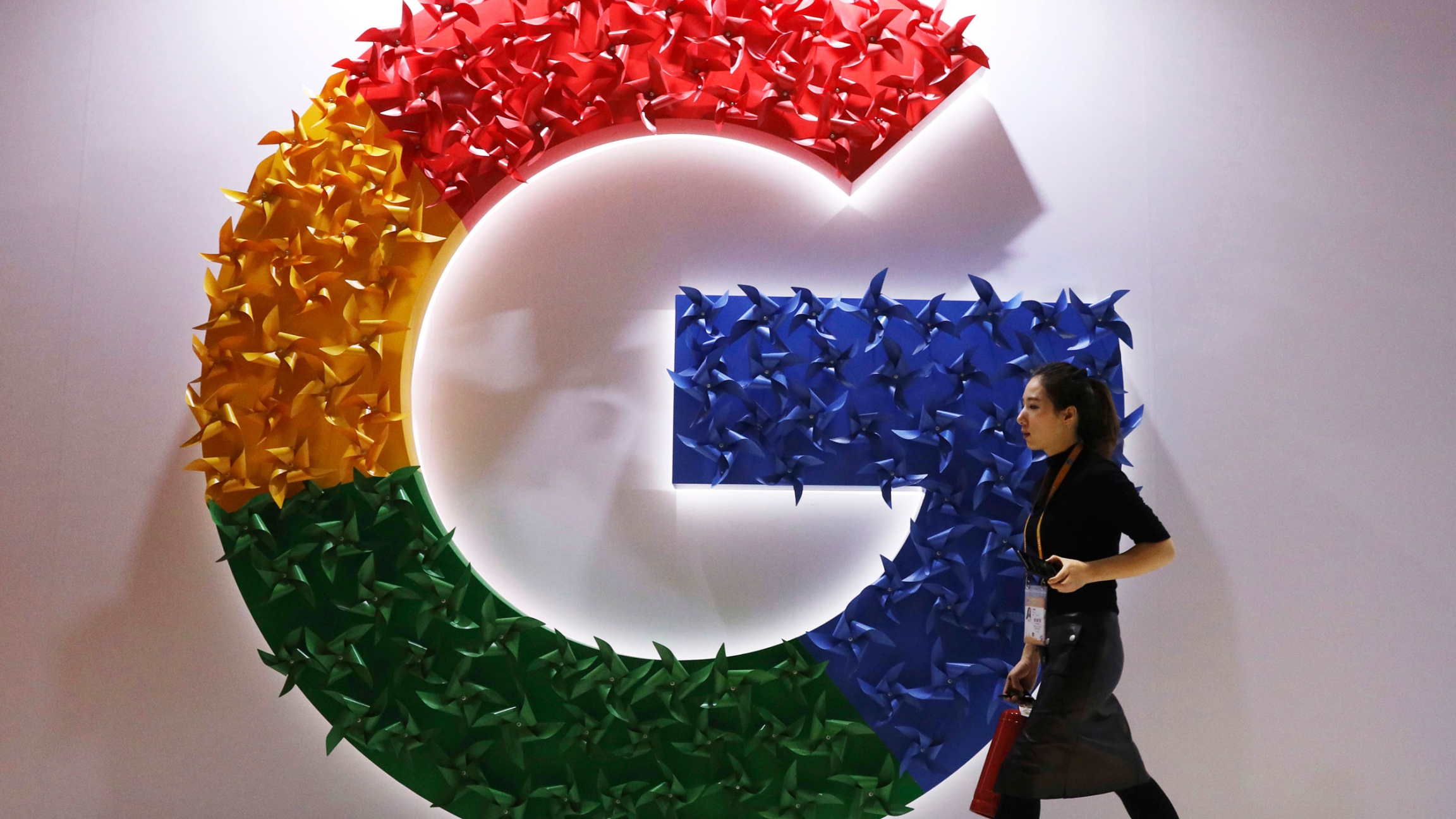 A woman walks past the logo for Google at the China International Import Expo.

The European Commission is gearing up to unveil a set of major proposals aimed at reining in big online platforms and marking the first big overhaul of the European Union’s internet rules in decades. And, it's been almost four full years since the start of Brexit negotiations between the United Kingdom and EU. But, the ending of the saga remains uncertain. Also, Franco Belgian cellist Camille Thomas is performing solo at some of Paris' most striking, and currently empty, art venues during France's second COVID-19 lockdown.