Here is something that's really great about 2020: Chess is now super cool.

"The Queen's Gambit" has become a worldwide hit on Netflix. The story follows the character of Beth Harmon, an orphan who becomes a chess prodigy.

The series has earned widespread praise for its authentic portrayal of the game. In part, that can be attributed to none other than Garry Kasparov.

The Russian grandmaster and former world chess champion dominated international play for two decades and was a chess consultant for the Netflix series. He joined The World’s host Marco Werman to discuss the show.

Marco Werman: Really great to have you with us to talk about this wonderful TV series, "The Queen's Gambit." As a chess consultant, what did that entail? What was your job?

Garry Kasparov: First, you know, we had to separate our functions with Bruce Pandolfini [another chess consultant working on the show]. I asked Bruce what he generally thought about America and chess. At early games, Beth Harmon played in Kentucky and at some national tournaments. But I concentrated on making sure that the games were shown at a higher level. So the top events — American National Championship, and of course the games with the Soviet players — had to be perfect quality representations. Not just some positions on the chessboard, but real games. Because I knew that many of these games would not be shown in their entirety, players — even chess amateurs — would be able to look at the positions and identify whether it's serious or not.

And I came up with a collection of games that were based on real games, but also added some of the continuations that were analyzed with a computer to make these games real, top, professional games. I also wanted to bring them as close as possible to the book description [from the 1983 novel published by Walter Tevis]. And I think it worked out, especially the last game. I was quite proud that I developed a new game based on one of the professional games played in 1993 between two top players, Vasyl Ivanchuk from Ukraine and American champion Patrick Wolff. And actually, Patrick immediately wrote me a message after the show was released saying, 'Oh, I recognize the game.' He wanted to make sure that the story in the book was properly reflected on the chessboard.

So, now that the series is out and you've seen it, do the chess matches feel real to you on screen? Or is there still something kind of uncannily not there?

I know that you cannot get 100% perfection because I'm talking about actors. They had to pretend that they are playing chess, but it's not about me or any top professionals. It's about the general public. The public believes it was real, and it was as close as one can get in a Hollywood production.

But it's not just the way they sat at the chessboard, the way they played the game. It's also the atmosphere surrounding the chess matches, because she faced Soviet champions, the Soviets who dominated the game. I thought it would be very important to show the difference between American individualism and the Soviet teamwork. And eventually, at the end, she actually succeeded in beating Borgov in the adjourned game — receiving very valuable advice from New York City, from her American friends and colleagues. 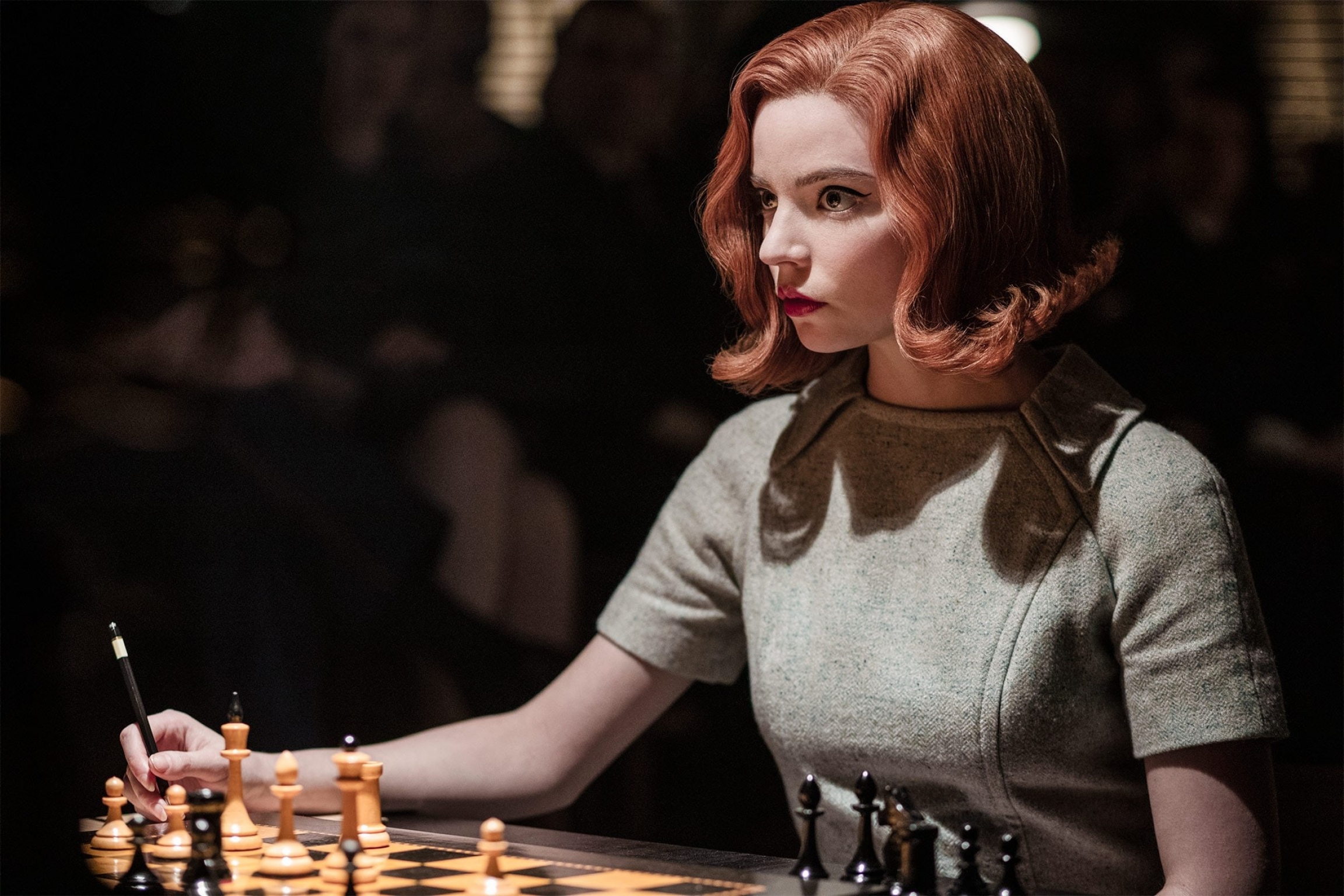 The show has inspired a new generation of chess players worldwide, as people remain indoors and glued to their streaming devices during the pandemic.

It's interesting you mention that because this is something that really emerges in the series, these kind of two different approaches to chess. Benny, another chess prodigy, describes the Soviet players in the show: "You know why they're the best players in the world? They have the best suits? Because they played together as a team. Especially during adjournment. They help each other out, and as Americans, we work alone. Because we're all such individualists, we don't like to let anyone help us."The point that Benny is making there to Beth is that the Soviets are very team-oriented. When a match takes a pause or an adjournment, the Russians work with their player who's on the board. Initially in the series, Beth is very individualistic. Have you seen these different approaches? And which approach works for you, individual or teamwork?

Look, I grew up in the Soviet Union, so it was not just working together during the analysis of adjourned games. But also, it's like shifting experience from one generation to another. That's why the Soviet chess school was unbeatable for several generations. And in America, the best example of individualism was Bobby Fischer. And while many believe that Beth Harmon was kind of the female version of Bobby Fischer, that's where their path separated because Fischer never accepted anyone's help, even when he played a world championship match. He was always very suspicious of anyone working with him. Beth Harmon's final success is based very much on teamwork.

One thing I want to ask you about: there are many scenes in which Beth Harmon is able to simulate chess matches in her head, seeing the board upside down on the ceiling. It seems really counterintuitive, but she zooms right in and knows what to do. The ability to kind of innately see this chessboard in your head — is that a skill common among the world's best chess players? Can you do it and play full chess matches in your head?

Oh, absolutely. Yes, of course I can. And many of us can. And that's very typical for top players. They can think about the game of chess even during the match by not looking at the board. Sometimes you need to reload your software. The whole idea of her you know looking at the ceiling or at the side and seeing the pieces and just turning them upside down. It's a great way of displaying some kind of chaotic thinking in the mind of the chess player. But it's very, very natural. It's an innate quality of top players.

There's also the presentation of chess culture in Soviet Russia in the series. In one of the last episodes, there's a scene during the matches in Moscow. There's a messenger boy who kind of comes out from the hall where they're playing the game to a crowd outside the chess hall. And the crowds are following the match really closely in real time. And the kid announces that Harmon has just moved the piece. She's surrounded by increasingly larger crowds of fans as she's winning. Is this all a fair portrayal of Russian chess fandom at the time?

Absolutely. Even when I played Anatoly Karpov during the mid-80s, we had huge crowds of people standing outside of the playing halls. But even at the big concert halls where we played that could bring in up to 2,000 people, that was not big enough to satisfy the demand. So that's why the big demonstration boards outside of the playing halls were quite normal in Russia, and the chess players were always treated with utmost respect.

It's based on fiction in the series, but what would have been the impact of seeing a young American woman flying into Moscow and taking down the country's revered grandmasters one by one? You said you were around four at the time, but can you imagine what that would have done in the 60s?

I cannot imagine what would go down in the 60s. But in 1970, '71 and '72, Bobby Fischer crushed consecutively all the top Soviet players, and it had a tremendous impact on Soviet chess. And I can tell you that most of the people I knew were rooting for Fischer, believe it or not. So I don't know what it was, this kind of protest against the system — or Fischer’s playing style, his energy, his dynamism. But Fischer had a massive, massive following in the Soviet Union.

So in the month or so since "The Queen's Gambit" came out, you’ve spoken with a lot of people about the show, about the series, but also more generally about chess, this game that you love that so many people around the world love. How are you seeing this new wave of enthusiasm for the game? What stories have you been hearing from around the globe right now in the wake of The Queen's Gambit?

Chess gained tremendous popularity over the last few weeks, and I hope it will be the beginning of a new boom, especially among girls and women. I think the story of Beth Harmon will be a great encouragement for parents and for talented girls to continue pursuing their goals in chess. And I can hardly overestimate the importance and positive impact of the series for the promotion of the game of chess worldwide. It's a TV series on chess that has been dominating Netflix in almost every country of the world.